A Bulgarian Adventure to Sofia & Plovdiv 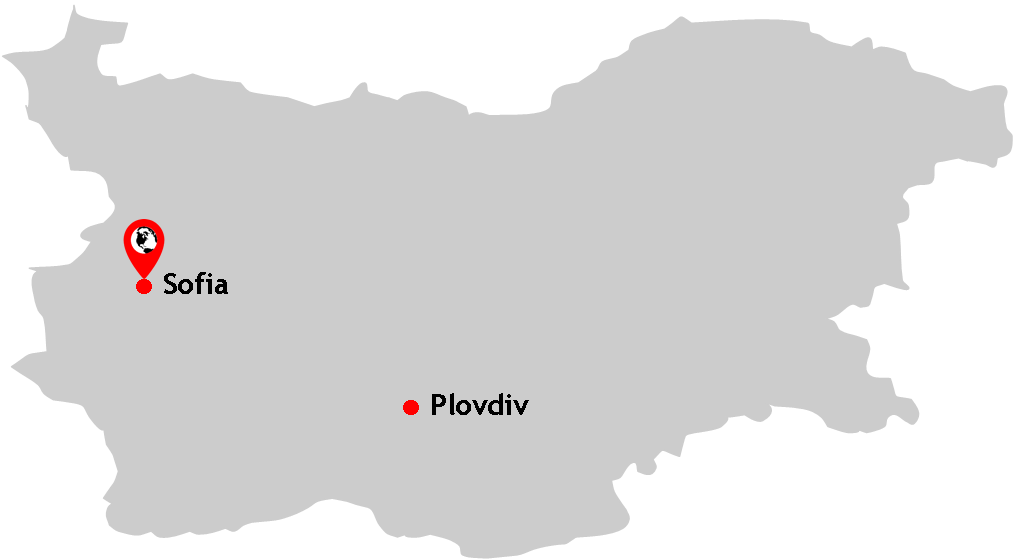 What things spring to mind when someone utters the word 'Bulgaria'? Do your eyes glaze over? Do you search for a symbol, landmark or historical event? Bulgaria was certainly an unknown quantity to me too and remained so right up until the moment I stepped foot on Bulgarian soil. It was to be one of those 'make it up as you go along' adventures. As a result, my visit to Bulgaria changed several times. The sticking point was what to do with a spare day having spent the first day and a half exploring Sofia, the country's capital. One half-formed idea was to visit a large abandoned UFO concrete structure sitting on Mount Buzludzha in central Bulgaria (I later made it out to Buzludzha in 2014 - see here). It would have been rather incredible to have seen it. The distance from Sofia, and the country's embryonic public transport system, meant that travelling to and from the site was not really possible. The only option would have been to hire a car and risk driving there. Thus, Buzludzha was reluctantly consigned to the box marked 'perhaps next time'. This was even more of a blow because Buzludzha was supposed to be the replacement option for what should have been a double country trip, one where we'd follow the well-trodden route from Sofia down to Skopje in the capital of (the Former Yugolslav Republic of) Macedonia. Further research determined that there would just not be enough time to tick off another of Eastern Europe's lesser-visited countries. We were left with the only viable alternative - a safe and simple trip southward to Plovdiv, Bulgaria's second city. Aside from a touch of 'Bulgaria Belly' on the first day, which luckily didn't develop into anything too nasty, most of the trip went to plan once the plan for the trip had been decided...

Bulgaria lies at a cultural crossroads between Eastern Europe and Muslim Europe surrounded, as it is, by countries such as Turkey, Romania, Greece and Serbia. The country also allied itself closely with the USSR when Europe was divided by the Iron Curtain (Bulgaria was never part of the Soviet Union but was Communist). Bulgaria, therefore, promises to bestow upon visitors a heady blend of the Mediterranean and eastern European. Indeed, this heritage is written in the faces of Bulgarians themselves: olive skin and bright blue eyes. Additionally, the heat makes Bulgaria feel like a Mediterranean country, whilst its dilapidation in places locates it firmly within the communist aesthetic of eastern Europe, as does the use of the country's use of the Cyrillic alphabet. This caused a real issue when we arrived in Plovdiv - there were three bus stations but we could not work out which one we had arrived at. Pathetically, like a real travel novice, I resorted to writing out the Cyrillic letters on my hand and trying to translate it in to Roman script and then cross-reference it to the map in the guidebook. Five minutes later, we were still none the wiser.

As regular readers of my site have probably gathered by now, I am often drawn to countries which have, rightly or wrongly, a poor international image. It is these kinds of countries which intrigue me and which, in my experience, have the most to offer travellers. I believe that every country has an interesting story to tell; no place is immune to the greater changes and events happening around it and so whether it is innately dynamic and interesting, or whether it is simply swept along by broader socio-political forces outside of its borders, countries cannot help but have a story worth listening to. Bulgaria is one such place.

Sofia is the Bulgarian capital with all the noise, dilapidation and gentle hustle and bustle this inevitably entails. Feeling like a cross between Kaunas in Lithuania and Belgrade in Serbia, Sofia was generally unkempt and dirty, but no more so than other eastern European nations. An architectural hallmark of Communism was the almost obsessive use (or should that be 'abuse'?) of concrete. The phrase 'concrete jungle' could have been coined here as everything seemed to be constructed of the stuff: benches, bins, statues, bollards, fountains and walkways. However, concrete degrades quickly and thus much of Sofia appeared to be crumbling all at the same time, like watching a city's destruction in ultra-slow motion. Indeed, the city's 1300 year monument in the main NDK Square, built in 1981, had been cordoned off to protect citizens sauntering by, not exactly a fitting tribute to the 1300 year anniversary of the forming of the first Bulgarian state. I find such grand gestures cheaply executed, a recurring motif of Communism, fascinating to behold.

One unfortunate by-product of Bulgaria's communist days is that it now struggles with poverty more than other countries in Europe. Whilst I haven't been to every country in Europe just yet, Sofia could possibly have some of the worst sidewalks on the continent. I wonder how many visitors head home having twisted an ankle - or both? My Sofia sightseeing was interspersed with flicking my eyes back to the pavement every few seconds to make sure I wasn't walking into a mangled piece of upturned iron or a cavernous hole from which I might never escape. Another sign that all is not well here is the prevalence of the homeless: whilst few in number, when I did see tramps and beggars in Sofia they looked particularly desperate.

If Sofia's crumbling concrete architecture is the city's body, then surely the incredible Alexander Nevsky Memorial Cathedral must be its soul. Its giant green and golden cupolas punctuate what is one of the largest eastern Orthodox cathedrals in the world. Amid a cityscape of largely functional architecture it is unsurprising that the cathedral is the undisputed landmark of not just the Bulgarian capital, but also of Bulgaria generally.

By extension, if Bulgaria's concrete buildings is its body and the cathedral its soul, then the former Communist Party House building in central Sofia is Bulgaria's memory and conscience. Sometimes the story of a place can be determined not just by what is there, but also by what is omitted, removed or missing. Indeed, there are some in Bulgaria doing their very best to erase the country's past mistakes - and this endeavour is written, more specifically not written, on the capital's buildings. The red star, ultimate symbol of communism, which once adorned the central column of Communist Party House has been removed, unceremoniously dumped in an abandoned indoor pool. By the same token, the hammer and sickle relief rendered in stone above its entrance has been chiseled away. To complete this historical deletion, all Lenin busts and statues have been removed from public spaces. It is a fair assessment to say that Bulgaria is dealing with the mistakes of its past...by pretending they never existed, an exercise in collective amnesia where the symbols and icons of communism too difficult or unsettling to bear witness to are vaporised in a unified act of forgetting.

However, a recent addition to the Sofia tourist landscape is the Museum of Socialist Art, the final resting place for many of the now unloved and unwanted communist statues and symbols dismantled following the country's troubled and difficult transition to a market economy. Even though these are merely statues, a wander around this place feels like a visit to Bulgarian communism's own graveyard, the final resting place of a socio-political that was destined to fail. Visually, the museum adopts the visual traits of a graveyard, with each statue given its own grey stone plinth, respectively laid to rest amid a field of green .

Ironically, or befittingly depending on your politics, the open-air area of the museum is overlooked by a large modern building occupied by the banking group 'Fibank'. Positioning yourself with your camera pointing at an impressive statue of Lenin, it is just possible to photograph both together; a symbolic juxtaposition of both systems within the same frame. The huge red star top, which once adorned Communist Party House now stands at the entrance to the museum - no longer looming large over citizens from the city's most prominent building, rather, but cut down to size. Literally and metaphorically. 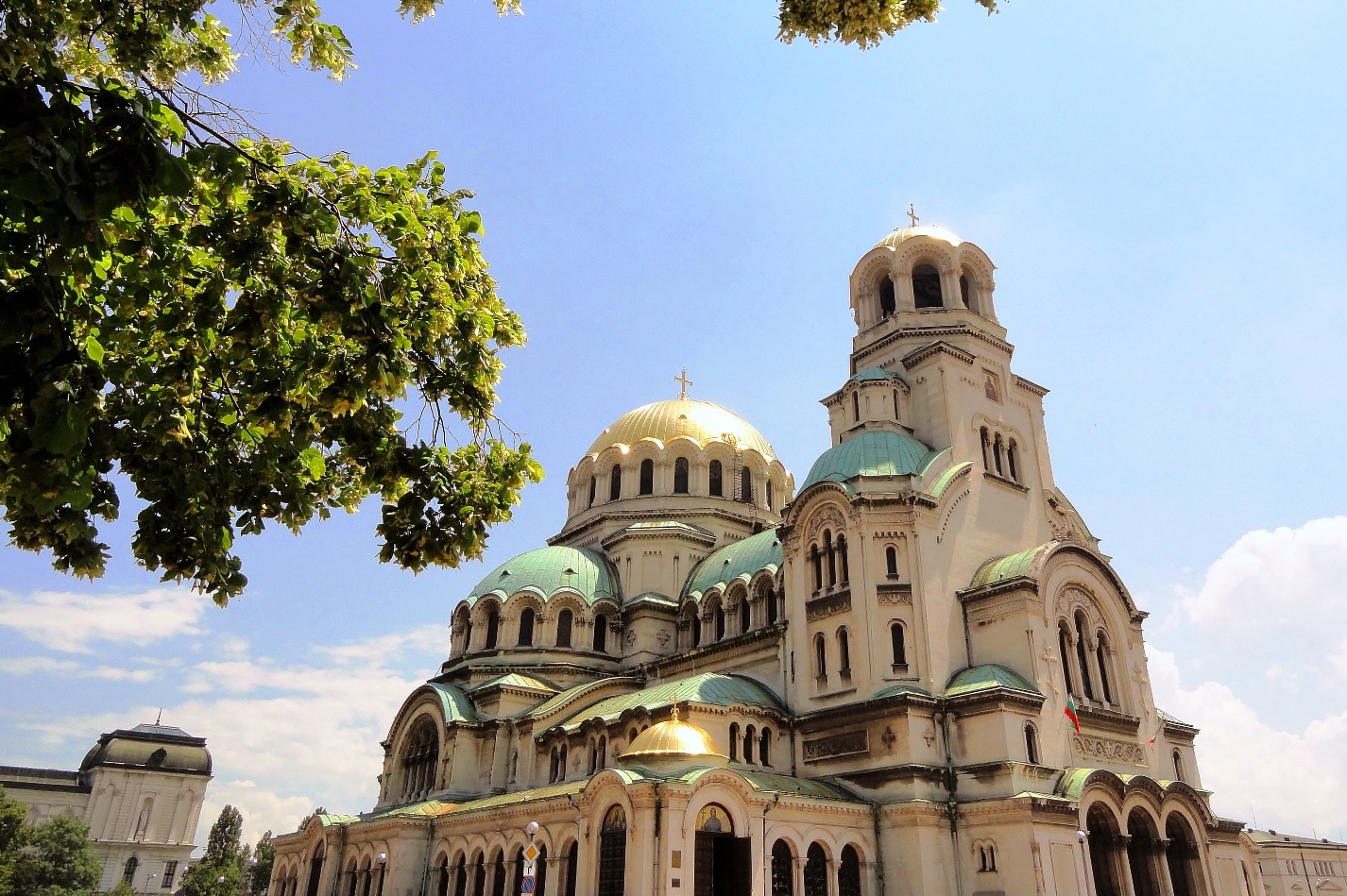 The green and golden cupolas of the Alexander Nevsky Memorial Cathedral, Bulgaria's undisputed landmark building. It is one of the largest eastern Orthodox cathedrals in the world. 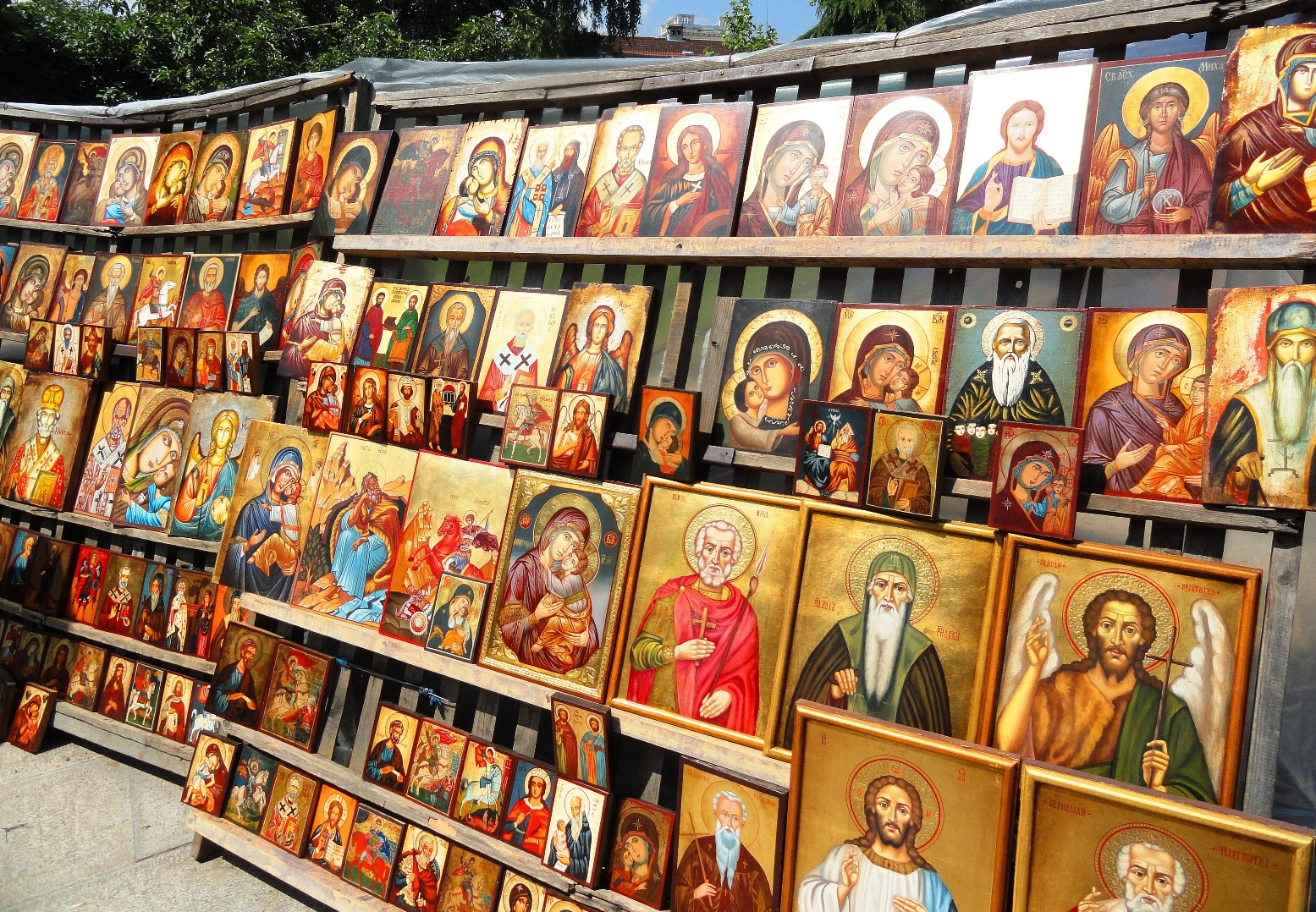 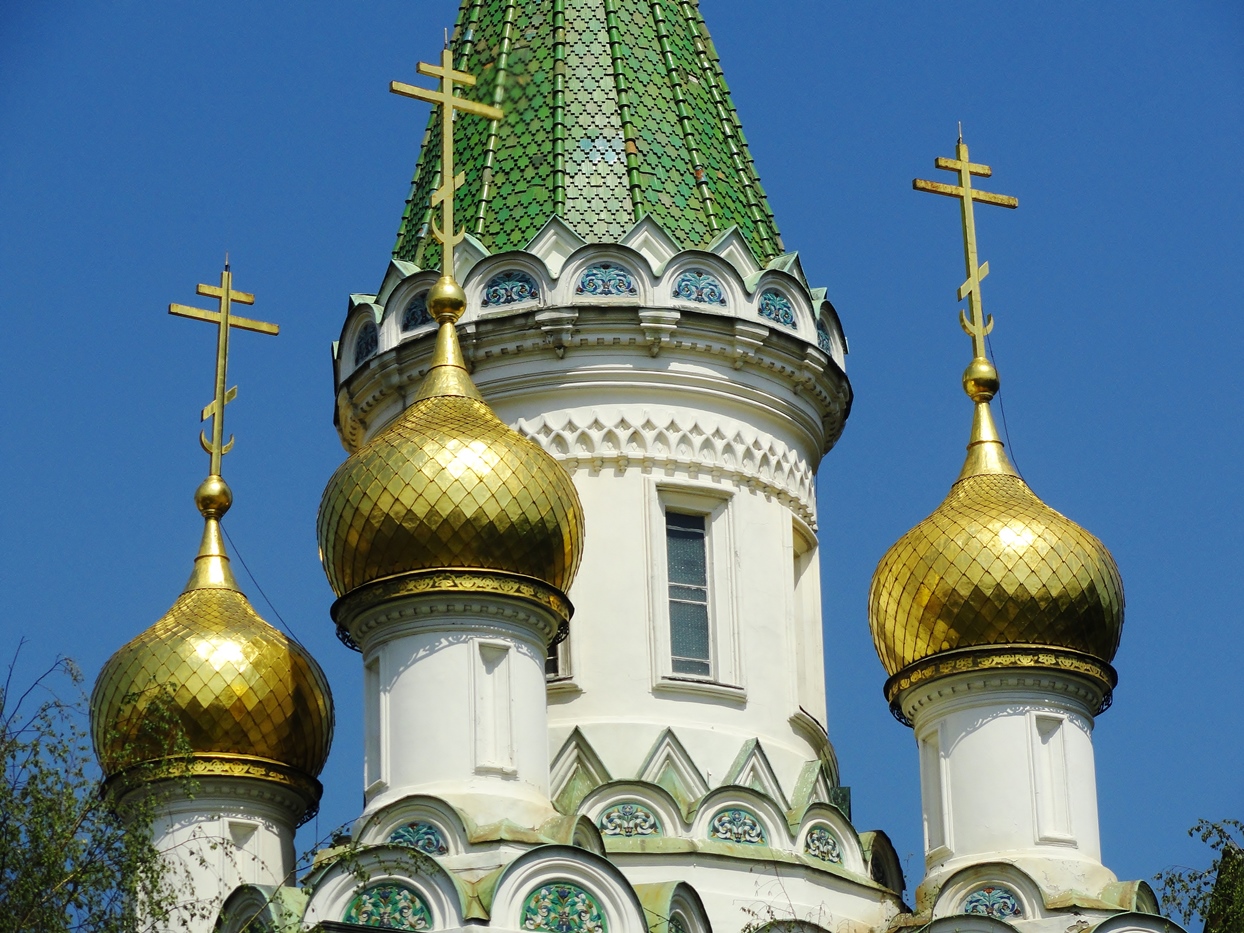 The St Nikolai Russian Church in central Sofia whose golds and greens mimic those of the Alexander Nevsky Cathedral nearby. 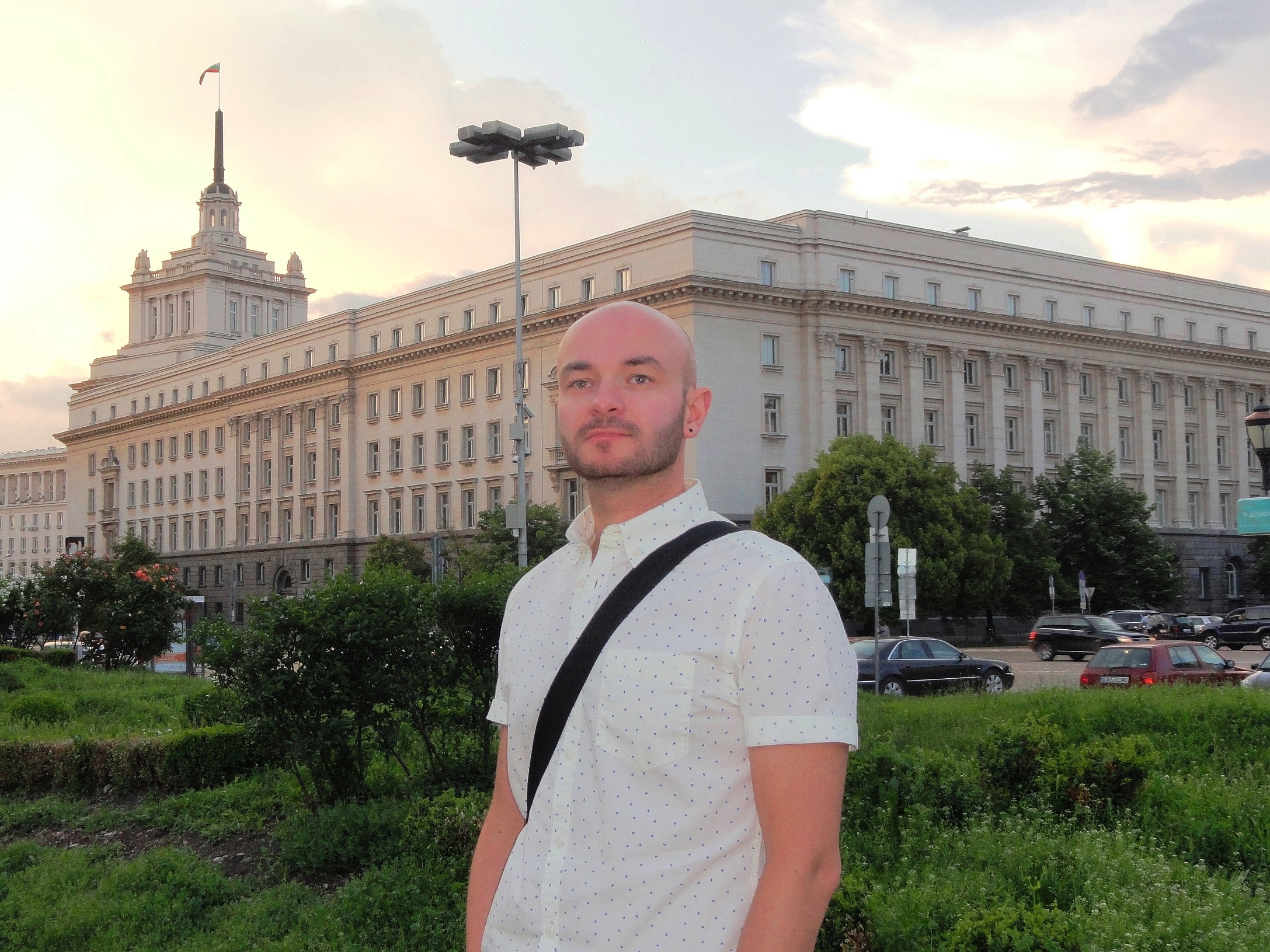 The former Communist Party House, former headquarters of the Bulgarian Communists. Its red star has long been removed and replaced by the Bulgarian flag. The building's design imitates key characteristics of the Stalin Palace. 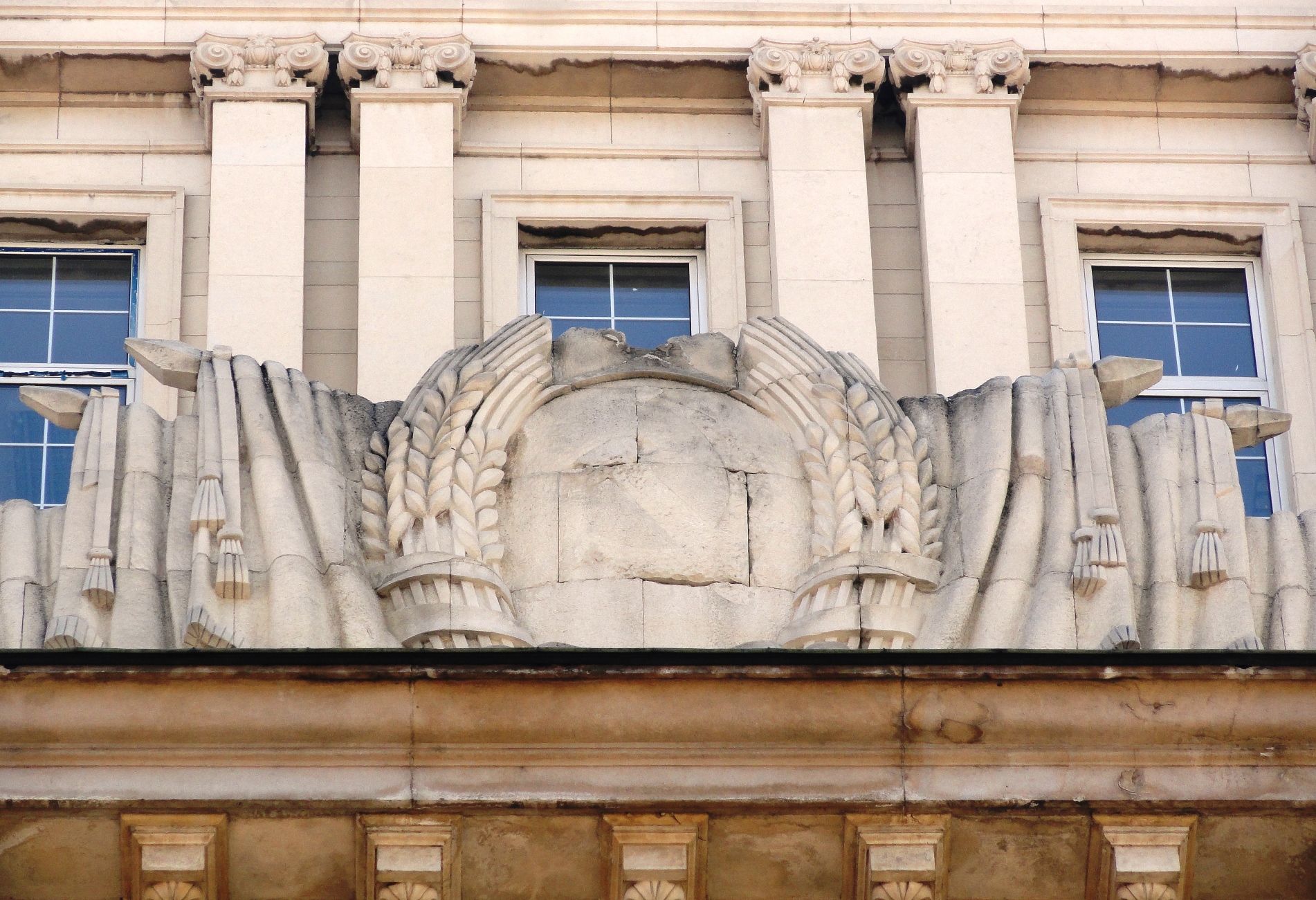 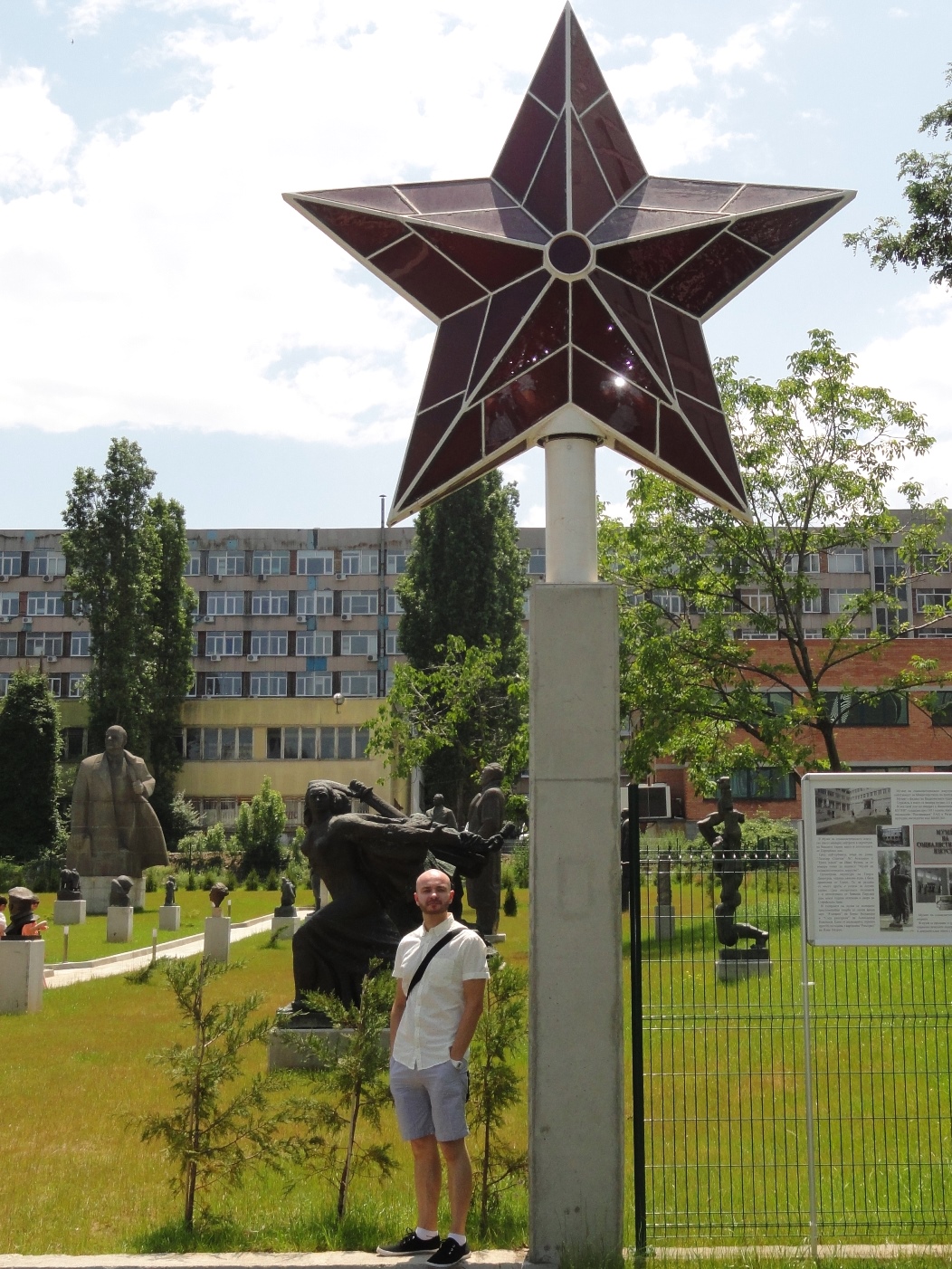 Bulgaria's collective amnesia: the hammer and sickle symbol has been removed from the former Communist Party headquarters building. Right, the red star cut down to size and now at the entrance to the Socialist Art Museum. 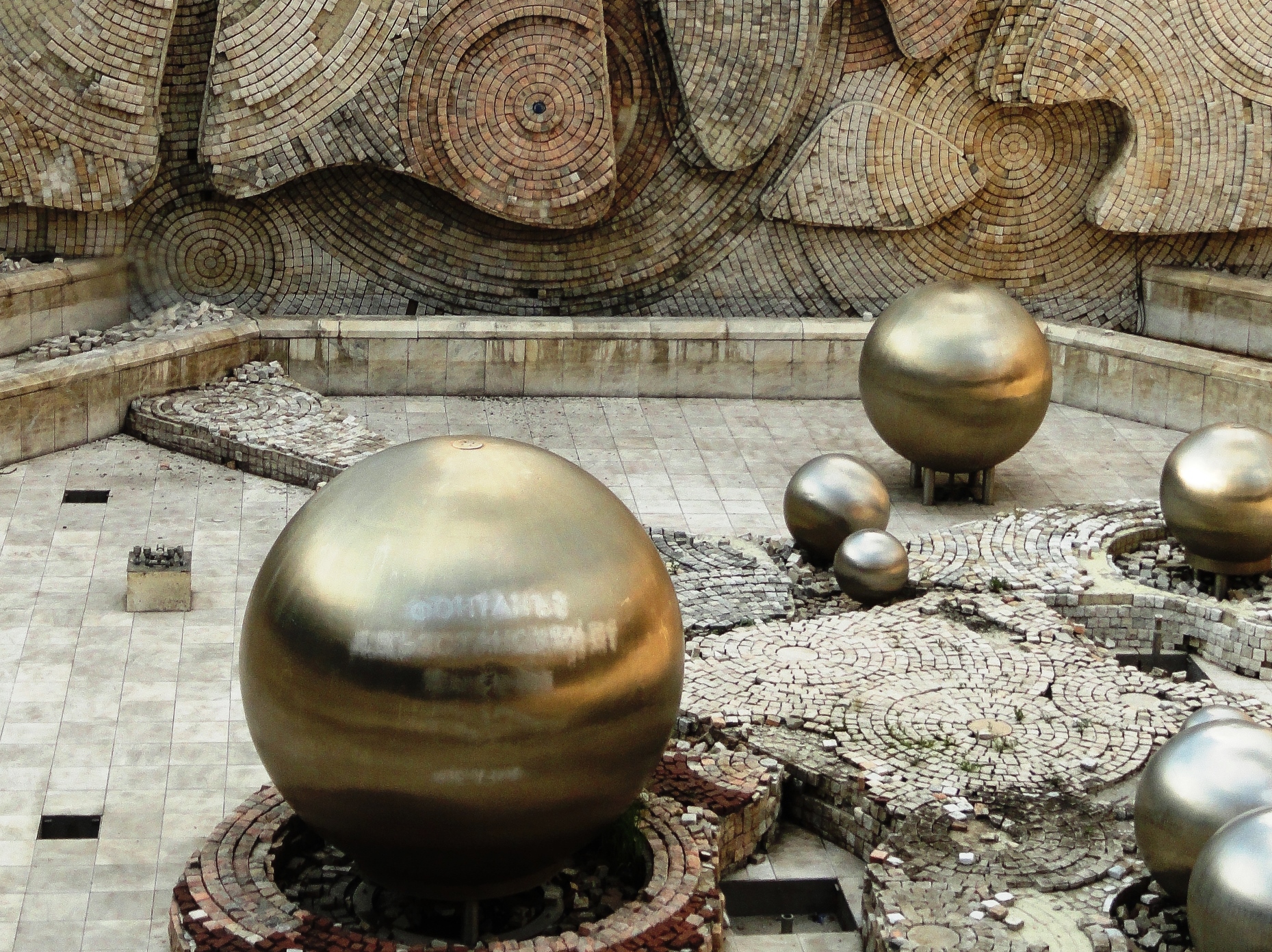 The eastern European aesthetic: this fountain may be devoid of water but its cosmic globes, beige colour and mosaics are key traits of communist design.

Plovidv just goes to show that you should never try to second guess a second city. We travelled from Sofia to Plovdiv by local coach. The journey was rather unremarkable, except for the geographical punctuation marks of the Sredna Gora Mountains and Valley of the Roses. Plovdiv was a real departure, pun intended, from my experience of Sofia; Plovdiv was cultural and the tourism market positively fizzed and popped. The revivalist architecture, characterised by organic swirls and flowery details, was in stark contrast to the functionality of Sofia's concrete communism. Here there was a focus on the ornate, the delicate. In Plovdiv, things can exist simply because they are beautiful; they do not need to justify their existence by having a function or purpose. The ornate detailing on buildings in the historic area of the city are there because they can be. It's as simple as that. It's just as well that I took the trouble of travelling the 130km from Sofia to see them and to see Bulgaria's 'other face'. 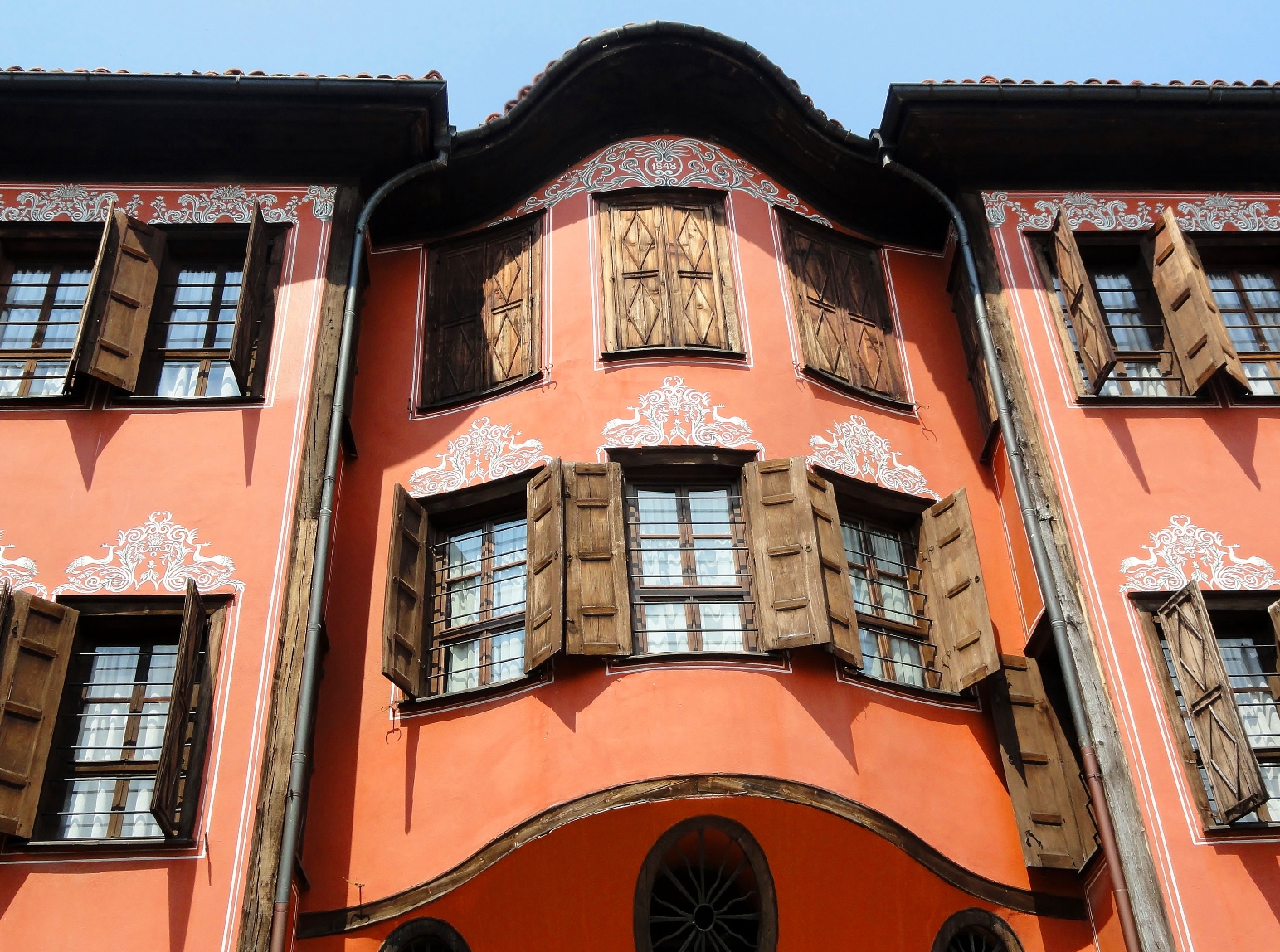 The floral and ornate patterns of buildings in Old Plovdiv. 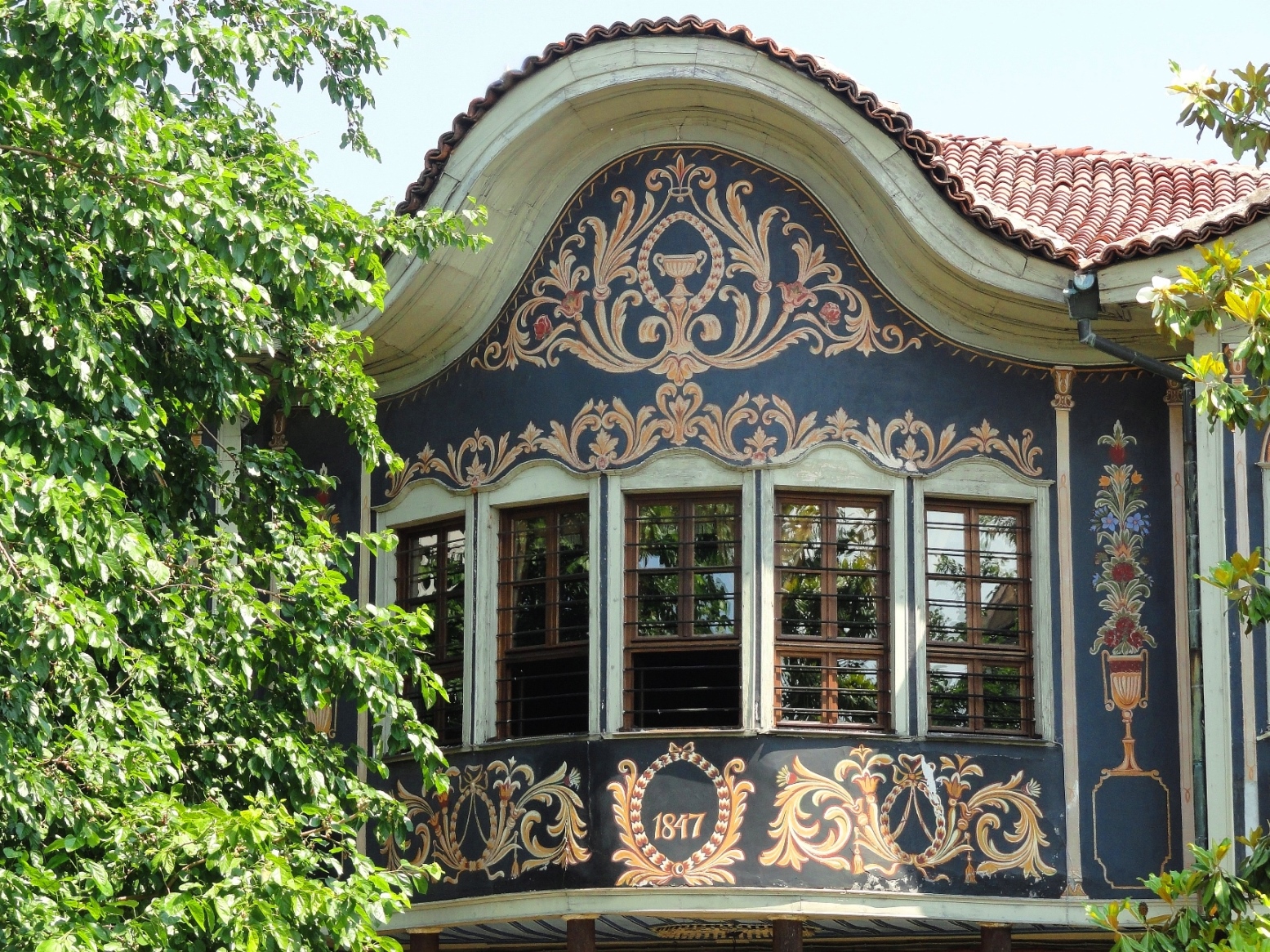 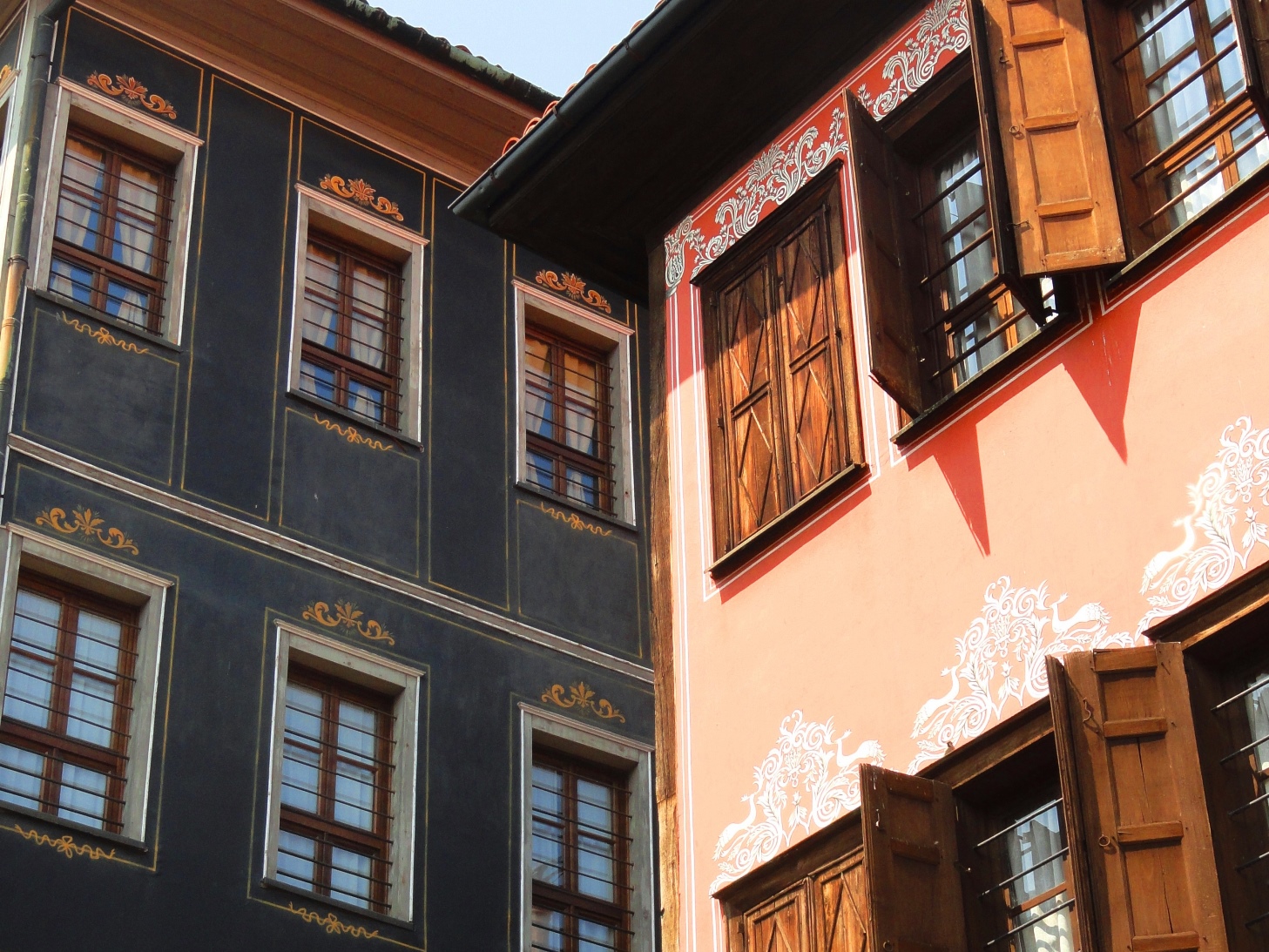 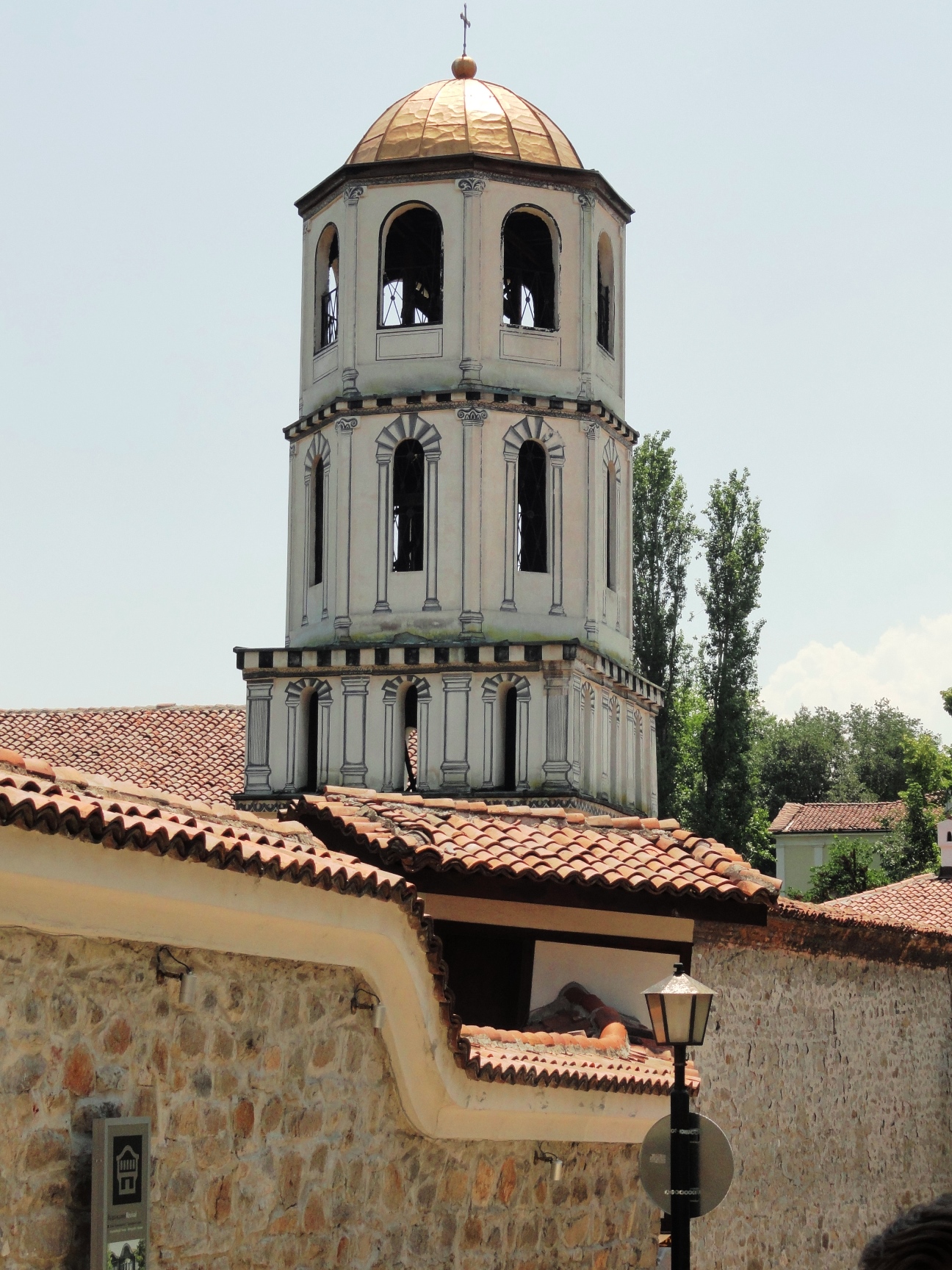 The Bell Tower in Old Plovidv. 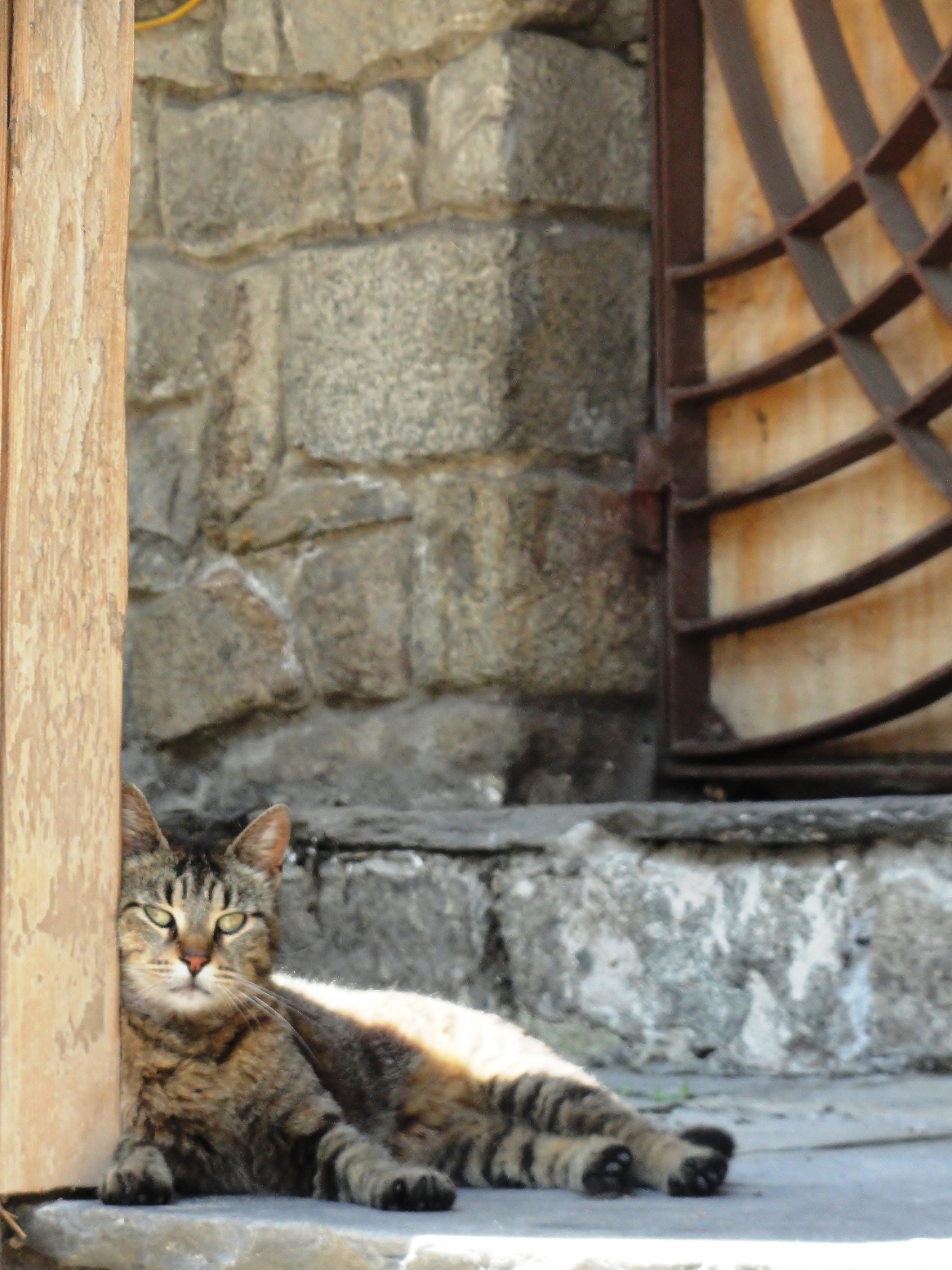 A contented cat shelters from the sunshine in Old Plovdiv.