A Triple City Adventure Around the Baltics' Southernmost Country 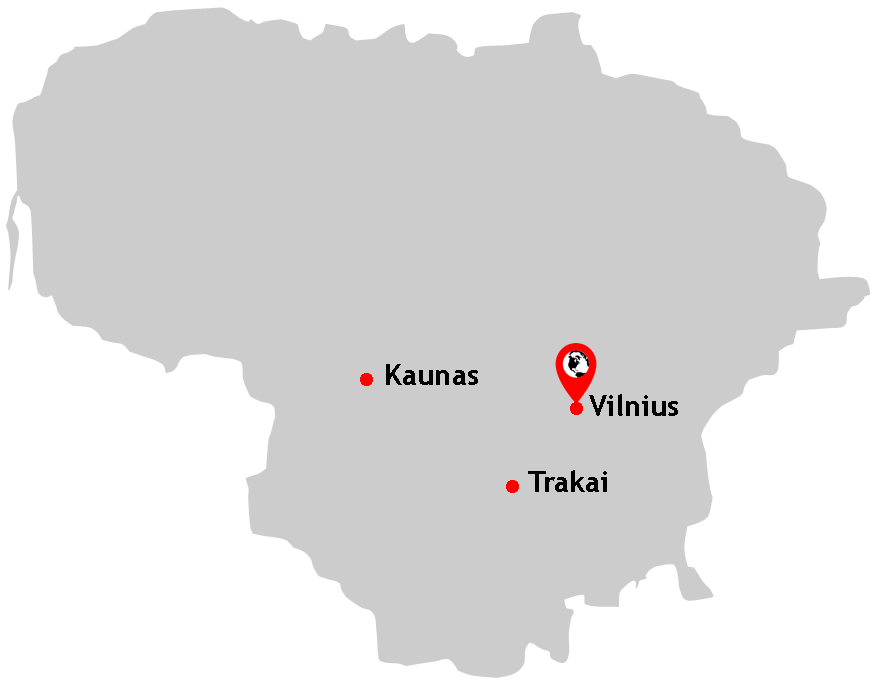 Lithuania was the first USSR satellite country to try to break away from the union, and has been credited with causing the collapse of Sovietcommunism and the tearing down of the Berlin wall shortly after. There are some parallels with Tunisia and the Arab Spring here. Indeed, in typically restrained protests arguably characteristic of the Baltic region as a whole, two million people linked arms against Communism stretching from Tallinn in Estonia to Vilnius in Lithuania. The USSR collapsed the following year. For these reasons, Lithuania is well worth a visit.

Setting off from Liverpool Airport with its yellow submarine - which has you humming the tune all day, we got up at 4am and dared to use Ryanair - a two hour flight sat next to a large drunk Lithuanian who arrived having had a skinful and who proceeded to burp his way through three cans of Heineken on the flight. The flight was to Kaunas, Lithuania's second city, but we'd booked our place on a shuttle bus to take us directly to Vilnius. Lithuania is a good trip providing you are prepared to travel outside of the immediate area to see the things of interest. Food is ridiculously cheap. It is a place with a contradictory mix of fatalism and optimism. Older generations wear a communist beige: beige trousers, shirts, even shoes. Like many a European country, younger Lithuanians embrace a more modern attire.

Torrential rain greeted us in Vilnius; the weather from the north west had clearly travelled with us. A most bewildering spectacle was the hundreds of folk music fans in the city - country bumpkins in traditional garb - a cross between barn dancers and Morris dancers. This being our first few hours in the country we thought this was 'what Lithuanians did', only to discover later that we had arrived in the middle of the 'Skamba Skamba' festival. Despite being the capital, Vilnius felt very provincial. A visit to the city's TV Tower kicked off our second day on Lithuanian soil - negotiating the city's drab and clapped-out, yet efficient, bus network to get to the Karoliniskes district of the city, 3km outside the city centre. It was a part of the city where I began to see just how far Lithuania needs to go to get into the modern world. We were greeted by blackened concrete tower blocks with collapsing balconies and graffiti. 'Lawns' were overgrown and covered in weeds. This was Lithuania at its most Soviet.

Eclipsing all of this dilapidation was the Boksta, or tower, which thrusts some 326 meters into the sky. State sponsored architects drew their inspiration from the space race with America, one of the few areas where Russia and America were on an equal footing. It was a strength that would result in some amazingly bizarre cosmic constructions across all republics of the USSR. The tower holds an oxymoronic place in the Lithuanian psyche being a classic symbol of USSR occupation but also the scene of where Lithuanians fought for freedom against Soviet tanks, which were sent in in 1991 to take control of broadcasts. Fifteen Lithuanians laid down in front of the rolling tanks at the foot of the tower. The tanks simply rolled over them. Mindful of how this carnage was playing out on the international stage, Gorbachev pulled back and left the Lithuanians to their freedom. A series of crosses and a marble memorial can be seen at the foot of the tower commemorating those that died in the Battle for the Boksta.

The tower itself is classic communist - a construction designed to wow and show off the technological prowess of the USSR. We got the lift up, some 190 metres high, to go to the 'Milky Way' observation bar, which afforded us 360 degree views of Vilnius. For the best part, much of the buildings were tawdry apartment blocks of the Soviet Gothic kind. Stranger still was the 1980s-style decor in the bar coupled with the fact that the floor revolved - but not without the mechanics making it clearly obvious to everyone that it was struggling to work. We took in a coffee and watched the city rotate by. In the distance we could make out what must be one of the largest and most monstrous Soviet era housing estates on a hill just outside the city centre. It was a sight that was to repeat itself when taking in city views of Kaunas. 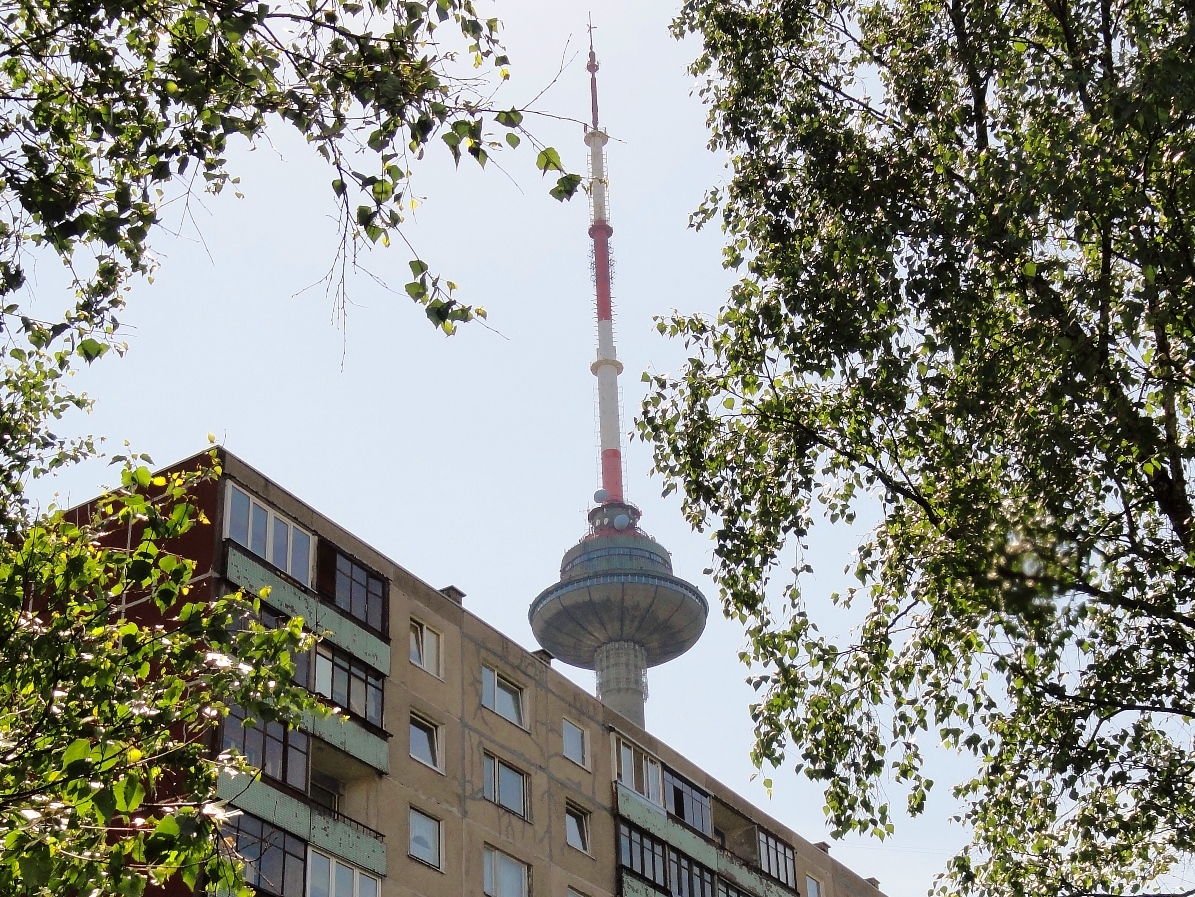 Vilnius at its most Soviet: the television tower dwarfs a Soviet-era tenement building.

A Socialist Realist statue on the Green Bridge crossing the Neris River showing Construction and Industry. These are the only Communist statues left in the city. There are two theories as to why they remain. One, that locals liked them too much to let them go the way of all of the other communist statues. Two, to give Lithuanians a laugh as they commute over the bridge on their way to work.

Trakai was formerly the hub of political and military power in Lithuania, comprising most famously a red bricked castle on an island on Lake Trakai. It was rebuilt in the 1980s from more ancient ruins in contravention of Soviet orders not to; a pleasant beauty spot meets symbol of national resistance. Going on a pedalo around the lake in the sun was a good way of seeing all sides of the castle. Other parts of Trakai were picturesque enough, with traditional wooden fishermen's housing which looked more like chalets with tin roofs. Others, like the bus terminal were depressing and seedy. 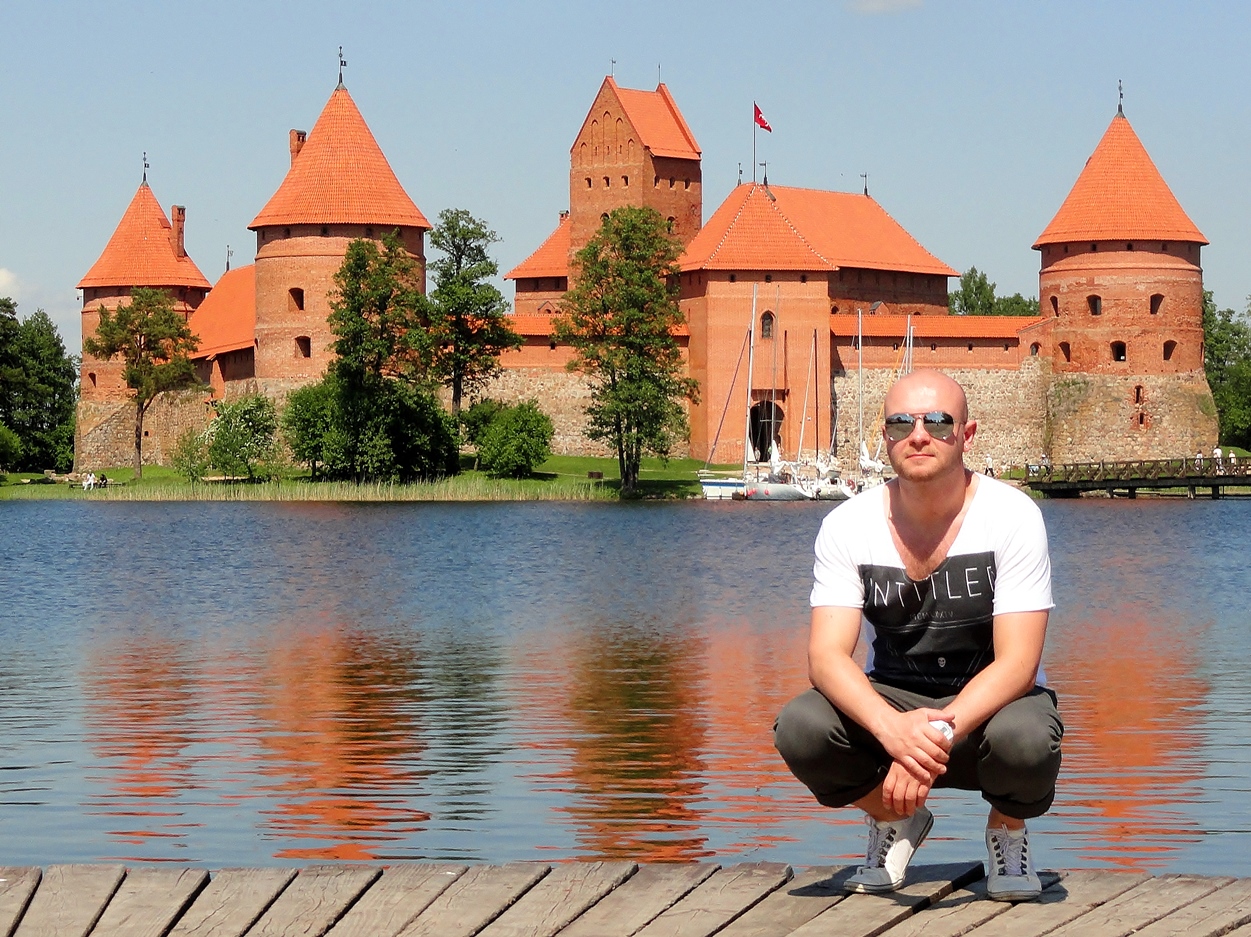 Trakai castle and lake. The castle is widely regarded as the symbol of Lithuania. Indeed, it is the main photograph used on my 'Baltic States' Rough Guide covering Estonia, Latvia and Lithuania. 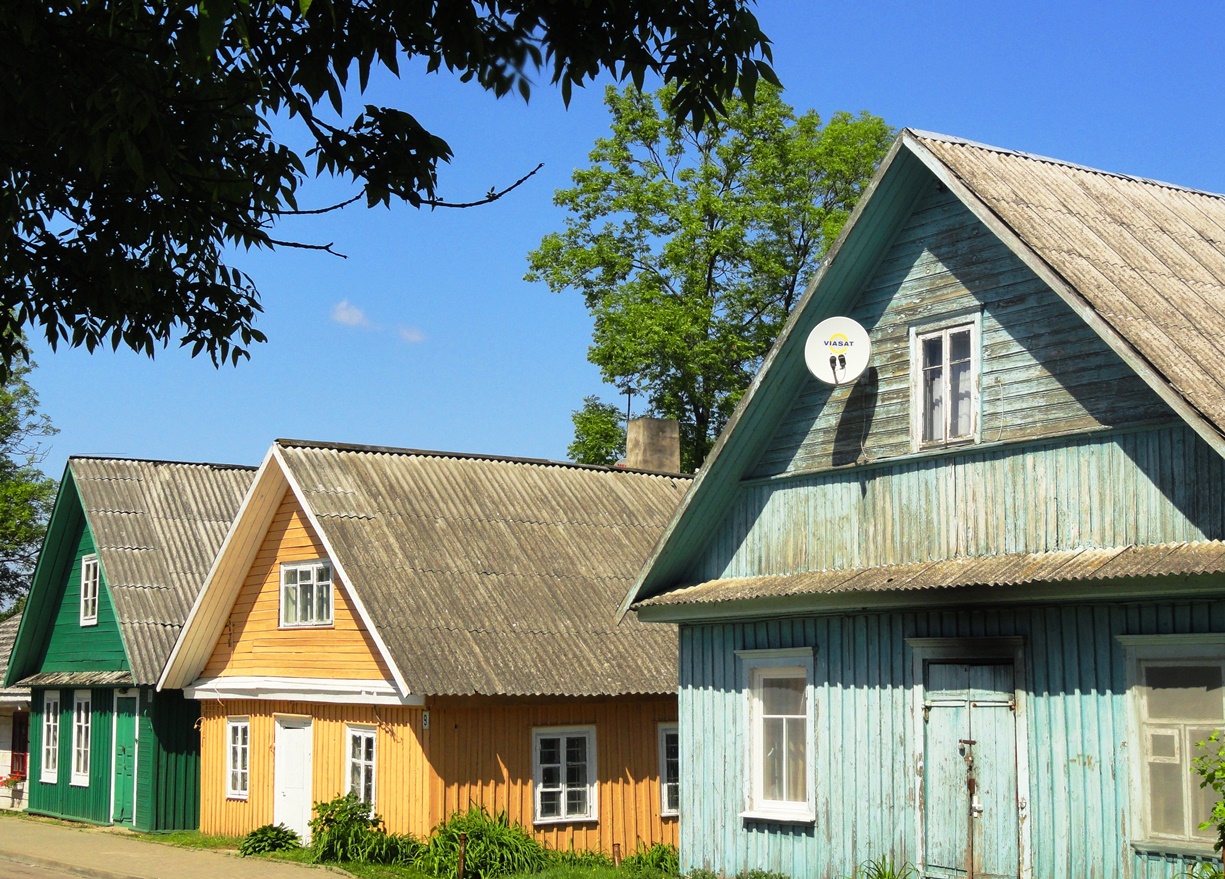 Traditional pastel-coloured fishermen's cottages in the area of Trakai known as 'small town'.

We spent our last Lithuanian day in Kaunas, a transitional capital used in times of national emergency and Lithuania's second city. Kaunas was fairly unremarkable - but pleasant. No wonder people take the cheap flights to the city and get a shuttle bus straight to the capital Vilnius. One of the highlights was travelling up to the observation terrace of the Church of the Resurrection, which gave us some rather great views of the city on a lovely sunny day. 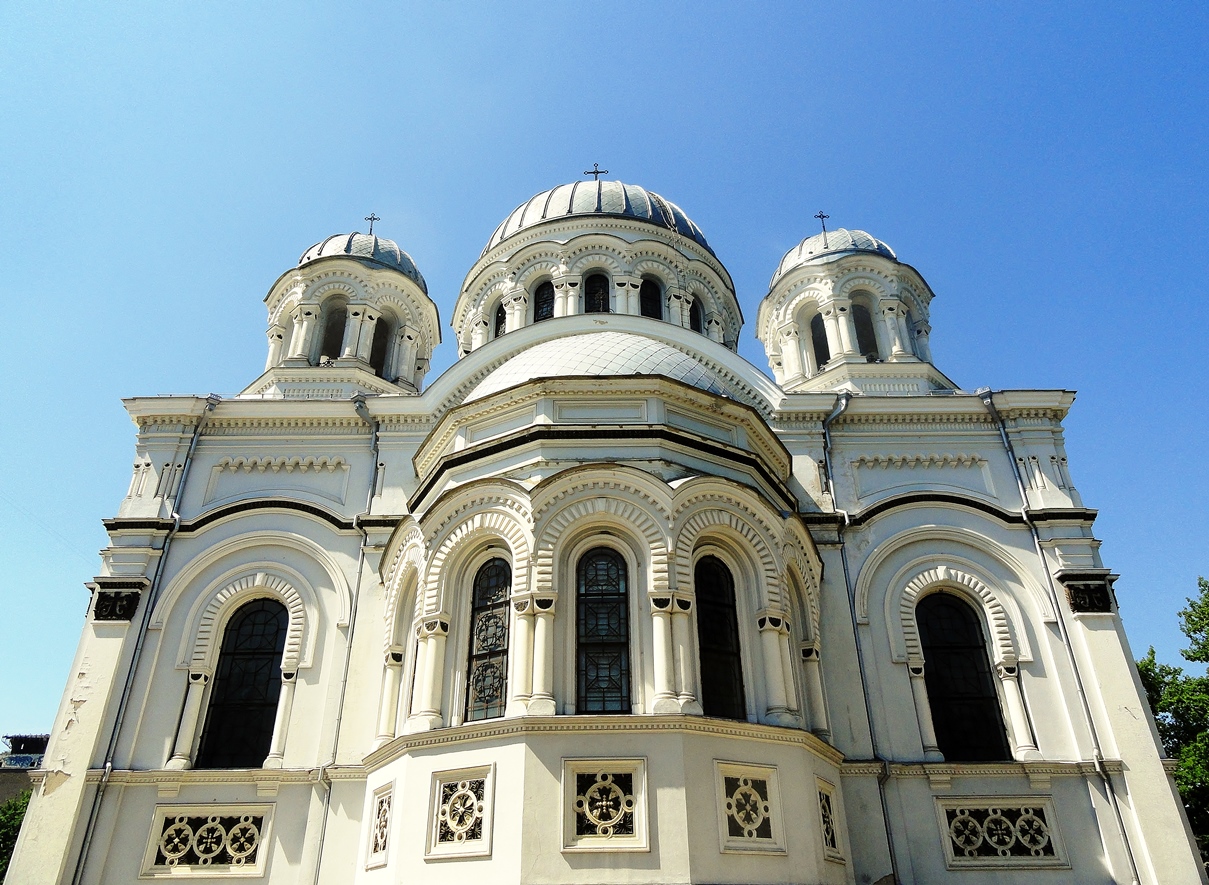 The Neo-Byzantine styling of the St Michael the Archangel Church.