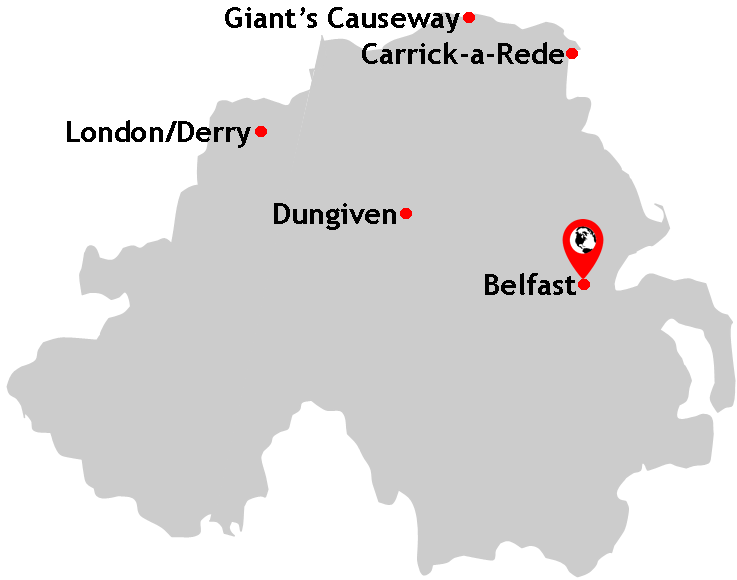 This was my second visit to Northern Ireland, having made a botched attempt to see the place many years back, armed with two drunken friends, a bad cold and a very cheap camera. We never made it outside of Belfast and only managed a quick tour on a city sight-seeing bus before heading back to Yorkshire. This visit was about setting the record straight, seeing what I had missed and heading outside of the obvious lure of the capital Belfast. Cheap flights from Manchester with Easyjet convinced me to give NI another chance. Whilst the new Titanic museum along the banks of the Lagan River was not a draw, the chance to see the Giant's Causeway along the northern coast was. So, set with a shopping list of things to see, which included a proper tour of the murals in Londonderry and West Belfast, as well as Stormont in East Belfast, the only way forward was to rent a car and travel in comfort. The weather on day one made us very glad that we had taken this option.

Northern Ireland is fighting back against its reputation as a troubled place of bombs, violence and religious intolerance. Indeed, Belfast was considered to be so unattractive as a city break that it became one of the 'Three Bs' to steer well clear from: Beirut, Baghdad and Belfast. The transformation from troubled isle to tourist destination is certainly not absolute. Bold strides earlier on have become slightly more tentative in light of a recent resurgence in bombings. Whilst evidence of sectarian division and violence is to be frequently seen across Northern Ireland, the place also has a few key attractions to draw you out of the main Belfast hub. The Causeway and rope bridge at Carrick-a-Rede are intriguing enough for a slightly longer stay in the country. To miss these things, like I did years ago, is a shame. It is ironic, also, that Northern Ireland's troubles over the last five decades have added to its allure for a hard-nosed band of mural hunters travelling to see Free Derry Corner in London/Derry. The scores of murals in West Belfast also draw in the tourists on 'Black Taxi Tours'. Sometimes the most interesting things to see are the unrefined and the edgy. Belfast has this in spades. Something else it seems to have in spades is friendliness; what you expect to be brief conversations with locals about where to eat are minutes rather than seconds long. It was one of the friendliest places I have visited, putting it on par with Canada. This may surprise many, whose first impressions of Belfast are of dividing walls between Protestants and Catholics and violent-looking murals with balaclava-wearing, machine gun-holding soldiers. It's an odd contradiction to get your head around, but local friendliness soon allays any trepidation you may have about the safety of the place because of the violent scenes depicted in the media or on the city's walls.

If visiting Belfast, it is advisable to open it out from being merely a city break, to taking in some of the other things on offer. For £16 a day you can hire a car and go wherever you like - probably cheaper than travelling on public transport and, in May, a damn sight warmer too. An added bonus is that you can take in some local colour, as well, by dipping in and out of local NI radio (Downtown FM? Citybeat? or perhaps something from over the border in Ireland like RTE1?) Whatever you do, don't leave too late to get to the airport like we did - and then have to pay for another flight. Leave in plenty of time. Also, don't leave filling up your hire car for the final drop off until the morning of your flight - a curiosity of Belfast and its environs is that trying to find a petrol station that was open at 5am was impossible. We had to hand over the car with a half-full tank and, no doubt, will have our credit card duly punished. Another curio I was not expecting was that Ulster bank issues its own unique pound notes; the cash machines spitting out odd-looking currency. I did need to double check these were pounds sterling. Still, this is what I saw and did when we went Driving Ulster.

Belfast isn't just a city - it feels like a true capital city with its immense buildings, architectural grandeur and wide boulevards reminiscent of trips to Glasgow and Edinburgh. It does, however, feel like it is missing something. An iconic landmark, possibly? Belfast City Hall and key educational buildings help to cut impressive shapes on Belfast's cityscape. This grandeur is juxtaposed uncomfortably with grim-looking murals with violent imagery.

There was a buzz around the site of the new Titanic museum - built next to the old shipbuilding yard slipways which constructed the ill-fated RMS vessel. The huge H&W yellow cranes still loom large on the skyline, eclipsing the £77m attraction. Directly next to the new museum were the little, inauspicious offices where the Titanic was designed. It all felt a little inappropriate - especially having a gift shop selling tea towels with the Titanic hull emblazoned across it. I'm not sure I would want to do the washing up with a tea towel which recalled the deaths of hundreds. Titanic Belfast can be seen as an extension of the Dark Tourism industry - tourists' mawkish interest in the ill-fated and deathly. I, on the other hand, preferred to buy a coffee and take photographs of the building itself - designed to replicate the shapes of Titanic's hull as well as the jagged nature of icebergs. Still, if marketing this kind of thing gives Belfast people jobs and regenerates a large part of the city, then so be it. 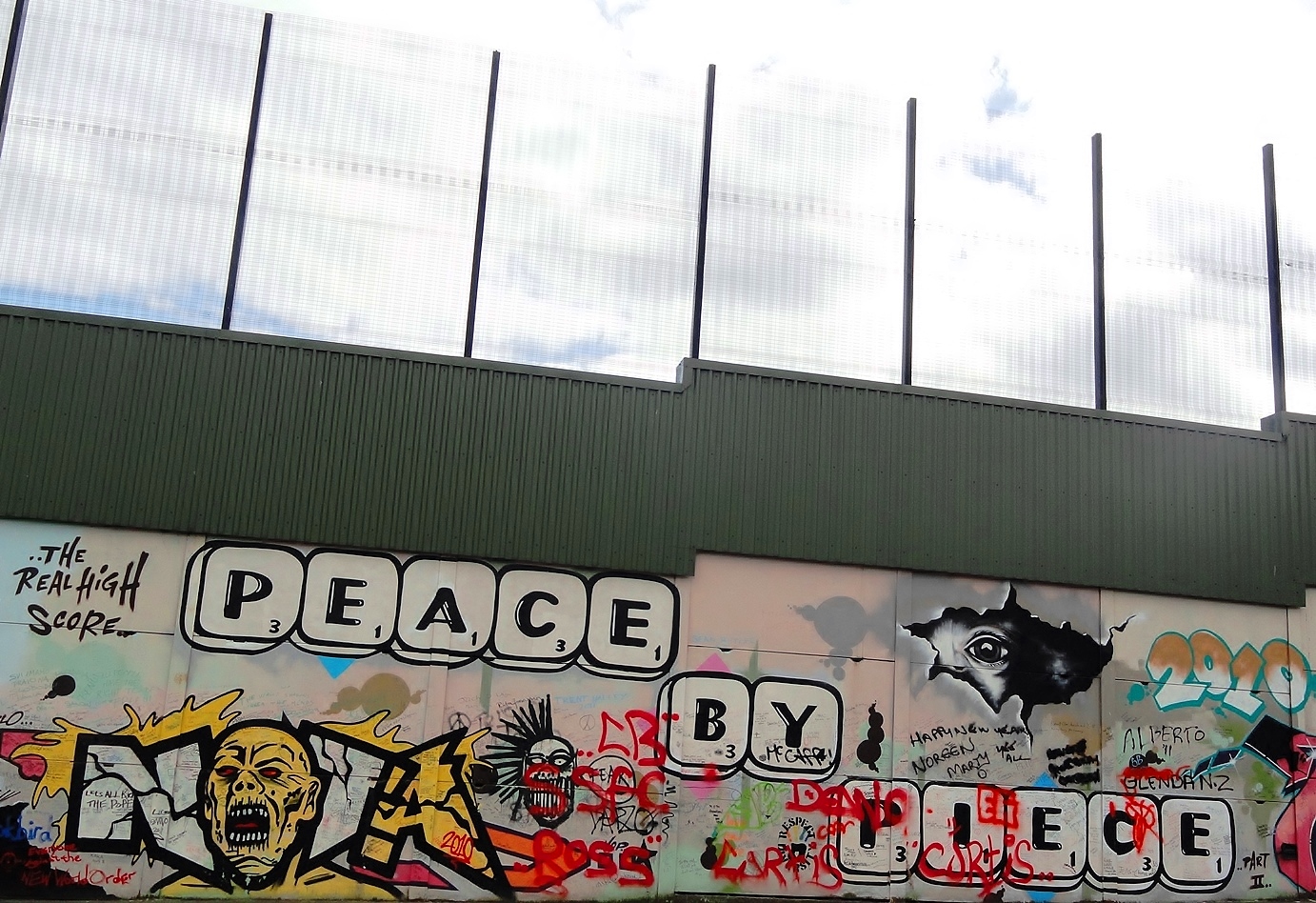 The Peace Wall in West Belfast which separates Protestants from Catholics and thus Unionists from Nationalists. The wall, perhaps unsurprisingly for a country which spawned the murals approach to protest, has become a canvas upon which to write and theorise. 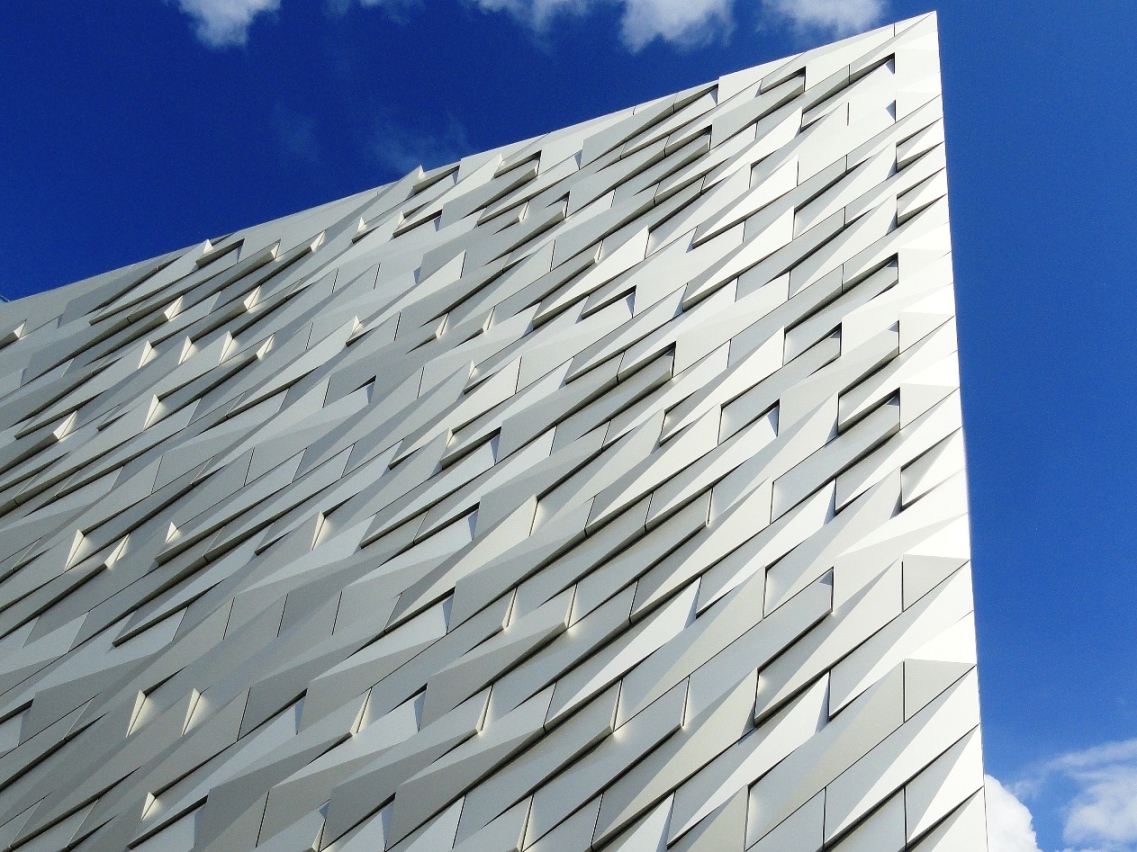 The Piece Du Resistance of Belfast's burgeoning new tourist industry - a shot in the arm which, during our visit, seemed to be having the desired effect. Tickets were sold out and there was a queue to get into the Titanic souvenir shop. The building was very difficult to photograph; the building deliberately set at awkward angles and irregular shapes - iceberg-like. 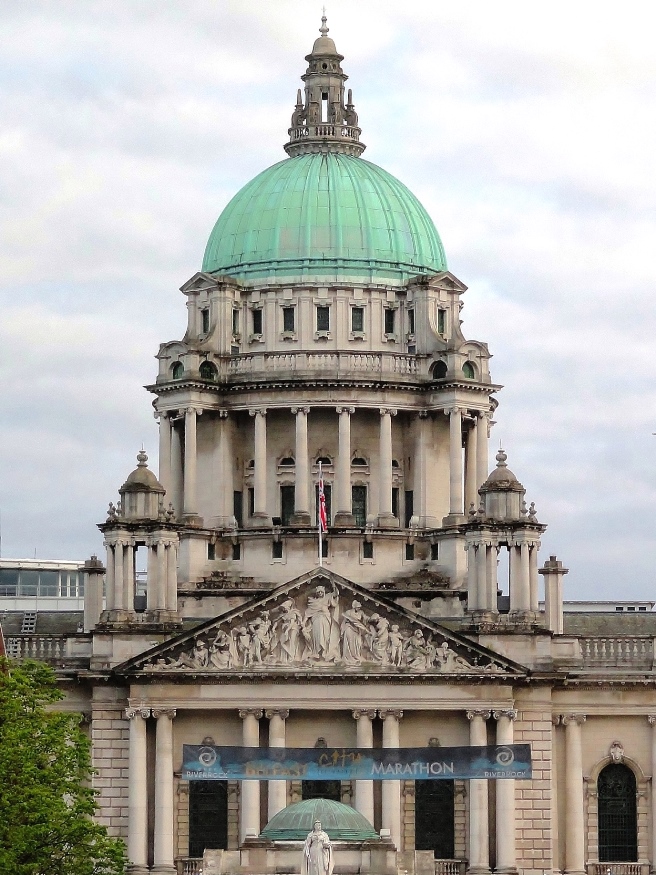 Belfast's architectural grandeur and immense boulevards are befitting of a capital city. At the end of this boulevard is Belfast City Hall. 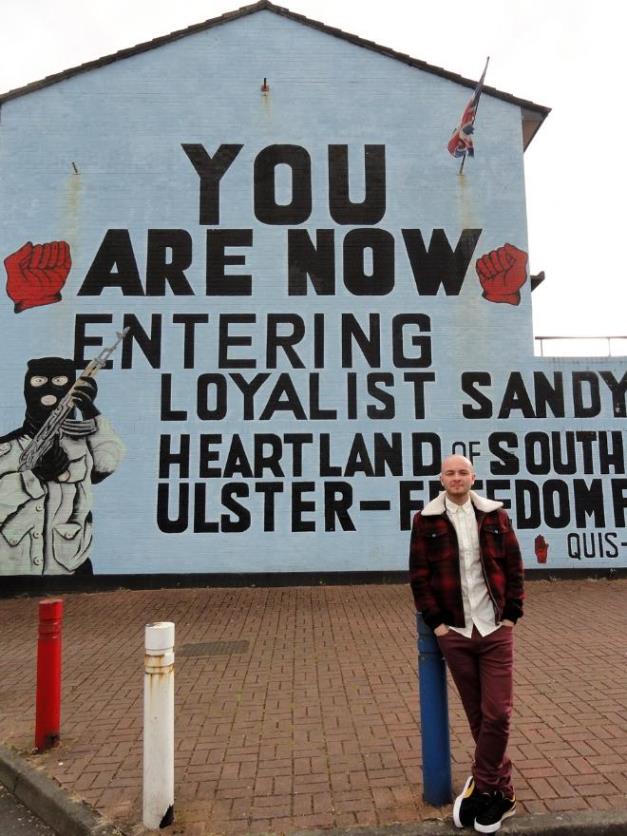 A mural directly outside our hotel in central Belfast, typical of those you will see around NI. This one is Loyalist, hence the Union Jack-coloured bollards.

the city with two names

London/Derry is known as 'Stroke City' owing to the slash that many writers (including me) put between the word 'London' and 'Derry' for reasons of political correctness. The name 'London' is highly charged. Using it betrays your religion and political affiliations. The name is so controversial that motorway signs, for miles around London/Derry, are interfered with, often removing the word 'London' with daubs of paint. London/Derry is also home to some of the most iconic and powerful murals in the country - it being the flashpoint of so many of Northern Ireland's troubles. The collection of murals, dubbed The People's Gallery' are clustered on humble buildings around Derry Corner, known as Free Derry Corner. We were not the only people out that day with cameras touring the murals. There were also tour guides - often the people who painted the murals themselves (known as the Bogside Artists) - taking tourists around the murals and explaining their message. The murals in the People's Gallery are repainted periodically.

What's in a name? There are worrying signs of discontent as you enter London/derry. Unionists call the place Londonderry, Nationalists call it Derry. When in Rome, call it Derry or face upsetting someone. People living close to London/Derry clearly object to the word 'London' and remove it from all accessible road signs. One sign had 'London' blocked out with white paint, and 'Derry' blocked out in blue - some people objecting to either word - a sign of the irreparable differences which exist in this part of the world. Lamposts, also, do not escape this highly-charged marking of territory. The Union Jack colours on one signalling Loyalist territory, the RoI colours signalling Nationalist territory. These two posts were only 100 metres apart. Some also have flags on their tops. 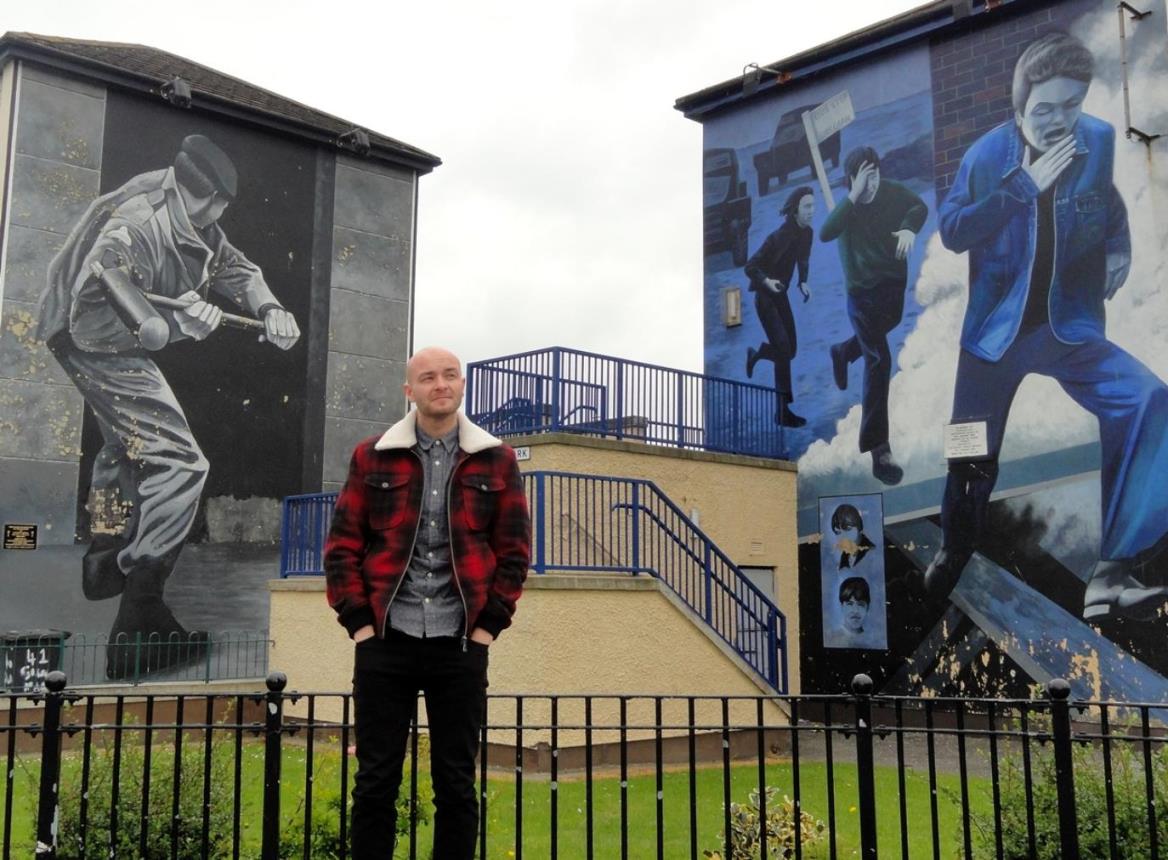 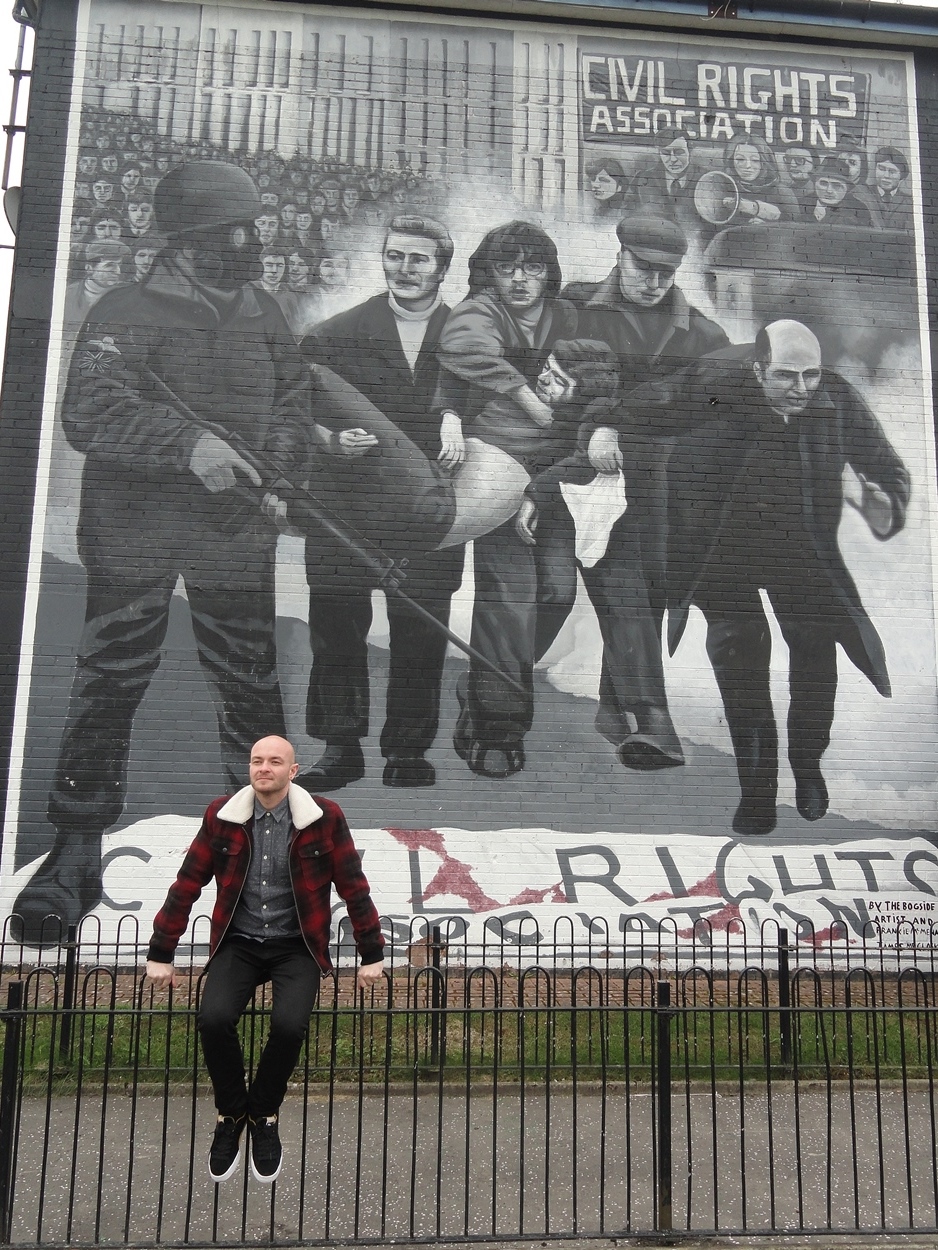 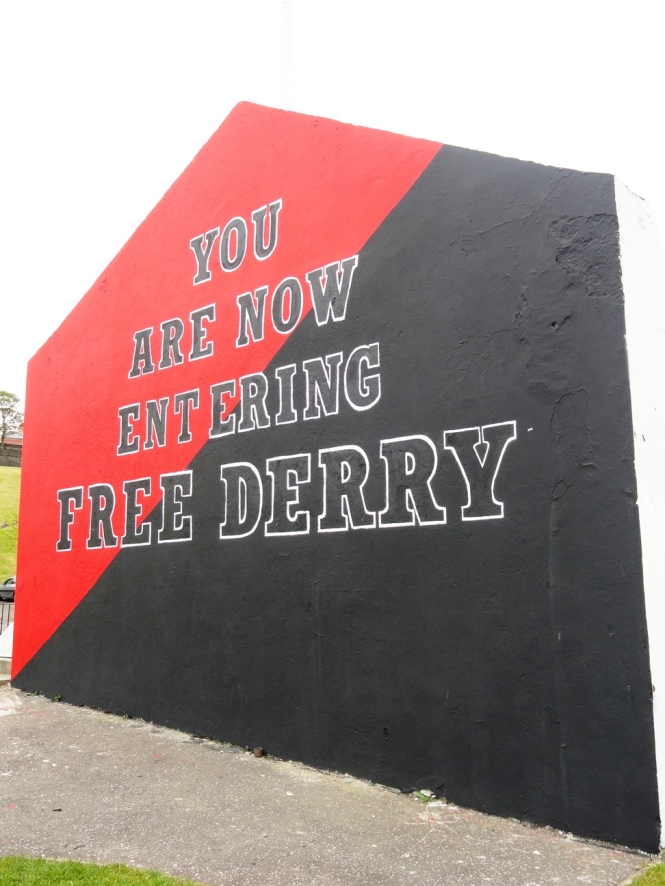 The iconic 'You are now entering Free Derry' mural at Free Derry Corner.

The Giant's Causeway is a highlight for most on a trip to Northern Ireland. It's interlocking basalt columns, formed by a volcanic eruption, take the shape of hexagons. It's unique geographical formations means that it is now a World Heritage Site. It has an other-worldly feel about it - even taking into account the number of tourists visiting the site on the day we did. It is best to visit in the morning because of the popularity of the site, which is managed by the National Trust as a place of national interest. On a grey weekend in Northern Ireland we were lucky to get to the Causeway at a sunny break in the cloud, meaning that the basalt columns, which appear like stepping stones making their way down to the sea, were set off brilliantly by the light. Also lit up were the little pools of sea creatures living in recessed hexagonal columns. The Giant's Causeway is Northern Ireland's most popular attraction. It is easy to see why. 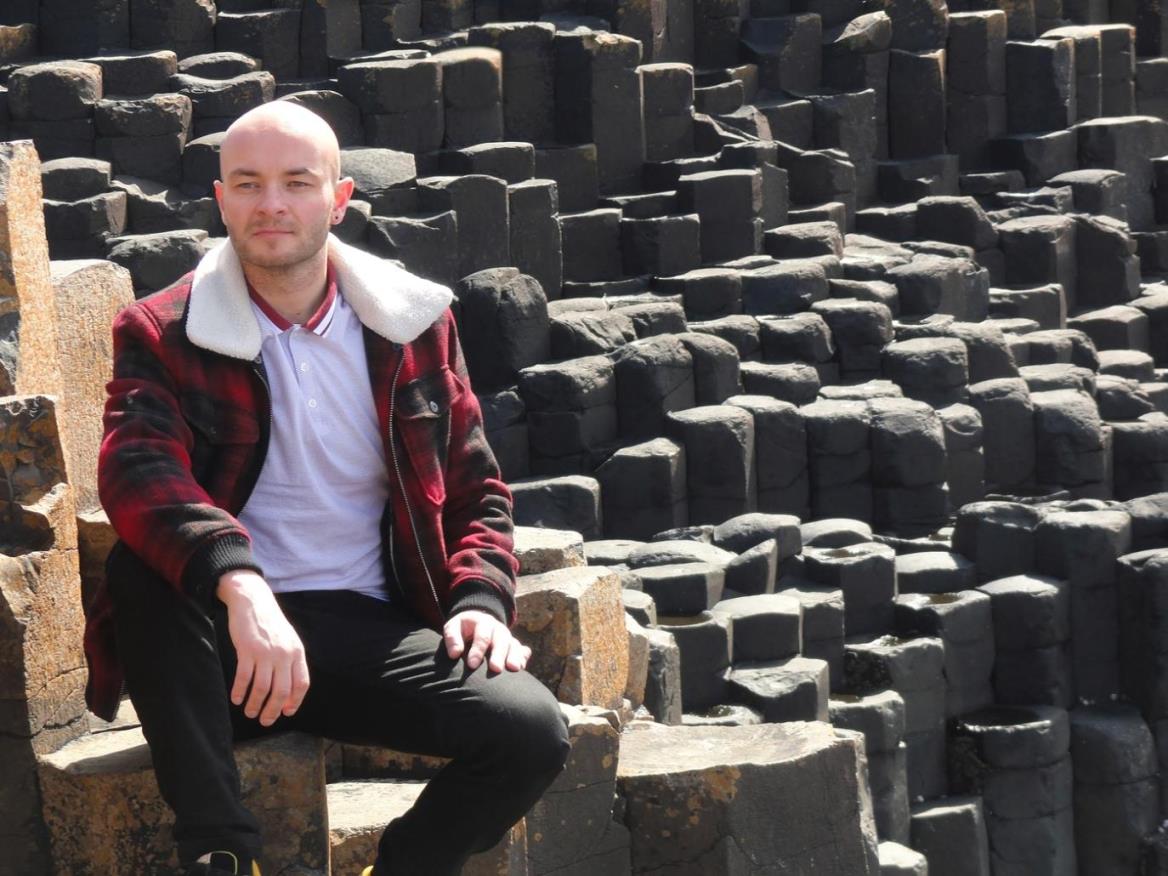 Sitting on the 'wishing chair' at the Giant's Causeway with its otherworldly hexagonal basalt columns.

A short drive east from The Giant's Causeway you will find a small place called Bushmills Carrick-a-Rede. On a sunny day the views are wonderful. The water is crystal clear - almost tropical. Swaying above the Caribbean coloured waters is a rather scary rope suspension bridge. Which we crossed. Twice. Worth a visit. 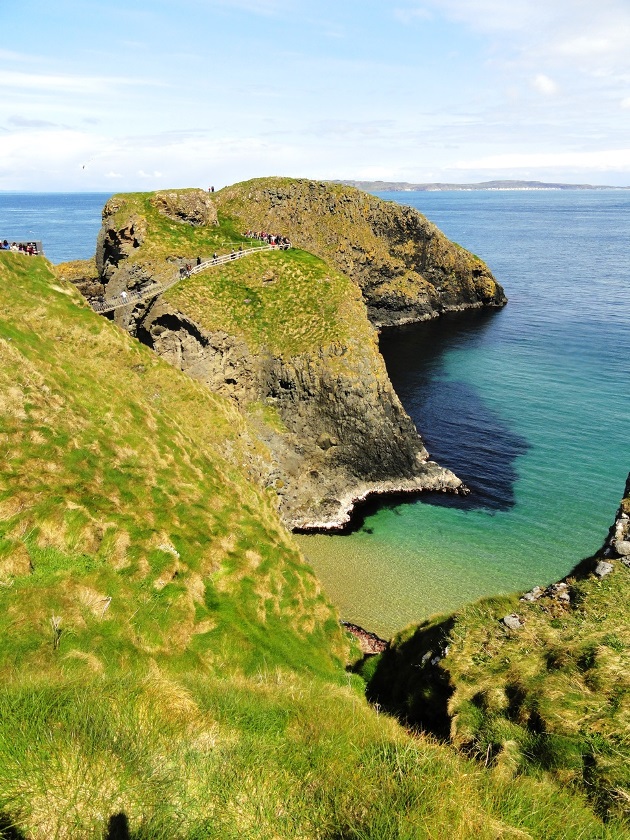 The twenty metre long rope bridge suspended above the rocks.