Poland has had a tough recent history. It was the first country to be invaded during the Second World War in 1939 only to later be consumed by a triumphant USSR into becoming just another satellite state of the Soviet bloc, coming with the cumbersome name of The People's Republic of Poland. Like many countries across the former Soviet Union, Poland consigned communism to the vaults of time in 1989 as a wave of democracy spread across Europe, resulting in the dismantling of the Berlin Wall. Thus, Poland has enough intrigue and recent dark history to make a trip here memorable and meaningful.

I must admit, Poland wasn't the first country which sprang to mind when a friend tapped me up for a journey abroad. It was her choice to visit Poland, not mine. She was keen to see a former Eastern Bloc country: I, on the other hand, was thoroughly naive about Poland. It was an unknown quantity being, as I was then, much more of a novice traveller who failed to do his homework on a country before leaving. Armed with my ignorance, the Rough Guide to Poland and a digital camera, we set off on what was, at the time, my first ever visit to a post-Soviet nation.

Poland was a sobering place. There was a definite greyness which seemed all pervasive - and I don't think I can blame the weather entirely for this. Some days were bright and sunny and yet it was difficult to escape the grey feeling in parts of the country. Warsaw, in particular, has been significantly scarred by the greyish concrete of its former communist days, concrete hallmarks of an ideology which built functionally and not aesthetically. Perhaps it is the association of the word Poland with the Second World War in my mind which was responsible for the general sense of foreboding which I just couldn't seem to rid myself of.

Of course, a train journey 150km southward to Krakow did little to shift the gloom and despondency being, as it is, the infamous home to one of the most notorious Nazi extermination camps in Europe. And this is the thing about a visit to Poland - its history, and, to be more precise, its recent dark history, never seems that far away. Poland is, therefore, an evocative destination for those in search of Dark Tourism.

Poland was the start of a huge fascination of mine with the former Eastern Bloc and ex-communist countries in general. Unbeknown to me at the time, within a few years I was to visit virtually every country in the former Soviet Union - as well as those in other communist Blocs such as Yugoslavia, Romania and Albania. Poland was the start of it all and a key punctuation mark on my journey around the world, orienting me to particular countries and informing my travel choices for years to come. Poland, and Eastern Europe in general, are captivating places to visit if you want to taste the social order which came so close to engulfing the continent but which, ultimately, failed so dramatically.

Warsaw has the nick-name The Phoenix City because it has endured a multitude of wars and upheavals in its lifetime but always seems, somehow, to bounce back. The largest building in Warsaw, by far, stands as a rude reminder to the Polish that their country has been the terrain of constant occupation for decades since the Nazi invasion. This goes some way to explaining the polemical feelings people have for the Palace of Arts and Culture building in the capital: some are proud of its architectural merit, others see it as a memorial to a chapter of Polish history best forgotten. Built in 1955, it mimics the design of Stalin's Seven Sisters in Moscow. The story goes that the Poles were given a choice of two famous Russian exports - a Sister Palace or a USSR-style Metro underground system like those in the Russian capital, St Petersburg and Kiev. Poland opted for the Metro system. They were given the Stalin Palace instead. Classic Soviet mind games. Despite recent additions to its skyline, the Palace of Arts remains the tallest building in Warsaw - and, indeed, Poland. My trip to Warsaw was the start of my obsession with the Stalin Palace.

Warsaw was clearly a city which had lacked any investment in its infrastructure; a classic Soviet-style hangover experienced by many a former satellite. The city's central train station was the physical embodiment of this, its departure board not electronic but, instead, comprised of pieces of card which had to be manually moved into position by an ageing, less-than-dexterous, gentlemen on a rickety ladder. Being a naive traveller from the West, I must say I was a bit shocked at this realising, perhaps for the first time, that I was metaphorically far from home.

Warsaw has beauty, too, despite suffering heavily during Nazi bombardment. Warsaw's Old Town or Stare Miasto offers the kind of cobbled streets, cafes and quaint architecture many expect from a European capital city. However, I do remember feeling a little cheated when I discovered, on arriving back in the UK, that what I thought was old and traditional Poland, was actually less than fifty years old. 'Old Town', it seems, was a bit of a misnomer having been completely rebuilt during the 1950s. 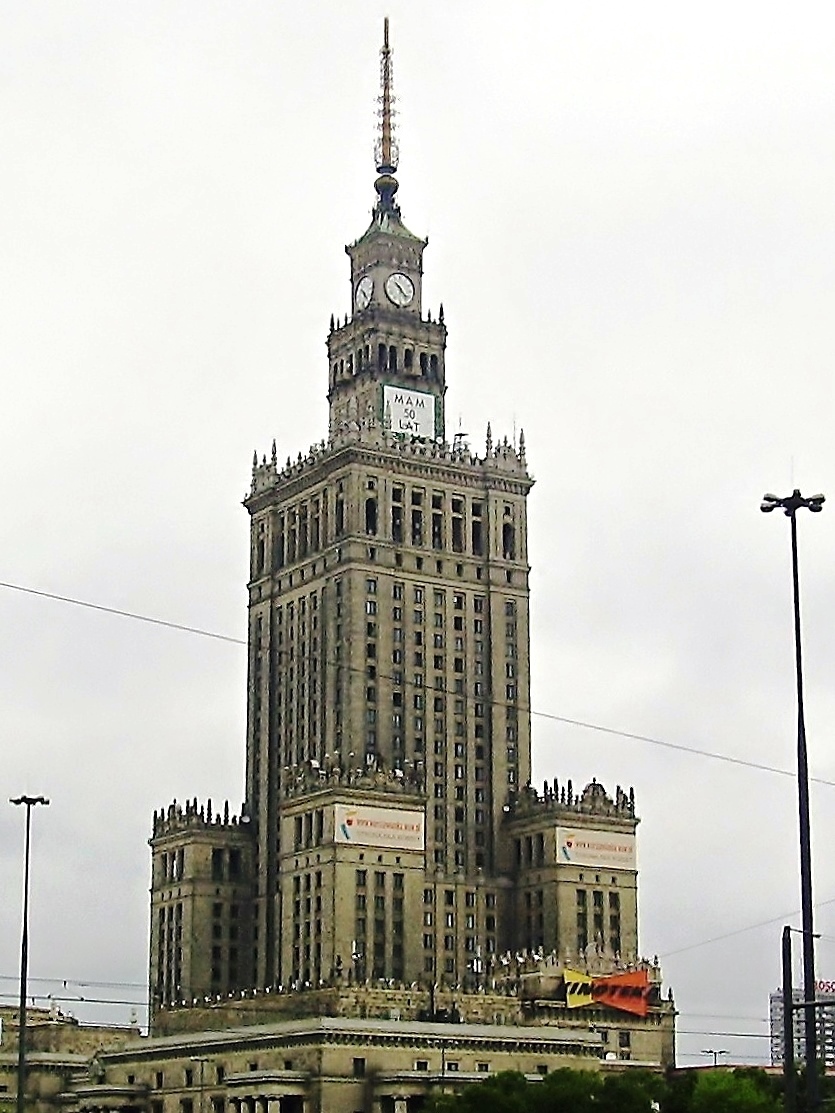 The monolithic Palace of Arts and Culture: Warsaw's 'gift' from the Soviet Union. 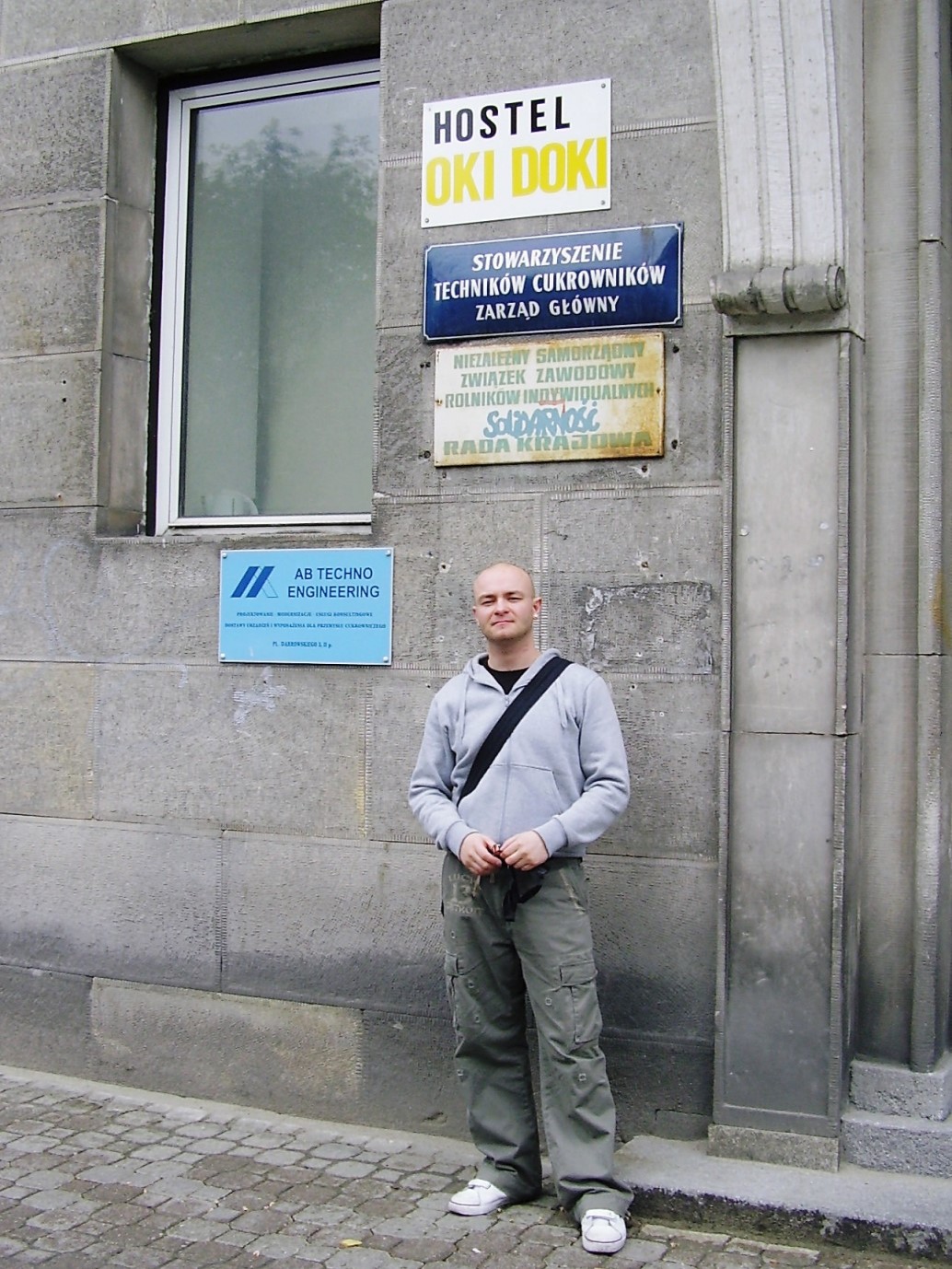 Outside the Oki Doki hostel in central Warsaw. 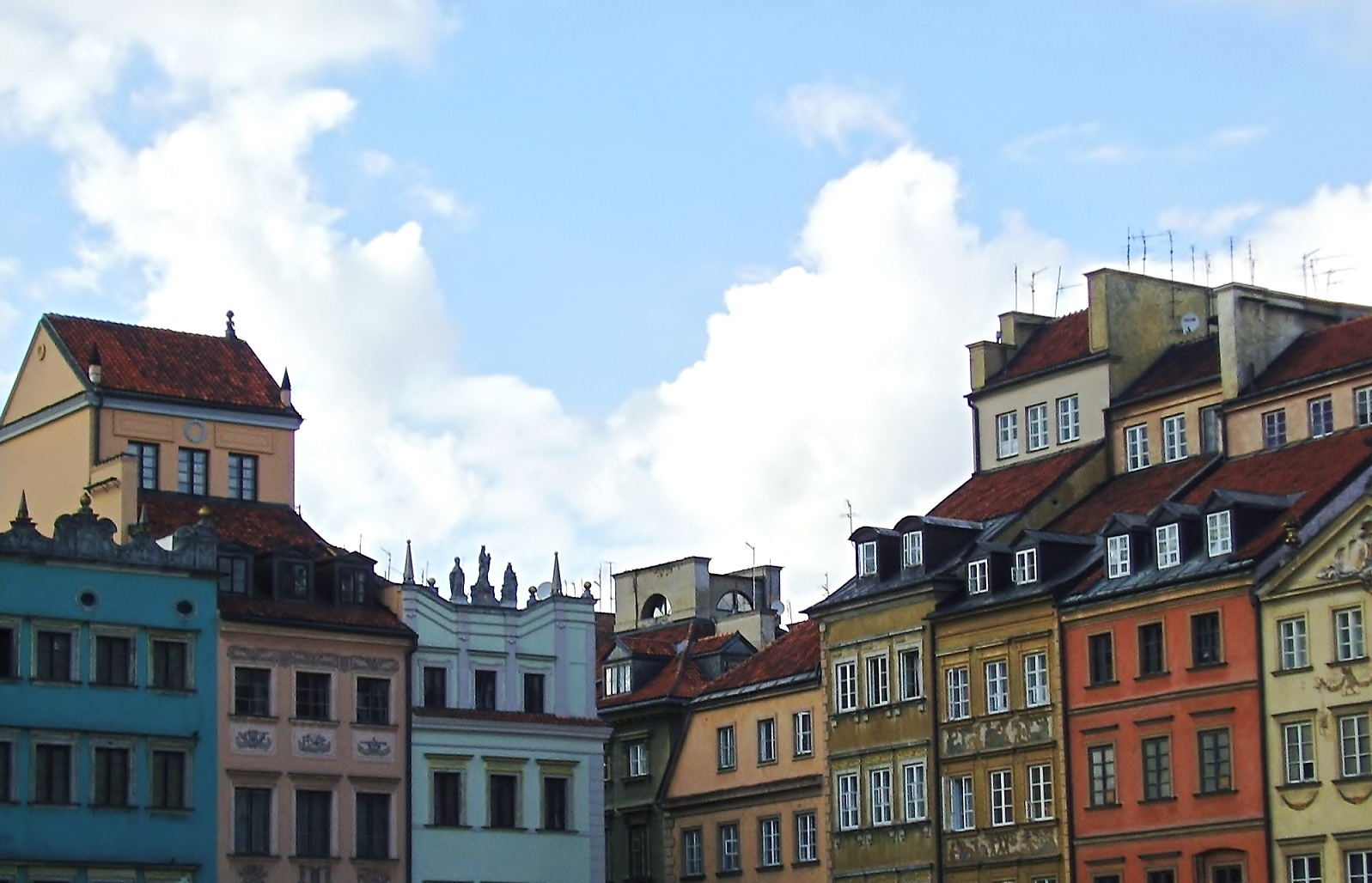 Krakow is Poland's second city and is a 150km train journey from Warsaw. Its delightful Market Square with pastel-coloured buildings, spires, domes and its grand Basilica were a welcome relief from the capital's illusory and staged Stare Miasto. However, despite sitting in the charming Market Square drinking a coffee and enjoying the sun, I could not fully enjoy it for, in my mind, was the unpalatable knowledge that I would soon be visiting one of the most notorious Nazi death camps, which was waiting for me just outside of the city. Auschwitz Birkenau-II.

Auschwitz Birkenau-II was the Nazis' solution to the Jewish Question. It is thought that over a million people were executed, gassed or starved in its grounds and its forty other satellite camps. Our tour guide, a middle-aged Jewish woman, was dignified and knowledgeable about the horrific events which played out there. She showed us around one of the remaining gas chambers and two of the ovens used to roast human bodies. Some involved in the tour party did all they could to hold back their tears. I felt utterly uncomfortable and wondered if I should even be taking photographs of such frightful remnants of genocide. Out of respect, and not wishing to sink into ghoulishness, I restricted the use of my camera to aspects of the tour I thought appropriate to photograph. Several years later I would see the same tour guide on an Auschwitz documentary broadcast on the BBC.

Krakow will, for a long time to come, be bound up with the atrocities of its past, its name indelibly marked with the events of the Holocaust. This burdens Krakow with an unfortunate but essential role in ensuring the world never forgets what one human being is capable of doing to another. If you are visiting Poland it is your human duty to visit and pay your respects. As the commemorative plaque at the camp records, and featured at the end of this page, Auschwitz Birkenau-II is a "warning to humanity". 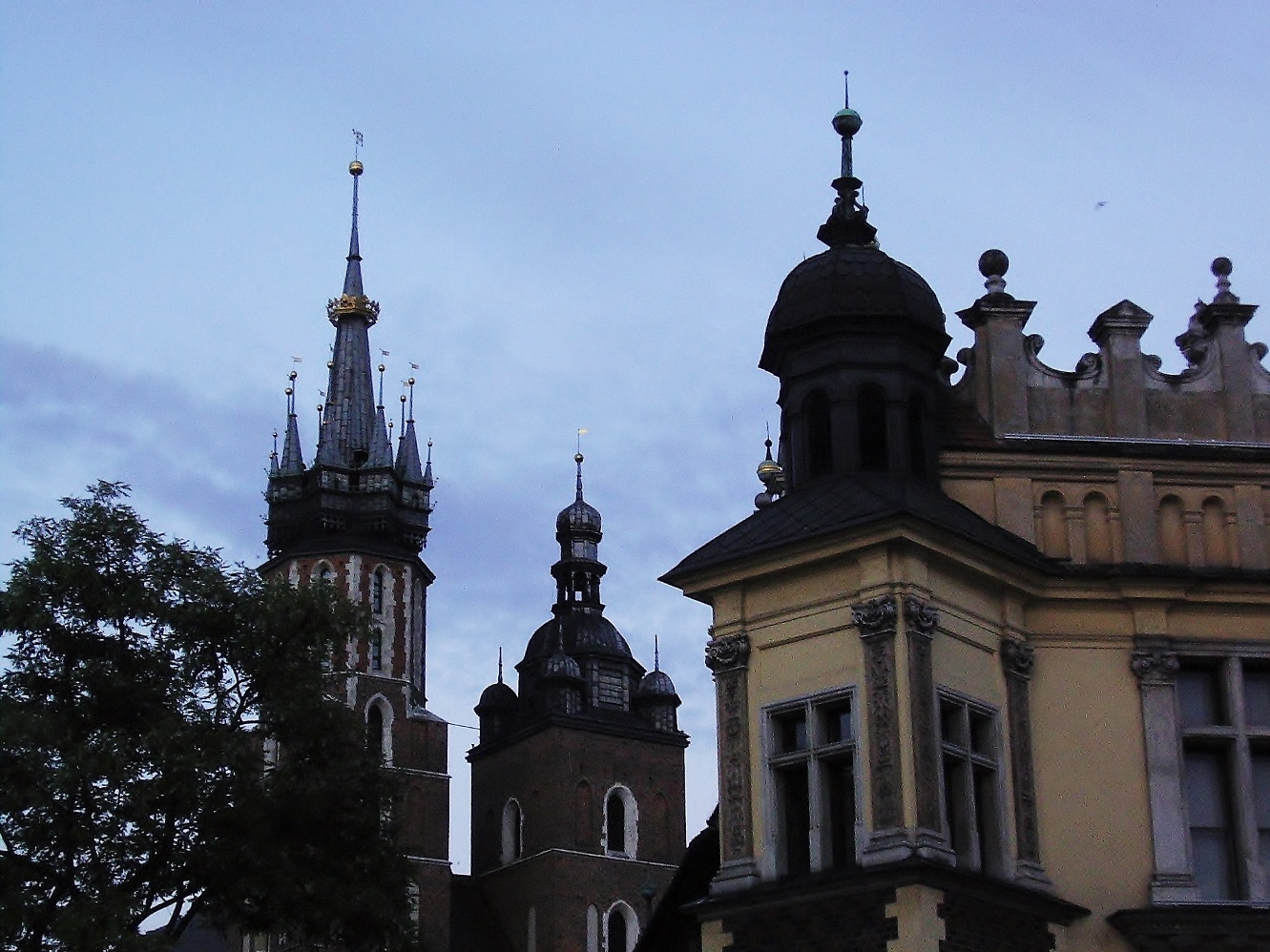 Spires and spikes at sunset in Krakow's Market Square. 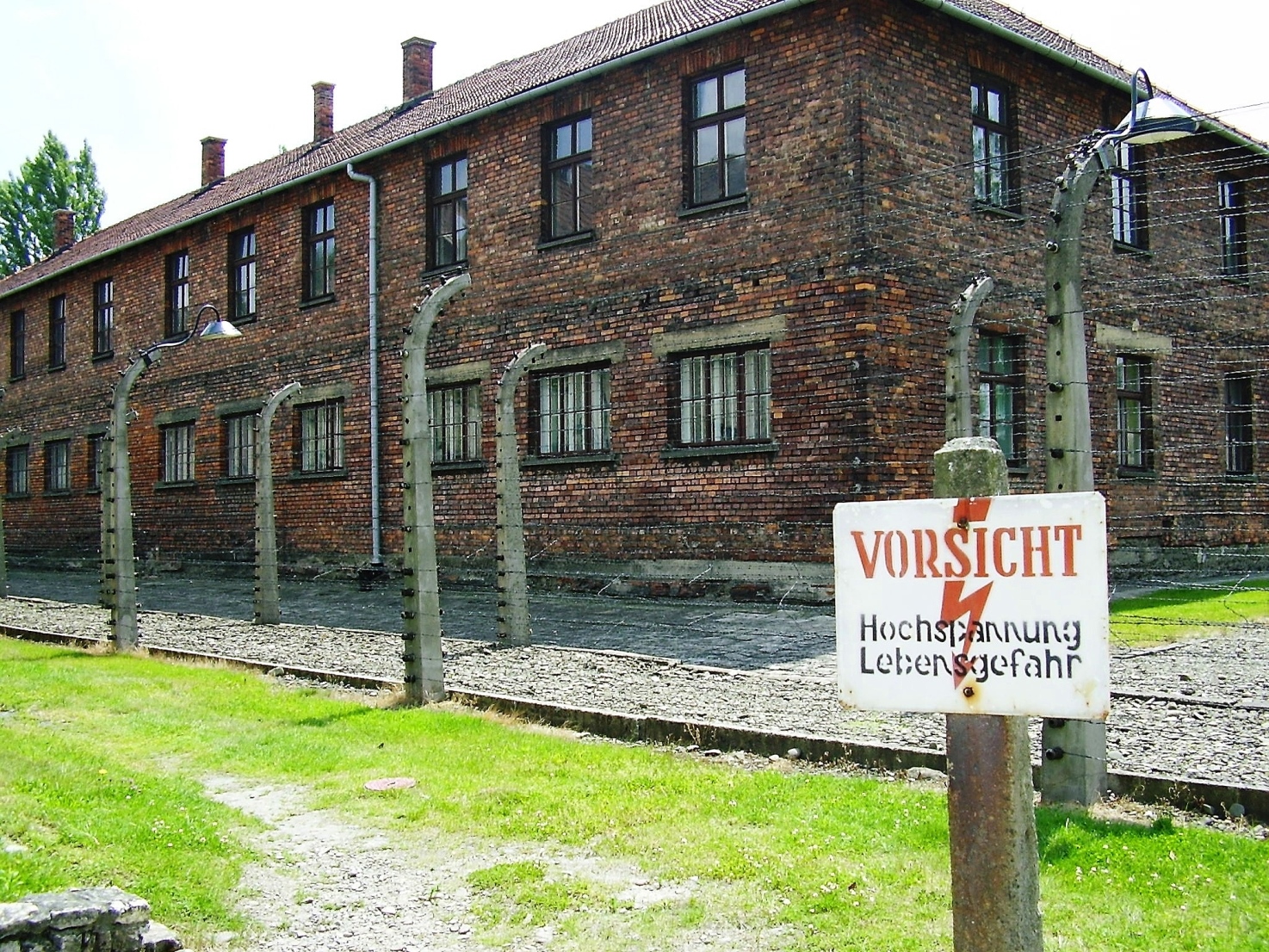 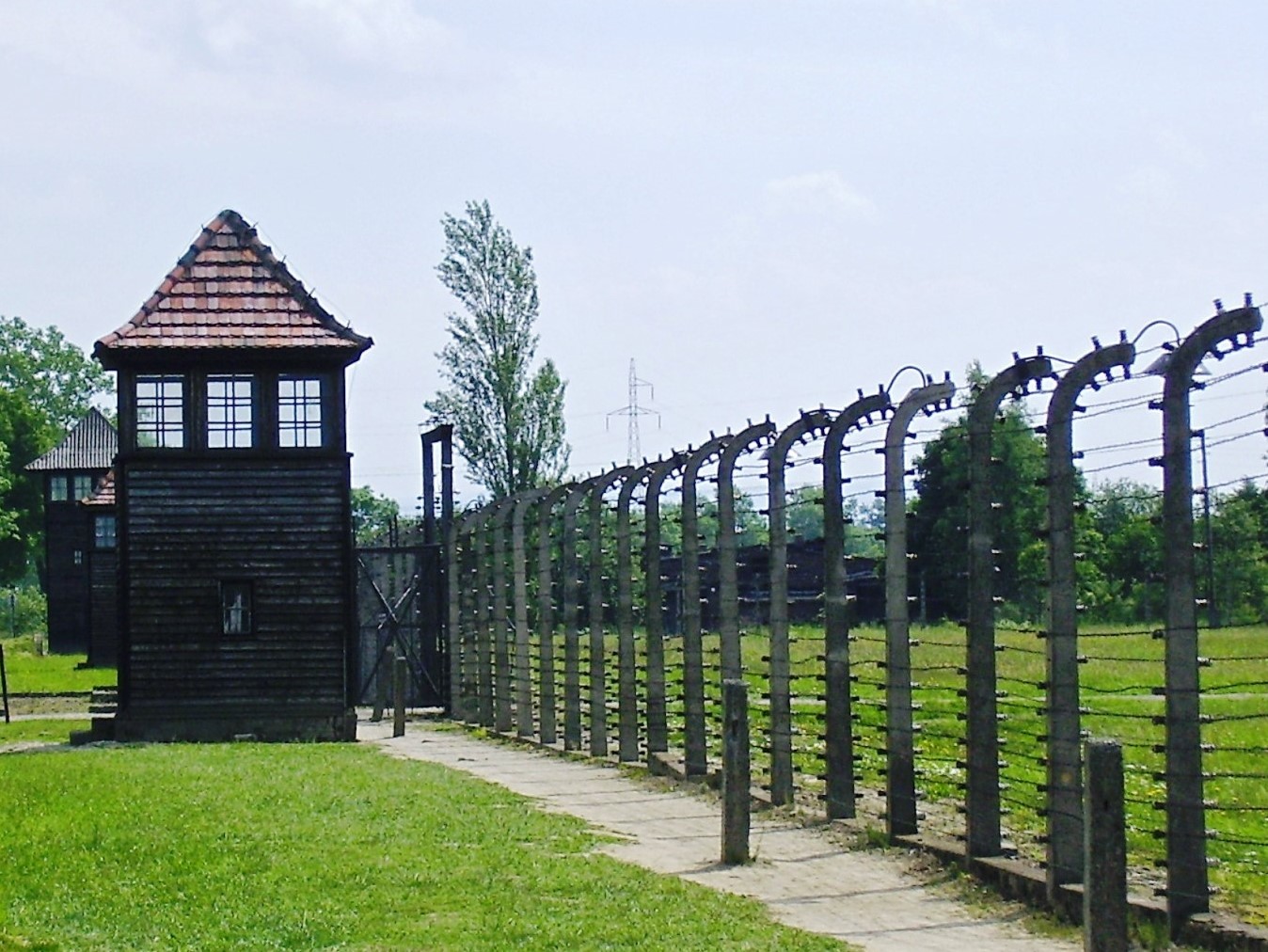 The watchtowers lining the electrified fences encircling the extermination camp. Over one million people were murdered on this site.