Where: Charleroi, Belgium. Luxembourg City, Luxembourg. Europe.
When: October 2013
What: Palace of the Grand Dukes, Three Towers, The Corniche, Grund, Neumunster Abbey, Wilhelmplatz Flower Market, Adolphe Bridge, Centre Gare, Patisseries, Place de Armes.
How: International flights, international coach, walking, taxi.
Country counter: Country No.52
Illnesses or mishaps: Realising too late that most places in Luxembourg City are actually closed on a Sunday. It's no fun traversing an unknown city for the first time with virtually nothing open; in some places in Europe Sunday is still considered a day of rest. 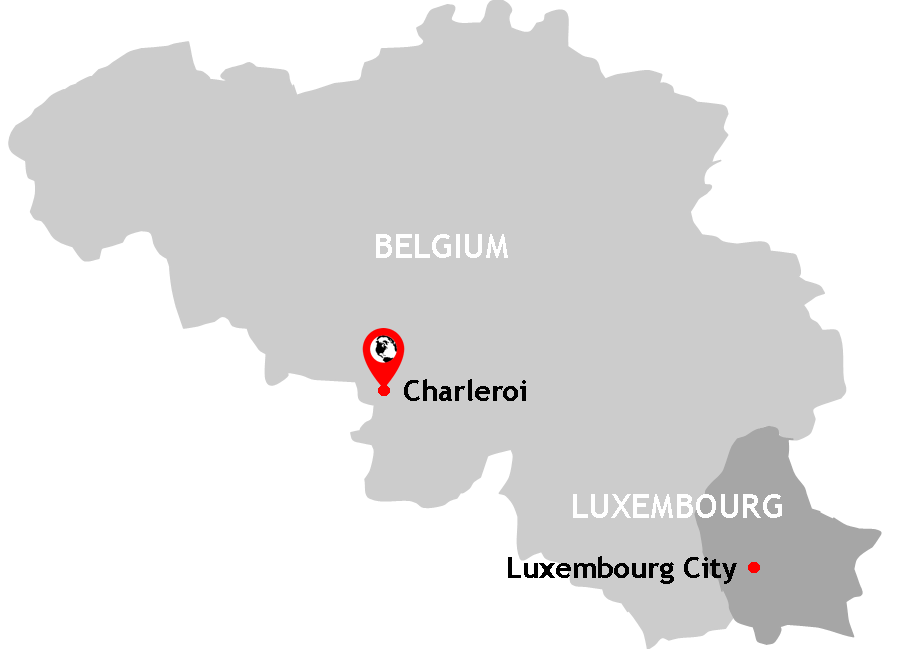 This was a trip to Luxembourg's capital Luxembourg City for a city break flying to Charleroi in southern Belgium and then travelling on to Luxembourg. Luxembourg is one of the smallest states in Europe, nestled in amongst Belgium, Germany, Switzerland and France. I have been to Belgium before, and so the principal aim was to sample what Luxembourg had to offer. Belgium, sadly, was relegated to no more than a transit point. I was vaguely curious about Luxembourg and, I reasoned, love European city breaks at Autumn time - perfect timing, then, for a micro-adventure to a Lilliputian city characterised by cobbled streets and Gothic spires perched on plateaus overlooking steep forested valleys. There's something about sauntering beautiful Autumnal streets and wiling away the time in warmed coffee shops which seems to appeal to my inner old man.

Flying direct to Luxembourg from the United Kingdom is expensive so I hatched a plan to get to Luxembourg through southern Belgium by travelling on a bus overland to the Luxembourgish capital. In doing so, what would have otherwise have been an unjustifiably pricey visit to one of Europe's smallest capitals, was rendered rather affordable - even when factoring in the hotel stopover in Belgium's Charleroi region and transport to and from Luxembourg itself. We boarded the early morning coach at Charleroi departing 06:30 for what was a relatively uninspiring five hour journey through mostly flat landscape. At such an ungodly hour, apart from the driver and one other passenger, we had the coach to ourselves. It was too dark to see anything out of the coach window so the only other option was to sleep. Which I did. The journey was dark and seamless with no stopping at the border. The only marker to symbolise a change in nation states was the appearance of two flags on poles alongside each other: one Belgian the other Luxembourgish.

Dear Belgium, I'm afraid to admit it - we well and truly used you! For the first time on agmtraveller.com I have been to a country on a trip and have hardly any photographs to show for it. We did spend the night in Belgium as well as travel through it twice so I've constructed this Chronicle as a double country page on this site rather than just a single one for Luxembourg. To omit Belgium completely from this Chronicle would not accurately represent the journey we undertook. A page for 'Belgium & Luxembourg' it is then. I hope you don't mind.

Luxembourg is a small country whose existence is made additionally ambiguous to the average mind because there is a region of Belgium also called Luxembourg - and it borders Luxembourg! Luxembourg has one of the highest GDP per capita in the world, is the last remaining Grand Duchy in the world and is famous, perhaps sadly, for being a generous tax haven for millionaires. It has three official languages (Luxembourgish, German and French) and its capital is imaginatively named... Luxembourg City.  Admittedly, my journey through Belgium to Luxembourg was only so because it was one of the few remaining European countries I had yet to see. These little, inexpensive city trips serve to satiate my travel appetite and keep my travel hunger at bay until more substantial trips to long-haul destinations come around.

We pulled into Luxembourg City just before nine in the morning at the Centre Gare - the city's main rail station located just outside of the Ville Hauteis. This part of town, known as Garer Quartier, is frequented by bands of unemployed men who hang around on street corners back-slapping each other and drinking cans of beer - oh, and oft frequented by tourists eager to shave a few quid off of the cost of a hotel stay, us included. Apart from our cheap inter-country coach tickets the rest of Luxembourg's prices were eye-wateringly exorbitant. Staying in the Garer Quartier seemed to be our only real option; staying overnight in a more salubrious part of the city was simply not affordable. And so, with something of a heavy heart, we slept with the drunks, the night workers and the general undesirables of Lux City (figuratively speaking, of course). The tourist mindset is normally programmed to think in terms of 'good and bad' parts of town, but Luxembourg City is not all cute cupcakes, soaring spires and millionaires. This city comes with a distinct and incongruous grit of urban. In one of the far nicer parts of the city, we happened upon three men in a park openly smoking hard drugs. It was really confronting to witness this during the daytime and in close proximity to the sophisticated French cafe culture and the capital's soaring spires. Like two sides of a coin, Luxembourg City's historical sights are intertwined with drug dealers, beggars and petty criminals. It was a contrast I found difficult to reconcile; both sides not being from the same but, seemingly, different coins entirely. So different, then, from what I was expecting from Luxembourg - the world's second richest country, beaten only by the oil-rich Qatar in the Middle East.

The more endearing side of the Luxembourg coin, my 52nd country, was the one I had come to see. We'd arrived under inauspicious clouds and moody skies which threatened to dampen our experience but the predicted rain, thankfully, largely failed to materialise (except for a downpour on the second morning: cue foray to McDonald's, socks under faulty hand dryer, feet wrapped in serviettes - long story!) Lux City in the autumn is a romantic sight to behold as its spires, clock towers and cobbled streets are complemented by peachy and ruby leaves on the trees. Built on a number of plateaus with steep valley sides the city takes on a majestic, fantasy quality. The view of the Corniche seen from the Rhamplateau, the dramatic view of the Grund from the banks of the Alzette River, and the abundant blooms of the Wilhelmsplatz flower market make Luxembourg City a satisfyingly photogenic city in which to saunter. The Luxembourgish capital is also home to a smattering of urban quirkiness which, I have to admit, took me a little by surprise. For instance, there was the bike shelter which had been yarn bombed, effectively given its own woolly jumper. The shelter had also been adorned with a set of net curtains and came complete with frilly tassels. Even the bikes themselves were given this playful, kitsch treatment of urban expression. Among this city's increasingly eccentric sights were the half a dozen terrapins I espied inhabiting the shop window of a menswear store - basking on their rocks alongside the manly essentials of ties and tuxes. Also of note was the public drinking fountain personified as a clown and where pressing his red nose would discharge the desired H2O.  Luxembourg City, therefore, has a playful, infantile quality which goes some way to countering the serious and, let's be honest, slightly dull narrative you have been told about this small, land-locked nation; a land of European politics, morally questionable tax havens and the super rich.

Unbeknownst to me at the time, Sunday is a day of rest in Luxembourg, something clearly embraced by a majority of Luxembourgers being, as it was, disconcertingly deserted when we visited. I was seeking a slow-paced weekend but this was not quite what I had in mind. Nevertheless, there were a small handful of restaurants and cafes open, and these kept us on the better side of hunger. We headed to the boulangerie called Paul just off of the main Place de Armes square. Luckily for us it was open and, also luckily, it served superb French-style pastries. With everything else closed up until Monday, Paul rapidly became our second home. This slightly old-fashioned Sunday situation served further to underscore Luxembourg City's bygone personality; the ringing of church bells across the city an audible call to all listening that Sunday "Est reserve pour les Christians et pas pour les Capitalistes". Indeed, this experience had me reminiscing about those days during my childhood, almost completely dissolved into the mists of time when, like Luxembourg City, Sunday was a day when most were not expected to work. It's a little inconvenient for anyone whose country has sold Sunday to the capitalists but a humbling reminder, perhaps, that we should all take a break sometimes. Indeed, the curated collection of photographs below attest to the tranquility of Luxembourg City featuring, as there is, not another soul,aside from myself, in any of them.

It is a little problematic to distill Luxembourg into a few ingredients which are quintessential or unique because this is a land which is a melange of Germanic, French, Swiss influences: the reality is that you could be eating that patisserie in a Parisian cafe; those quiet cobbled streets you are walking down could just easily be in Zurich; those waffles you're enjoying so much are straight out of Bruges or Berlin. Luxembourg really is a crossroads kind of place, a fact somewhat unsurprising considering its landlocked location. The prevailing cultural and linguistic wind, however, blows in an unmistakably French direction - another opportunity on my journey around the world, then, for me resurrect my French speaking skills from their woeful slumber (it never ceases to amaze me how much French from High School I can actually remember). It's always uplifting being able to communicate in the local tongue when travelling. 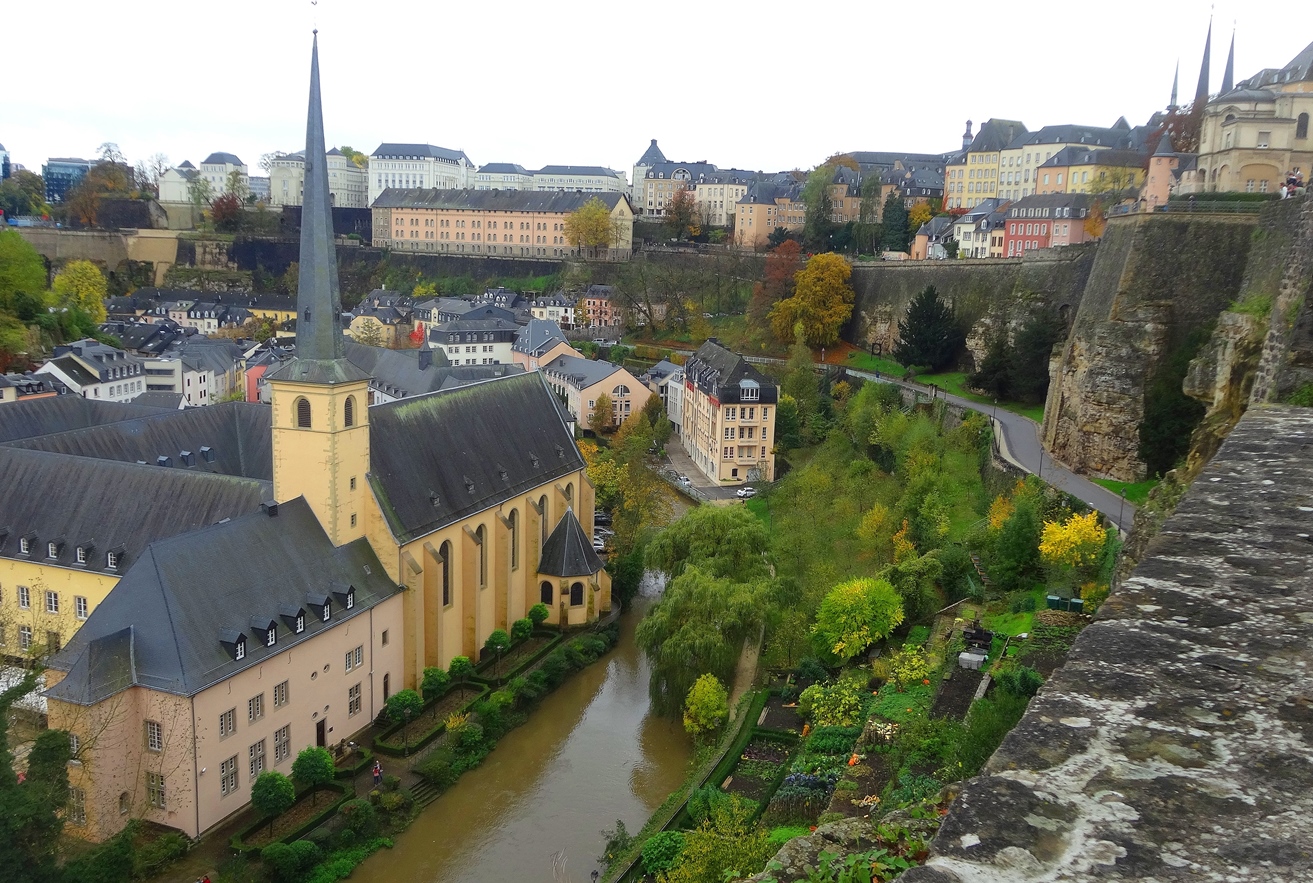 Luxembourg City straddles a deeply-cut river gorge giving it a spectacular setting as a capital city as well as spectacular defensive properties! Left of centre is the Neumunster Abbey. 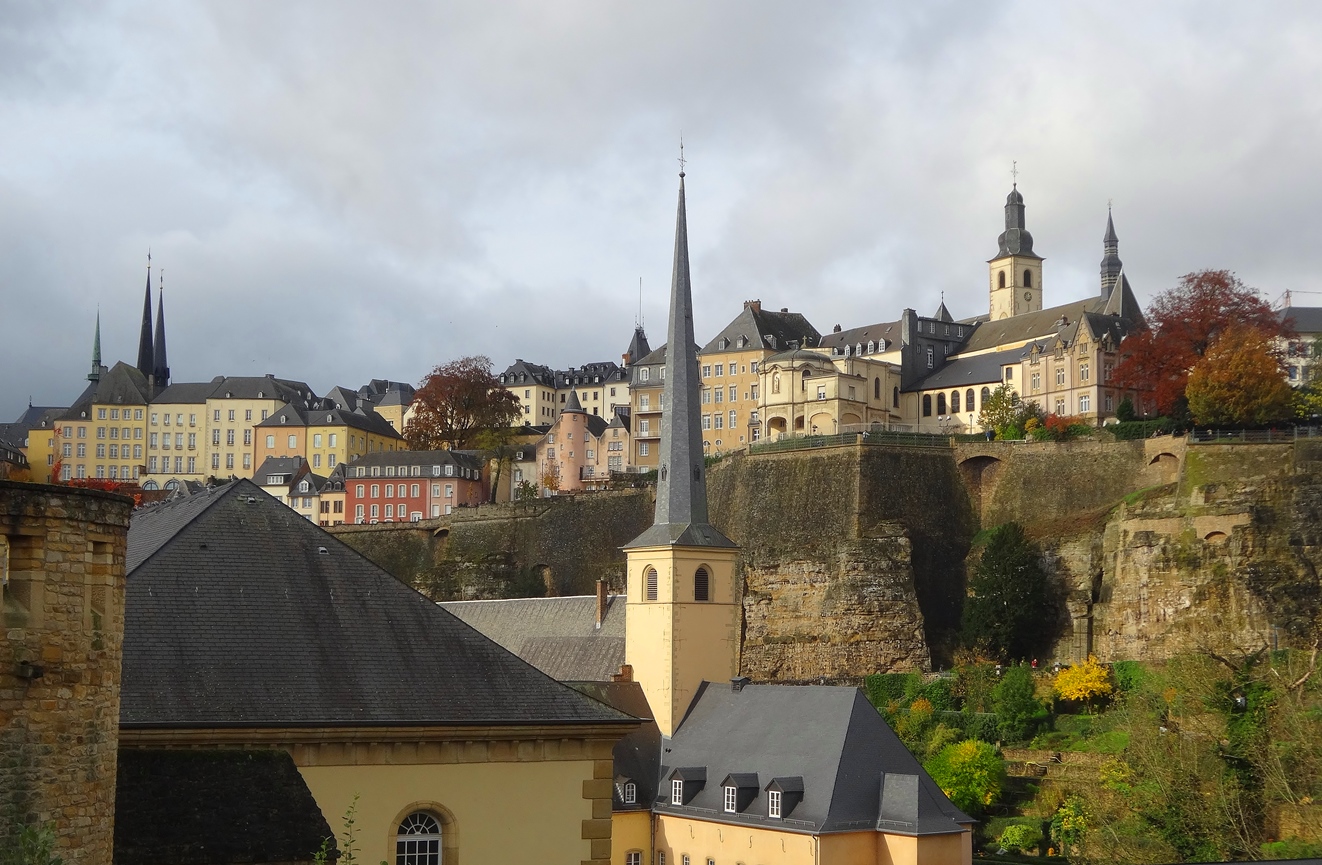 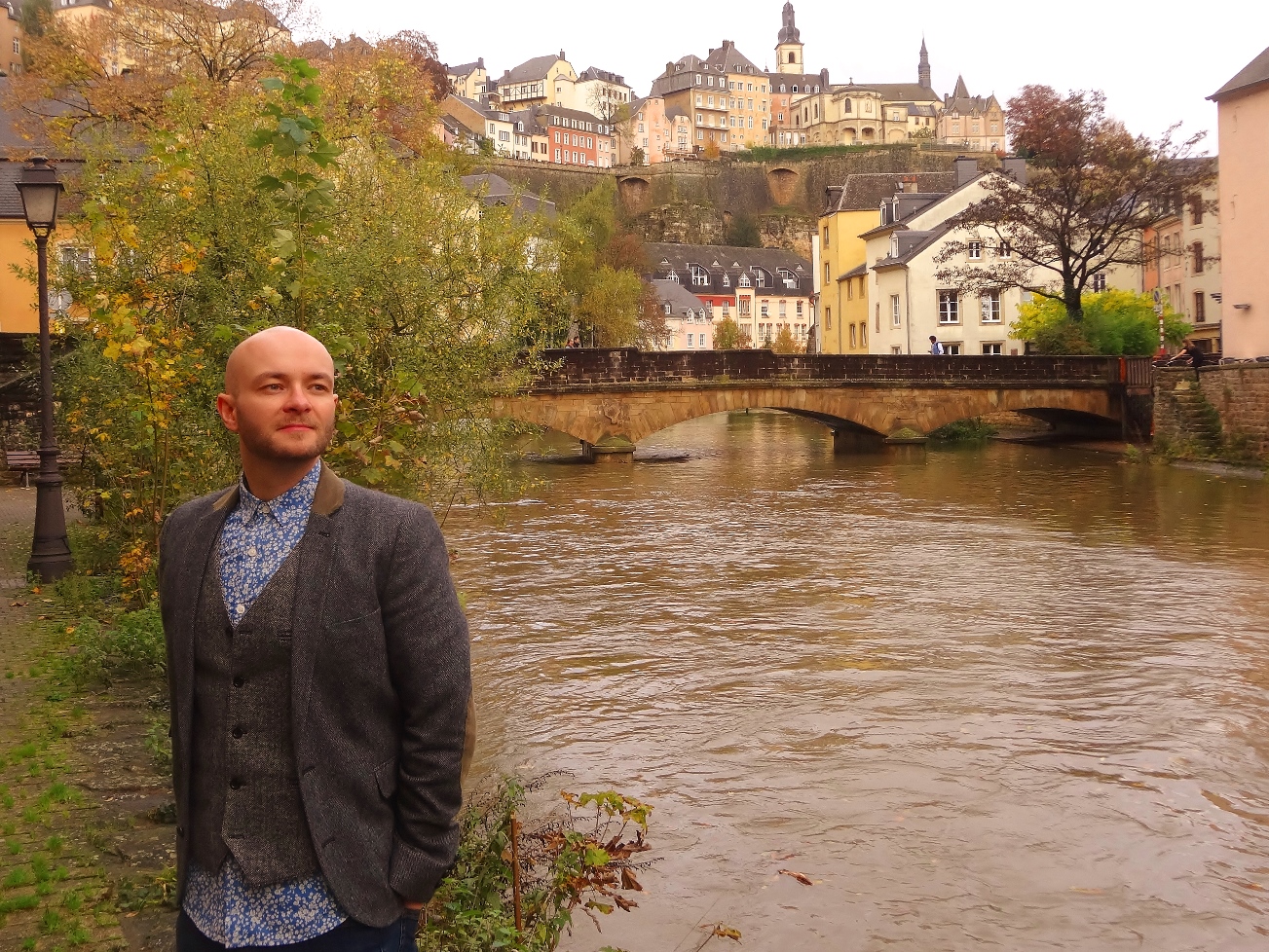 The Grund view along the River Alzette out towards the stone bridge and the distinctive Corniche hillside. 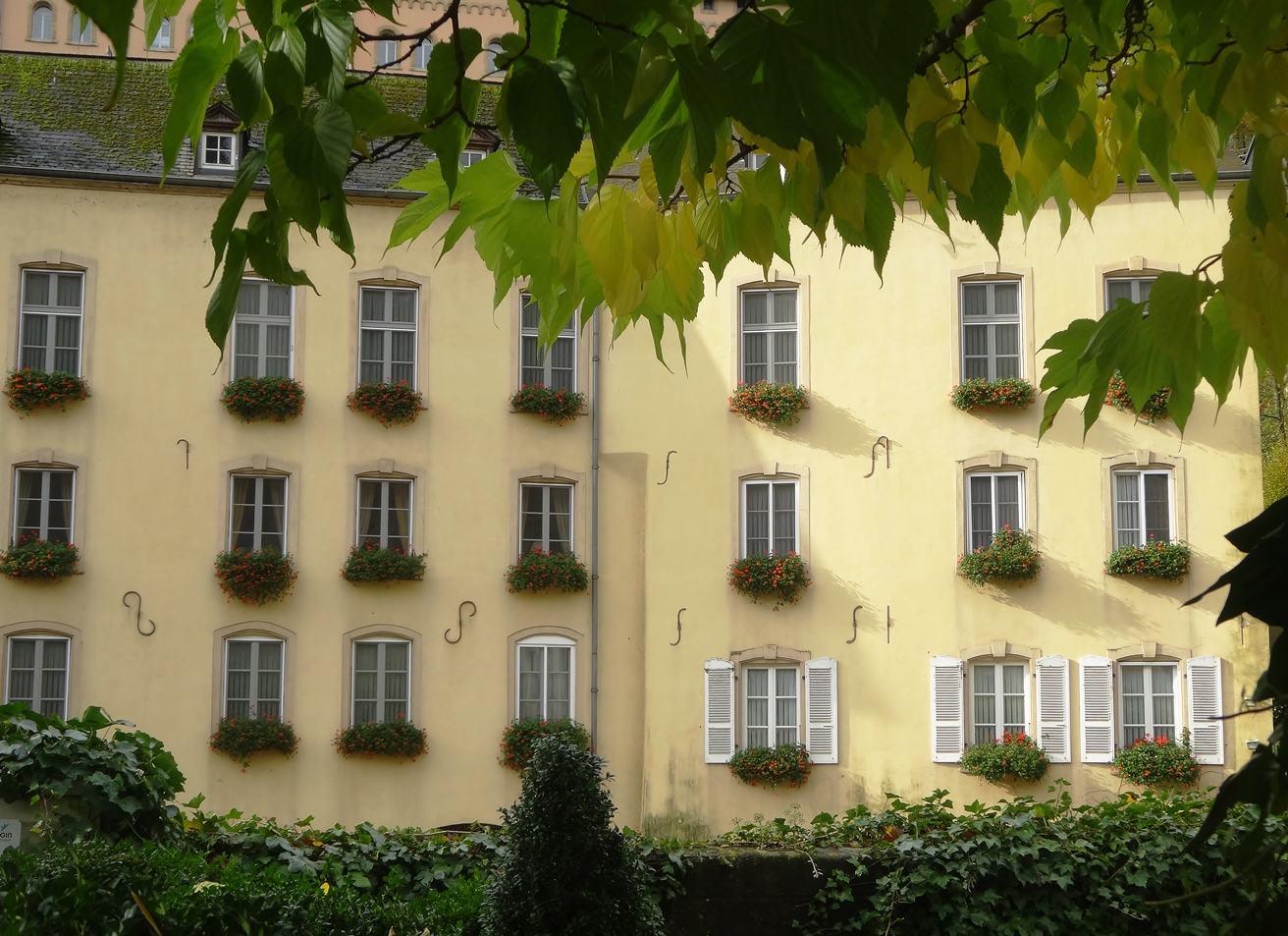 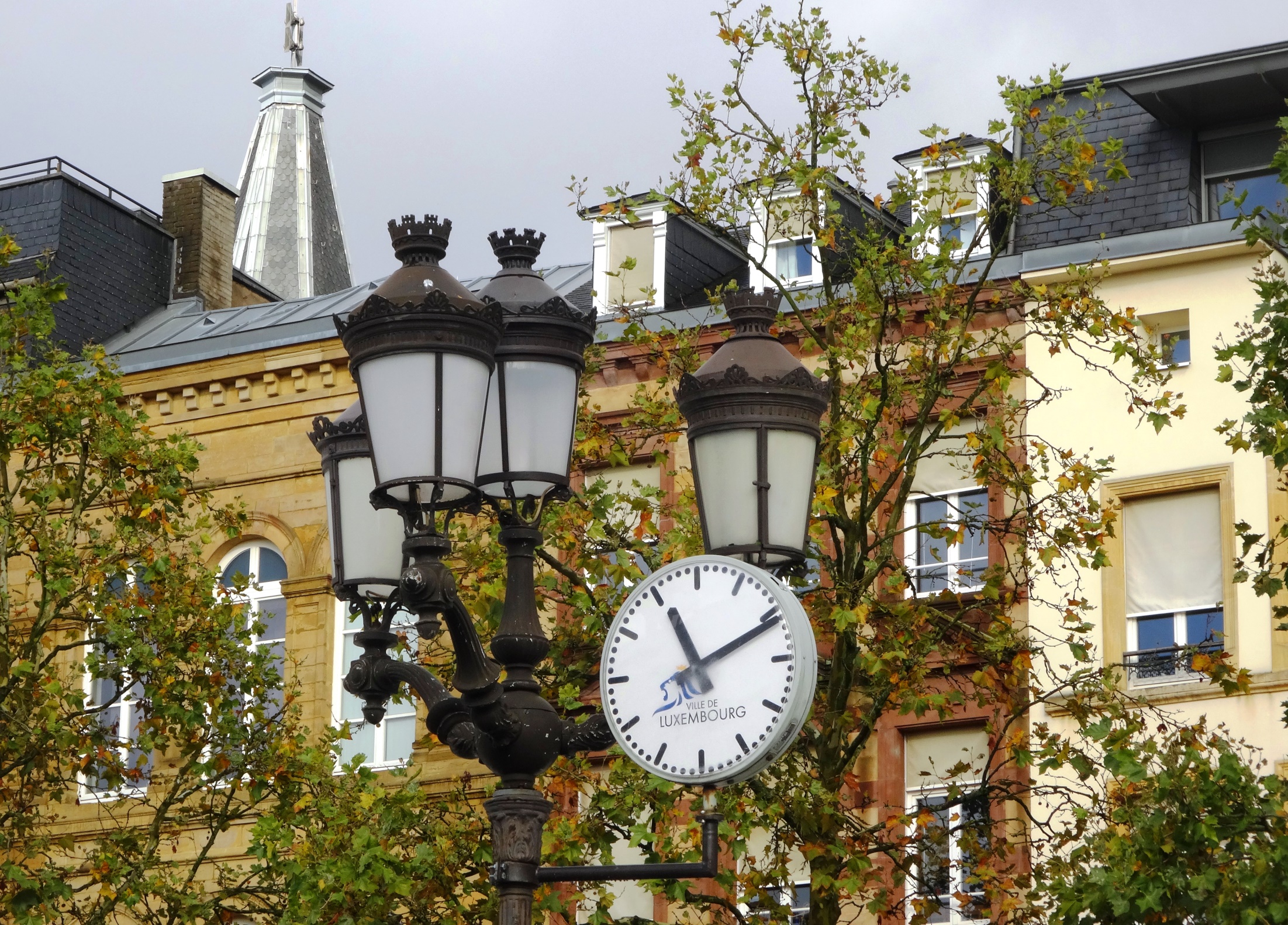