Greek Ferry Adventures Around the Cyclades Islands & Beyond

Where: Athens, Naxos, Delos, Ios, Mykonos, Paros, Antiparos. Greece, Europe
When: August 2004
What: Delos Lions, Acropolis, Parthenon, Athens Amphitheatre, Greek Ferry System, Greek Parliament, Temple of Hephaestus, Windmills, the Mykonos pelican, Statue of Emperor Hadrian, Paros Caves, Iconic Blue Dome OrthodoxChurches.
How: Flight, Walk, Taxi, Greek Ferry System, Pick-up truck.
Counter: 1 country
Mishaps or illnesses: Developing a heat rash which was so bad it required a visit to a private medical clinic where I was injected with some unknown liquid - after which I very nearly fainted (I'm such a hardened traveller). Also, sneaking into a private upstairs area of Athens Airport to sleep until our flight the following morning - and being ejected by an unimpressed security guard. 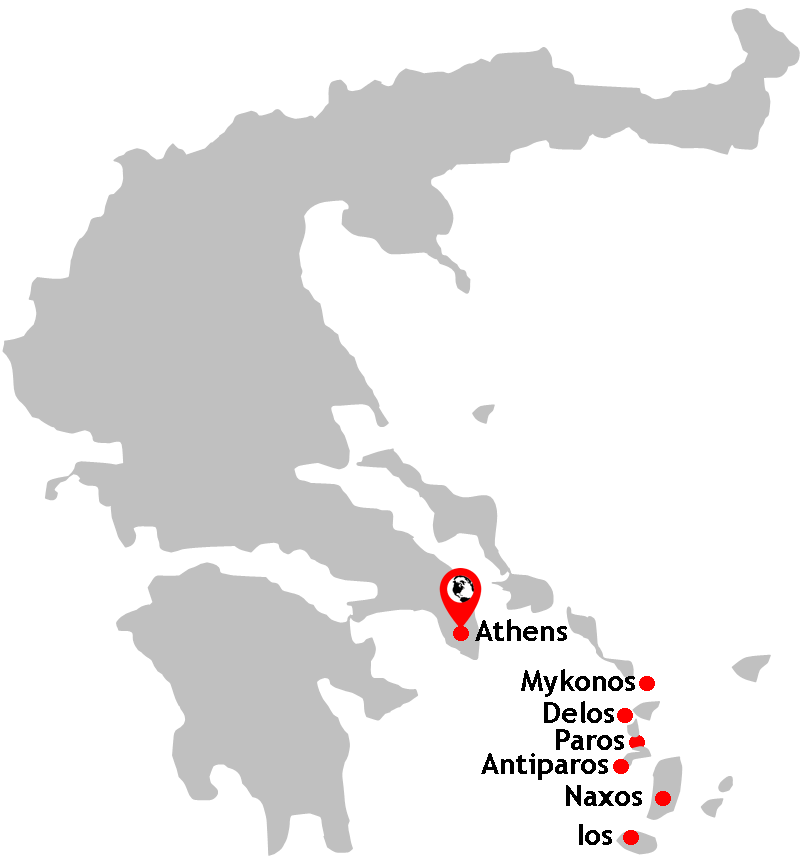 Greece was a real adventure. My only regret is that I didn't manage to take better and more numerous photographs of the adventures we had. As is stands, the ones below represent the very best of what I have (and even these have had software applied to them retrospectively to bring them up to a publishable standard). My fortnight-long hopping around the Greek islands in the central and north Cyclades was in the pre-digital age and thus are the best my old-style 35mm camera could muster back then. There was no plan and no advanced booking for hotels on these islands. This meant that as soon as we got itchy feet, we could hop to another island. By the same token, if we found an island we really liked, or were getting a little tired, we could hold up there for more days than planned. It was my first holiday where there was a real sense of adventure: moving on from location to location and leaving the decision about when to move on, and to where, to the last minute. Nothing was booked in advance, including the accommodation! We merely filled in the blanks as we went along, with only our incoming and outgoing flight acting as the nomadic bookends of the journey.

Following the well-trodden backpacker tradition of leaving accommodation until the last minute, we'd arrive at the port and step off the ferry to be surrounded by a swarm local islanders hoping to rent us a spare room for the night. These were often intense, frenetic moments, a veritable scrum of locals, tourists, bartering and waving of laminated signs. If you are planning on running your trip like this, my advice is to take a pen and pad - handy to clarify prices and make sure an agreed price does not get translated into a higher one when you come to pay. Not having a bed for the night, and leaving it until we stepped off the ferry, was one of the most exciting aspects of our trip around the Cyclades. We had a top figure over which we would not cross for a night's stay. Room owners, a real mixed bunch who were trying to let anything from entire apartments to a renovated garage at the bottom of their garden, were keen to bag us for second and third nights, meaning we could often strike a deal over price - presumably because it meant they didn't have to make their way back down to the harbour the next day to bag their next hopper, giving them an afternoon off.

The Greek ferries were a joy to use and went a long way to making me feel more intrepid explorer than tacky backpacker tourist. The experience on-board, after the general scrum of getting on and off, was reasonably restful. It was often possible to find a quiet spot on the ferry where no other passengers were and watch the departure island fade into the distance and the new island hone into view. How busy your ferry is depends on its departure and destination points, as well as the time of your departure. 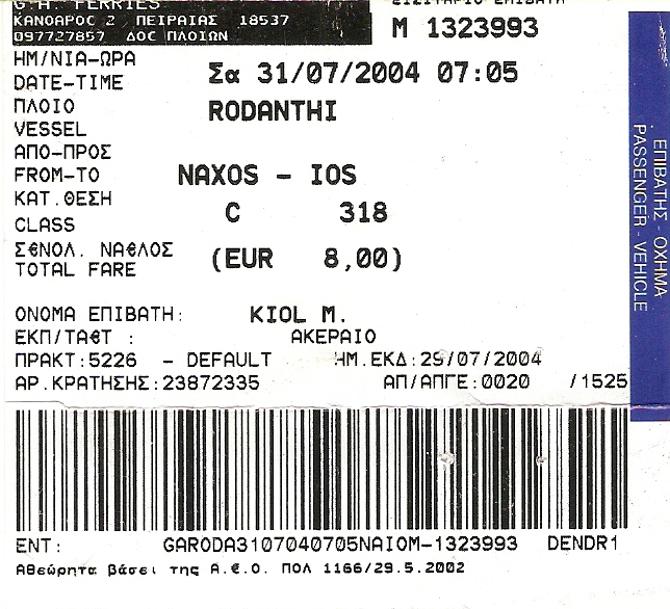 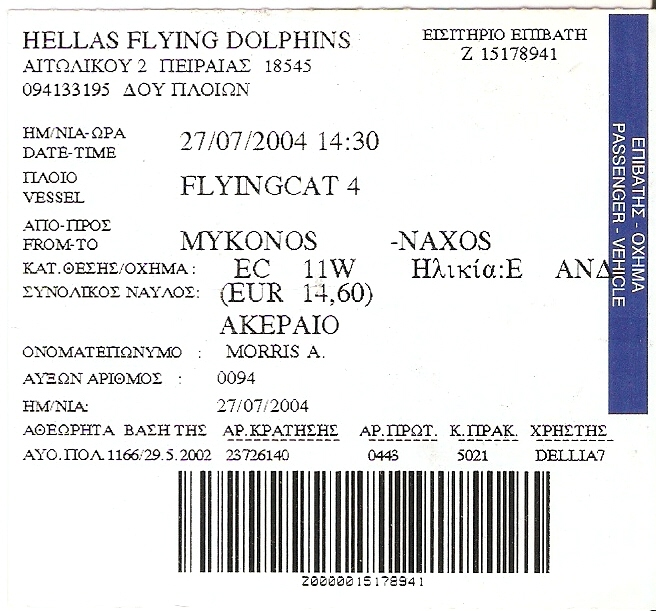 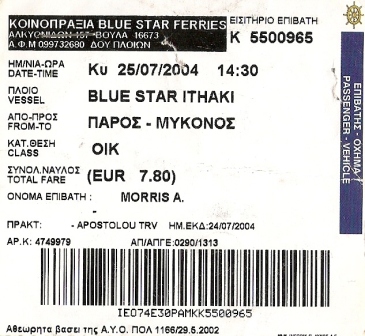 Tickets to ride: a selection of my Greek Ferry tickets.

First stop was the capital city of Athens - the entry destination of our flight. I am always keen that a trip to a country should, in most cases, capture the capital city somewhere in the itinerary. We spent three days exploring the ruins of ancient Greece including the Acropolis Parthenon and the stunning Athens Amphitheatre. The vistas and almost 360°  views of Athens from the top of the Acropolis hill were worth the steep climb in the rapidly increasing steamy heat of a Greek summer day. 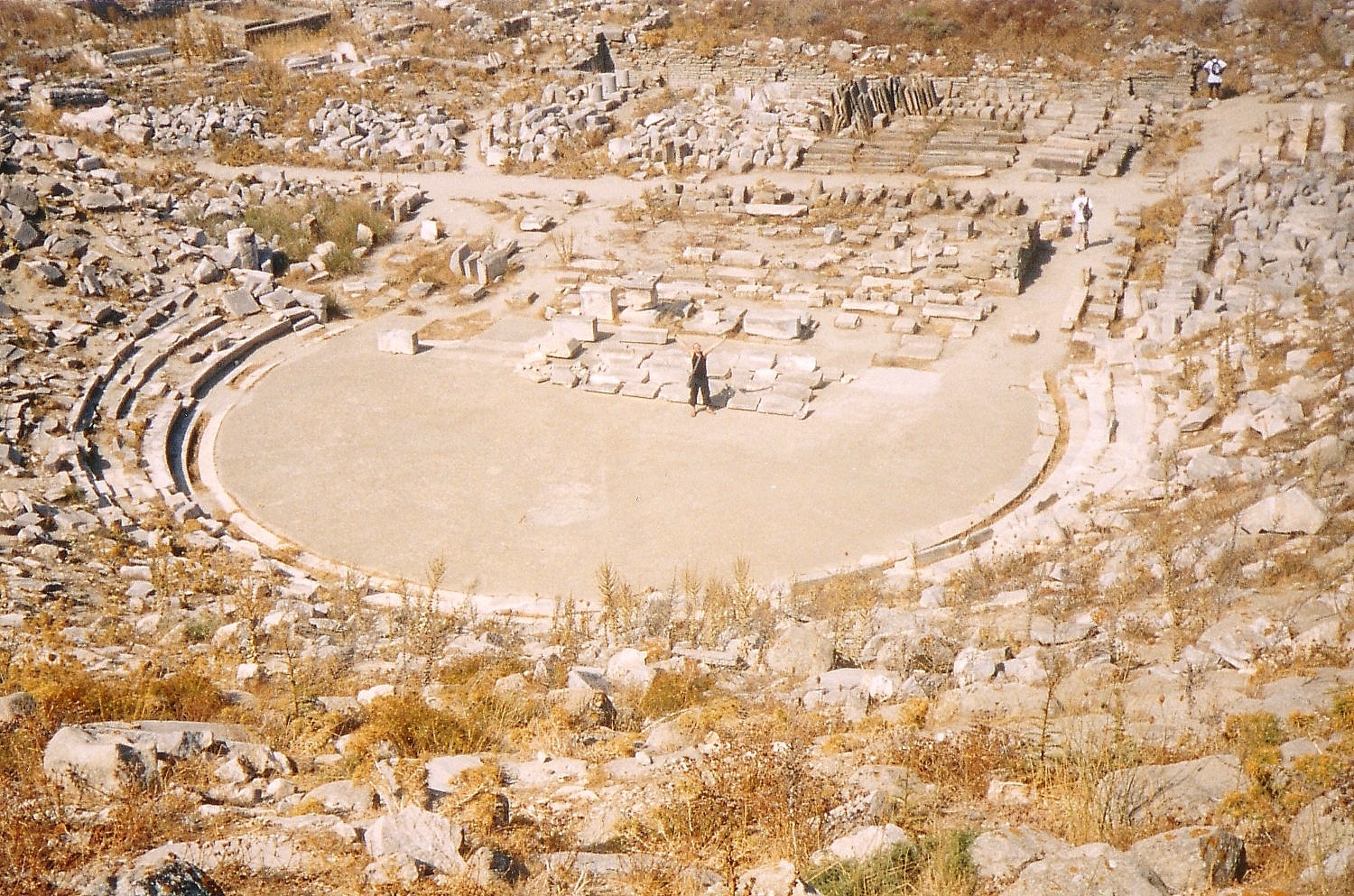 Athens' amphitheatre as seen from above (I'm the black speck in the middle). 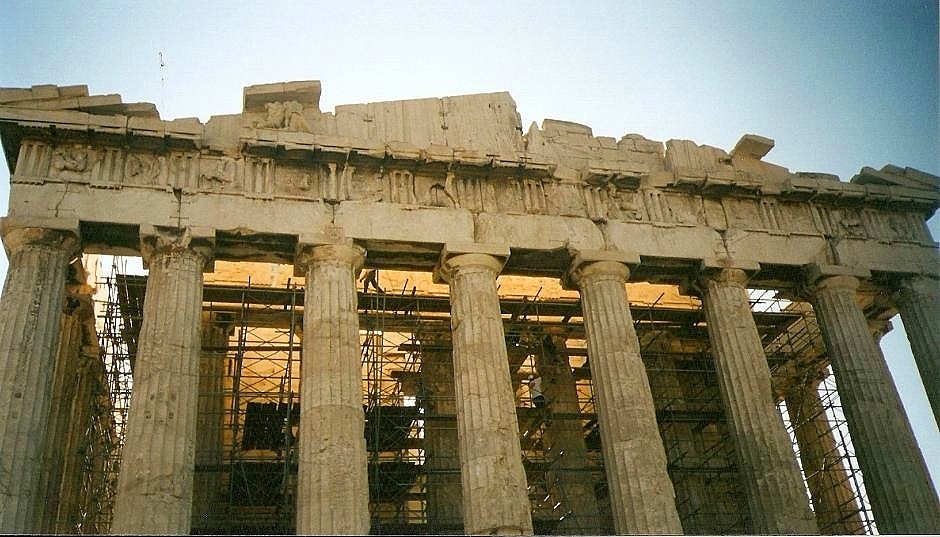 The view of Acropolis Hill and the Parthenon in the sun.

Arriving at each port was a veritable scrum, with desperate islanders hoping to let their rooms, sheds, basements and bedrooms to tourists looking for a bed for the night. We arrived at the island and hooked up with one of the many locals vying for our stay. At Paros, I was bundled onto the back of a truck and whisked to our first place where we would spend the night. It was small outhouse at the bottom of a man's garden. It was pleasant enough - whitewashed walls, clean linen, and, more importantly, an electric fan - an obligatory item in the evening heat of a Greece summer. We then stayed for one night on Antiparos, which was not unlike its sister island; laid back and far more understated than some of the neighbouring brasher islands. Stopping off at smaller islands such as Paros and Antiparos adds a diversity to your journey around the Cyclades.

Overlooking the hills outside the Paros Caves in Paros.

I suppose no island hopping adventure around the Greek islands would be complete without a stop on Mykonos, famed for being Greece's hedonistic party island with a reputation to rival that of Ibiza's. Its fame precedes it and, for this reason, you'll soon find, as we did, that you leave the tranquillity and relaxation of other islands firmly behind. Mykonos may be busy, very touristy and extremely expensive, but this does not mean it is not pretty. Indeed, the view of Little Venice is iconic in its own right, with its pastel-washed cubed dwellings clinging to the coastline Venice-like, their uniforming interrupted only by the domes of Greek Orthodox churches. Also of note are the pink pelicans on the island. In the 1950s a wounded pelican was found by a fisherman off the Mykonos coast. It was taken in-land and nursed back to health and stayed on the island until 1985. It was given the name Petros - a word which translates as Grumpy. Since then, three other pelicans have made the island their home and, as I was to find, are not averse to being stroked.

The view known as 'Little Venice'. It is rather stunning - but old-style photography fails to do it justice. 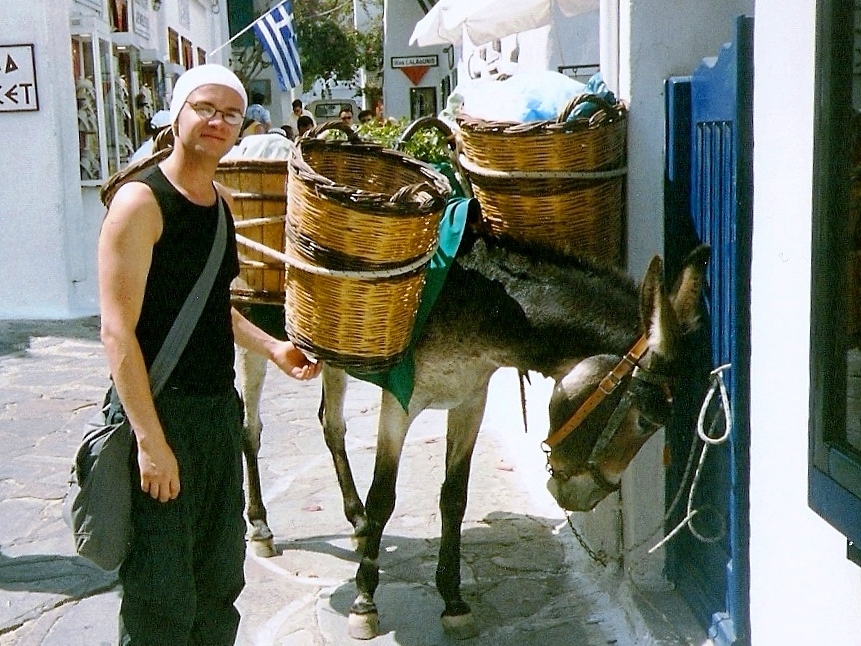 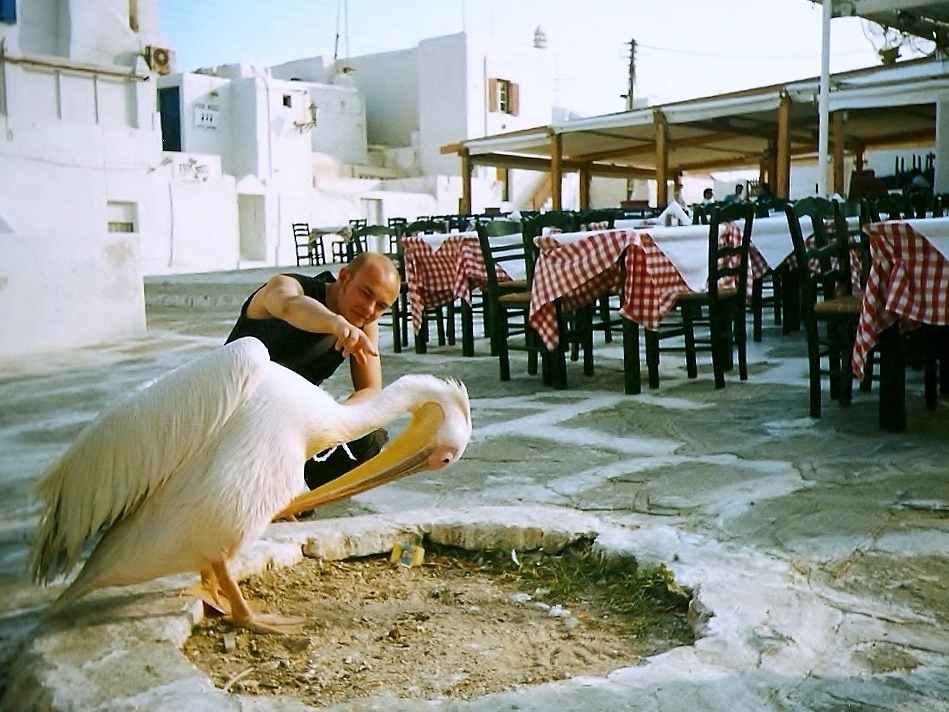 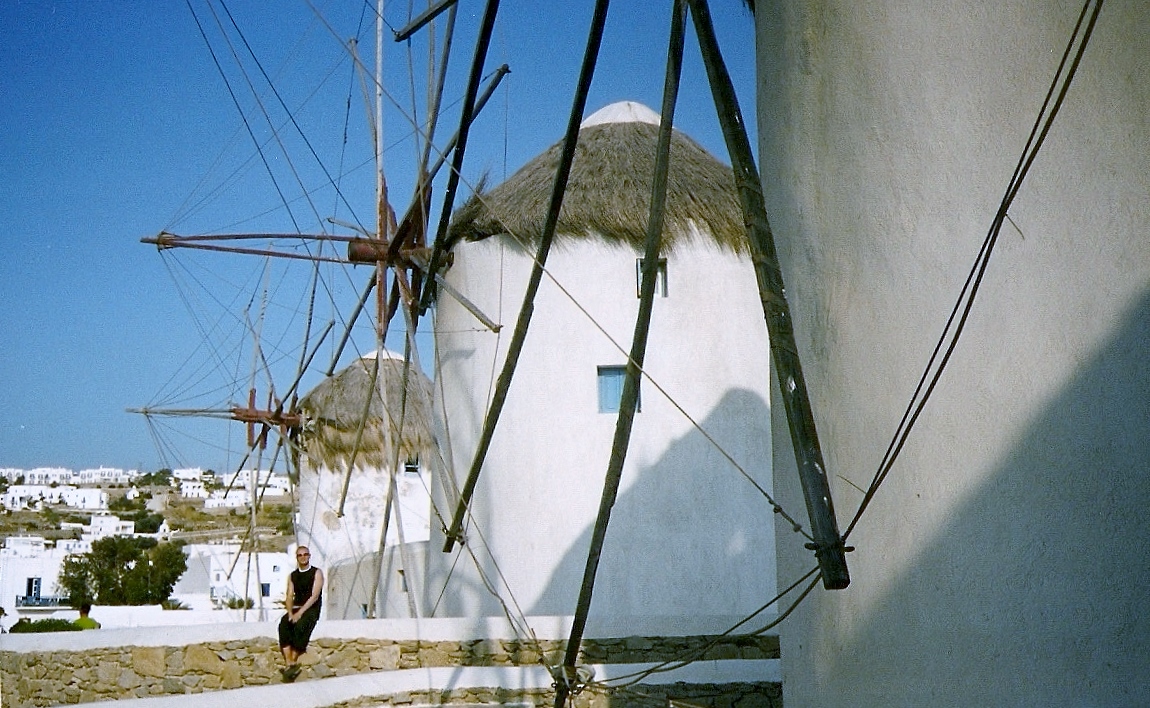 Mykonos' white windmills are as iconic as they are evocative.

A very short ferry journey from Mykonos to Delos (around thirty minutes) brings you to the miniature island of Delos. It's an island with no inhabitants - apart from, that is, the evocative and wonderful Delos lions which date back to an incredibly early 550 BC. They were a gift from the people of Naxos island to Delos as stone guards for the Sanctuary of Apollo. Their neat alignment in rows and general appearance are not dissimilar to the Avenue of the Sphinxes at Luxor Temple in Egypt which I was to visit many years later. Unfortunately the time you can spend with Delos' wonderful stone creations is dictated by the return ferry times - miss the last ferry and spend the night on an uninhabited island.

The delightful Delos Lions on Delos Terrace - a gift from Naxos people to Delos to guard the Sanctuary of Apollo. 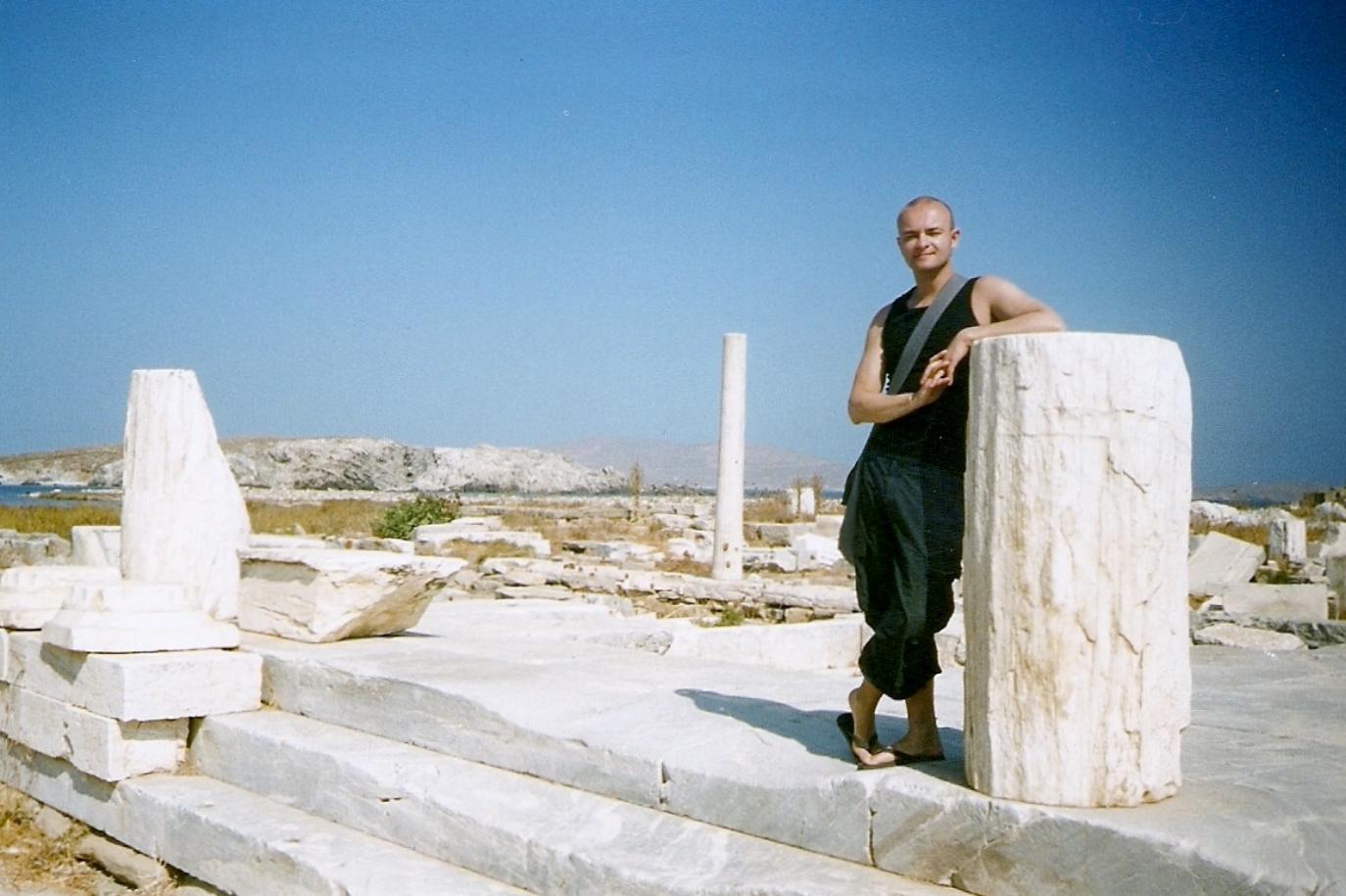 Amid ruins on the Delos Terrace.

Every Greek island, as any Greek themselves or, indeed, seasoned visitor to these islands will attest, all have their own personality. This was no more true than in the case of the mighty Naxos - its looming arch the first thing greeting you as you make your watery approach to the island and which certainly quickened my heart beat with excitement and anticipation. Naxos welcomes the tourists but retains authenticity. It's a local island for local people which, thankfully, hasn't succumbed to the warping influences of visiting tourists. Fishing is at Naxos' heart; it's a memorable experience just to wander up and down the main street to see all species of octopuses and squids hanging from all manner of street stalls, alfresco terraces and restaurants. On display was a very Greek palate. Lacking any sense of adventure (I am not a fan of such sea creatures as my source of sustenance) I was lucky enough to find an eatery which catered to a more Western (for 'Western' read 'boring') fayre, namely pizza. Unashamedly I clung to that restaurant for dear life during my stay on the island. Naxos was an island slightly off the beaten track and, according to Greeks, a more archetypal island in Greece you will not find. Having escaped the terrifying sea creatures by doing a little too much sunbathing, Naxos was also the island where I developed a large red rash all over my hands and face, with the sun making it worse. I nearly fainted following an injection from a private doctor on the island, who proceeded to charge me forty Euros for the privilege. Travel, eh? 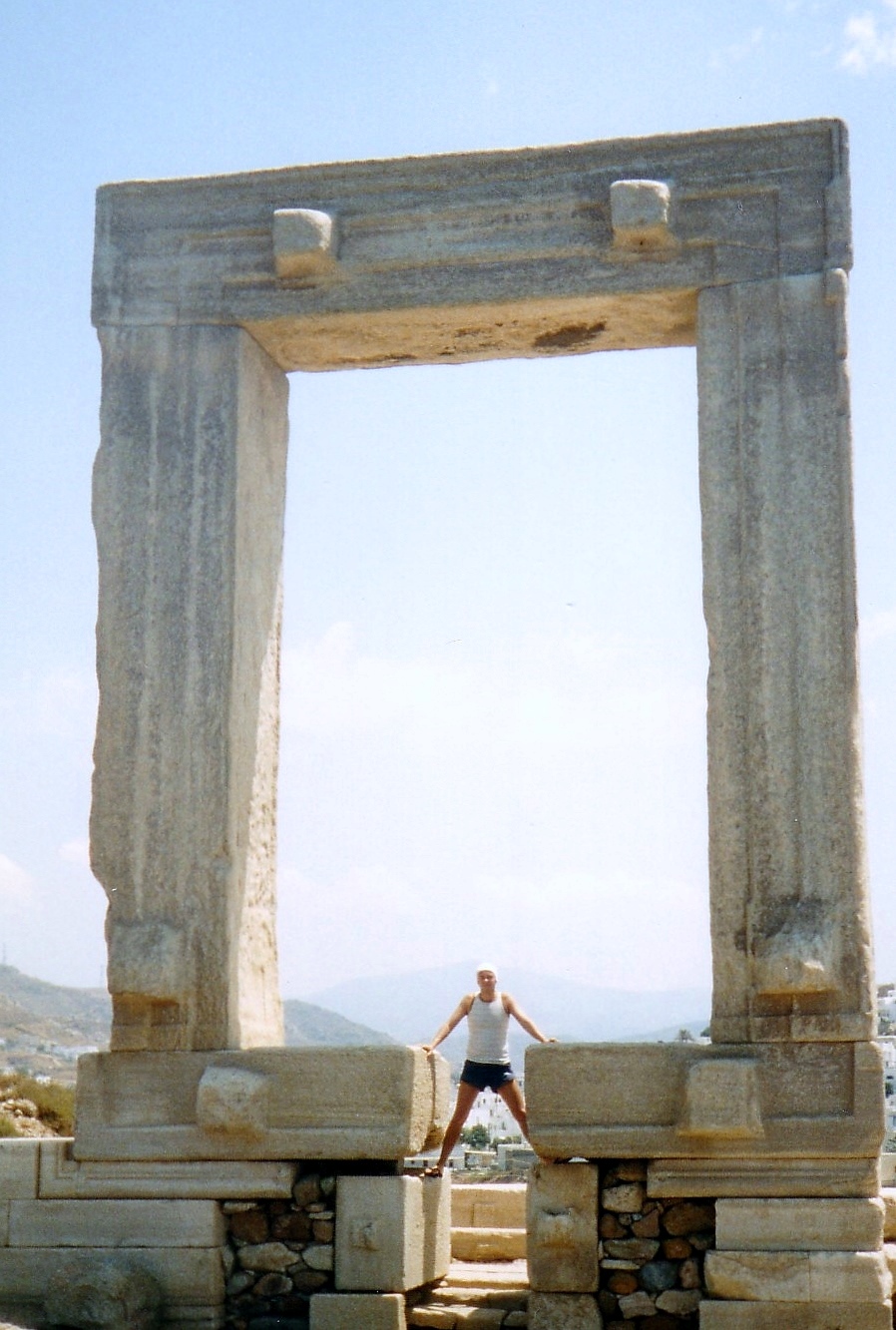 The awesome Naxos arch: the entrance to Apollo's Temple. 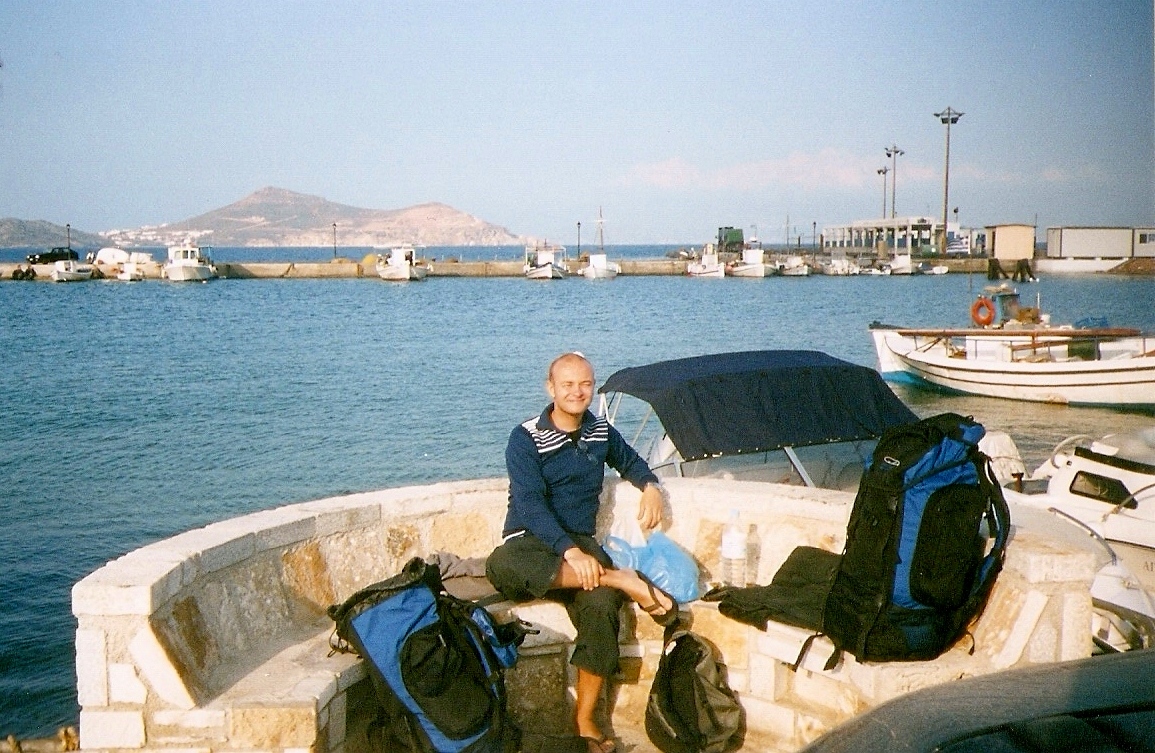 Waiting for the early morning ferry at Naxos harbour. It was delayed - and our pack of cards were a shrewd backpacker move.

Ios was our last island before heading back to Athens. It was  rocky island with beautiful blue-domed Greek Orthodox churches and an impressive amphitheatre. By this time my rash had cleared up but I still had to limit my time in the sun - not at all easy in Greece in August when the principal activity on offer is lounging on a beach reading and relaxing. The purchase of a beach parasol meant that I could still enjoy this most quintessential of Greek past times on Manganari beach without aggravating the rash back into life again. 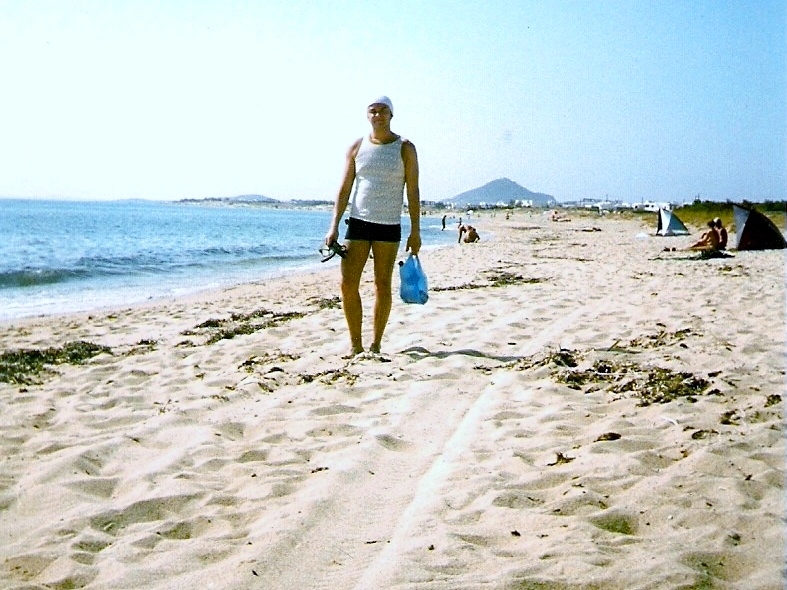 Manganari Beach on the south coast of Ios. 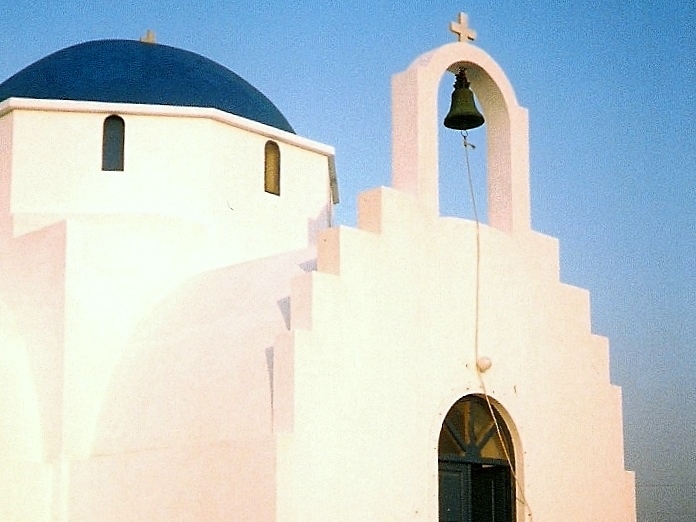