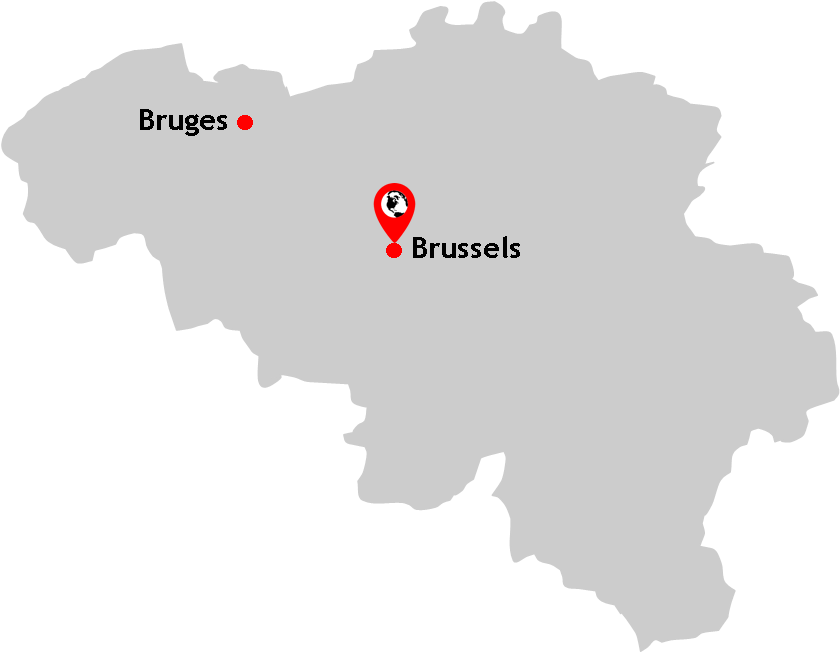 Belgium? So close to the UK shore that it doesn't feel like a real getaway? This was my concern too, but for flights costing £24 return from my local city airport I could hardly complain. The beauty of European travel is that, in no less than an hour and twenty minutes, you can step foot into a new land with a different language(s), currency and culture - a chance to feel thousands upon kilometres of miles away from home when, in Belgium's case at least, you are no more than a paltry 300 as the crow flies. Admittedly, Belgium hadn't featured, at all, in any of my travel plans. I simply had the travel itch, and going somewhere, anywhere was undoubtedly better than going absolutely nowhere at all. I was vaguely curious about Belgium and, I reasoned, I do love European city breaks at Autumn time. There's something about the orangey leaves and that nip in the air, coupled with warming cafés and spending the daylight hours sauntering the streets wiling away the time, which seems to appeal to my inner old man. After over a month of being unwell in bed and therefore struggling to stay in work, courtesy of an unexpected souvenir I picked up in Romania at the end of the summer, the brief trip to Belgium grew ever more appealing as it grew ever closer. The weather forecast predicted cloudy grey skies and rain. So, armed with a second hand copy of the Rough Guide to Belgium, two umbrellas and my trusty camera, we headed into the Flemish wonderland of Bruges and a French-feeling Brussels. Our itinerary in Belgium was extremely tight: we had just over 48 hours, with each day dedicated to sampling a different city at opposite ends of the country.

Belgium is home to a few famous things: waffles, chocolate, the booze cruise, Tin Tin and Snowy, the faceless bureaucracy of the European Parliament and its melting pot of languages. Indeed, Belgium was the only country I have visited so far where entering your PIN number into a payment terminal at a shop counter is preceded by a choice of language options (choose from English, French, German, Dutch). The more serious lesson from this is to note the linguistic, and therefore political, complexity of the country; factions, languages and cultural allegiances coalescing under the relatively innocuous name of Belgium. Perhaps this linguistic and political crossroads makes Belgium the ideal place for such an institution as the European Parliament - a location which embodies the kinds of fissures and fault-lines bound to be played out in the parliament itself? Indeed, a brief exchange with a Flemish woman in the border control area of Brussels airport exposed some of the cultural differences between the Flemish north and the predominantly French south. Whilst commenting loudly as to why all the men in security uniforms intimately touched cheek-on-cheek when greeting, the woman responded to me saying, disparagingly, "They only do this here. I am from Flanders in the north, and men don't do things like that up there". This intimate greeting between men most likely has its origins in France, located on Belgium's southern border.

We touched down at 8 o'clock local time at the rather inauspicious Brussels Charleroi airport in the city's south: small and a little down at heel being, as it is, the cheaper airport used by budget airlines and thus the poor peoples'/smart travellers' entrance in to Brussels. As predicted the sky drizzled but temperature-wise the evening was actually rather mild. Running for various buses and growing in frustration at trying to get the Metro ticket machine to work (note: twist the buttons - don't press), we arrived at the Hotel Thon positively sweating.

My initial impression of Brussels, the crucible of European political power, was not good. It was far grubbier than I had expected. Whilst many areas were well presented, others were covered in graffiti, litter and urban squalor. I had clearly overestimated what a western European country's capital city could look like. Brussels also felt rather impersonal and corporate. Luckily, however, she did have a few impressive gems up her sleeve, which the city's Metro system helped us greatly in getting to. First, the obligatory Grote Markt, or Grand Place, walled in by some of the most overly-decorative architecture I have ever seen. Baroque, Louis XIV and Gothic pieces crowd in at you from four sides and appeared even more menacing in the dimness of a European Autumn. The Broodhuis Museum in particular adopted an ominous, brooding countenance, its face darkening to near-black as day faded into night. An uplifting contrast to Grote Markt's moody historical intensity is the Atomium in the Heysel area of the city, a thrilling one hundred metre fusion of the statuesque and the architectural, most notably characterised by giant silver pods, remarkably containing exhibition spaces, and upon which is reflected the landscape which surrounds. The Atomium is unique in my travel experience and for this reason alone it more than validated our trip to Belgium. Arguably no visit to the Belgian capital could be considered complete without at least catching a glimpse of the European Parliament in the city's Troon district. It's a glass behemoth an impersonal, sparkling palace to Kafka-esque bureaucracy; its imposing nature an unedifying cross between soulless airport and an Orwellian dystopic vision of the future. Its sheer size is both conceited and alien; the kind that left me feeling cold.

And now a departure from the sublime to, arguably, the ridiculous: one of the most perplexing Brussels landmarks is the Manneken de Pis, a small fountain at the centre of which is a boy urinating (the name of this rather uncouth city water feature translates as "statue which pisses"). Indeed, as if this rather vulgar creation on its own wasn't enough, this peeing pre-pubescent is almost ubiquitous in the city; tea towels, posters, ornaments - even rendered in the quintessentially Belgian chocolate. The fountain is said to encapsulate the 'rebellious spirit' of Brussels. However, I couldn't help but appreciate the fountain in a more literal sense being, as it is, more immediately reminiscent of the subways and metro stations in the city which stank of urine. And thus this in/famous iconic symbol of Brussels seemed rather befitting, I recall smugly musing at the time.

Shamefacedly we had just one day to experience Bruges having taken a morning ride on a Belgian Railways train from central Brussels, an affordable, painless one hour journey in each direction. Bruges is a perfect place in which to while away a few hours characterised, as it is, by canals and architecture which stirred travel memories in me from gorgeous European cities like Venice and Amsterdam. It has the kind of personality that western European cities are renowned for: culture, history, beauty. Indeed, it is one of the most perfectly preserved Medieval cities on this side of the continent. Its prissy chocolate boutiques, homely coffee shops, aged cobbled streets, functional wooden windmills, tranquil canalways and soaring Gothic spires make it infinitely photogenic. Luckily for me, the clouds slowly melted away during the course of my day in Bruges meaning I could finally capture some of the city's evocative canal-side architecture with some semblance of blue sky overhead. 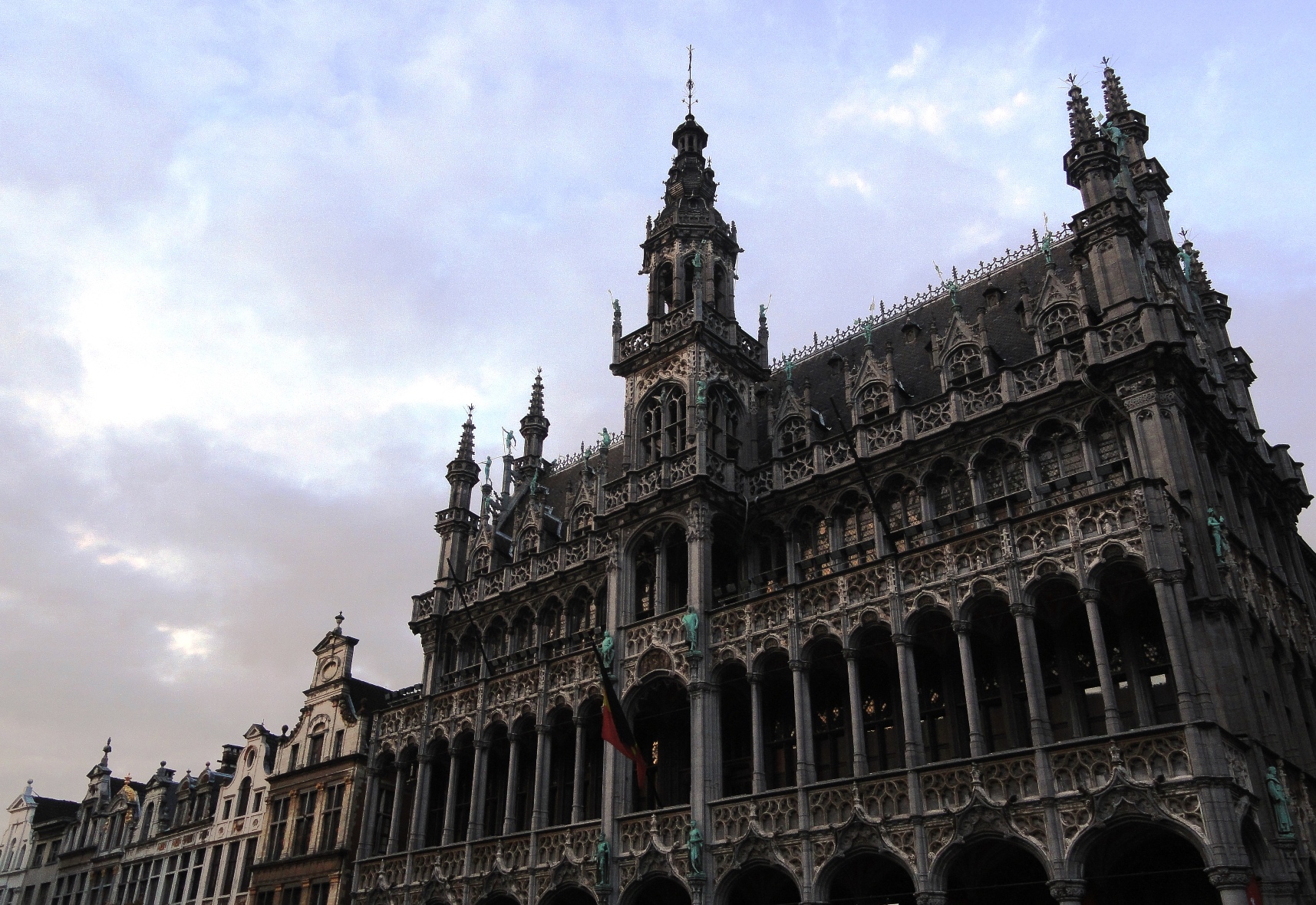 The fantastically ornate Gothic Broodhuis Museum in the Grote Markt. 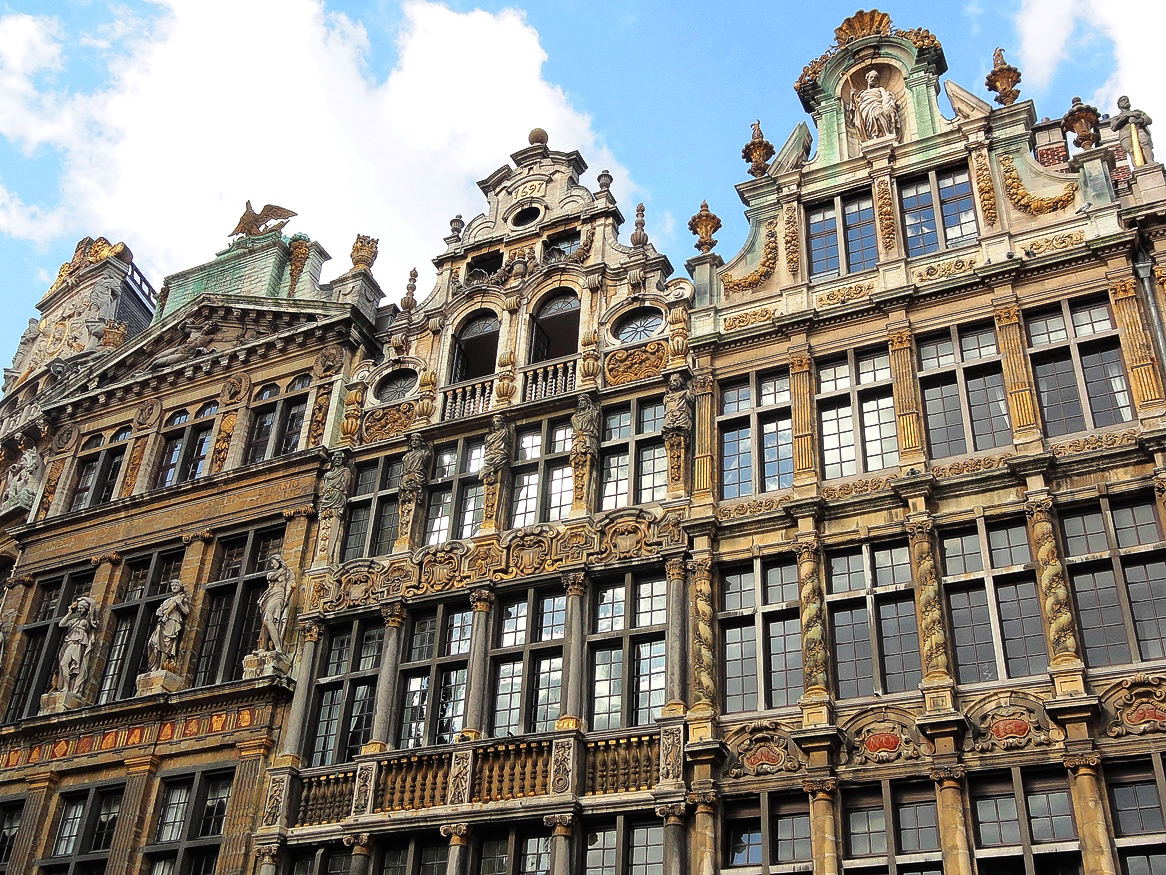 The fascinatingly ornate fascias of the Grote Markt. 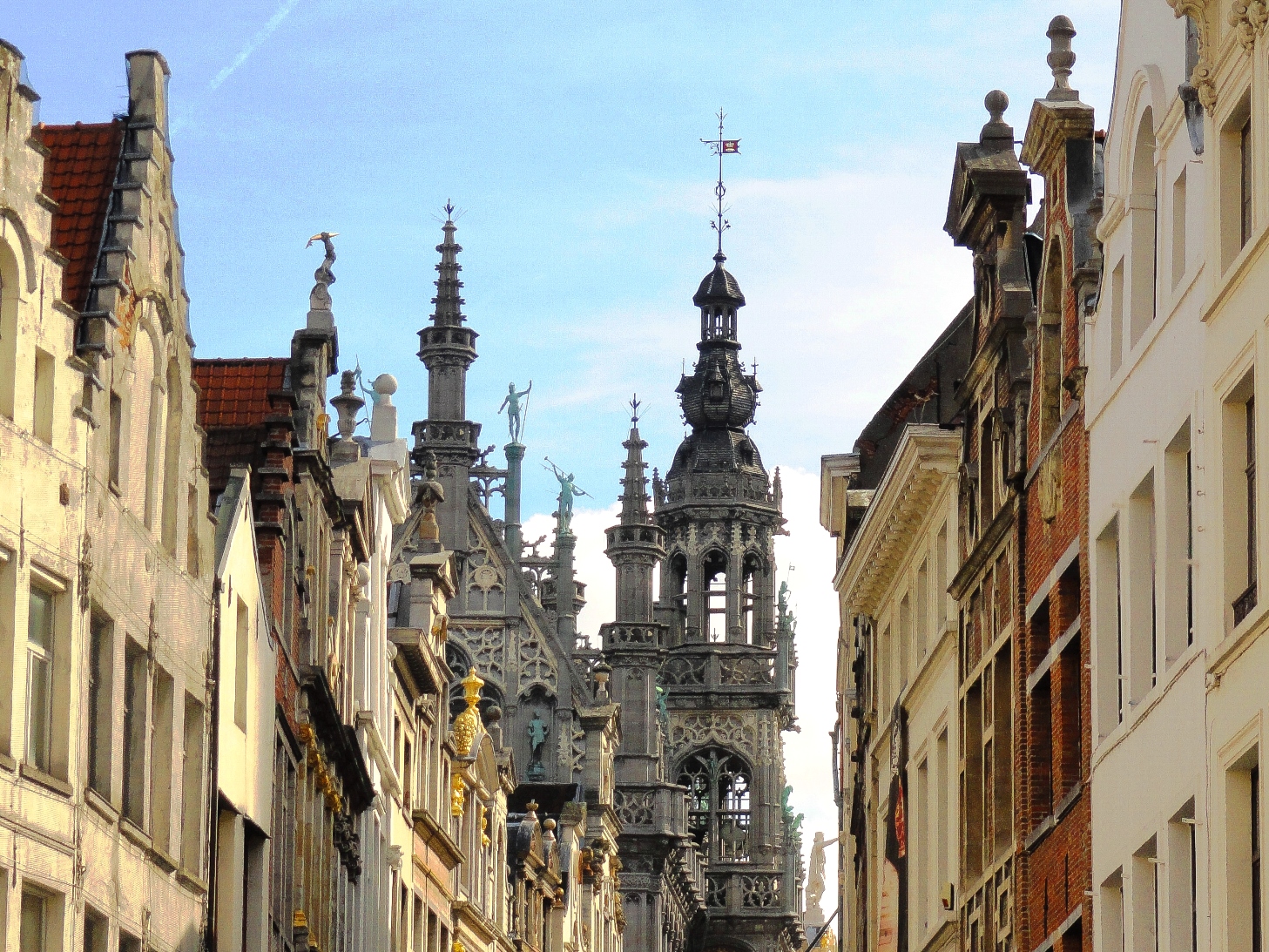 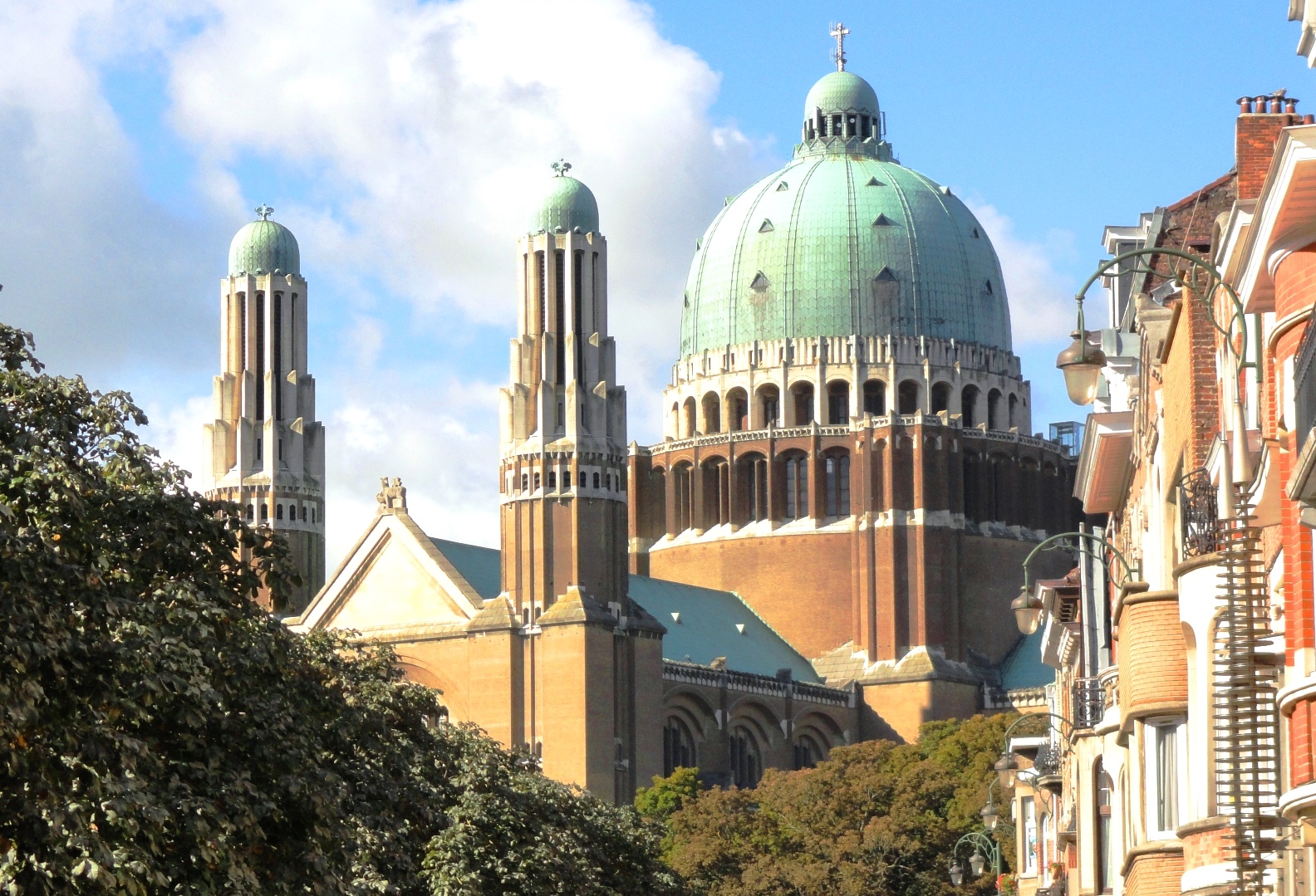 The Basilica of the Sacred Heart. 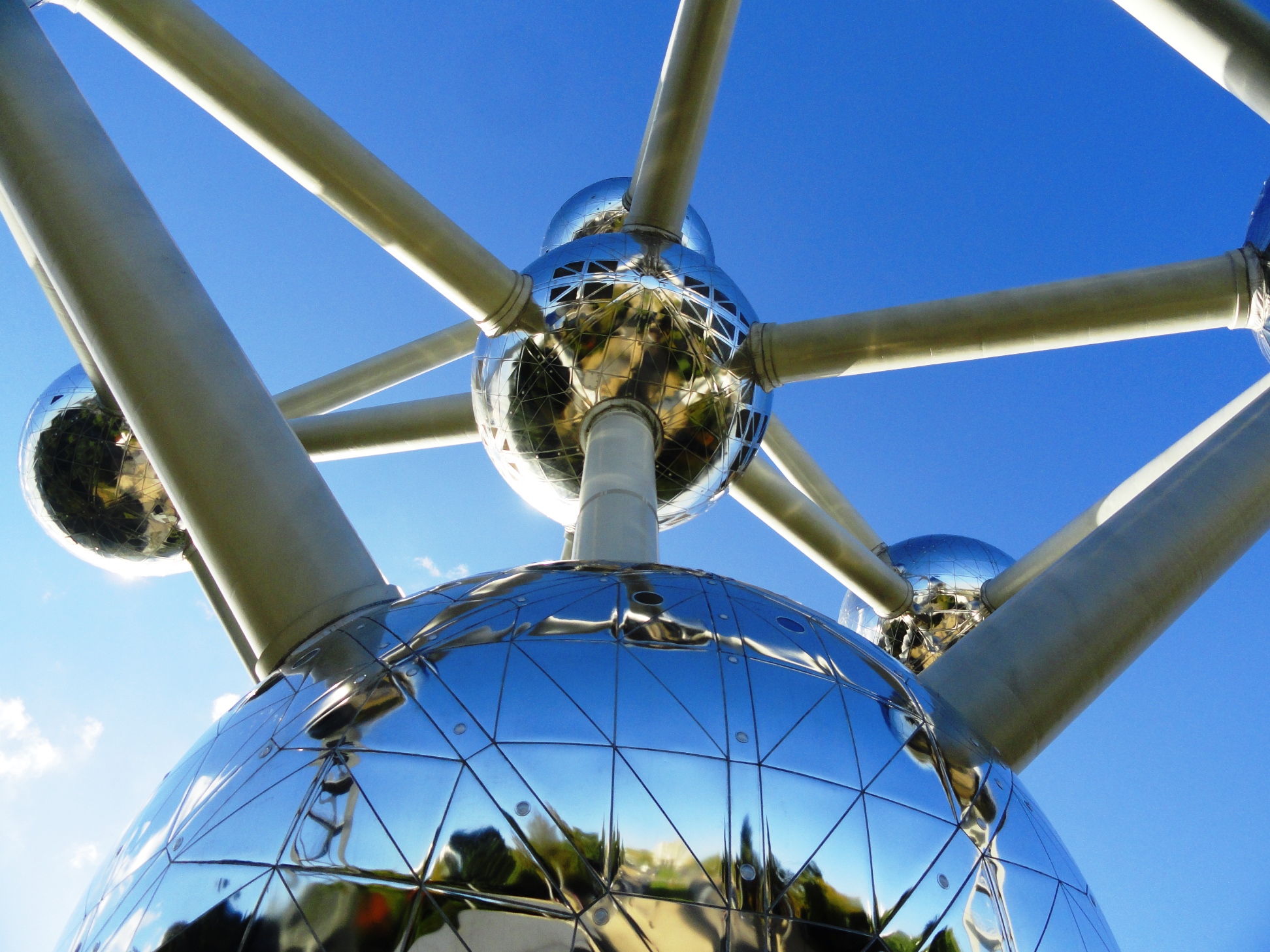 The awe-inspiring Atomium: halfway between architecture and sculpture. Each of the spheres houses exhibits and you travel between the pods by either escalator or lift inside the tubes. 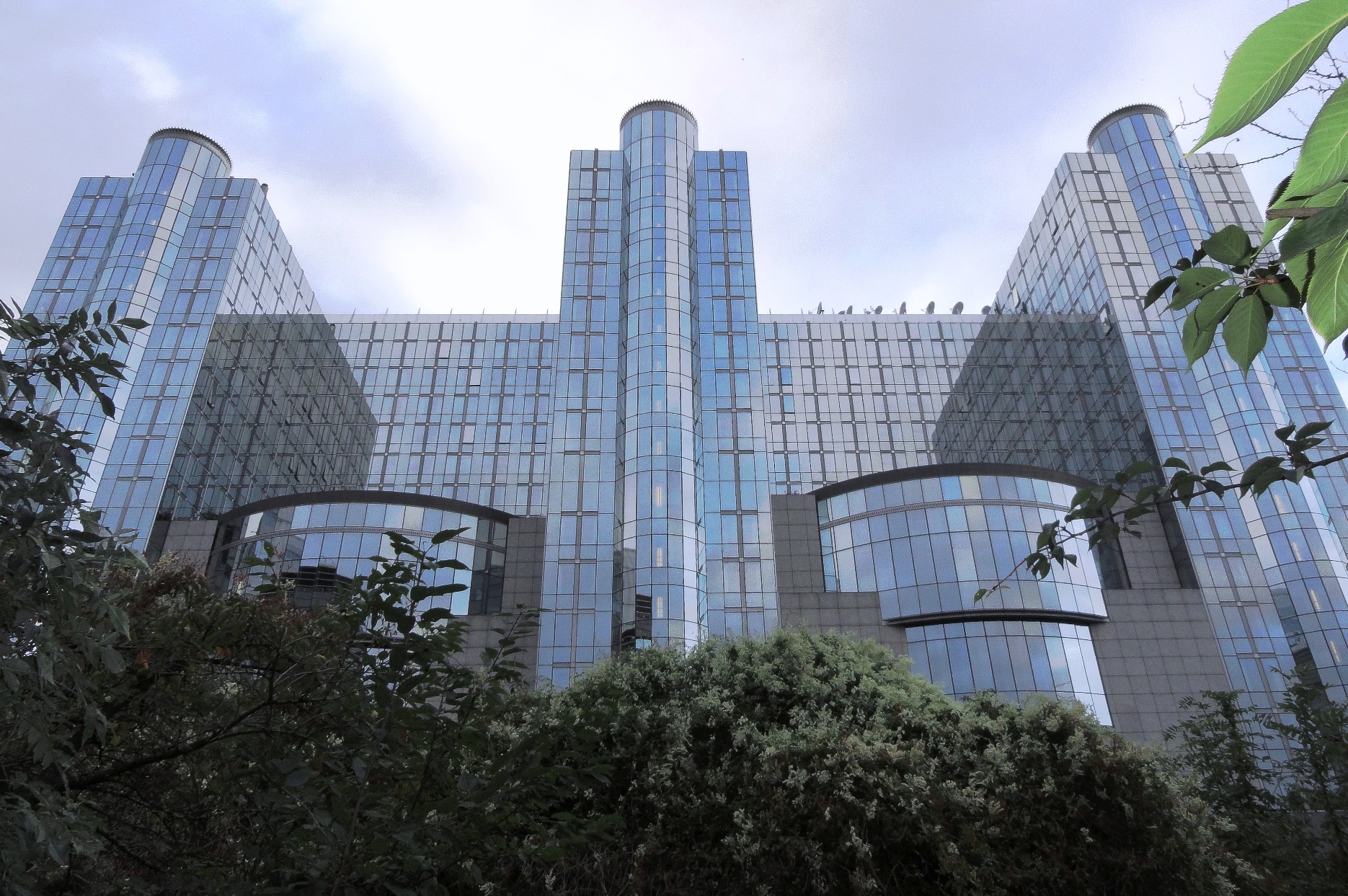 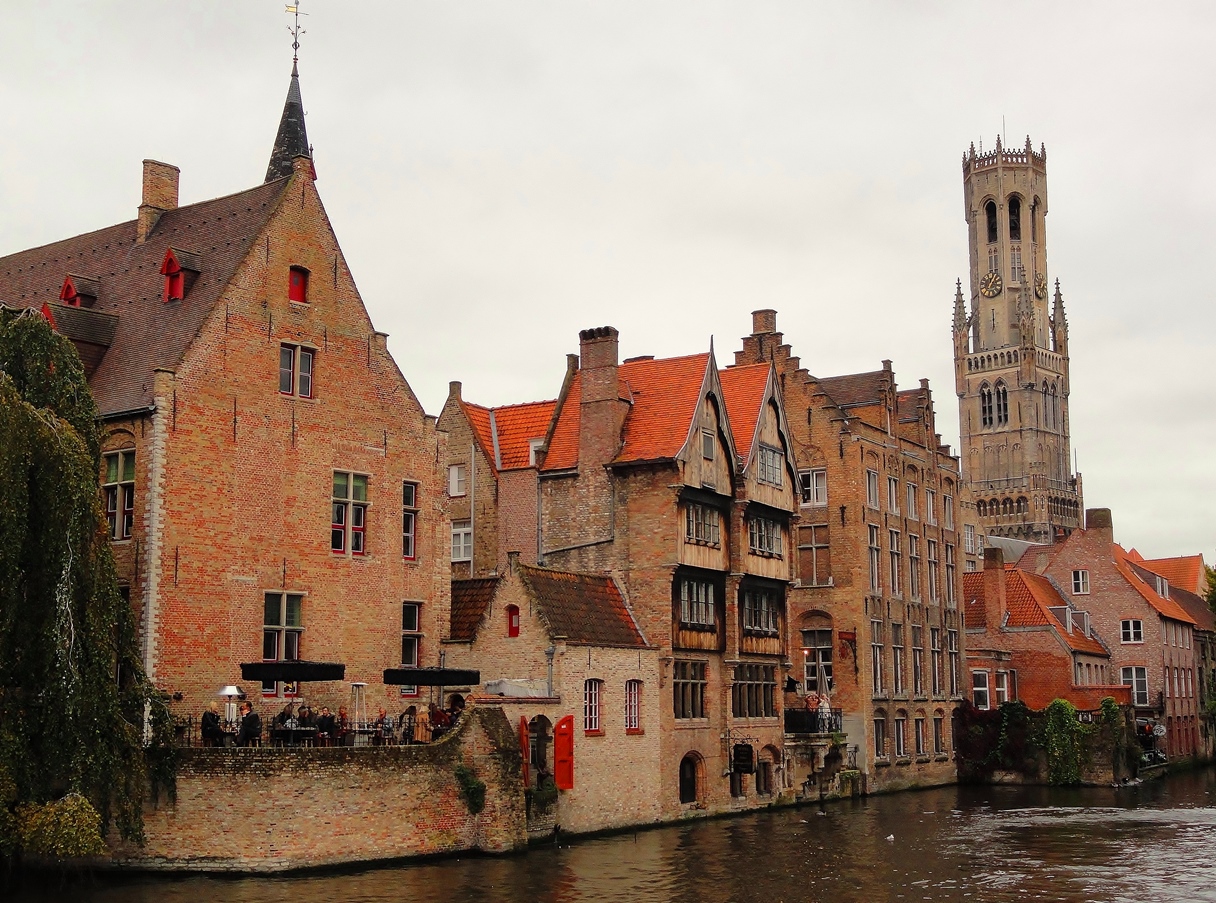 A really delightful view: the Venice-like Bruges with its canal waterways lapping against the foundations of buildings. Dominating is the shot of the Bruges Belfry. Sights like these go some way to justify Bruges' epithet of "Venice of the North". This is the Rozenhoedkaai. 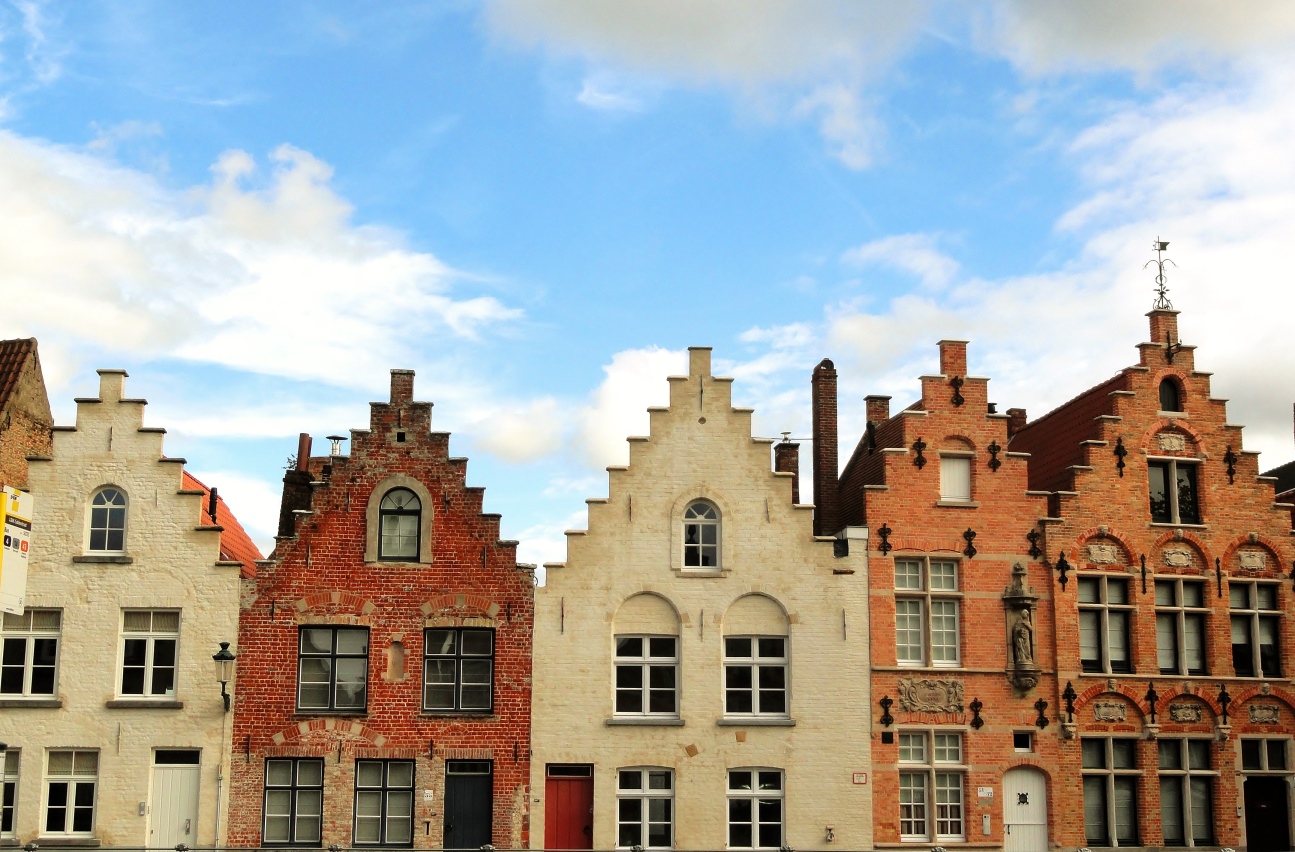 Dutch-inspired architecture along a Bruges canalway. 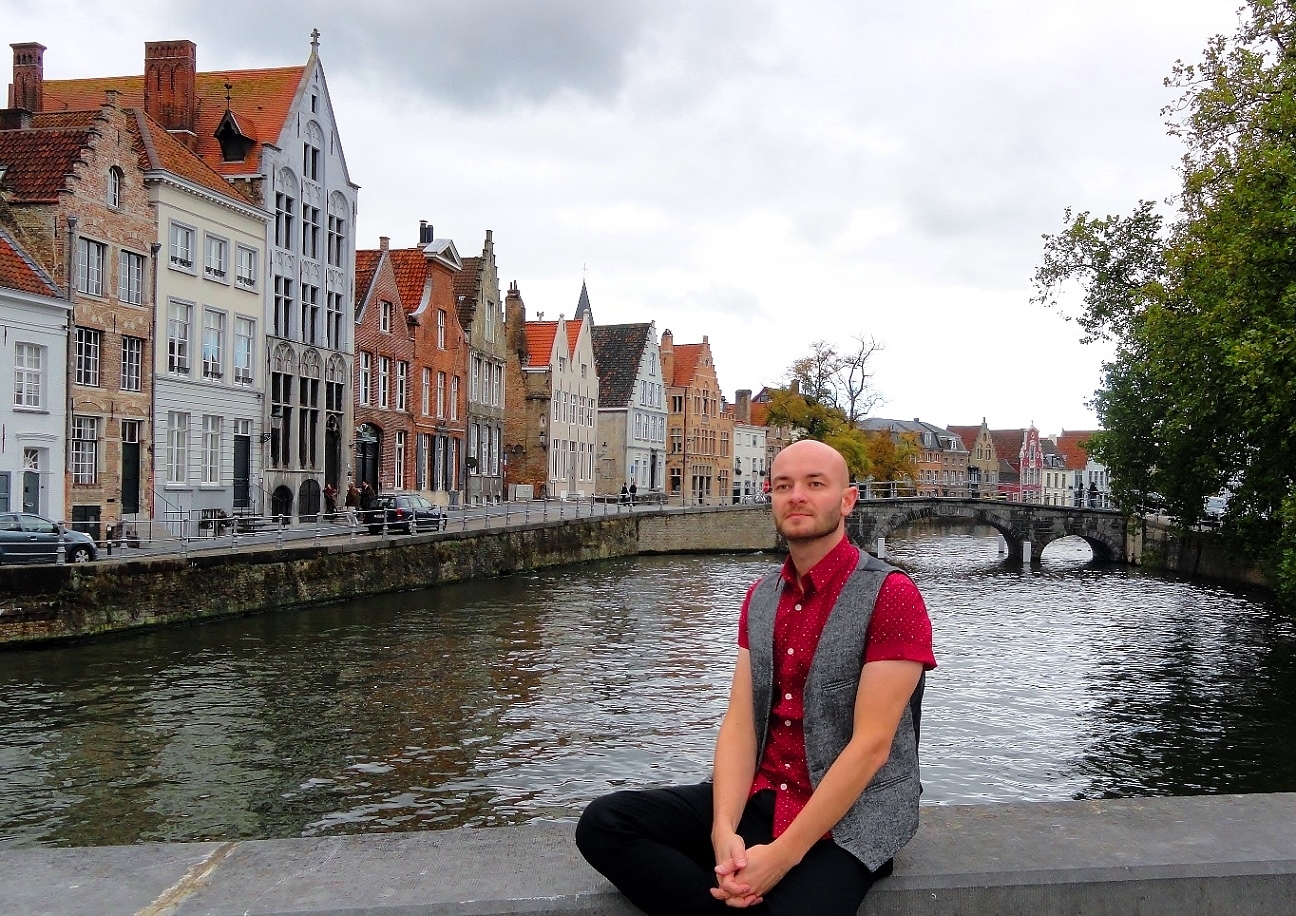 Am I in Venice, Amsterdam or Bruges? The Venice-like Bruges with its canal waterways.