48 Hours in the Capital of the Emerald Isle

Where: Dublin, Ireland. Europe.
When: July 2008
What: Guinness Storehouse, Trinity College, Light Monument, Oscar Wilde’s Former Home, River Liffey, Obligatory Pint of Guinness, Oscar Wilde Memorial, Trinity College and Campanile at the University of Dublin, The Haypenny Bridge, Leinster House, Dublin City views.
How: International flight, taxi, walking.
Country counter: +1 country
Illnesses or mishaps: A heart-stopping race to the airport in a taxi paid for by the railway company whose train had been cancelled - one of the worst airport dashes I have ever experienced as a traveller. We made our flight with only minutes to spare. 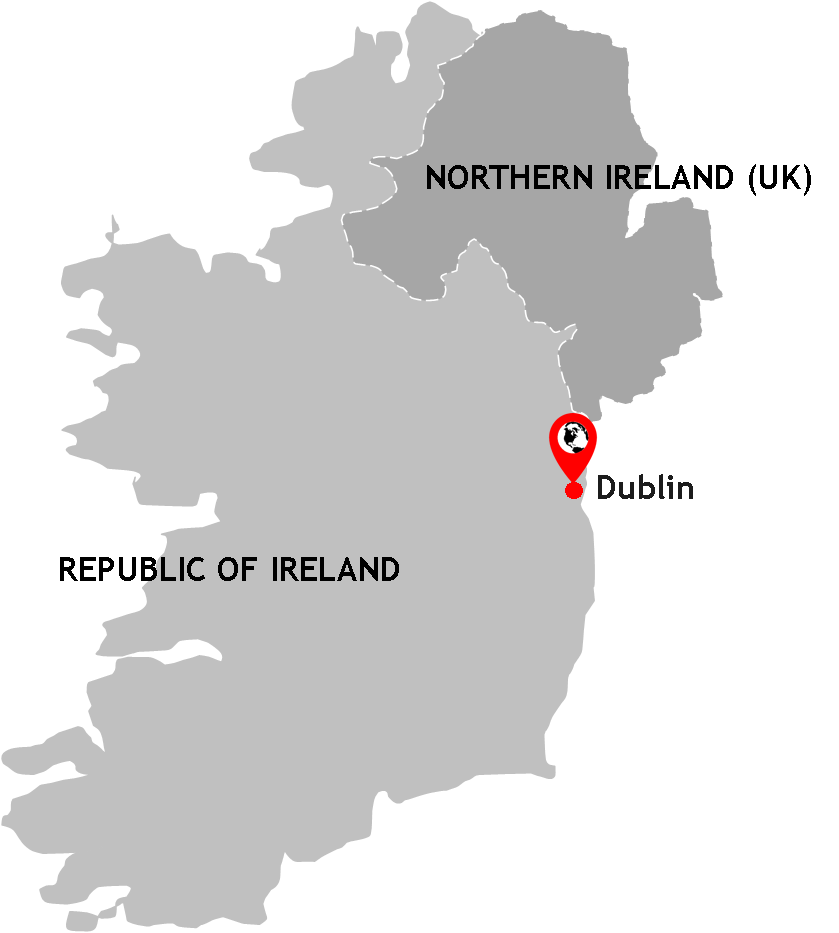 My trip to the capital of the legendary Emerald Isle came about because of an impending long weekend and the issuing of guiltily cheap air tickets by Ryanair which saw us pay no more than £4 return - including taxes. My visit to Dublin, therefore, was more a product of circumstance rather than an actual will to cross the Irish Sea to the epithetic "Land of a Thousand Welcomes". In travel, however, I have learnt to grab opportunities when they present themselves and so Ireland it was to be.

We set off from central London early in the morning, for a cheap flight often means having to get up at a particularly ungodly hour. Unfortunately our train, the first of the morning, was cancelled. We were stranded on the train platform knowing that our weekend away in Dublin was nearly over before it had begun. After vociferous appeals to station staff, the train company threw us all in the back of a black London Taxi, at their expense, to whisk us the one hundred miles or so to the airport. We sped through the dark and deserted streets of a London morning. I took to repeatedly checking my watch as if, by some magical power, doing so would somehow ensure we would make it in time. And we did - but with a matter of minutes to spare. This Destination Chronicle for Ireland, therefore, was very nearly left blank.

We dropped off our bags at the hotel and immediately headed out into the morning hubbub of Dublin, a city which lines the banks of the River Liffey. Our trip to Dublin was so hastily organised that there wasn't much time to research. We didn't have any sort of travel guide with us. After tiring of walking along the shopping streets directionless and purposeless, and after being mildly perturbed by the extraordinary - even absurd - sight of the Spire of Dublin, known disparagingly by locals as "The Rod to God", we located a book store and invested in a copy of the Rough Guide to Dublin. Over a traditional breakfast at a café we thumbed through its pages, folding ones of interest in a bid to put together some kind of feasible itinerary. After such a problematic start to the trip, we were now galvanised and ready to head out into Dublin - second time lucky. We headed down to the River Liffey to see the fairy-tale Haypenny Bridge, a white elegant affair crossing the river which looked not unlike an enlarged human skeleton stretched out across the water. Dublin is a small big city, its human scale somehow a testament to the "Land of a Thousand Welcomes" spirit of the Irish. Glass towers and corporate architecture would be somewhat ill-placed in Dublin for this is a city which reeks of heritage, charm and local warmth.

We pressed on to Merrion Square, the location of the Oscar Wilde Commemorative Statue located not far from the childhood home where the famous writer lived for nearly two decades. Oscar is depicted sitting languidly on a boulder of quartz gazing towards a small statue of Dionysus, a tasteful rendering of a figure deemed by some conservative voices in Ireland as a controversial man undeserving of public acknowledgement let alone full-blown commemoration. It felt right and fitting to see the sculpture, as well as thechildhood home, of Wilde - a writer whose work I had read and valued during my time at University and whose pithy witticisms still resonate and repeat over in my mind to this day. There was also time to experience something of iconic Ireland with a few hours spent at the Guinness Storehouse. Aside from the four leaf clover and the leprechaun dressed in bright green, Guinness is probably Ireland's most famous icon. And so we found ourselves sipping a pint of the black stuff in the Gravity Bar of the Storehouse, which came complete with wonderful views across the city of Dublin. 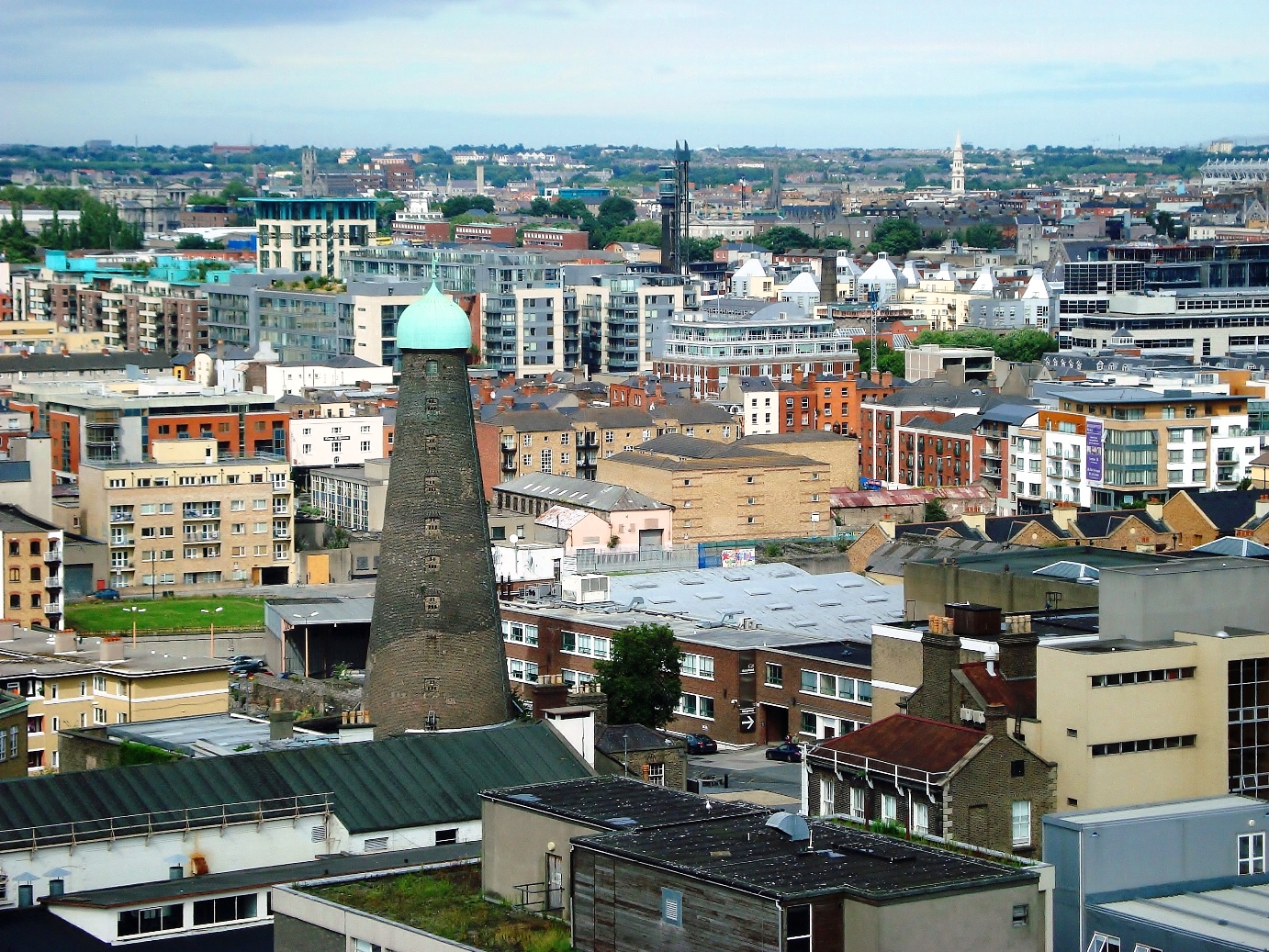 View from the Guinness Storehouse (1).

View from the Guinness Storehouse (2). 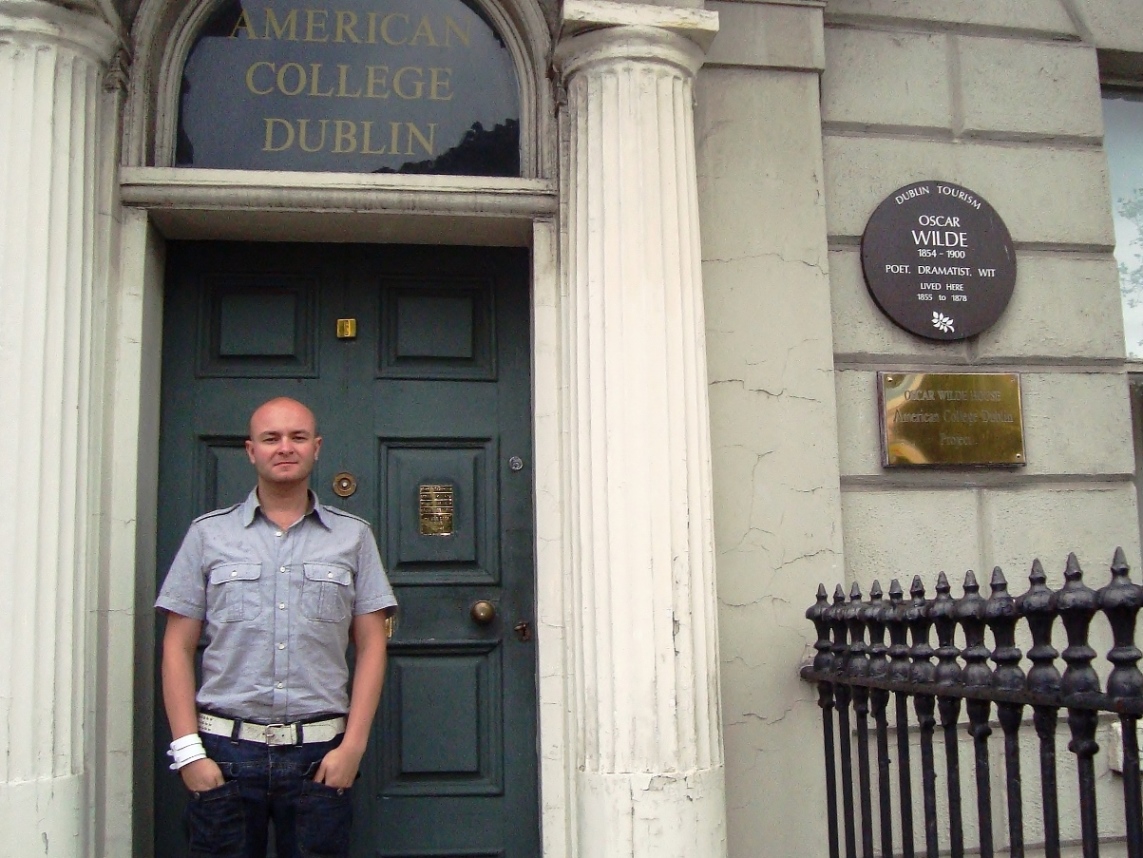 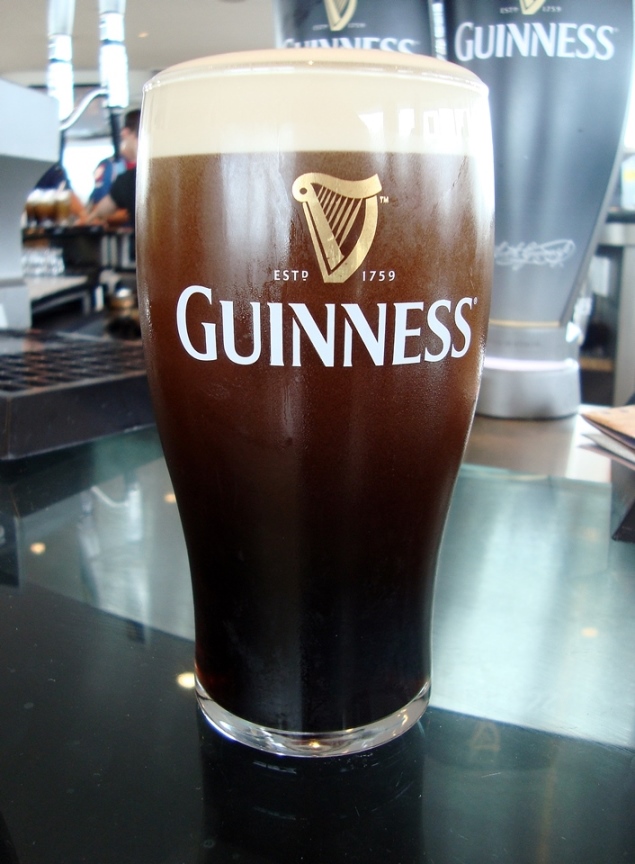 Sipping a Guinness in the Storehouse's Gravity bar. 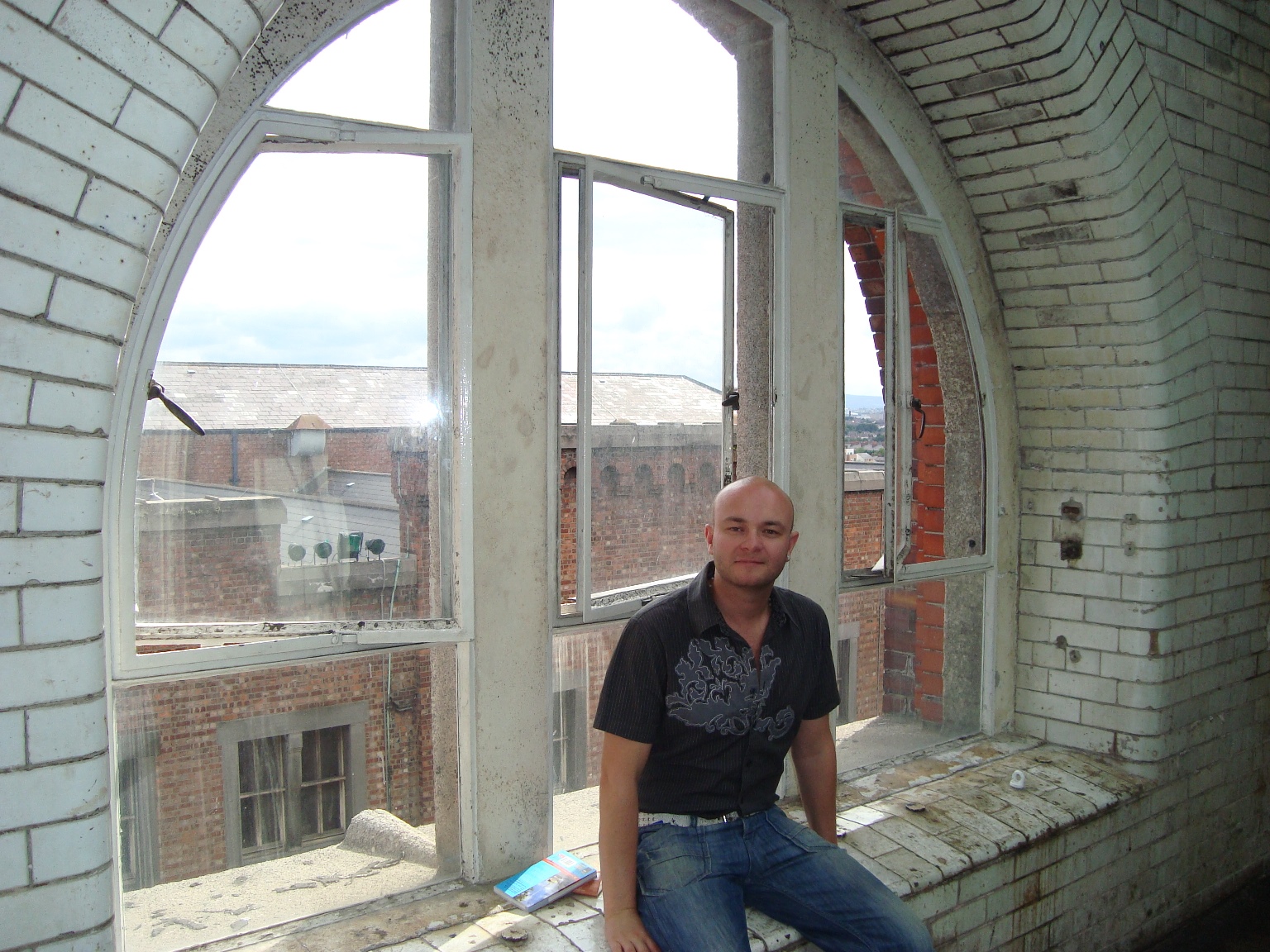 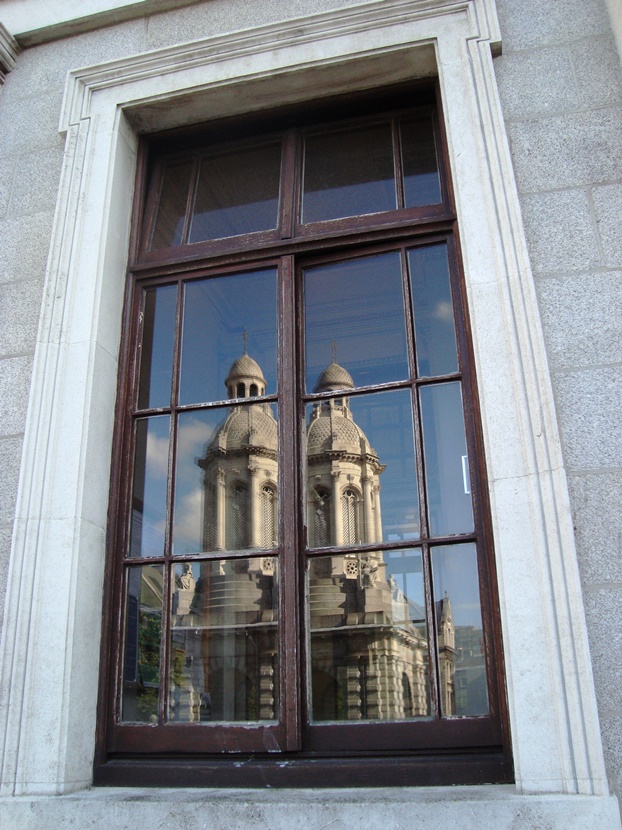 The Campanile bell tower of Trinity College reflected in a nearby window. 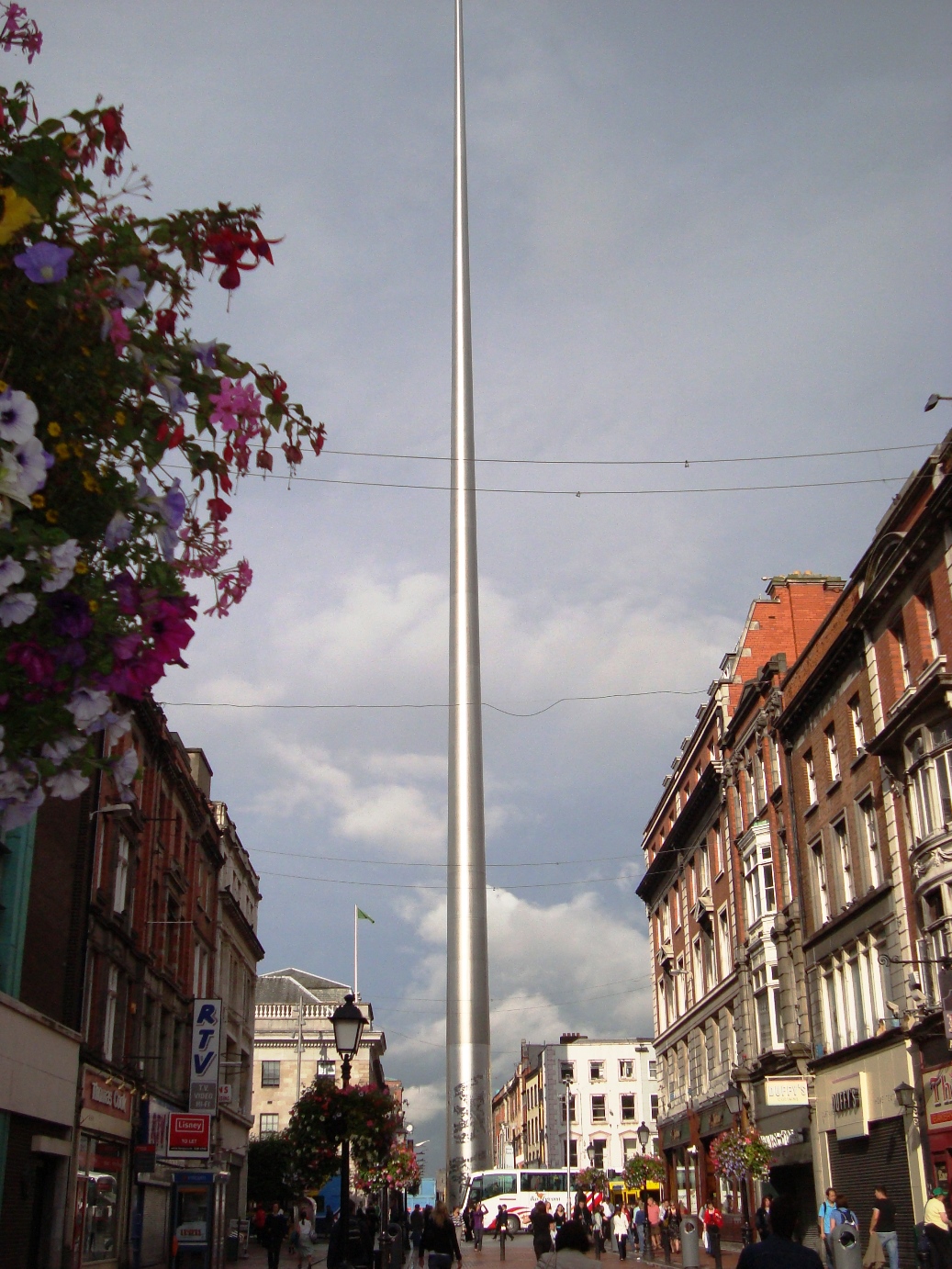 The 120 metre Spire of Dublin, referred to locally as "The Rod to God". 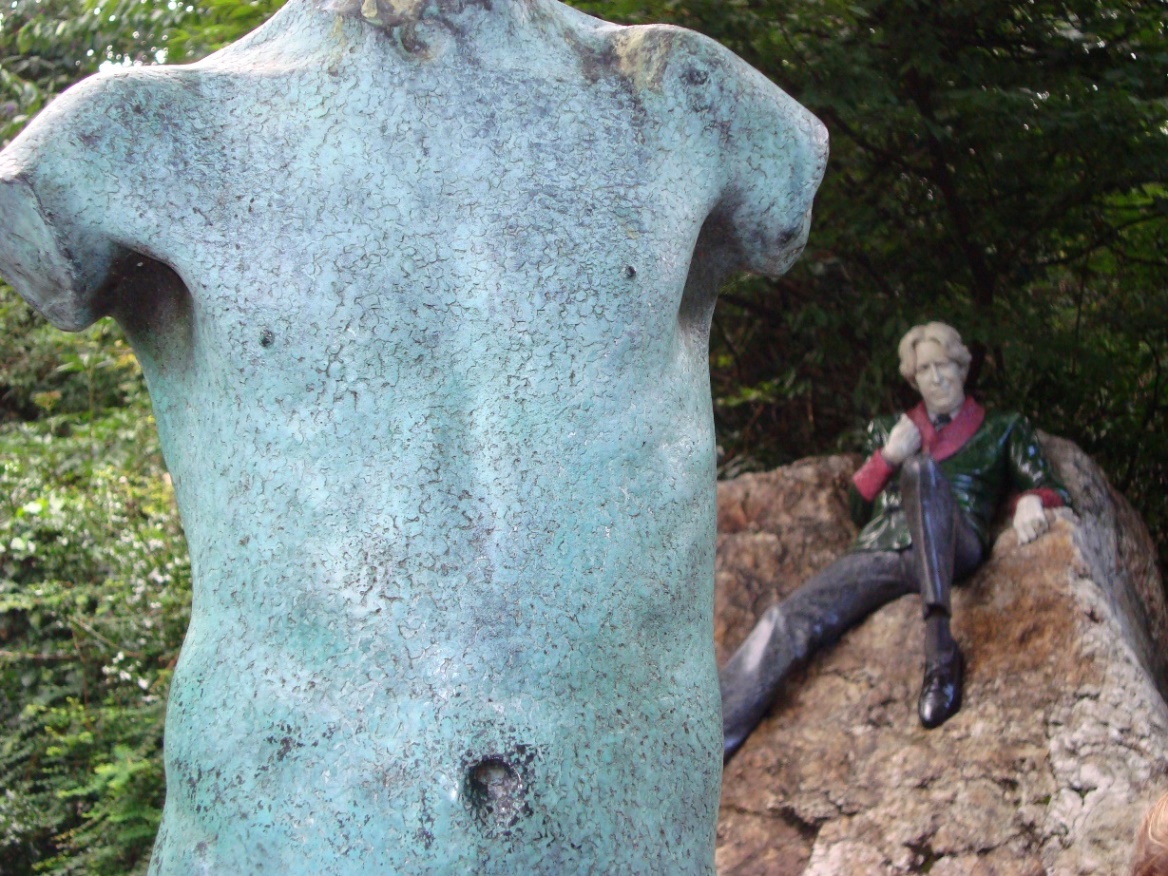 The Oscar Wilde Memorial Statue, known locally as 'The Fag on the Crag'. Wilde lived in Dublin for more than two decades.