I like the Middle East. You definitely get your money's worth as far as this region is concerned: the culture, faith, language and climate differences make it feel very far from home, although proportionally speaking it isn't really. As a male traveller I have had very few problems here - and have often been touched by the respectful welcome I have received. Having been to Jordan, the Palestinian controlled West Bank and Qatar now, I can safely say that the region is one of my favourite - so much more fascinating than yet another trip to another European country? Yes it is a region with issues - but this shouldn't stop you from visiting. It is also a region where it pays off to acquaint yourself with some of the basic do's and don'ts.

Kuwait is a small oil-rich nation on the north eastern edge of the Arabian Peninsula. I am of the age where, unfortunately, the word 'Kuwait' is indelibly stained by the events of the Gulf War of the early 1990s: think Operation Desert Storm, Saddam Hussein, invasion and the desperate bid to re-cap oil wells sabotaged by an Iraqi army in full-blown retreat. Travelling solo, and flying via the Doha hub in Qatar, this trip was about setting the record straight, about seeing the country beyond the news flashes of the 1990s. For me, these events have served to give Kuwait a certain mystique and a degree of intrigue. Of course, you are a true 'alien' in Kuwait. There are very few white people around and so I stood out like a sore thumb. This does not mean that people stared; they have seen plenty of white-skinned folk sporting their casual clothing and sweating like pigs in the humidity many times before (primarily British and US expats working in the oil industry). The heat, in May time, is almost unbearable, made all the more so by my having to wear trousers instead of shorts as these are deemed culturally too informal to be acceptable in public spaces. Temperatures reached 44 degrees and 'dropped' to 37 at night. If you're unaccustomed to how this feels just imagine a hair-dryer blowing directly into your face and you'll get the idea. Indeed, many well-to-do Kuwaitis seek cooler climes from May to September by escaping abroad. The unforgiving climate also goes some way to explaining the car oriented nature of the Kuwaiti capital - it's just too hot to walk anywhere.

As a consequence the Kuwait City area isn't really geared towards pedestrians; pavements are either rendered hazardous by building materials, covered in sand from recent sand storms or they just disappear altogether, leaving silly tourists marooned in a sea of zooming motors. I stupidly opted to walk the three kilometres from my hotel in the Wattiya district to the iconic Kuwait Towers on the coast. I made it - but only just. After grabbing a few snaps of the spiky, bulbous structure, I dived into the nearest mall and ended up being pitied by restaurant staff; I was dripping in sweat, my shirt soaked through and sweat running down my back. I bought the largest bottle of water they had and drank the lot. It was an intended 'take away' purchase but staff proffered a seat and let me cool down. They even offered me free salad from the buffet - but I don't know why. Perhaps I just have one of those pitiable faces? After half an hour of cooling time I opted for a taxi straight back to Wattiya, courtesy of the mall receptionist who arranged one for me. I tried to tackle Kuwait's midday heat and ended up running back to my air-conditioned room with my tail between my legs. Whilst some would worry about you visiting Kuwait, primarily because of its reputational hangover from the 1990s, the reality is that your biggest danger here in May is heatstroke and dehydration. Don't walk anywhere for very long if you can help it - jump in a taxi. They are relatively cheap.

Kuwait City is hot and dusty with seemingly hundreds of non-descript towers, none of which are likely to win any architecture awards any time soon. In amongst these generic constructions are some wonderful architectural offerings which are either daring or which offer creative re-workings of traditional Islamic architecture. The striking Liberation Telecommunications Tower is the second tallest building in the city and so-called because it was finished in 1993 - not long after the Iraqi invasion. It is supposedly the fifth tallest communications tower in the world. It became a bit of a friend, helping me orientate myself around the city as all the other buildings appeared indistinguishable from one another. Just like the Kuwait Towers, this was, unfortunately, closed for "renovations". It would have been nice to view Kuwait City from above but you can't have everything! Also of international significance is the sandy coloured Al Hamra building - the tallest sculptured building in the world and the tallest in the country. The Grand Mosque, the National Museum and National Assembly of Kuwait are also worth the long walk along Arabian Gulf Street which, if you are lucky, will reward you with a light breeze off the coast. Kuwait City's visual landscape is accompanied by an auditory one. The obligatory call to prayer sounds five times per day, starting at 3am and becomes a bit of a soundtrack to your visit. Bring some earplugs if you want your sleep uninterrupted! There is also no escape at the airport, where the call to prayer sounds as you line up to check in - a little surreal. I like the call to prayer - it's rather visceral and, at around 9pm, gently lulled me to sleep in my hotel room.

My second and final day was spent taking it a little easier. Hiring Naseem, a chatty taxi driver who listens to the BBC World Service religiously, I picked off the key sights still left to see. There is the playful modern interpretation of mosque architecture that is the Fatima Mosque with its emerald pyramid, the very stripy and very cool funnel-shaped water towers, and the wonderful Al-Mubarakiya Souq in the heart of the city. Wandering around the souq is a quintessentially Arab pastime. Not only is it a complete car crash of sights and smells but it's also welcomingly cool during the day. The Arabian love of the air conditioned Mall with boutique shops and expensive brands is, arguably, a modern-day reinvention of the traditional souq. The souq is also a great place to get a little closer to locals. Buying an obligatory banana as my traveller snack of choice (always a safe bet) I was asked where I was from. A thumbs up and "very good, very good - welcome" met my answer of "UK - England". This is a common response to anyone heralding from the UK - one of the Allied countries which helped in the liberation of Kuwait (it also extends to a free visa too!) The fruit seller charged me a little less for my banana as a gesture of good will because I was from the UK. Naseem, my driver for about an hour and a half, also had a similarly hospitable disposition: "I don't want to barter - just pay me what you think is best" was his reply to my question of "how much?" which my Lonely Planet guide had insisted I ask at the start of the taxi ride. Never before have I been in a country where a taxi driver lets the passenger pay what they think is best! Both of these gestures, along with a whole host of others I experienced during my time, are testimony to the fact that the Middle East is a welcoming and hospitable place to travel - important if, like me, you are travelling on your own. Kuwait seems to successfully marry traditional, faith-based values with a modern outlook. Some of the creative interpretations of the mosque, like the Pyramid Mosque in the Salmiya district, is evidence that the traditional and modern need not be mutually exclusive: in fact, they appear to complement each other perfectly.

The Al-Mubarakiya Souq retains a feeling of history in an otherwise bland city landscape cluttered with medium-sized glass towers, misleadingly long boulevards, and hot, dusty pavements. Go to the fish market to see an array of crabs and fish of all shapes, sizes and kinds. Go to the spice hall and go to the meat hall, all of which offer an authentic Arabian experience in an otherwise modern city. It's also the perfect place to grab a souvenir or two under the watchful gaze of the Royal Family, whose images are postered throughout the warren of lanes and draped in Kuwaiti bunting. My little escape from all of this culture was a branch of Costa Coffee in the Sharq area of the city. Not exactly authentic Arabia - but air conditioned, great coffee and high-speed wifi! This branch of Costa was also home to a member of staff who thought I should ditch my teaching job in England and teach in tax-free Kuwait for the British Council!

Never one to avoid a country which many would probably choose not to visit, I packed my rucksack for the Kuwaiti capital and in doing so clocked up my 56th country. It was also a personal record for me being, as it was, the furthest I have ever travelled solo-style. Welcome to Kuwait... 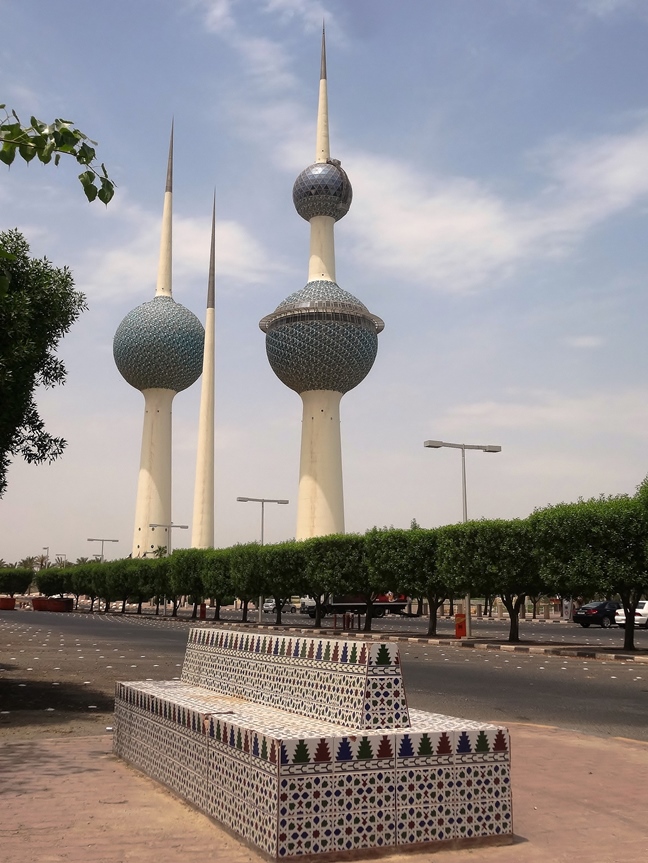 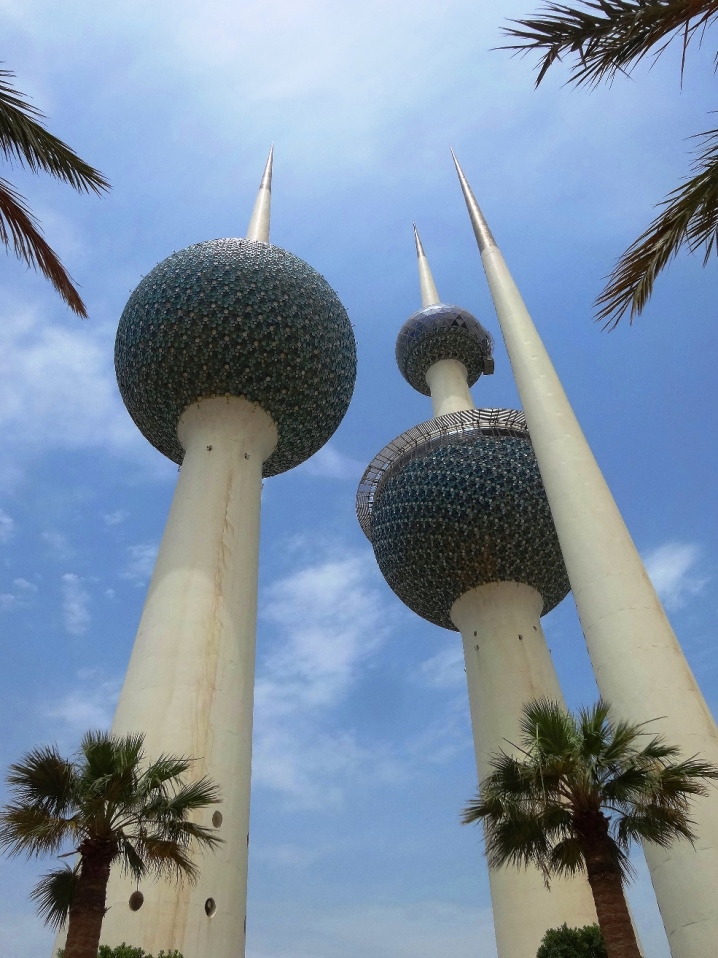 The Kuwait Towers are the undisputed landmark of this tiny Gulf state. 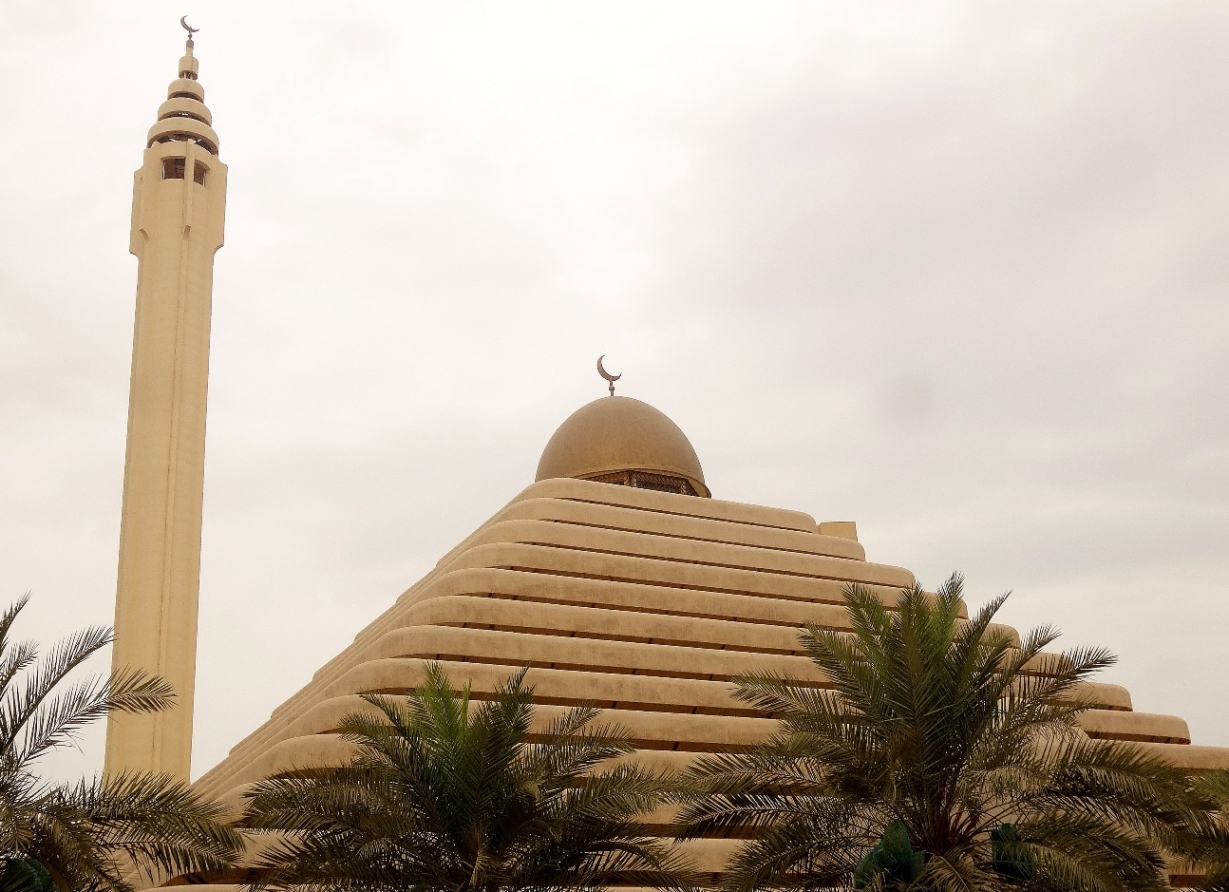 The famous Pyramid Mosque in the Salmiya district of Kuwait City with its unmistakable Egyptian design. 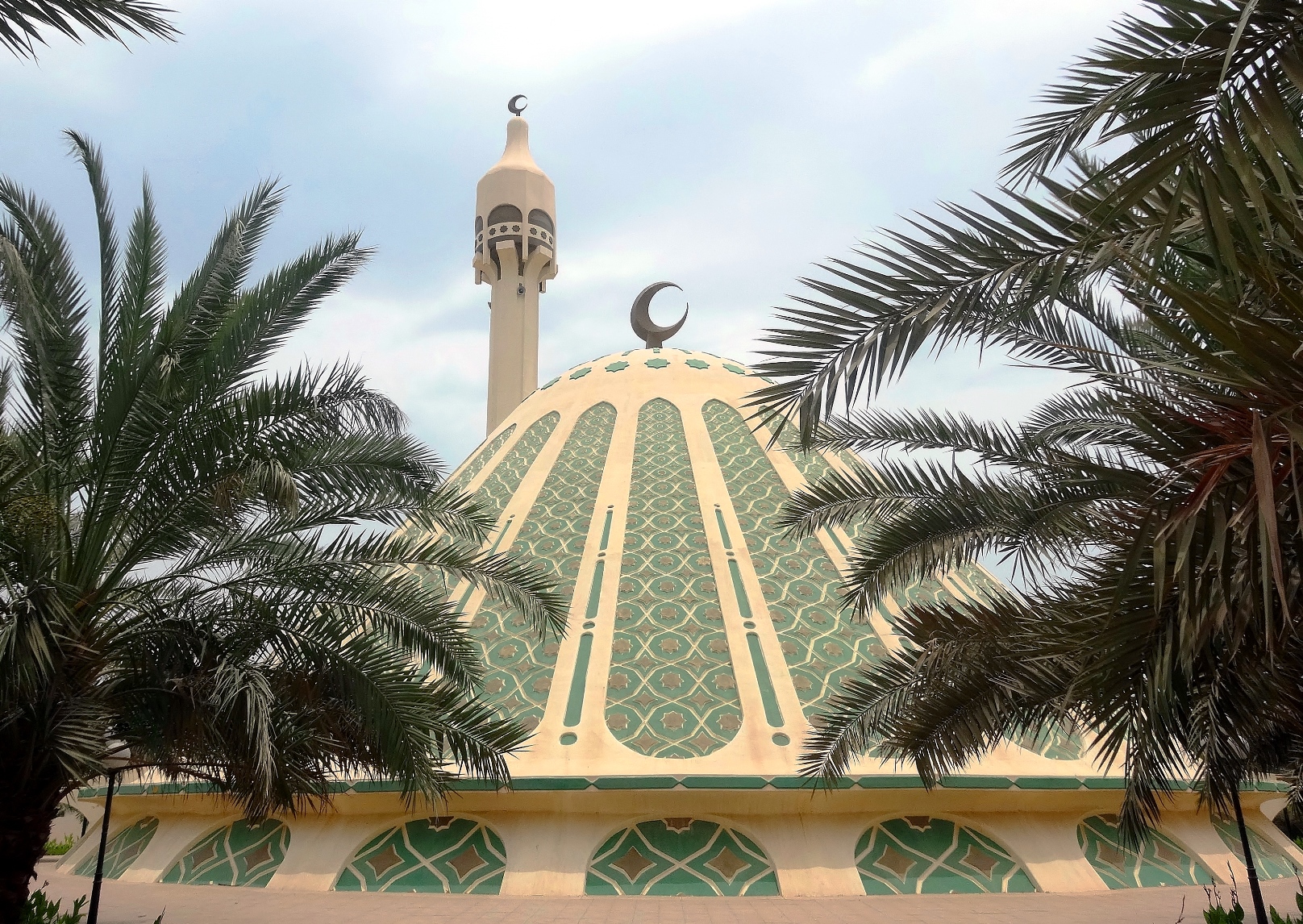 Fatima Mosque : the playful modern interpretation of mosque architecture that is the Fatima Mosque with its emerald, mushroom-like pyramid. 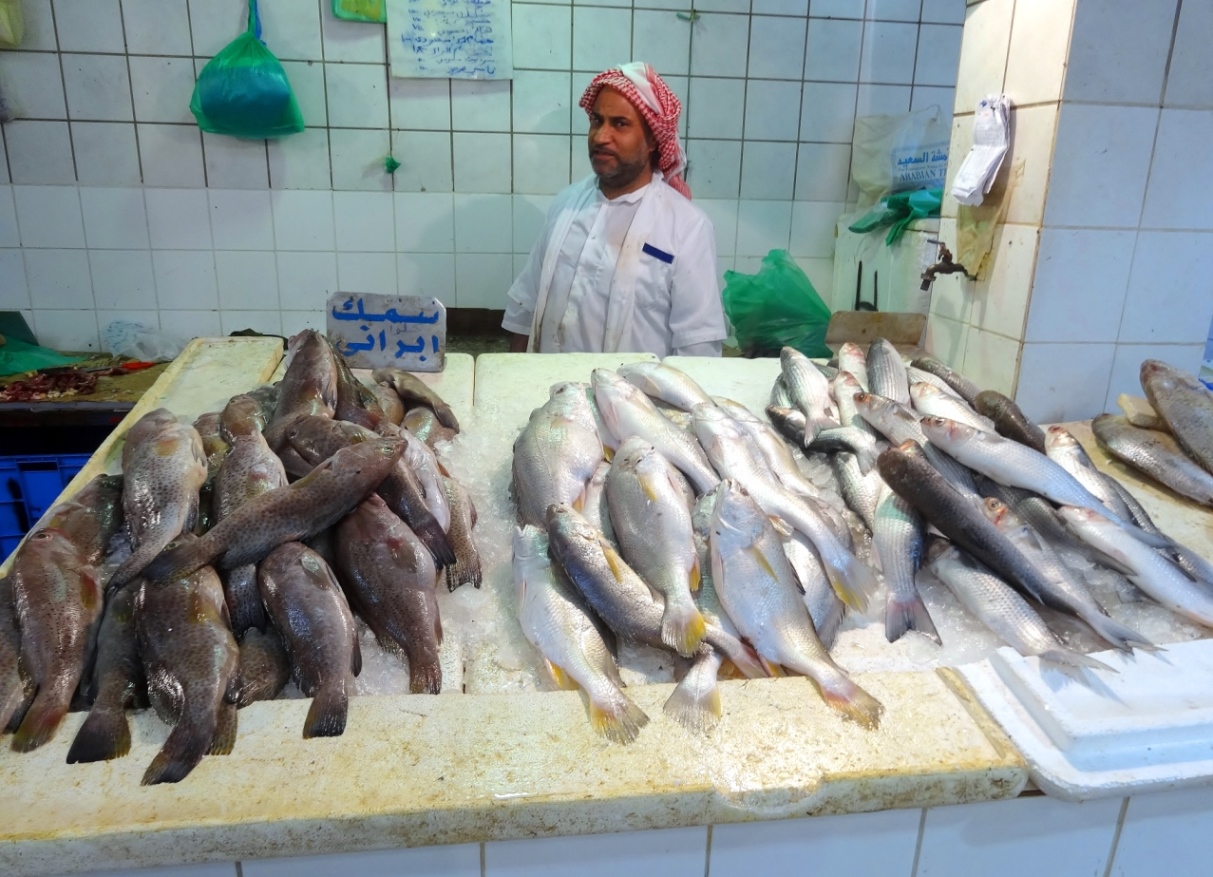 Inside the Al Mabarakiya Souq's fish market where you can see dead versions of an array of crabs and fish of all shapes, sizes and kinds. The man is wearing the traditional head dress of the Ghutra. In Kuwait, the red and white and pure white are the most common forms of headdress. Right, Kuwaiti bunting dresses figures of the Kuwaiti Royal Family inside the souq. 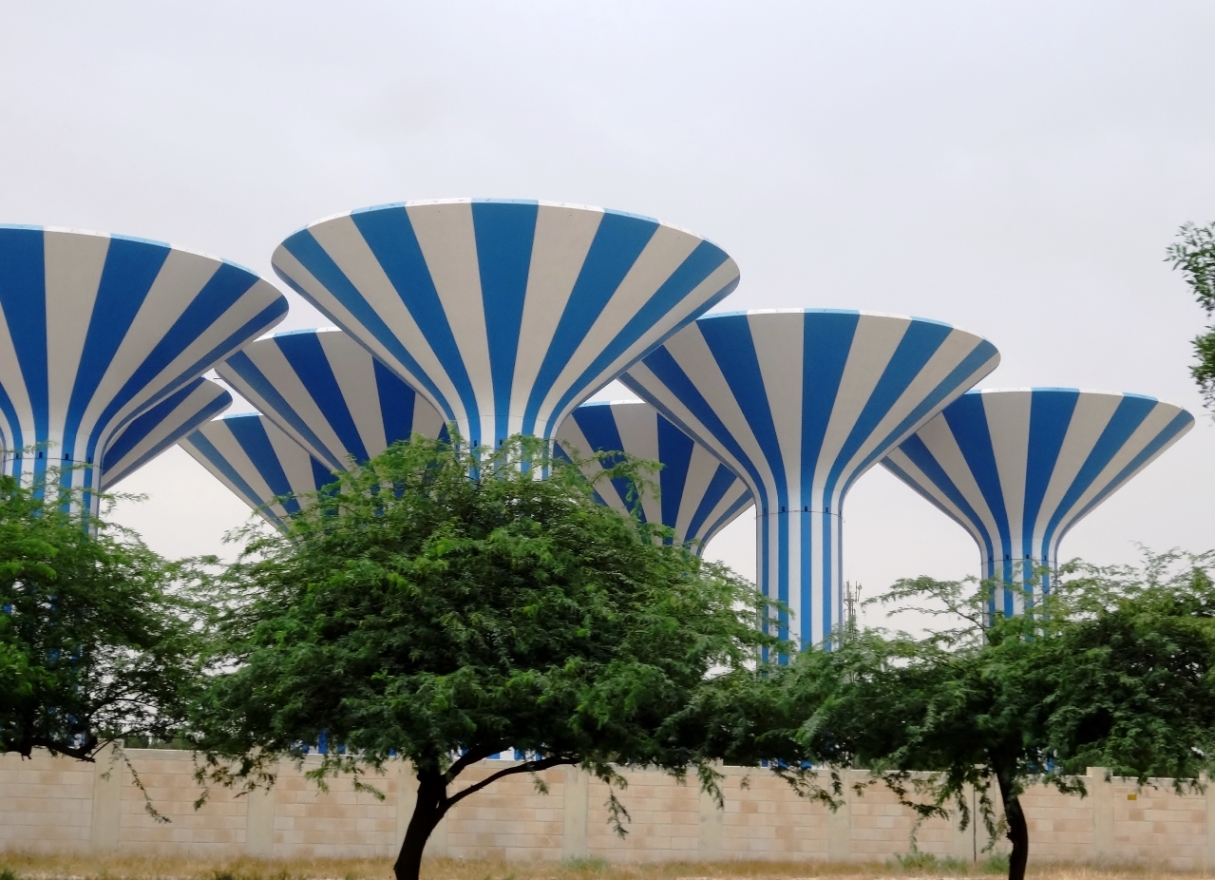 The very cool water towers. Each funnel is thirty metres high. I love them!