A Road Trip Around the Mediterranean Island Country 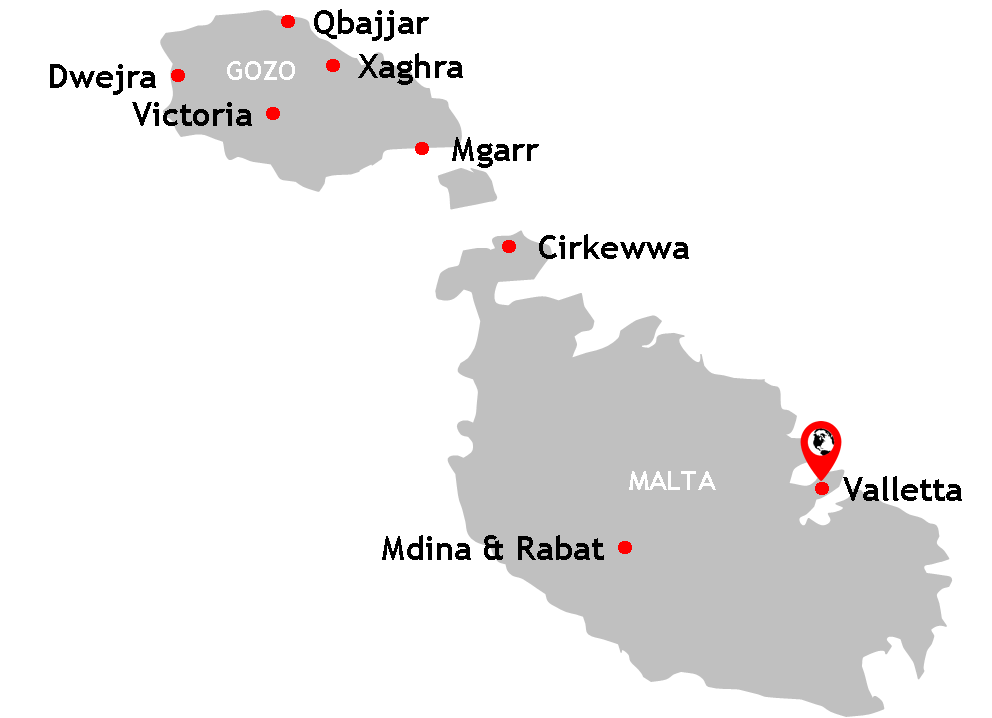 Malta was to be made up solely of a simple city break to the capital Valletta. However, the Lonely Planet Guide to Malta and Gozo soon dropped on the doormat and the list of things we should really see quickly grew. Why can we never go to a place and keep it simple? With time tight there was only one way forward. Enter, stage left, the hire car. There are times when you are unsure about a decision you've made and so when it bears more fruit than you could possibly have hoped for it is particularly satisfying... The words "Is there a doctor or nurse on board" and "As some of you may know we have a medical emergency on board and are diverting to Nantes in France where we'll be landing shortly" are not the words one expects, nor wants, to hear uttered on board a flight. Nevertheless this is what happened on our flight out of the United Kingdom. It was an inauspicious start to the trip. This flight delay meant that the decision to rent a car really came into its own. So, with two hours shaved off of an already short trip we headed into Malta with added gusto, picking up the hire car from the airport, re-setting the (also hired) sat-nav from Portuguese to English, and zooming off to our first destination with only an airport-purchased cake and coffee to fuel us. Hiring a car saved time by not having to wait for public transport, saved money by not having to pay for public transport and meant our itinerary could be entirely flexible. Malta is an archipelago, a chain of three islands called (in ascending size order) Comino, Gozo and Malta. It is the largest of these islands, Malta, whose name has gone forward as the Republic's overall name The Republic of Malta. The section below named "Malta", therefore, relates to the single island rather than the republic itself, just in case you were wondering. I have grouped all of the places we visited under single island headings because, as you can see from the map above, we covered a plethora of places on each island.

Malta is staunchly Roman Catholic. Plaques and religious statues adorn almost every home and building, often surrounded by flowers laid by worshippers. Even for an atheist I find these little tiles quite charming in simple aesthetic terms. This level of religious devotion outstrips Italy and possibly even India in some respects. Malta, the smallest state in the European Union, is an incongruous mix of countries, conquerings and colonial forces. It is quite possible to imagine you are in Italy, Greece, the Middle East or, in some quarters, England. Incongruous of all are the statues of Queen Victoria, the red telephone and red post boxes, the square plug sockets (don't bother bringing plug adaptors if you're travelling from Britain) and the iconic blue police lanterns above doorways - a cherished overhang, literally, from the days when Malta was a British Crown Colony. Malta became an independent country in 1964, and in 1979 finally ditched the Queen as its head of state for good. Such staggering of independence in two stages partially alludes to the fondness with which the Maltese regard the days of British colonial rule. Indeed, this goes some way to explaining the continued presence of British icons such as these. Peculiarly all of these icons are frozen in time, icons stopped at the point the British powers removed themselves from the archipelago. Expect, and marvel at, therefore, the retro Co-op supermarket signage for 99 tea bags, the impressively old sign for a HMV shop, the stores still named "haberdashery". These are retro British icons stopped dead in their tracks; seemingly abandoned and left behind by British force in full retreat. Such images of a British yesteryear rub shoulders with distinctly Maltese balconies and outwardly religious trappings. It would be rather easy for Britons to retire in Malta surrounded by poignant reminders of Britain's yesteryear. Ironically, many of these icons have failed to endure back home and thus Malta feels like a Britain frozen in time - a Britain which no longer exists. Malta is, therefore, an interesting place in which to dip your toe into a bygone Britain. It is a strange distillation of the English essence into a few stereotypical, and outmoded, symbols and brands. Lit in the heat of a Maltese summer they appear absurdly out of place.

Malta is the biggest of the three islands on the archipelago, and is also home to its Lilliputian capital city Valletta being, as it is, less than one kilometre squared in size. It is an elegant place with overhanging balconies in sheer abundance. Those on Republic Street are particularly impressive, being a veritable feast of styles and deep, subdued colours. The view of Valletta from the Bay of Sliema, where we based ourselves, is stunning. The huge sandy-coloured dome of the Carmelite Church and spires loom impressively on the skyline foregrounded by the lapping blue waters of the harbour, and was almost Venetian in quality.

We travelled to Valletta on a Saturday evening. Valletta was not exactly thronging. Expectations that Valletta's subdued sauntering would be replaced with a more capital city-like urban vibe later on in the evening were thwarted. Instead, a cold wind blew through the streets, al-fresco dining areas were virtually empty and a lonely busker gave up playing his trumpet. There was simply no audience. Of course, this experience is indicative of Valletta's gentility and its reserve. If you want a happening party scene head to St Julian's further down the coast. Valletta is a place of cordiality, manners, refinement and the, dare I say, "British stiff upper lip". Indeed, the only music you'll hear being pumped into the steep cobbled streets of Valletta is not techno or pop but, rather, monks singing in one of the many adjacent churches. Similarly, the gatherings we saw here were not youths on a night out but congregations of worshippers heading to church. A common sight is that of small statues of Roman Catholic figures built into the side of many a building, often with a crude light bulb or broken lantern below to illuminate it. Valletta's tranquillity is part of its allure meaning it often offers visitors a welcome retreat from Malta's many resorts. It is, not yet anyway, just another garish capital serving the sole interests of capital-ism. It should instead be viewed as a place geared towards serving Catholicism rather than capitalism.

Valletta's tranquillity resulted in us having the whole outdoor restaurant to ourselves - aside from a stray ginger cat who rather enjoyed the whole octopus we gave it having ordered a seafood pizza only to discover that there were two whole octopi included in the deal. The islands are unsurprisingly very aquatically-oriented and so if, like me, you are a bit squeamish about strange eight-legged sea monsters on your pizza, keep a close eye on what you're ordering. Just across the harbour lies Valletta's opposite: the promenade areas of St Julian's and Sliema both of which conjure up sights more readily associated with Miami not Malta. Muscular men prance up and down with unfathomably miniature dogs, joggers in the latest gear dash by with the latest tech in-tow, people pumping iron on the outdoor gym equipment and drinkers sit in noisy al-fresco bars sipping cocktails with neon lights all around.

Head approximately 12 kilometres westward from Valletta and the Miami-like promenades of St Julian's and Sliema and you will stumble across Malta's original and ancient walled capital Mdina. Rabat lies a stone throw outside Mdina's golden walls and sports the traditional trinity of narrow streets, religious statues and balconies. Rabat is Malta's essence distilled into a tiny space. The small square is dominated by a lightbulb-covered, and rather delightful, St Paul's Church. Stop off at the small cake shop opposite for a selection of traditional Maltese pastries and nougats before you leave. St Paul's Square is a perfectly pint-sized place in which to people watch and drink an awesome coffee.

Malta is an island with a multi-layered personality: staunchly religious and traditional, definitely quaint and charming, and certainly glitzy and pretentious - it just depends which aspect of Malta you wish to experience: there is a type of Malta to suit everyone - anything from tasteful to tasteless and everything else in-between. 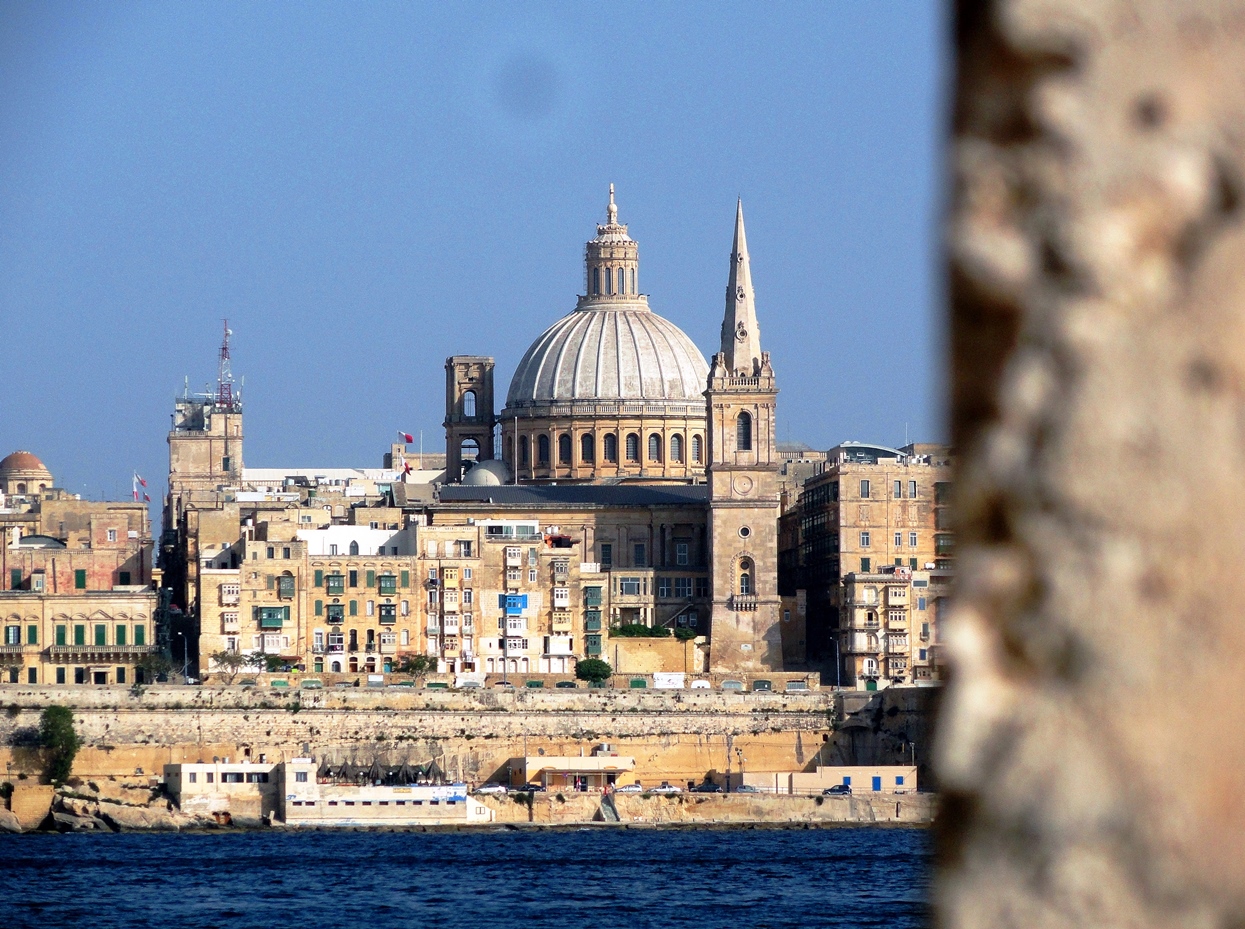 The beautiful view of Valletta as seen from across the harbour at Sliema. In the centre looms the huge sandy-coloured dome of the Carmelite Church. 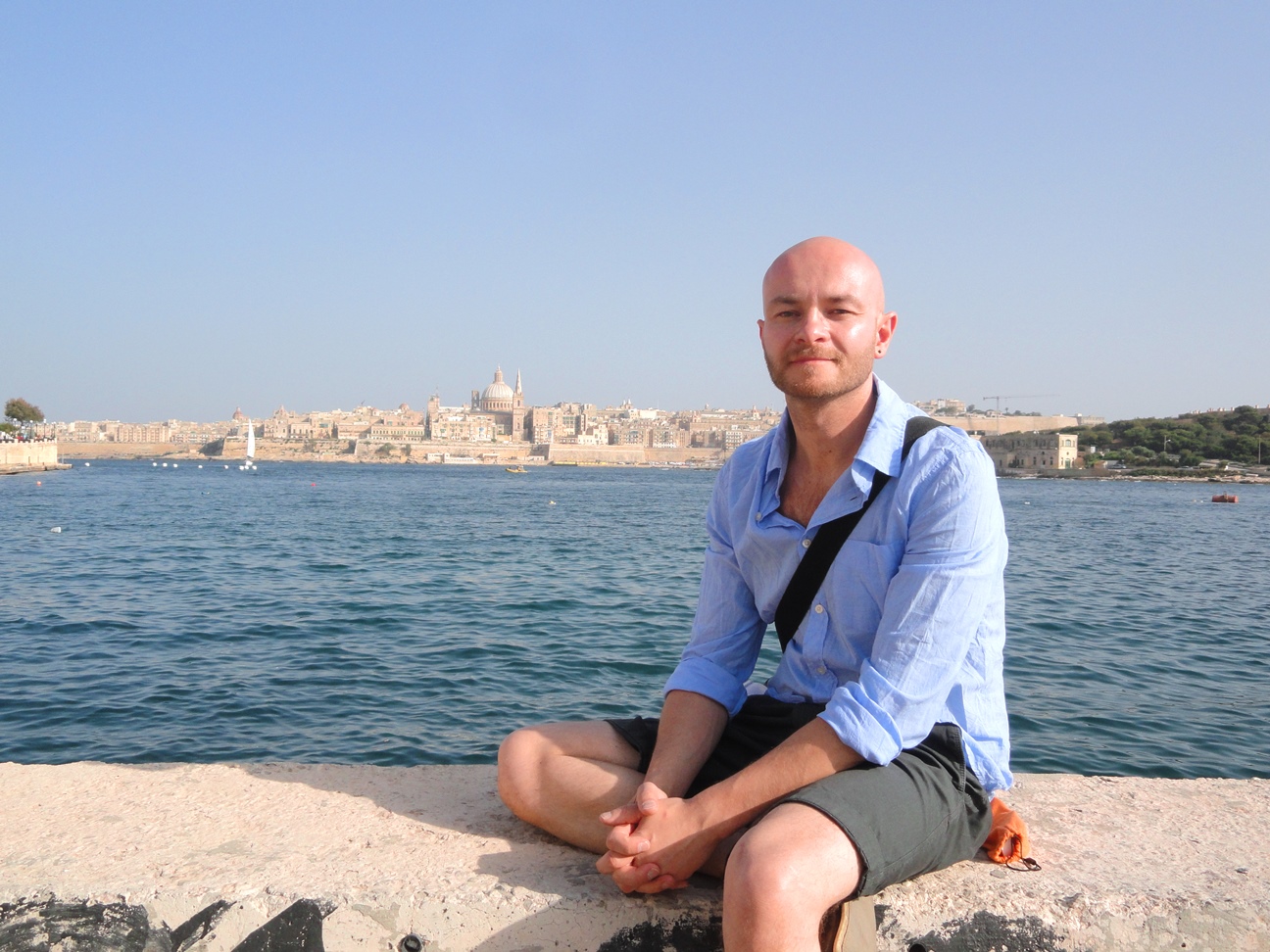 Overlooking Valletta: a more pretty city skyline you will not see in all the world. 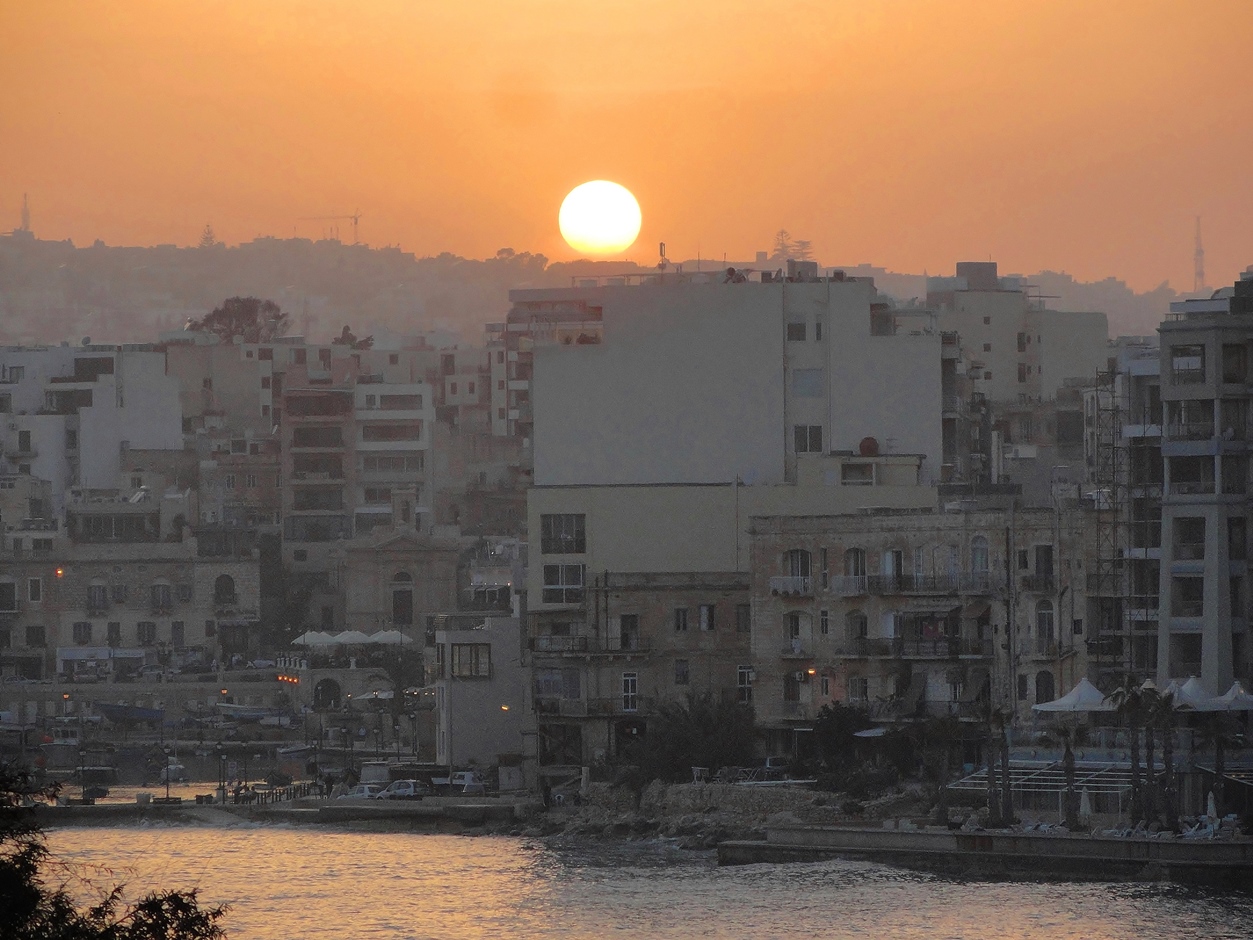 Sunset over the busy skyline of Sliema.

Gozo is Malta's second biggest island connected by a reliable ferry system which will get you from Malta's northern port at Cirkewwa to Gozo's Mgarr port on the south-eastern tip of the island. We drove onto the ferry and off again in around 25 minutes paying a fare of €20 on the return leg. It was a painless experience with a short stint on the upper deck to take in the views of Malta's smallest island Comino with its bright Blue Lagoon. Virtually uninhabited, Comino was a dumping ground for plague victims in the nineteenth century. Lucky for us, then, that we were not stopping here.

The first thing which strikes you is that Gozo moves at a much slower pace than Malta. Its land is lush and green with crops, giant cacti and brightly-coloured flowers. Gozo is local and rural; a sleepy idyll and the ideal place to escape to. Expect country lanes, steep hills and some stunning geographical sights. What Gozo lacks in size it more than makes up for in tranquillity, beauty and natural wonders. Our first destination was Dwejra Point on the western edge of the island, home to the huge and very photogenic Azure Window. The large sandstone arch frames the azure blues of the ocean and the cliffs behind like a window. Like me, you might be lucky enough to come across crabs in some of the rock pools thrown in as part of the experience.

Also of photogenic import on Gozo are the Salt Pans on the northern tip of the island. Viewed from high up these pans are a stone patchwork quilt designed to collect Mediterranean salts when the tide comes in. If you're in a car it's well worth the journey to get here. However, the highlight of this leg of the journey to Xwieni Bay, and possibly the highlight of Gozo itself, has to be spotting hundreds of jellyfish all coming into the shallow waters of the bay. Their purple heads and translucent tentacles bobbing along in tune with the tide like a slow-motion dance. Minutes before seeing these I was thinking how nice it would be to go for a quick paddle. Note of caution: don't paddle in the warm waters of the Mediterranean without having a good look around first - that, or go in with steel-capped leather boots. This was the first time I'd seen jellyfish and was probably more excited than a man in his thirties should have been. Driving along what seemed like all four points of the Gozitan compass, we also spent time in Gozo's largest town Victoria (also known as Rabat) for lunch, as well asthe Ggantija Temple at Xaghra (Malta's oldest temple) with its stunning views over southern Gozo. 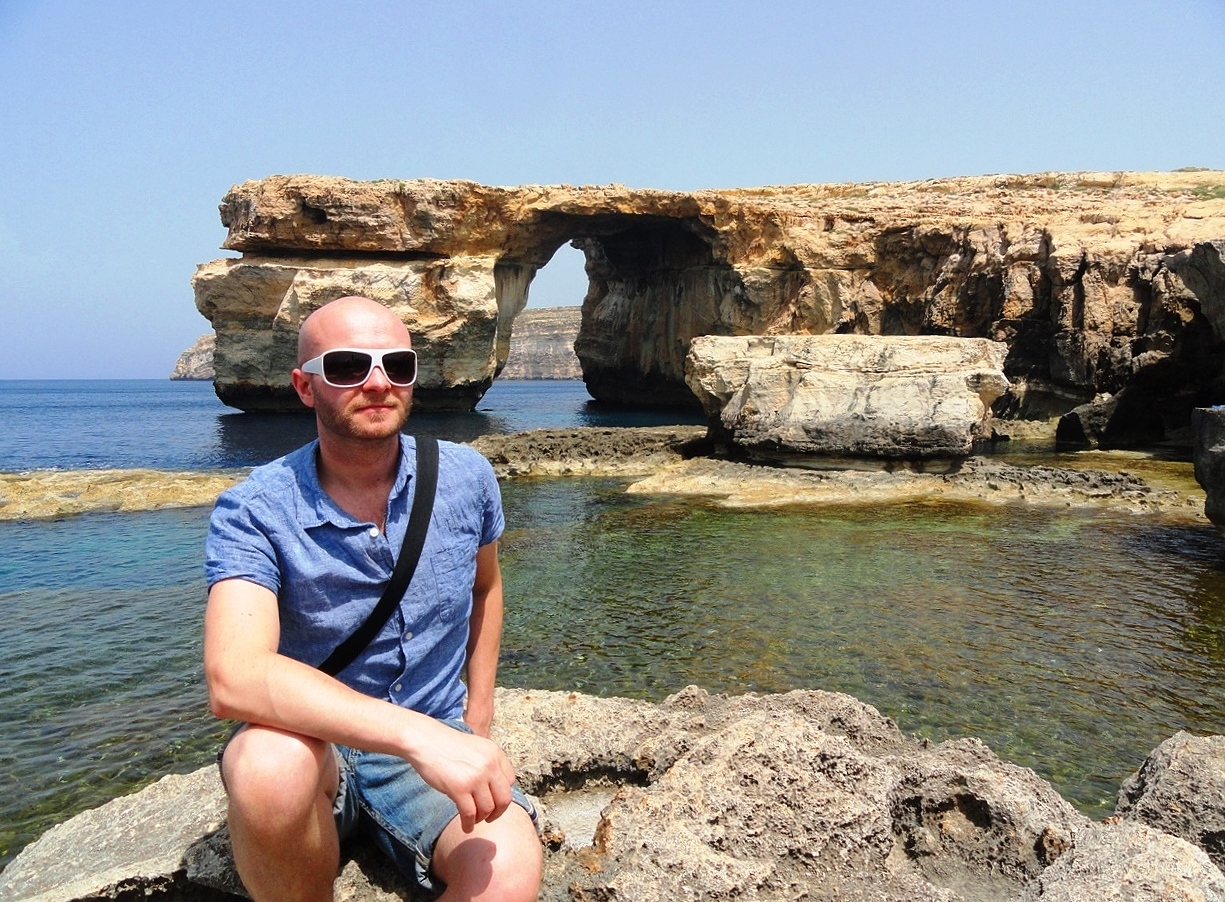 The stunning Azure Window whose large sandstone arch frames the azure blues of the ocean and cliffs. In March 2017 the arch finally collapsed. I saw it just in time. 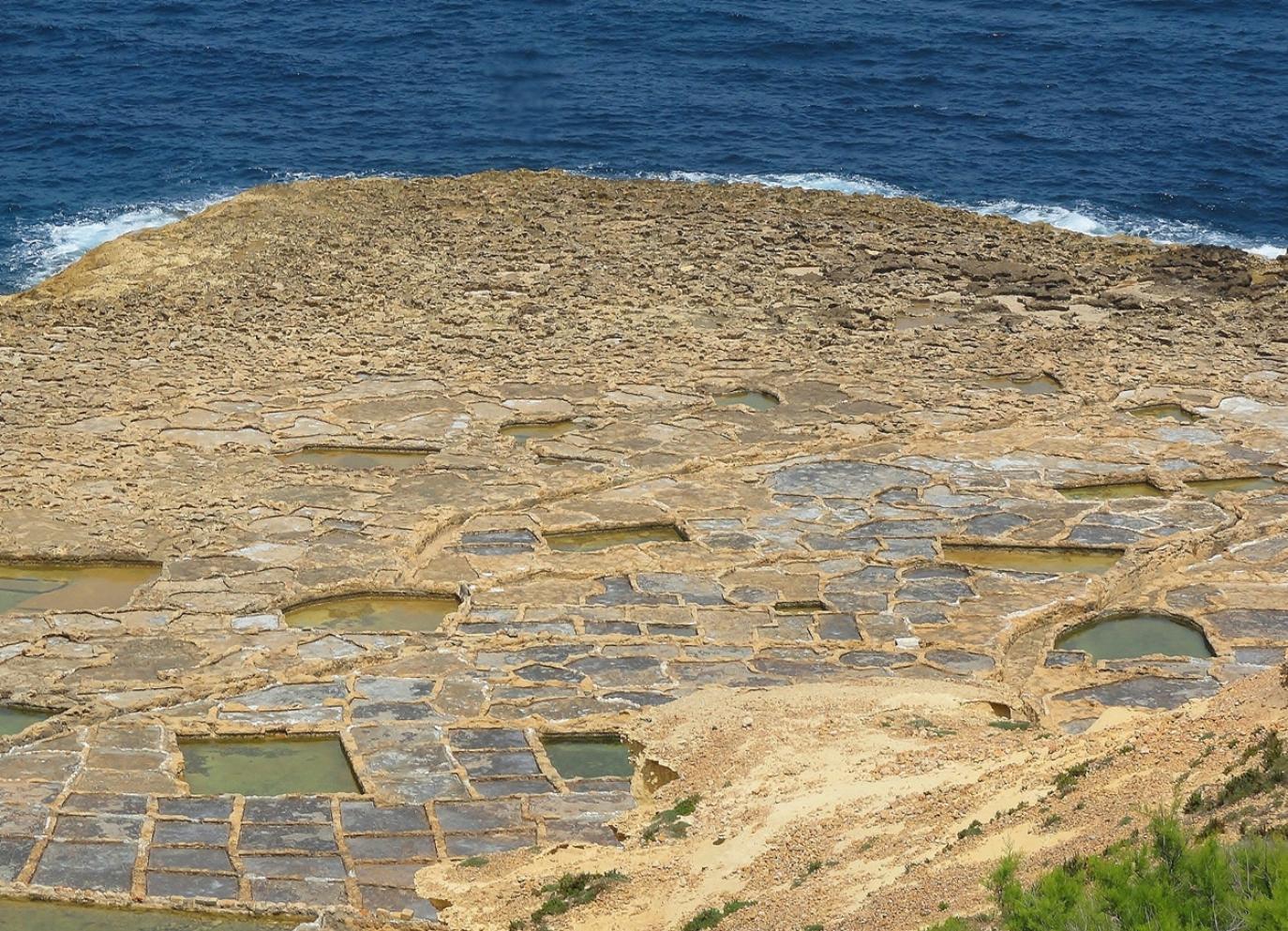 The Salt Pans make a curious and photogenic patchwork quilt of stone and salt along the coastline of Qbajjar Bay. 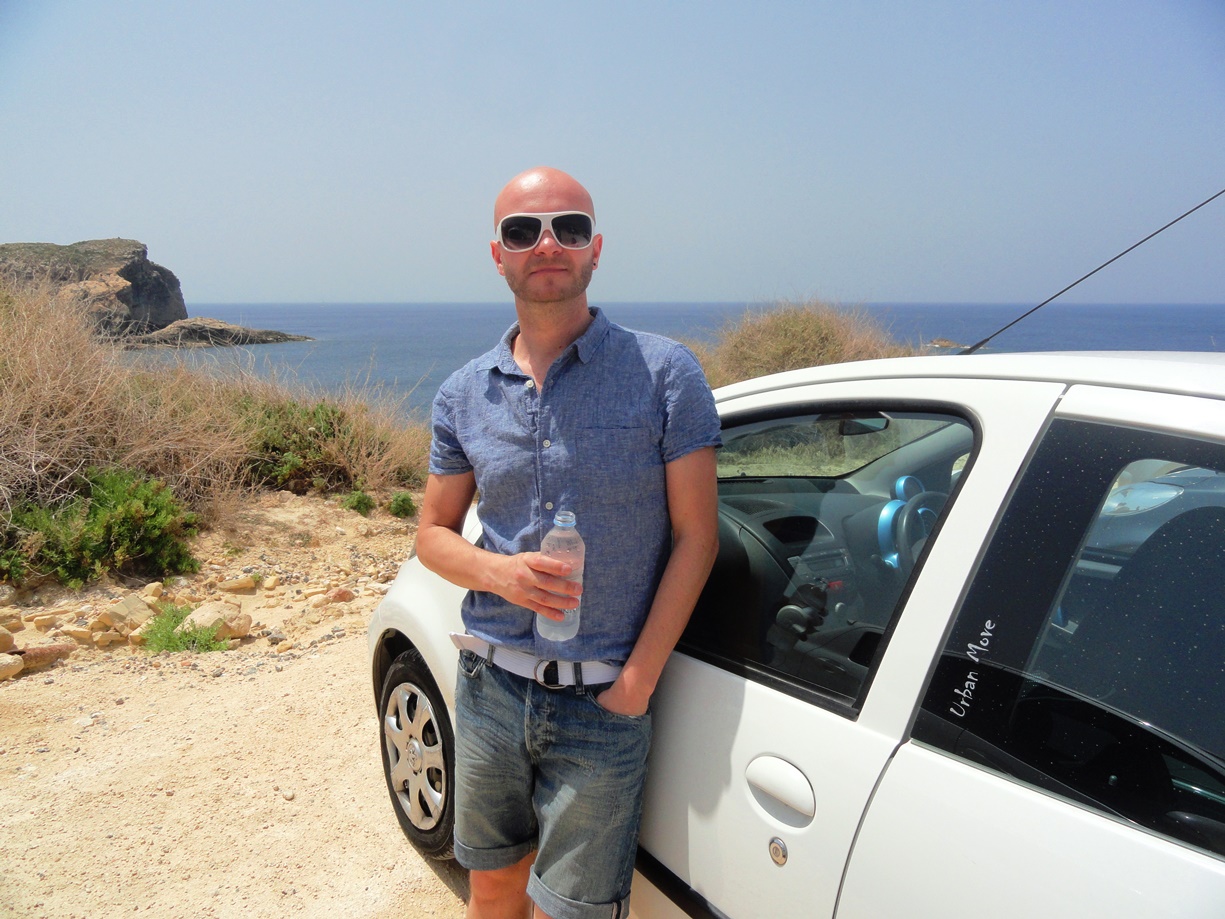 The only way to truly explore Malta: on an awesome road trip.