A Summer Road Trip Through the Heart of Scotland

Where: Edinburgh, Inverness, Fort Augustus, Glen Coe, Laggan, Spean Bridge. Scotland, United Kingdom. Europe.
When: August 2009.
What: Loch Ness, The Scottish Parliament, Forth Rail and Road Bridges, Ben Nevis Cable Car Ride, Laggan Dam, Urquart Castle, Edinburgh Fringe Festival, Princes Street, Edinburgh Castle, Little Athens, Scottish Thistle, Skinny-dipping in Loch Ness, Rare Breeds and Children's Farm, Hairy Coo.
How: Driving, Gondola ride.
Country counter: +1 country.
Illnesses or mishaps: The exhaust falling off of our car as we drive through Loch Ness. We had to reverse to collect the pipe from the road! This resulted in an emergency call to a local mechanic out in Fort Augustus who soldered it back on for £10 - we were back on our way within two hours. 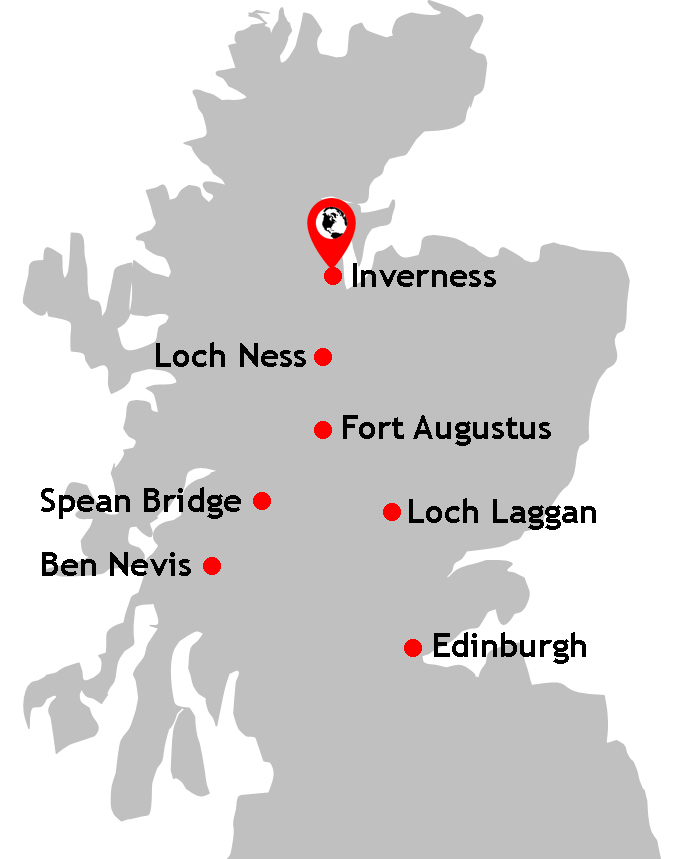 Scotland is one of the four nations making up the United Kingdom, along with England, Wales and Northern Ireland, and is a country in its own right. It is culturally distinct from other parts of the Kingdom coming with its own devolved powers in parliament, its own rich heritage and its own language Scots Gaelic. This is a mystical and enchanting country characterised by lochs inhabited by mythical monsters, some of the best natural scenery in the British Isles, the visceral whining of bagpipes, ubiquitous tartan fabrics and the curious sight of men in skirts. This was my third visit to the land north of the border, and my second tour of the country having journeyed across the Highlands and Islands of Scotland five years previously on a trip with a neat little tour company called Macbackpackers. Endeavouring to keep things inexpensive and simple in the Summer of 2009 saw us embark on a road trip zig-zagging from north to south. Inverness was the most northerly point from which we were to descend down the spine of Scotland, finishing in Edinburgh.

Inverness is a quiet city, even though we arrived on a Saturday night when locals were heading into town for their night out. Outside the restaurants and bars, the city was peaceful. We walked along the River Ness and the imaginatively-named "Ness Walk". Inverness is a beautiful city full of Scottish character; large grey stone buildings with grand conical turrets give the city import and regency. Inverness is Gaelic for "Mouth of the River Ness", a perfect starting point to tick off one of Scotland's most famous tourist sights and home to a legendary monster: Loch Ness. Whilst looking for the famed monster is quite clearly a silly and pointless exercise, it is really quite extraordinary how many people visit here from other countries. Just like us, the closest you will ever get to the mythical creature itself will be two giant plastic figures, one predictably residing outside the Loch Ness Monster Exhibition and gift shop, the other partially submerged, more creatively, in a nearby man-made pool. However, the views of Loch Ness on a brooding Scottish day go a long way to making up for such tasteless tourist kitsch.

I got to experience more of Loch Ness than I had initially anticipated when, enroute to Fort Augustus from Loch Ness, the car exhaust unceremoniously detached itself from our car. Indeed, we had to reverse the car some one hundred metres or so to collect the thing. Awaiting the arrival of a mechanic who, ultimately would end up towing our car all the way to Fort Augustus, I took the opportunity to skinny dip in this most famous of Scottish lochs. Luckily, our mechanic was able to patch up the exhaust on arrival in Fort Augustus. Fort Augustus is at the end of the Loch Ness region, a small village which relies heavily on tourists. It was never a place we'd intended to visit on our itinerary but it was a place we had an hour or so to explore whilst the car exhaust was being re-attached to our rapidly fading Renault Clio. The village is a laid-back place to spend time with its quaint village shops and tiered lock. It was also home to the Rare Breeds and Children's Farm which we visited to see, and stroke, the iconic Scottish "hairy coo".

One of the principal benefits of a driving holiday means you can stop off at anywhere which takes your fancy. Glen Coe, Spean Bridge and Laggan Dam were three such places. Spean Bridge was the location we decided to base ourselves for a night - a weird place to stay because the two star hotel had strong military links and so I felt like I was a private staying in a soldiers' mess. Onto Ben Nevis, and the highest mountain in the British Isles at 1345 metres above sea level. By this point I had already climbed Mount Snowdon in Wales' Snowdonia National Park at 1085 metres high but I was a little unprepared for such physical exertion and so opted for the cable car ride instead which transported us part-way up the mountain. Luckily the weather was fine, allowing me to appreciate the wonderful views at around 650 metres from Aonach Mor, a mountain a couple of kilometres away from Ben Nevis itself.

Edinburgh was the final destination and as fitting a place in which to finish our road trip through the heart of Alba as any. We stumbled upon Edinburgh at the time of its famous Fringe Festival. We knew that the Fringe was running because it was August. It was thrilling to be in Edinburgh at the same time of this world-famous festival. The city was throbbing with people and performances: flyers thrust into your hand, desperate artists keen to fill seats drop their prices shout like market stall sellers, and outdoor performers bring shopping streets to a standstill.

An Alba symbol: I couldn't go on a road trip around Scotland with taking a photograph of Scotland's floral emblem, the Thistle.

A lonely tree branch points out into Loch Ness and in doing so helps capture a sense of the loch's atmospheric solitude. 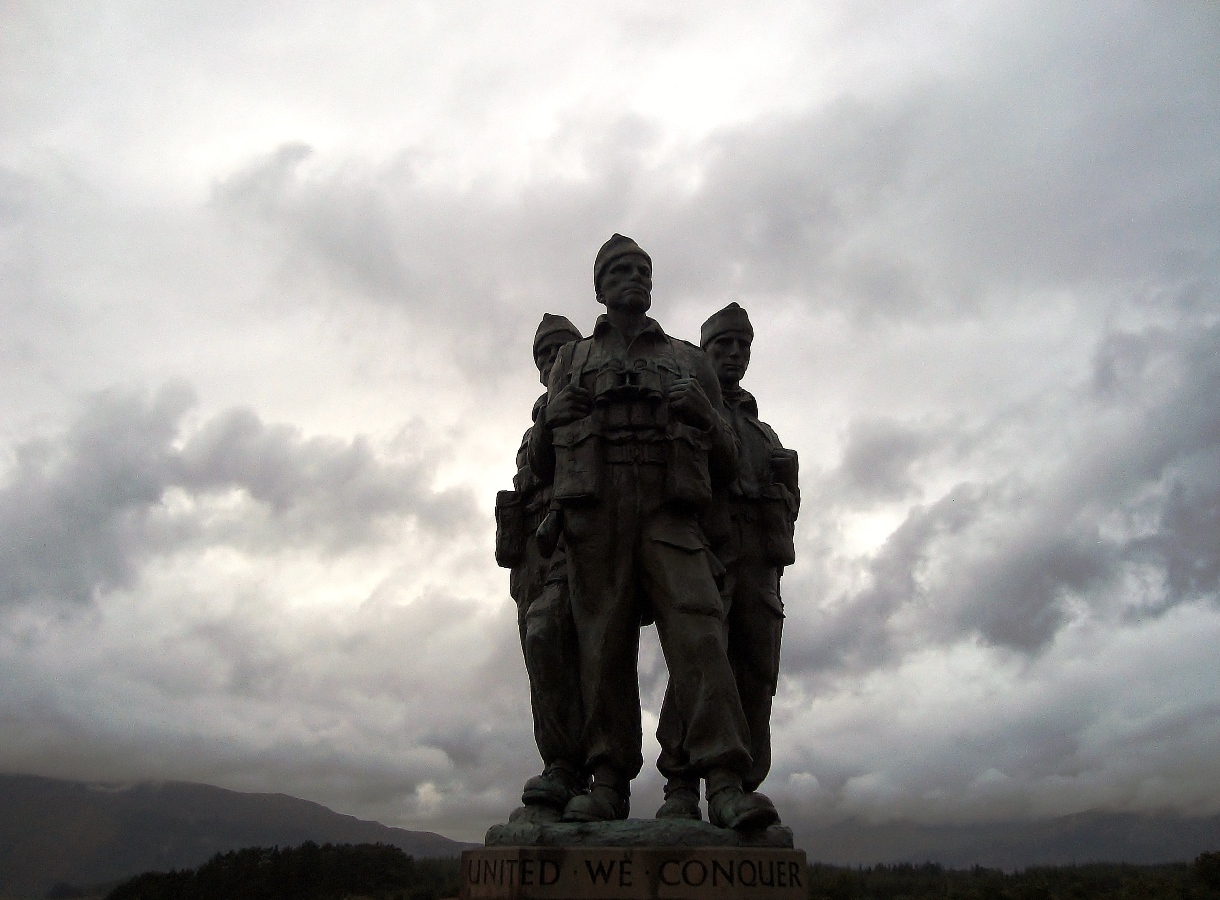 The Glencoe Massacre Monument set against a moody Scottish sky. 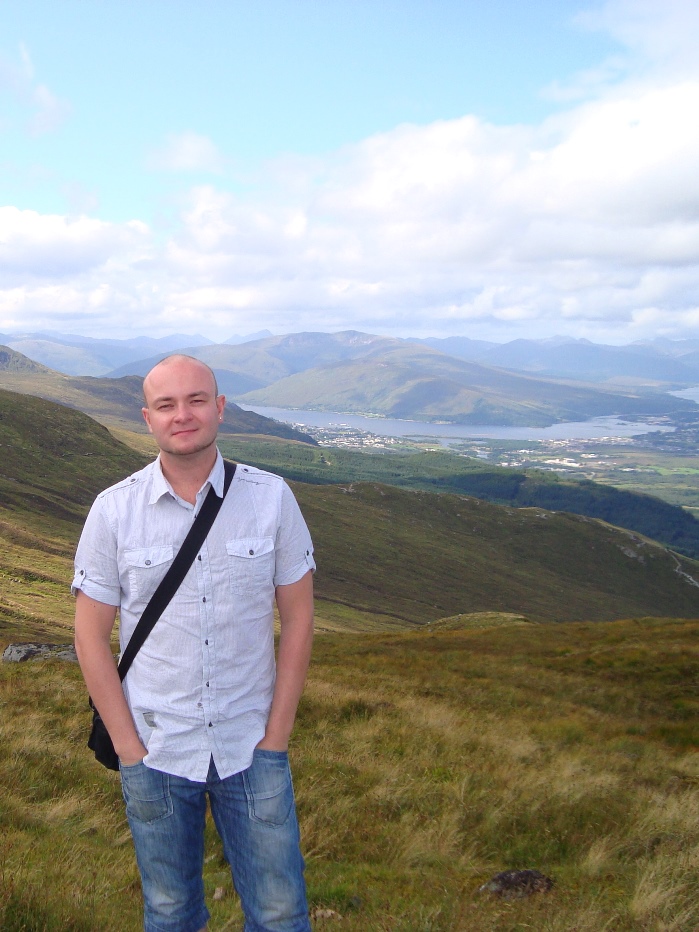 The Ben Nevis cable car. Right, taking in the view on top of Ben Nevis. Rather amazing on a good weather day. 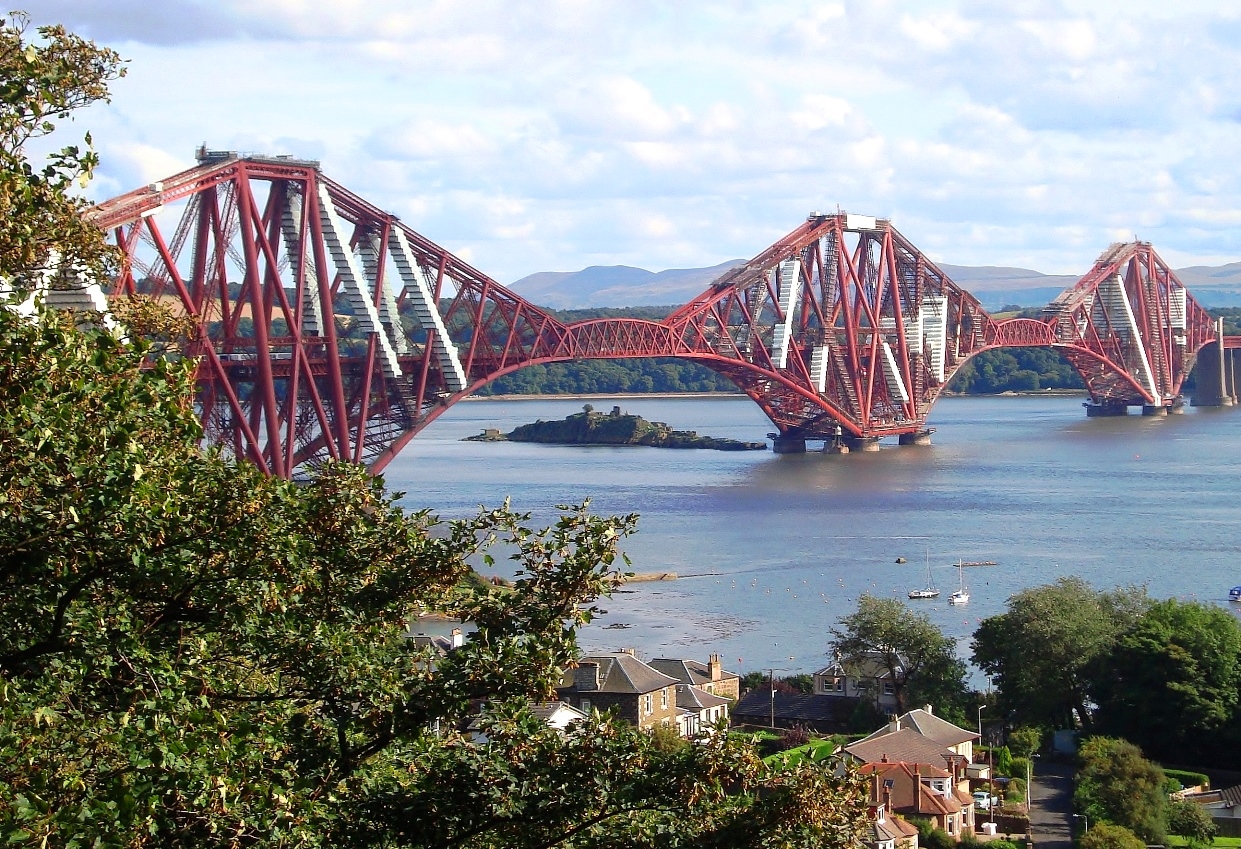 The dramatic Forth Rail Bridge crossing the Firth of Forth. 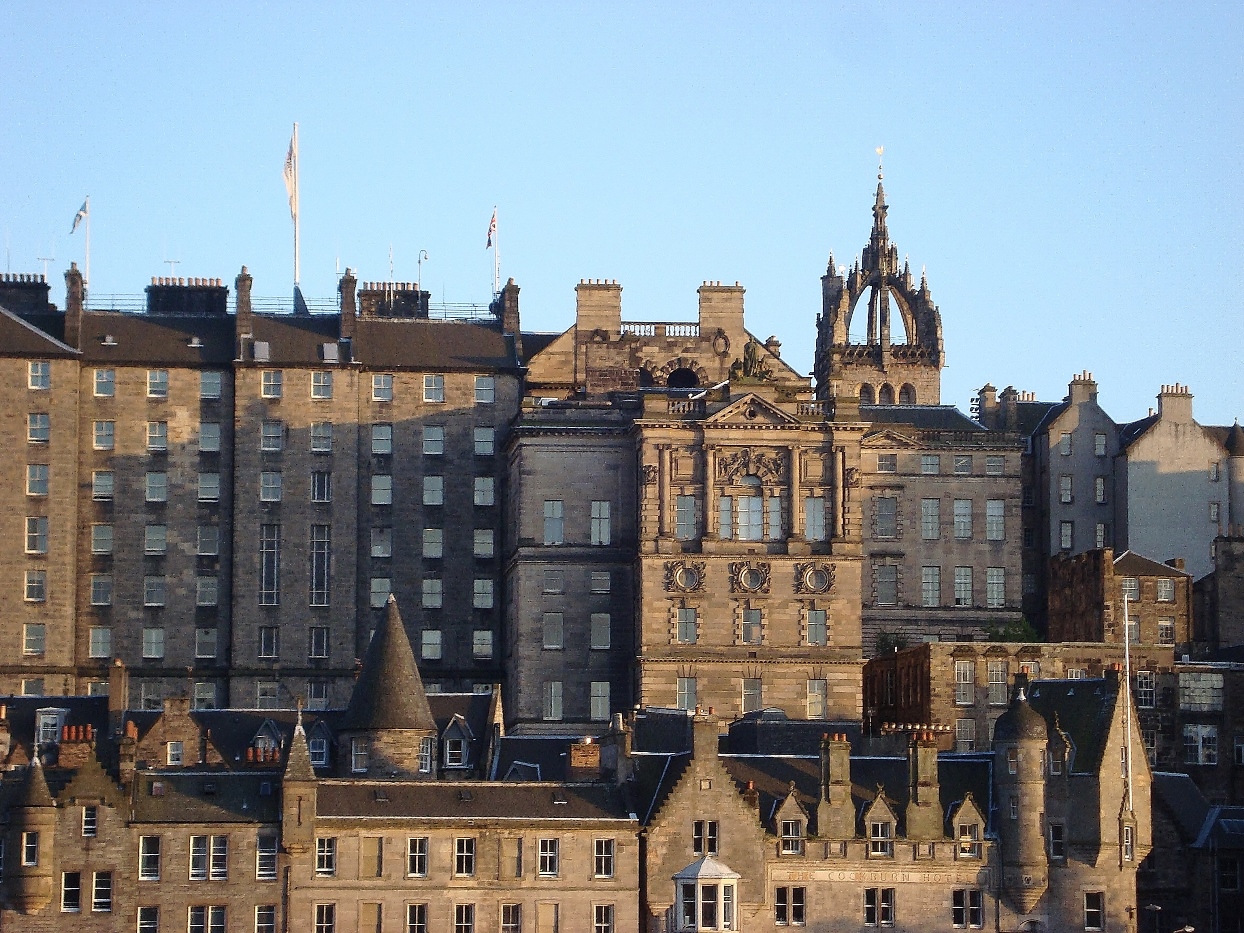 The stone skyline of Edinburgh full of embellishment, turrets and grandiosity. This is one of my favourite photographs from the trip - I love the way the sunset highlights the buildings' architectural details. 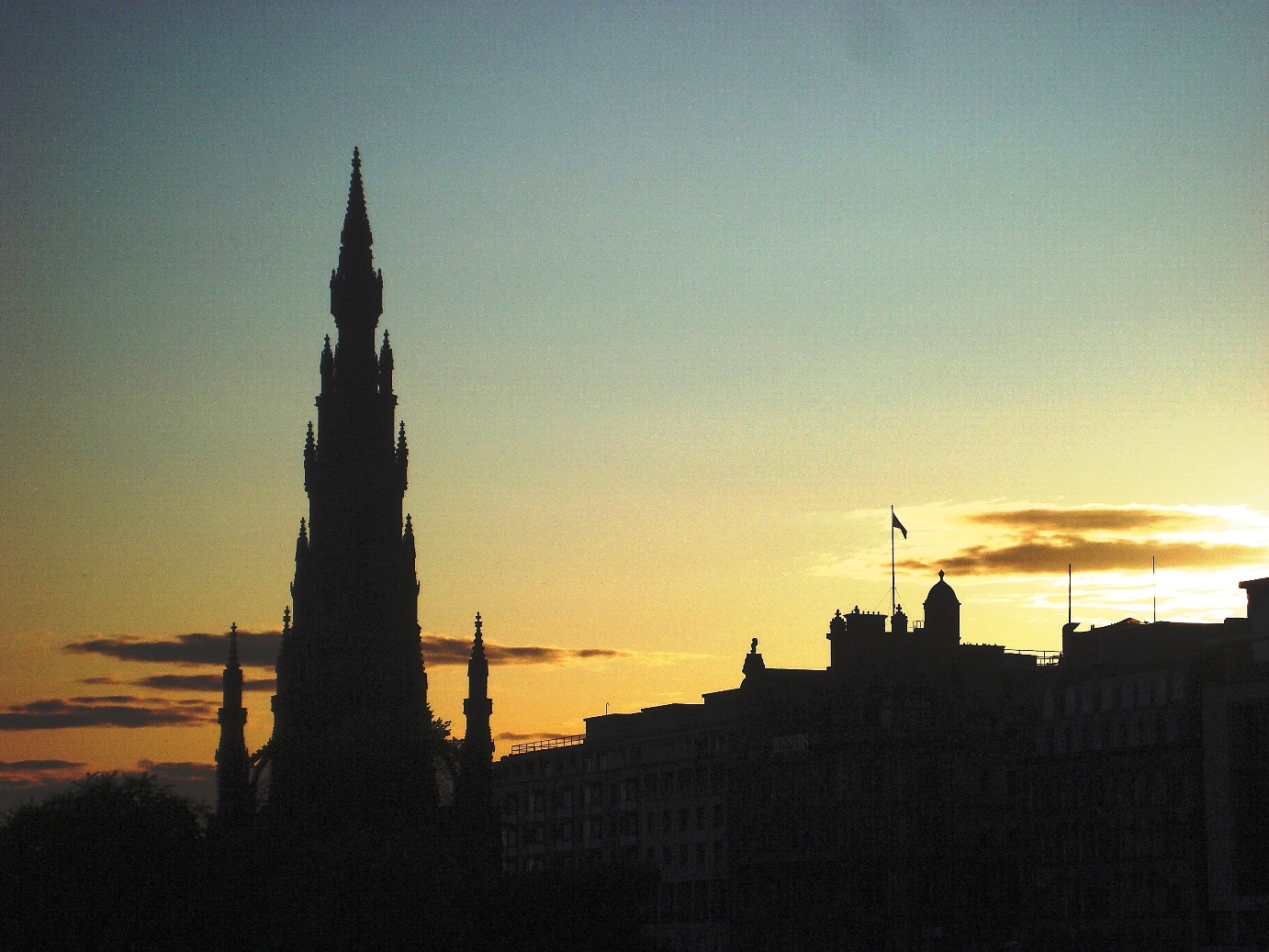 A silhouetted Scot Monument cuts a striking shape against the Edinburgh sunset. 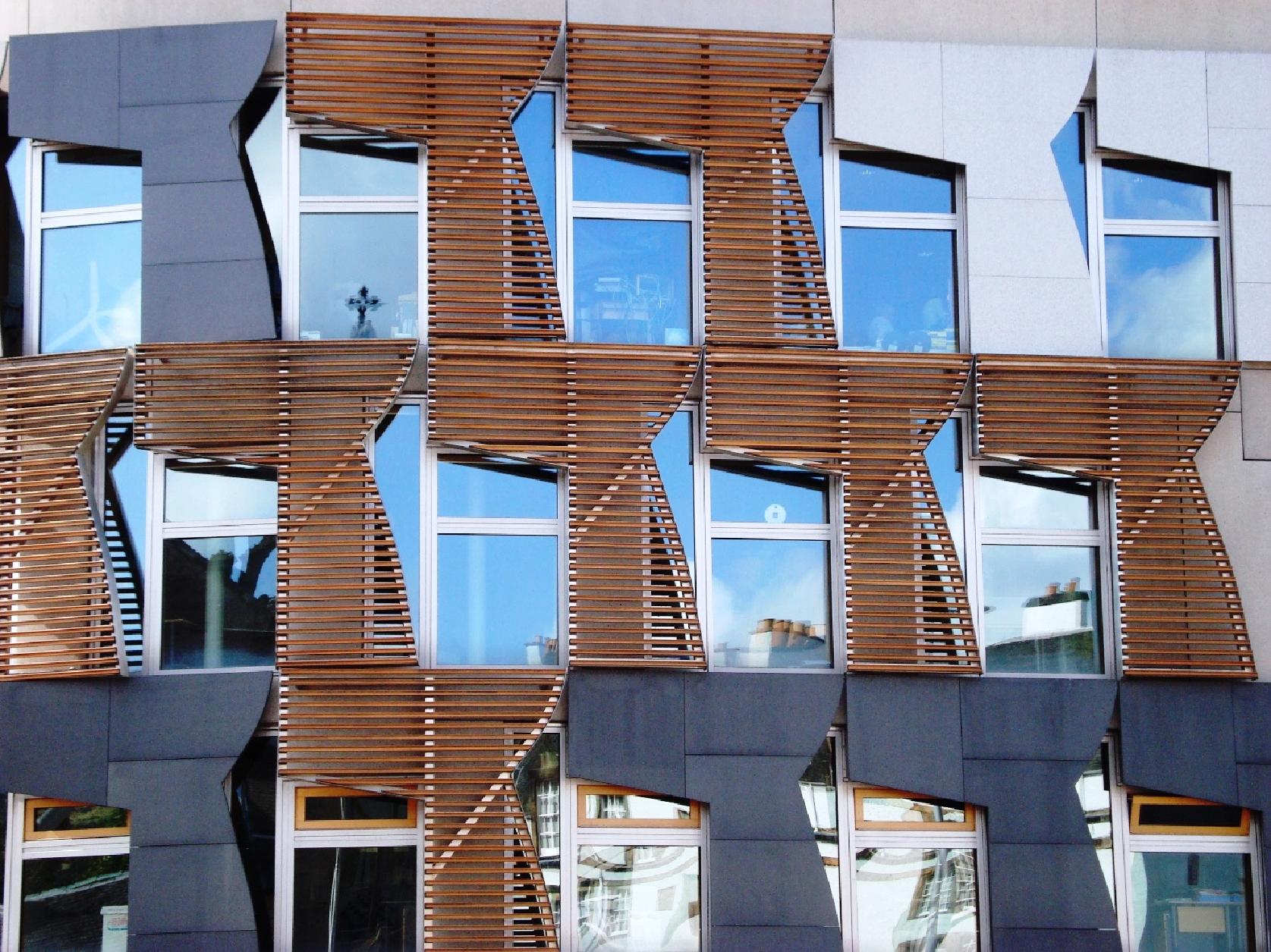 The innovative fascia of the Holyrood Scottish Parliament.