A Mini Swiss Adventure to Zurich and Schaffhausen 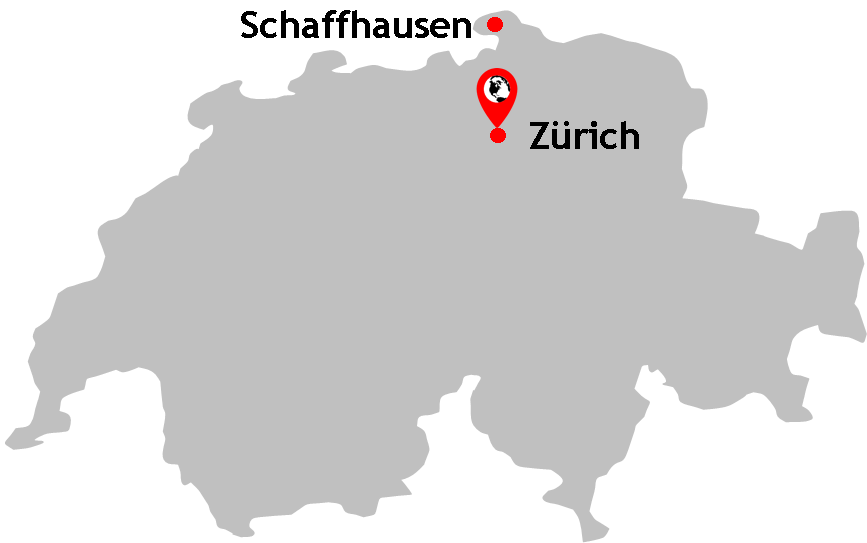 Switzerland was one country we couldn't manage to fit in to our Inter-rail adventure of twelve countries back in 2007. Reasonably-priced flights allowed me to right this wrong - albeit by travelling to two sleepier places in Switzerland: the financial capital of Zürich and the waterfall-wonderful Schaffhausen. This was a leisurely European city break during the autumn months; a time of evocative orange leaves and a festive nip in the air - perfect for a city saunter and cosy coffee times in carefully-chosen cafés. This was not to be my only visit to Switzerland. I was to return several years later on my solo trip from Basel to the eastern Swiss border at Sargans to experience the Lilliputian country of Liechtenstein.

Zurich is Switzerland's financial centre and, as I was to discover, a financial centre does not the most interesting of destinations make. The Swiss are renowned for their clocks and thus it is no surprise that Zürich is a city with an impressive array of clocks and clock towers. Indeed, there is even one made of flowers. Using the city's trams we navigated Zürich's principal sights, including the largest clock face in Europe on the tower of Saint Peters Church and the twin towers of the gigantic bulk of the Grossmünster Cathedral - the undisputed landmark of the city. The Grossmünster's chiming on the hour, every hour dominates the soundscape of the city. Aside form this auditory intrusion, it was noticeable just how quiet this city was; every day had the feel of a laid-back Sunday; no crowds, no thronging cafés or restaurants, no urban hustle and bustle. Even at rush-hour the city felt sedate. Where was everybody? The city's River Limmat is scenic enough, running like an artery through Zurich and out in to the Zürichsee. Zürich wouldn’t be a proper Swiss city without its lake. Buildings along the riverside, when illuminated at night, reflect pleasingly on the surfaces of the river, which sometimes takes on a Venice-like quality with its little mooring posts and dinky boats bobbing away gently.

Having explored Zürich and, with a little time left on our itinerary, we decided to look further afield for a little excitement. Our Rough Guide to Switzerland led us to Schaffhausen, a typically Swiss town a mere 40 kilometres outside of Zürich and easily accessible by train. Getting the train to take us this insignificant distance meant that, technically anyway, we had travelled from central to northern Switzerland. This sounds far more interesting that it actually was. Still, I remember feeling  rather intrepid at the time. We took the trouble to visit here for the same reason everybody else does: Schaffhausen is home to Europe's largest waterfall at a modest 23 metres high and 150 metres wide. We walked the couple of kilometres from the town's historic centre down to the waterfall. Many people come to Schaffhausen for the Rhine Falls and leave soon after. However, the town's historic centre is well worth you delaying your return train journey to Zürich for a couple of hours. The town's Fronwagplatz has some pretty wonderful fountains with adorning characters and buildings whose facades are decorated with murals such as the intriguing spectacle of the Ritter Knight House. Clock towers, remnants of medieval stone walls and delightful local eateries make Schaffhausen pretty and perfectly formed. Arguably Fronwagplatz is the very essence of Switzerland distilled into a single town square. 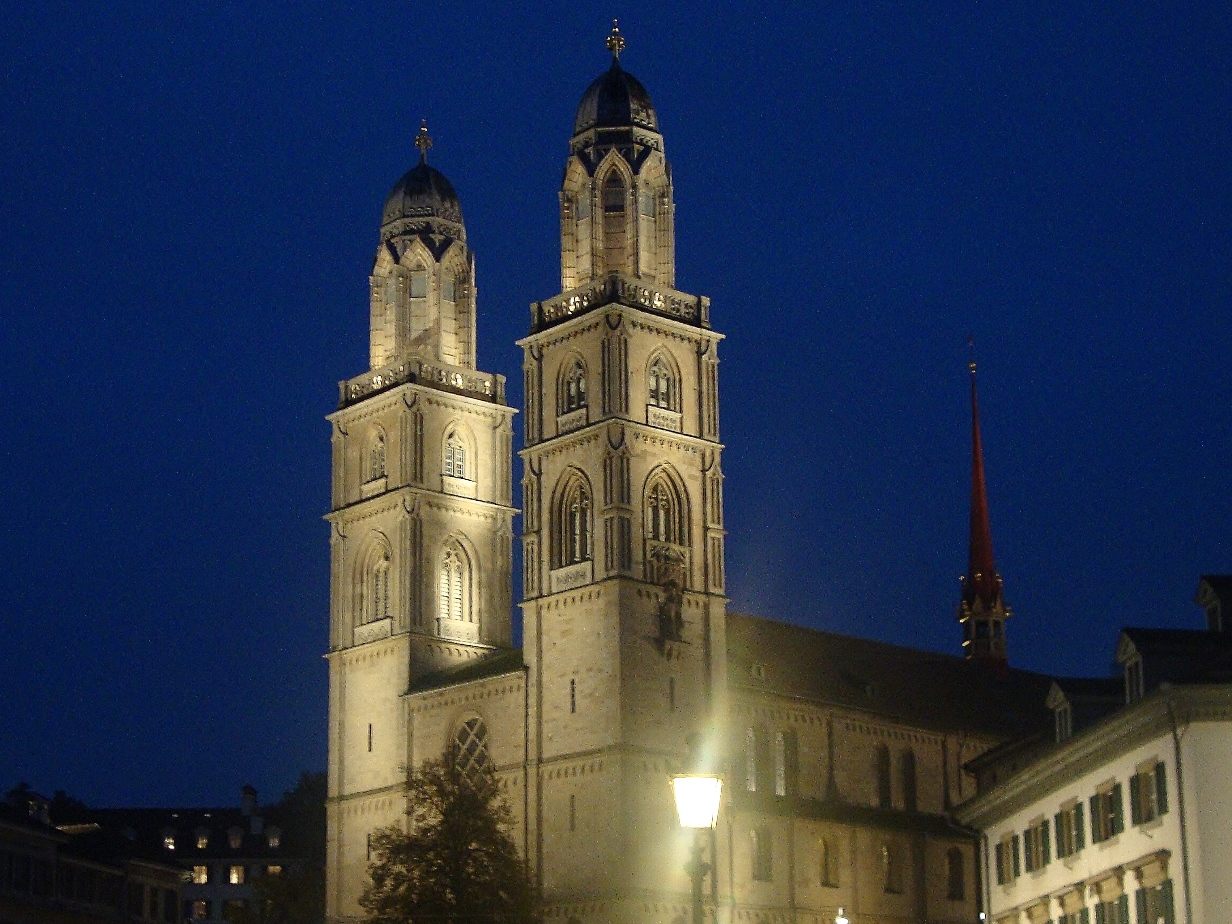 The impressively-sized Grossmünster Cathedral by night and undisputed landmark of Zürich. 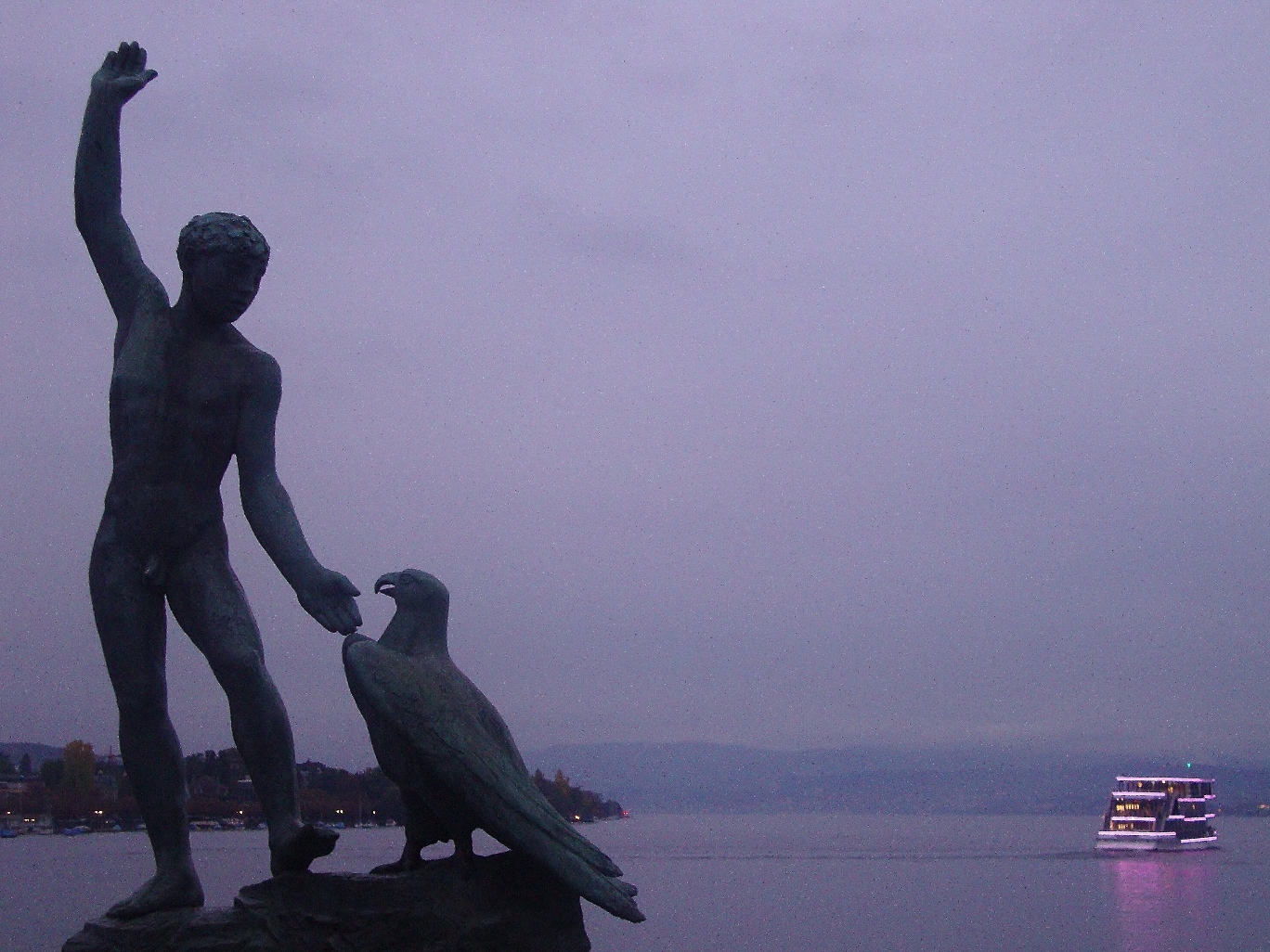 The Ganymede statue is silhouetted against the Zürichsee at dusk as an illuminated ferry heads out into the lake. 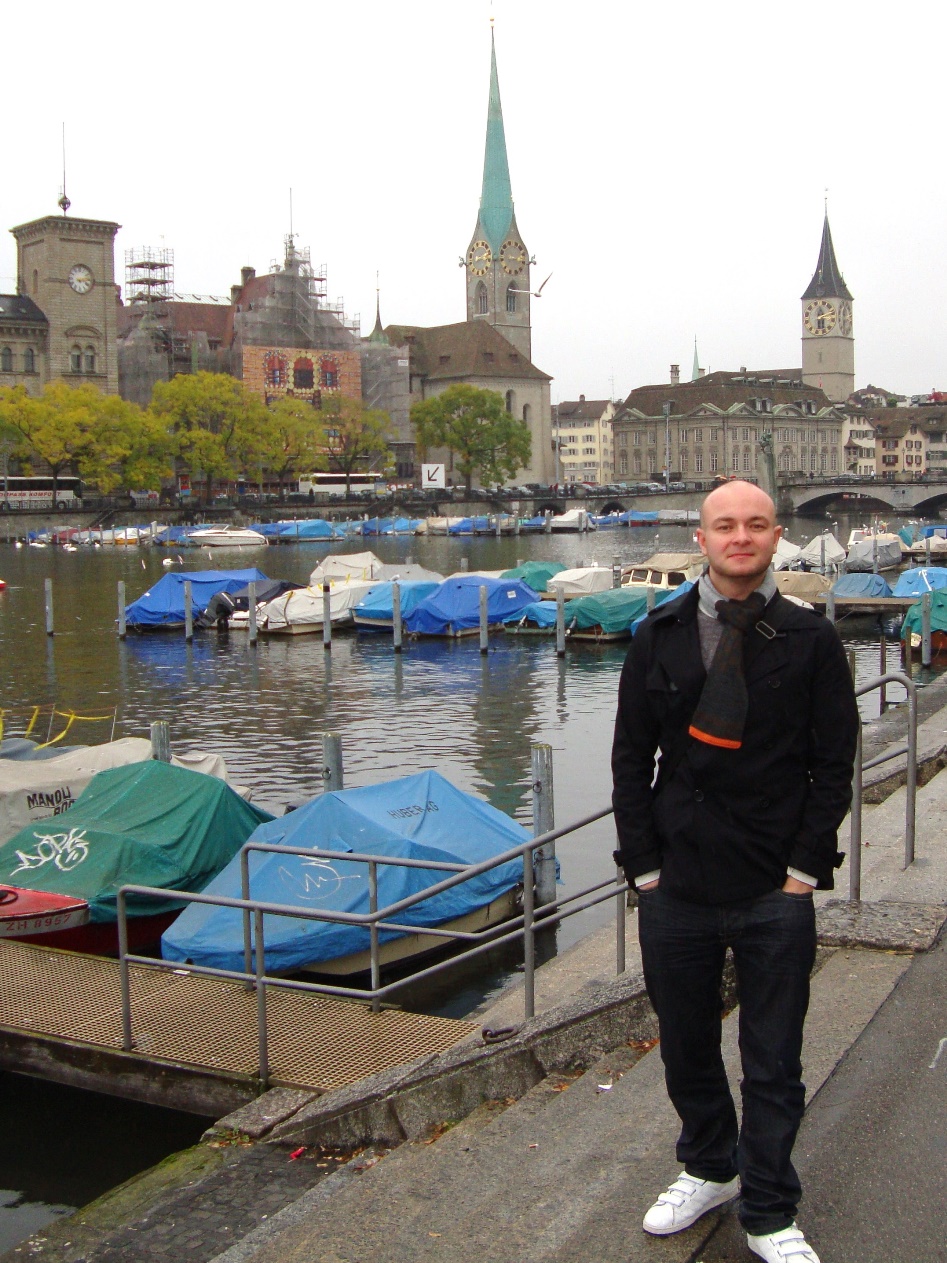 Small boats moored along the banks of the River Limmat. 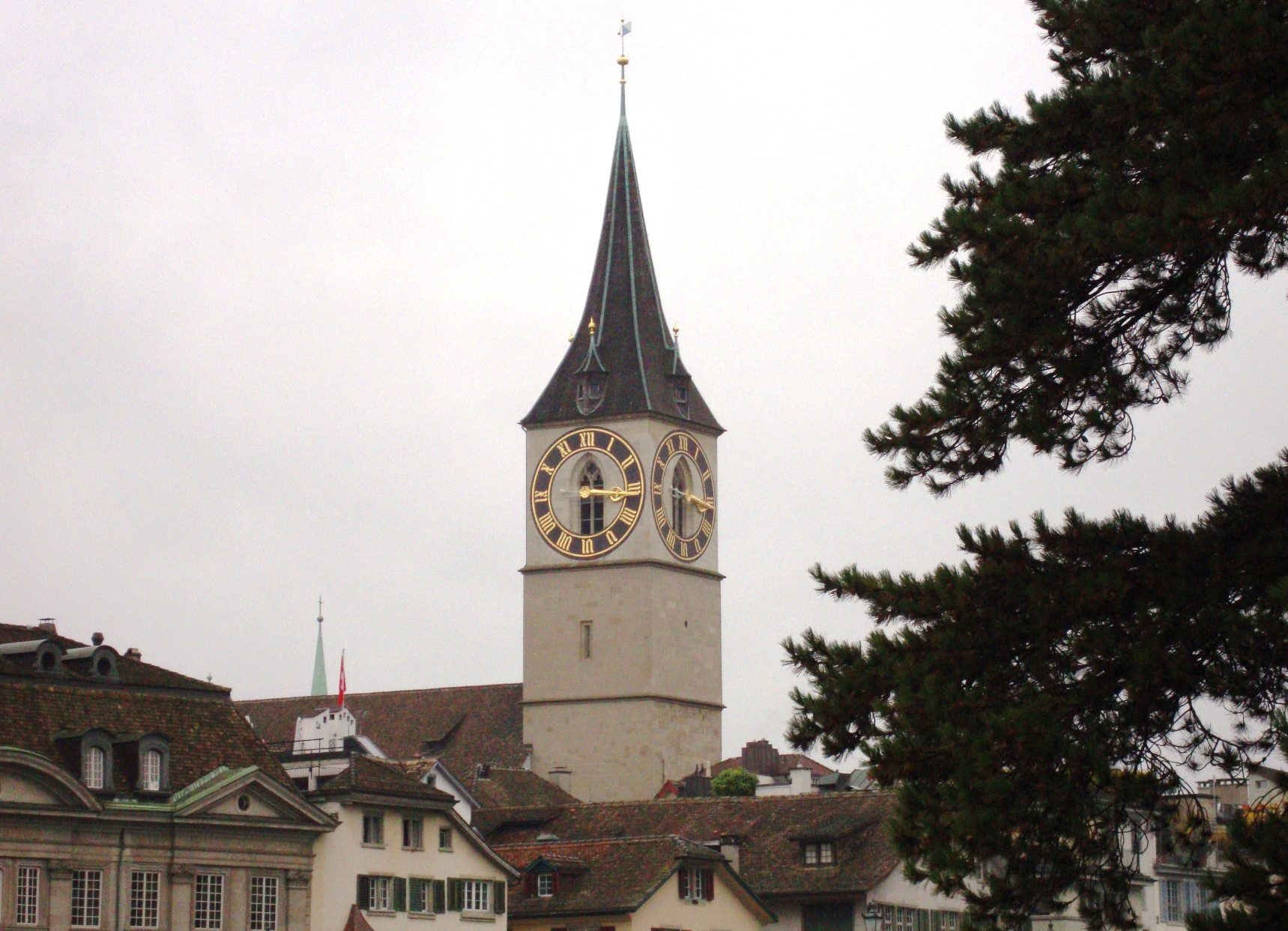 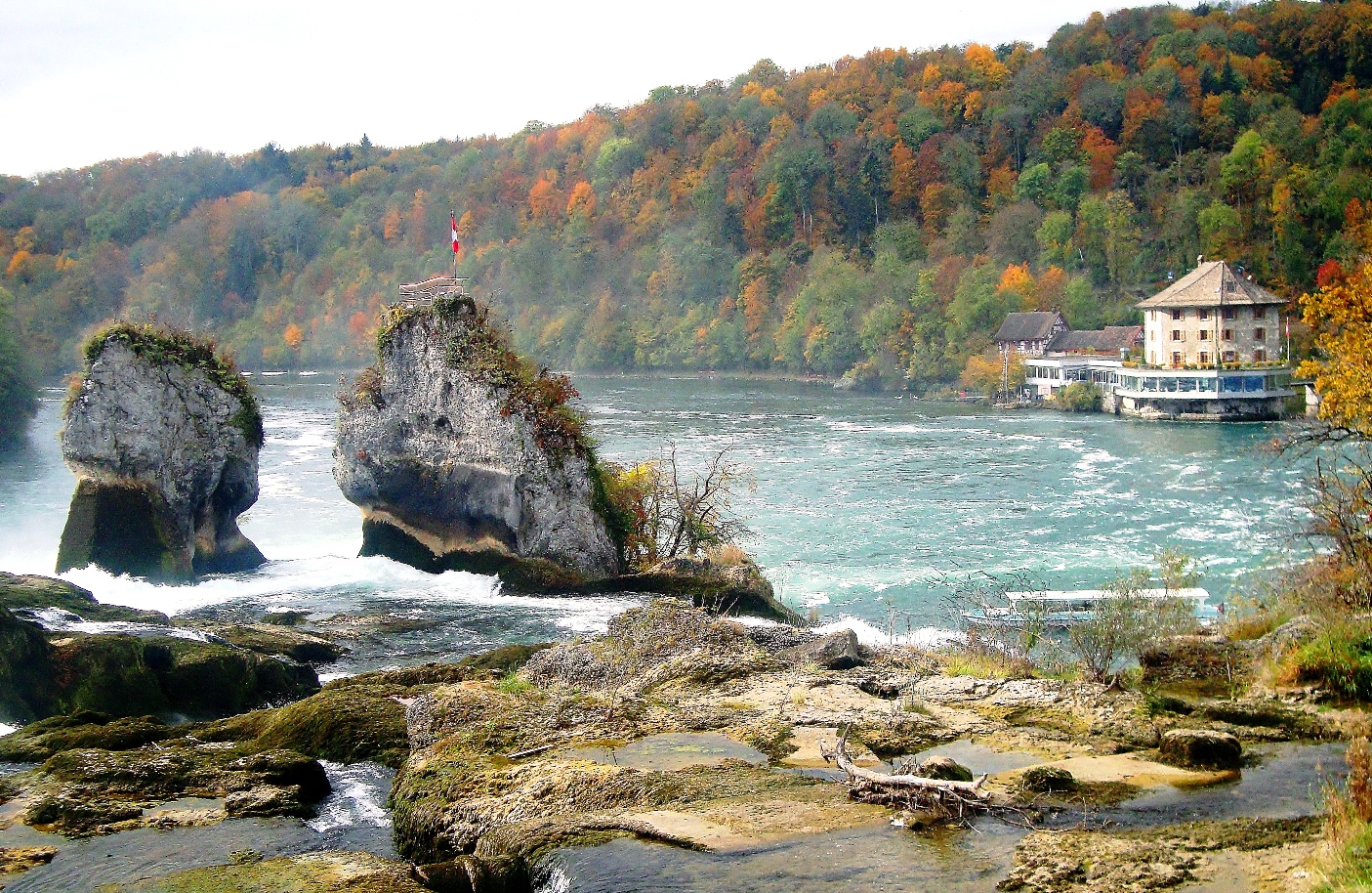 The Rhinefalls' distinctive double rock formation and the largest waterfall in Europe. 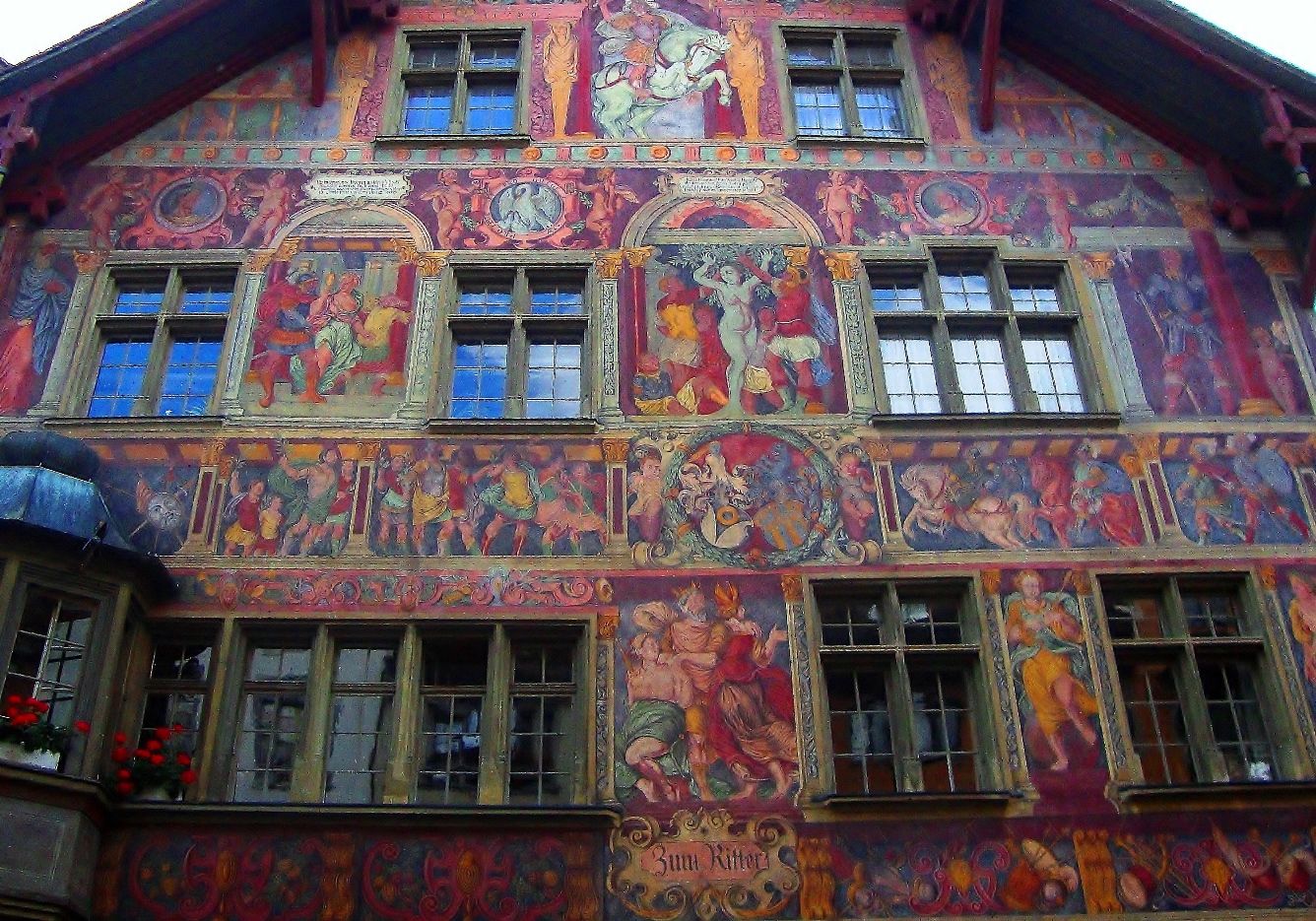 The painted façade of the Ritter Knight house.