A Eurasian Adventure to the Land Where East Meets West

Turkey resides on a continental fault line between East and West, straddling, as it does, both Asia and Europe. Along with Russia, Turkey is the only other country to have territory in both Europe and Asia simultaneously. In my experience it is these crossroads kinds of countries which hold the potential to be the most rewarding for travellers. Turkey is a hybrid, an amalgam, an alloy of differing metals. Istanbul, in particular, is a place where culture, politics and religion intersect, even collide, in the most conspicuous and theatrical of ways. Turkey is the land of the multitudinous minaret, of the iconic red Ottoman carpet, of the obligatory shisha pipe, of the dangerously moreish baklava and of Ali Baba apple tea. I try my hardest to avoid travel writing cliché on my site but this one is unavoidable, I'm afraid: it's true what they say, Turkey is the land where East meets West. This meeting is often amicable, sometimes tense, but always compelling.

Istanbul straddles both sides of the deep blue Bosporus River and at the same time connects East with West, Asia with Europe. A walk across one of the big bridges over the Bosporus magically signals a trip from Europe into Asia - an official journey from one continent to another, a rather special experience which officially sanctions you to claim that you have walked all the way from Europe to Asia and back again. Expect to see Turks of all ages fishing over the balustrades of the bridge on your way across - a common sight and testimony, if any were needed, to the thriving sea life to be found in the river. The deep and rich blues of the Bosporus are vivid and pulsating, acting like a giant blue artery snaking its way through the city. Istanbul's iconic Blue Mosque, is truly otherworldly appearing, to my novice travel eyes at least, not unlike a giant upturned insect on its back with its six legs wriggling in the air. Minarets from a plethora of stunning mosques pierce the blues of the city sky at seemingly every turn. Each minaret, each Call to Prayer, each dome signalling emphatically that I was on the very fringes of two continents and gesturing, uncompromisingly, towards a Middle Eastern way of doing things. Istanbul rides this political, continental and religious fault-line making it among the most unique of city breaks to be had.

For a secular country which does not pertain to support any one religion in particular, the Islamic Call to Prayer was aired with confident regularity throughout the day, starting at 6am. In Britain, church bells toll only on Sunday, meaning we get off lightly in comparison. As a visitor, however, the Call added a visceral soundtrack to our saunterings around the city and drove home the point that Istanbul, although on the surface Westernised in may respects, was most definitely Islamic in its heart and in its soul. Istanbul has one of the best and most dramatic skylines I have seen and its roots at the heart of the Ottoman Empire arguably make it one of the world's most architecturally beguiling of cities; you'll find no soulless glass skyscrapers here. Instead, modest masonry buildings, heritage pieces thousands of years old and a plethora of mosque minarets of all shapes, sizes and hues coexist in a cluttered architectural harmony. 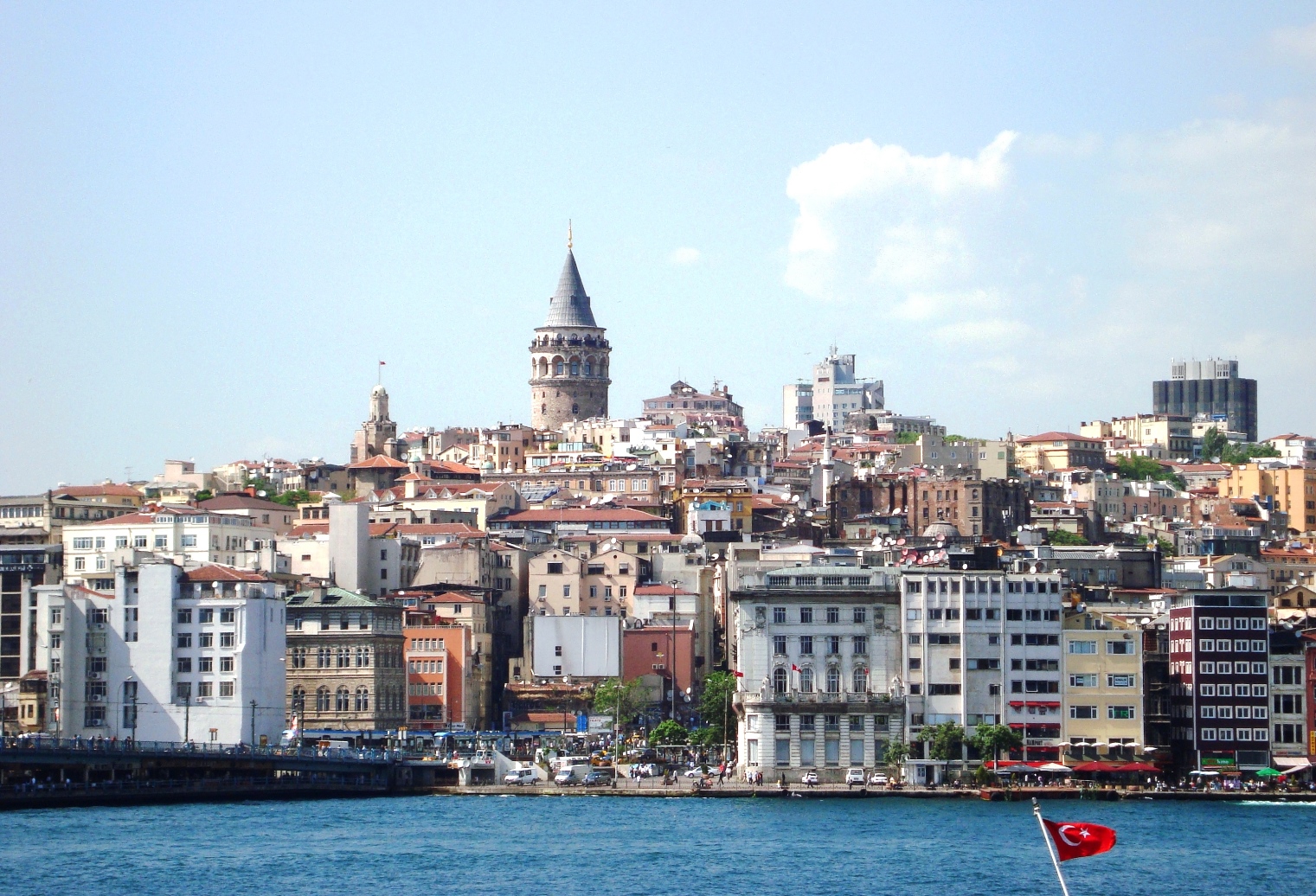 Istanbul, a city nestled along the banks of the mighty Bosporus River. 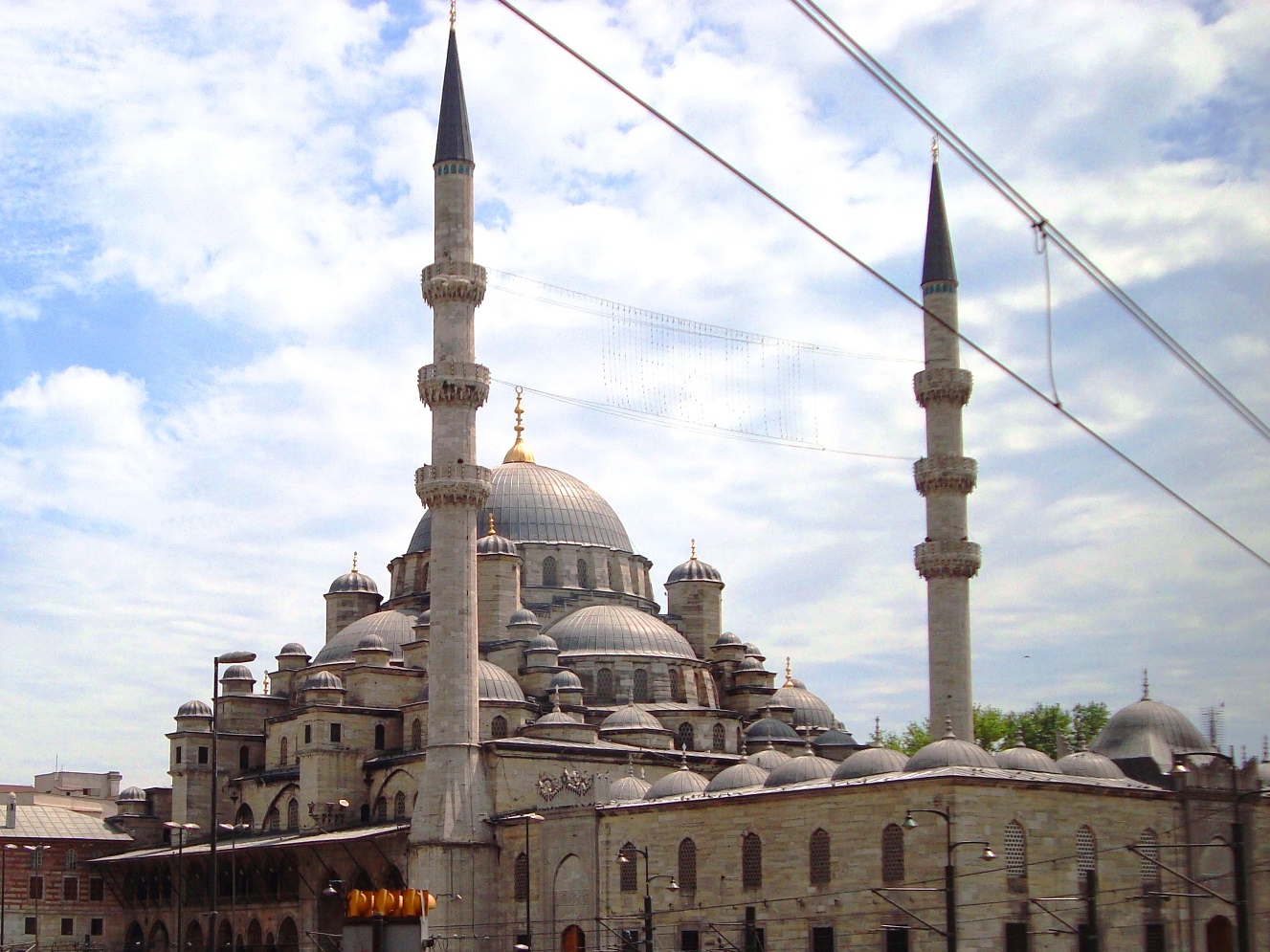 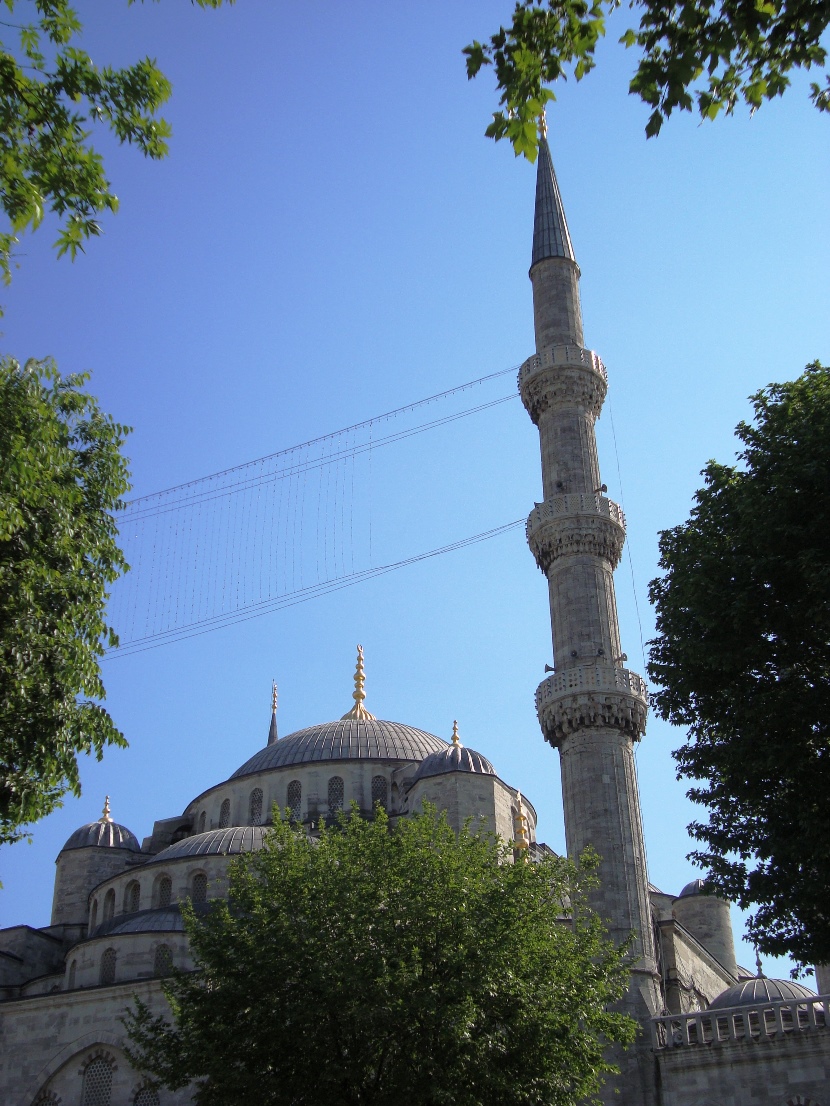 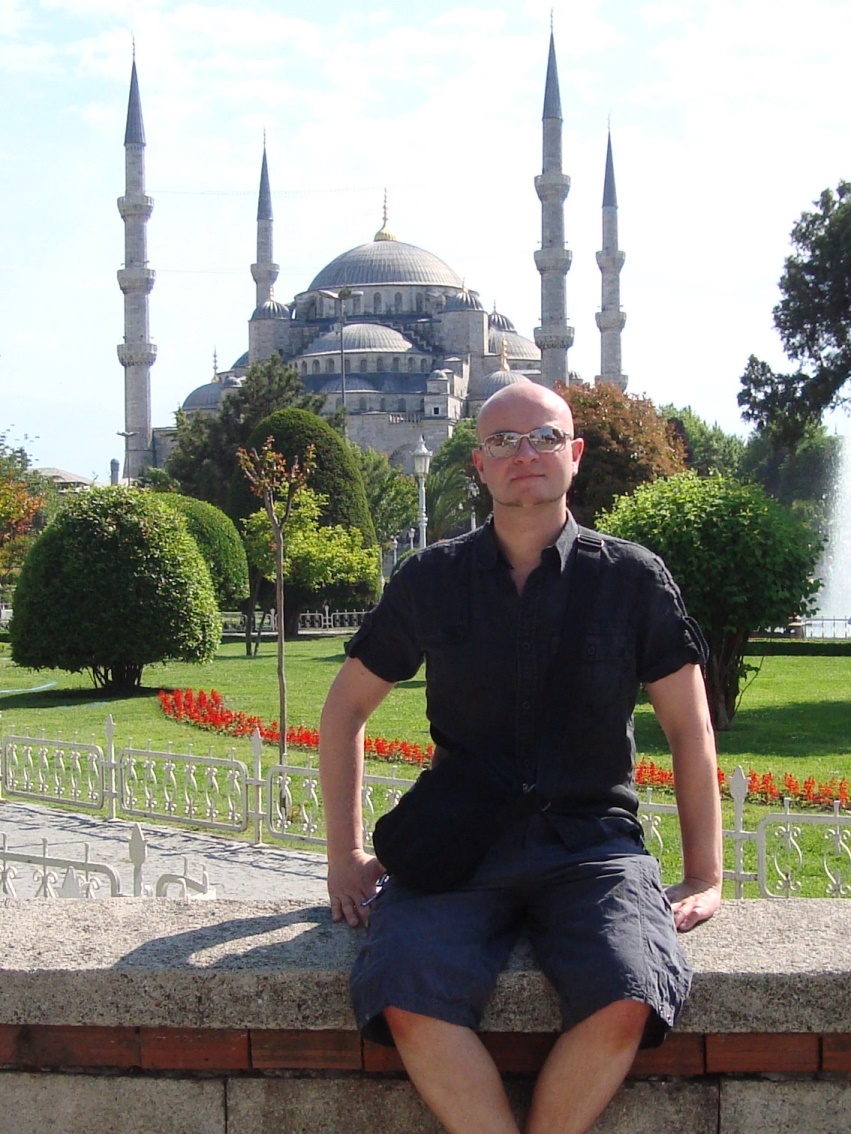 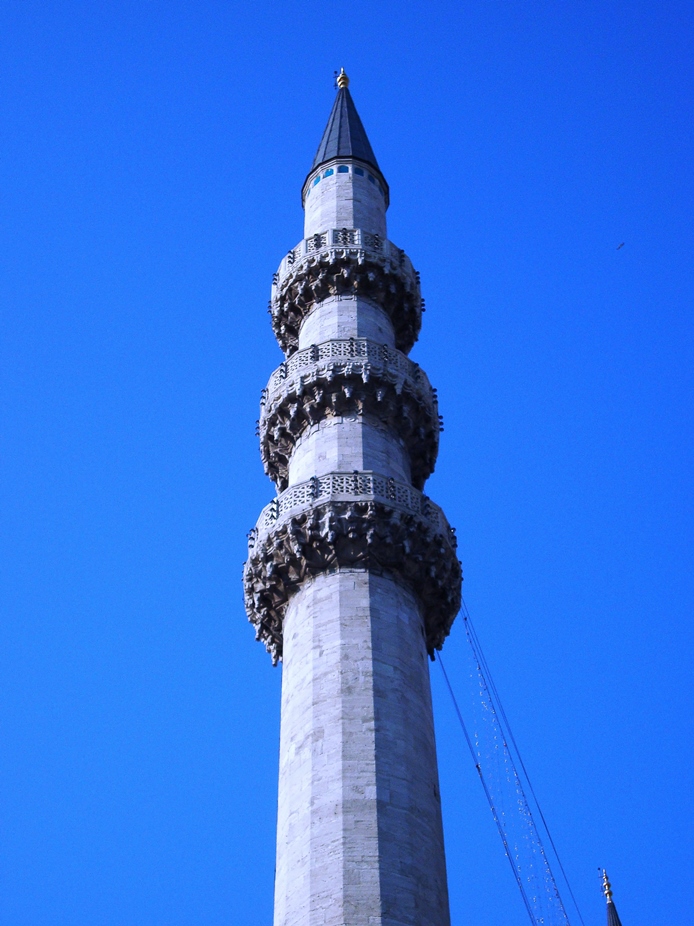 Istanbul: the city of magical minarets. I was completely obsessed with minarets during my time in Turkey; it was the first time I had seen a mosque. 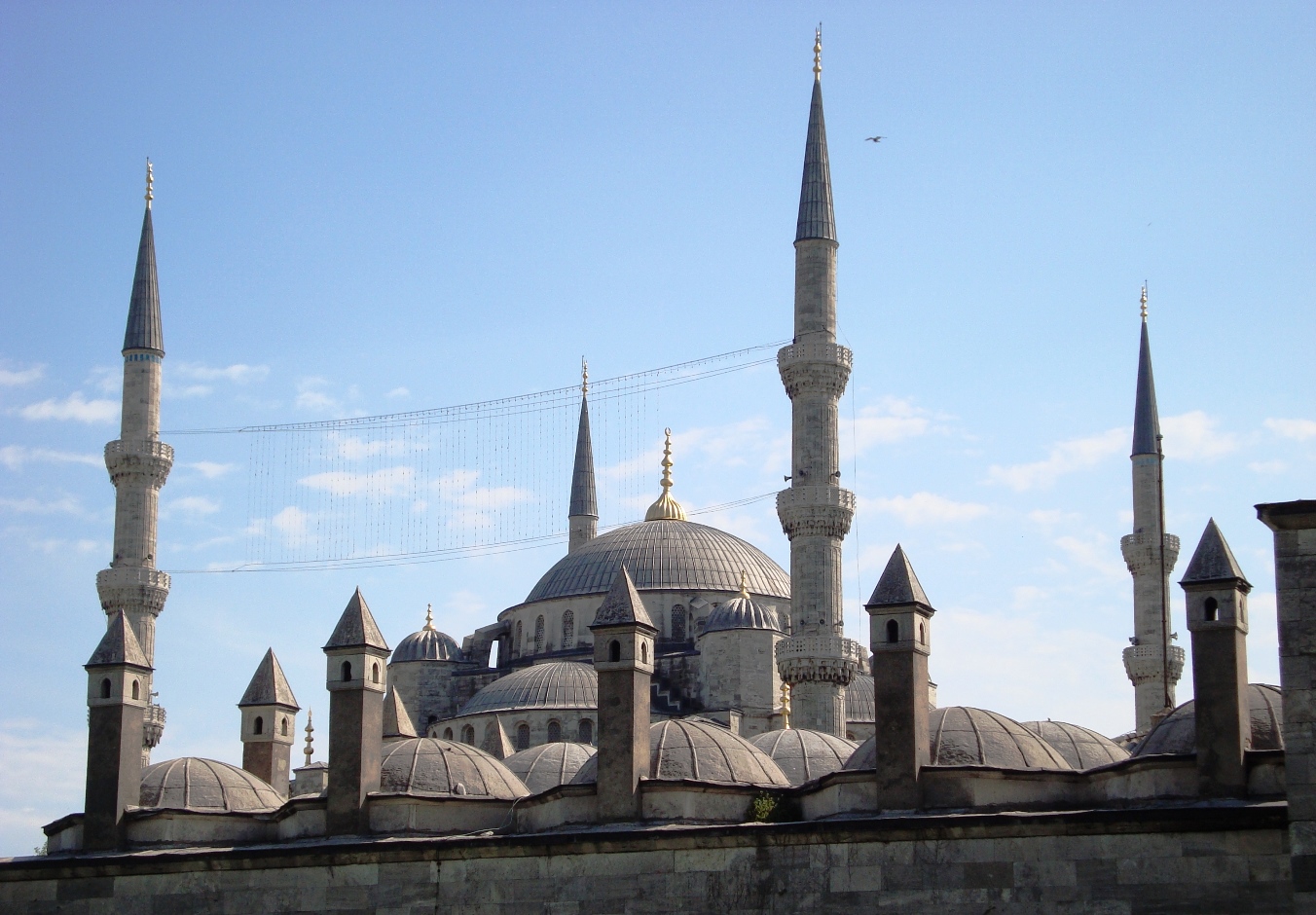 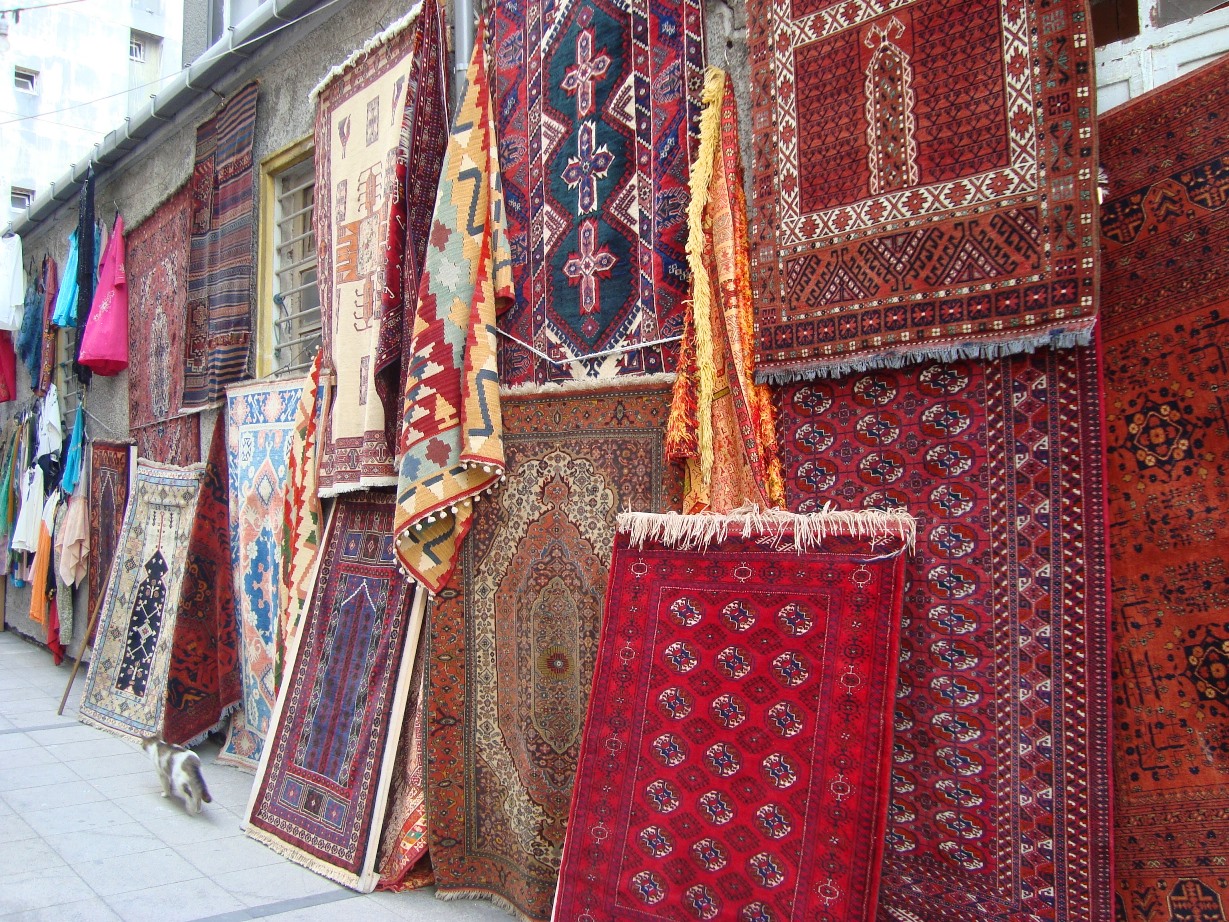 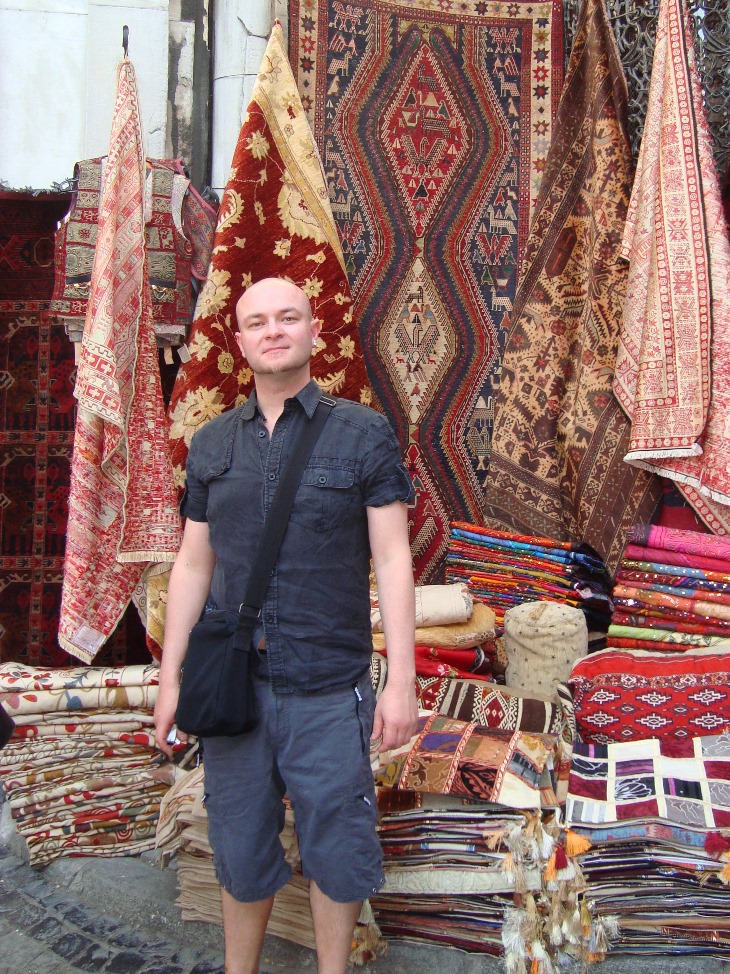 Flying internally on Turkish Airlines, we arrived at Kayseri Airport in Cappadocia and quite possibly the smallest airport in which I have ever been. We stayed in the small French pensione in Uchisar Village, a mere stone's throw from the wild and weird landscape formations of Cappadocia. We arrived at the pensione by transfer, dropped off our bags and set out almost immediately to explore this most magical and uncanny of landscapes. This land of soft volcanic rock, sculpted by intense volcanic activity and the processes of erosion, has resulted in some fantastically surreal cones and turrets. In some areas the resulting shapes appeared not unlike giant dollops of vanilla ice-cream plopped onto the landscape. There's a certain beauty to be found in the truly weird, and Cappadocia has this in abundance. The lunar landscape was not, however, without signs of man for these naturally-formed turrets and stacks had windows and doors sculpted into them and, on the interior, shelves carved into walls. Indeed, these were once home to a population troglodytes. It is perfectly possible to spend hours wandering around Cappadocia taking photographs of the unusual landscape in front of you. We did precisely this and was disturbed only by the presence of a lonely white horse which appeared out of nowhere. We seemingly had this incredible place all to ourselves.

As we wandered further afield, we happened upon a little makeshift café constructed from tree logs and Turkish cloth. It was the valiant effort of an elderly gentleman who was as content as he was kind. The traditional fayre of Turkish apple tea and salty nuts, this little "Shade Tea Garden", so named on a hand-written sign placed at the threshold, offered respite from our exploring and a chance to speak to a local. The gentleman also insisted we wear traditional head dresses as part of the deal; a delightful little experience which was unplanned, unexpected, and unsurpassed.

After a unique take on paella at the French pensione, and a much-needed rest, we awoke the following morning for something even more adventurous: horse-riding. We met up with a pint-sized local man for a journey through the Cappadocian countryside. Although pleasant and getting to see some more of the countryside in central Turkey, the trek was some five hours long and, by the final hour or so, I was in great pain. Indeed, took its toll on my ability to walk normally afterwards. On the final night, we walked up the steep incline of Uchisar Hill, also known as Cappadocia Castle, to watch the sun set over Cappadocia. At 1350 metres above sea level, we were quite frozen by the time the sun had finally set. The sun setting and juxtaposed against the dramatic outlines of Uchisar Hill was a fitting end to our time in Turkey. 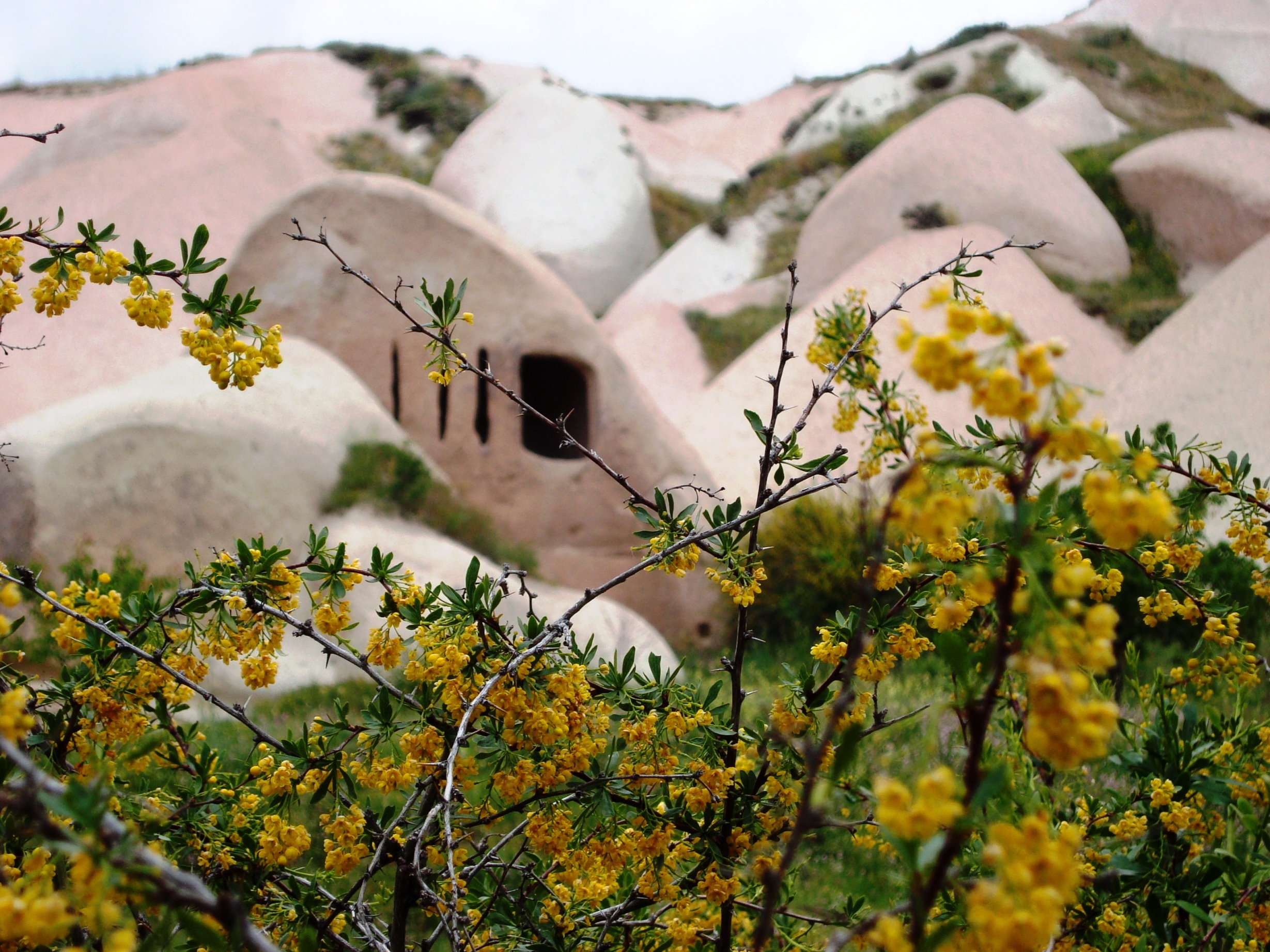 The soft ice cream-like shapes of the Cappadocian landscape, almost lunar in its formations and set off beautifully by the greenery of the countryside. 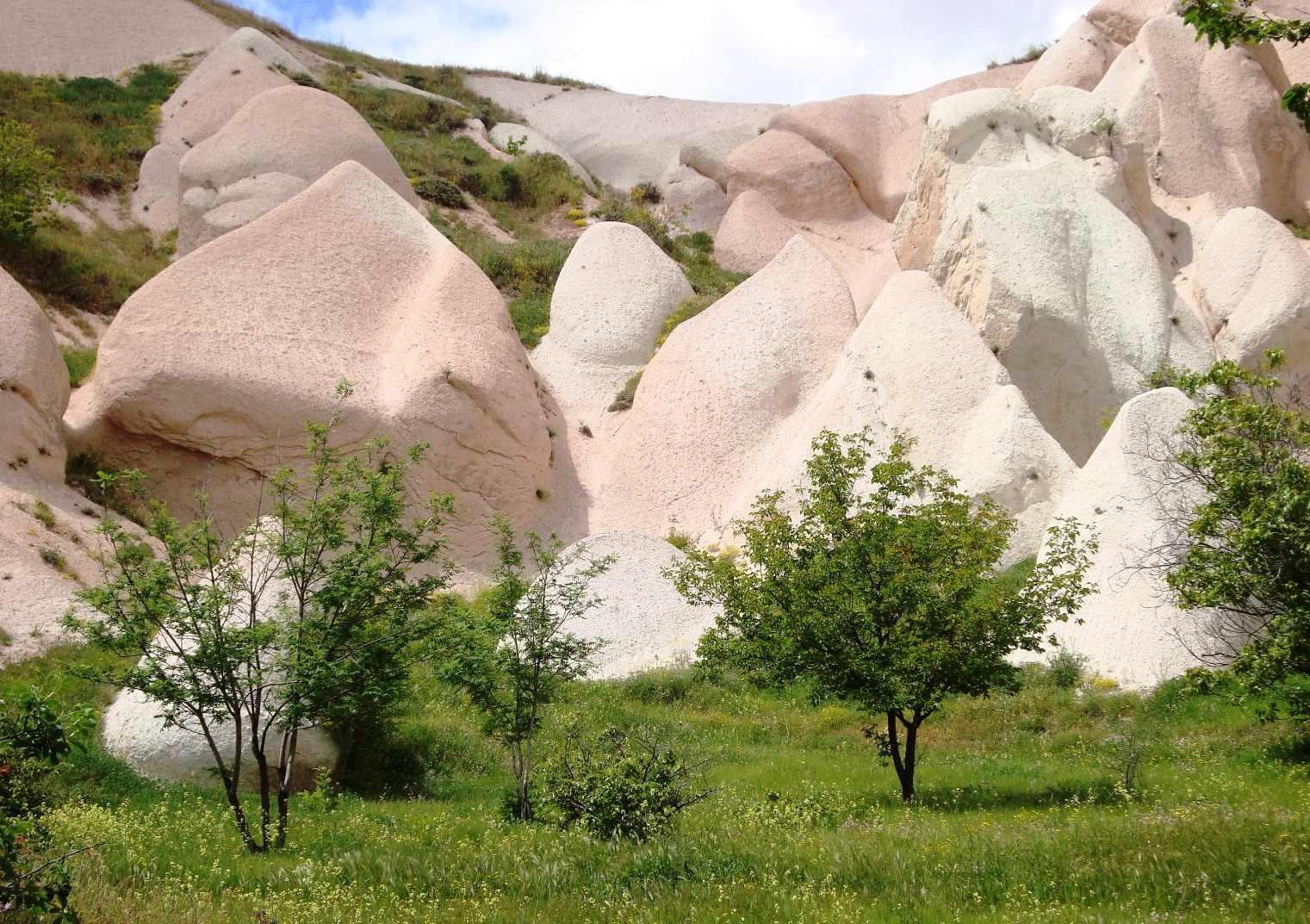 Capoadocia's soft volcanic rock, shaped by erosion into towers and cones, is almost lunar in appearance. 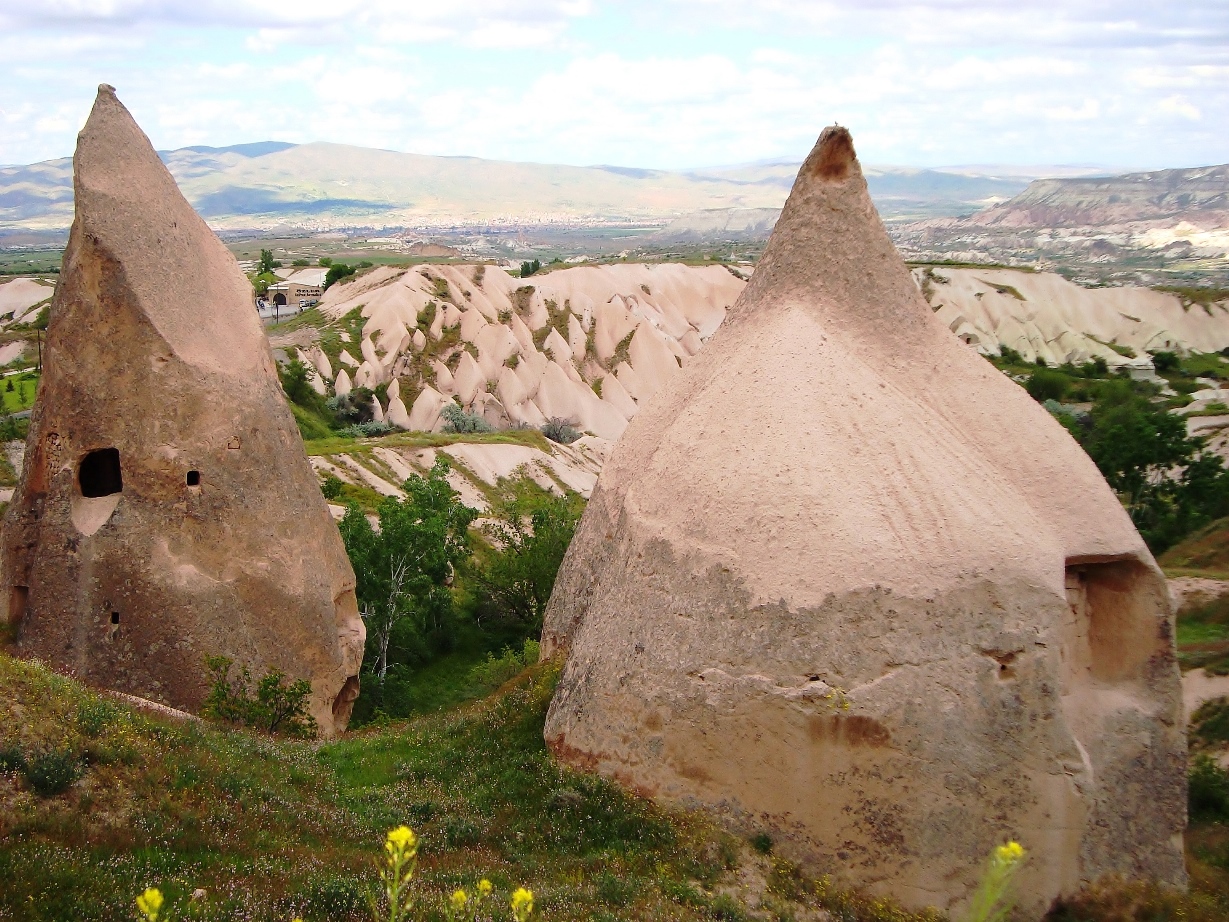 One of the many troglodyte rock homes with their windows and doors carved into the soft rock. It is hard to fathom but someone actually lives in here. 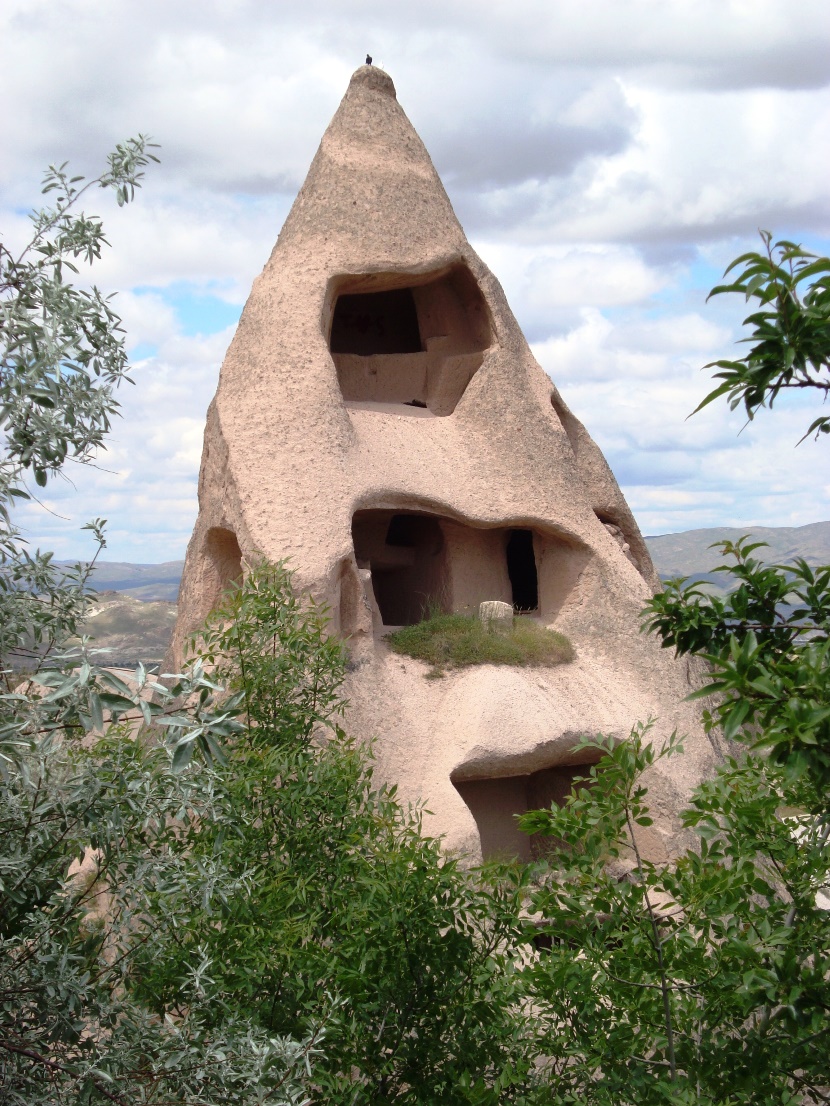 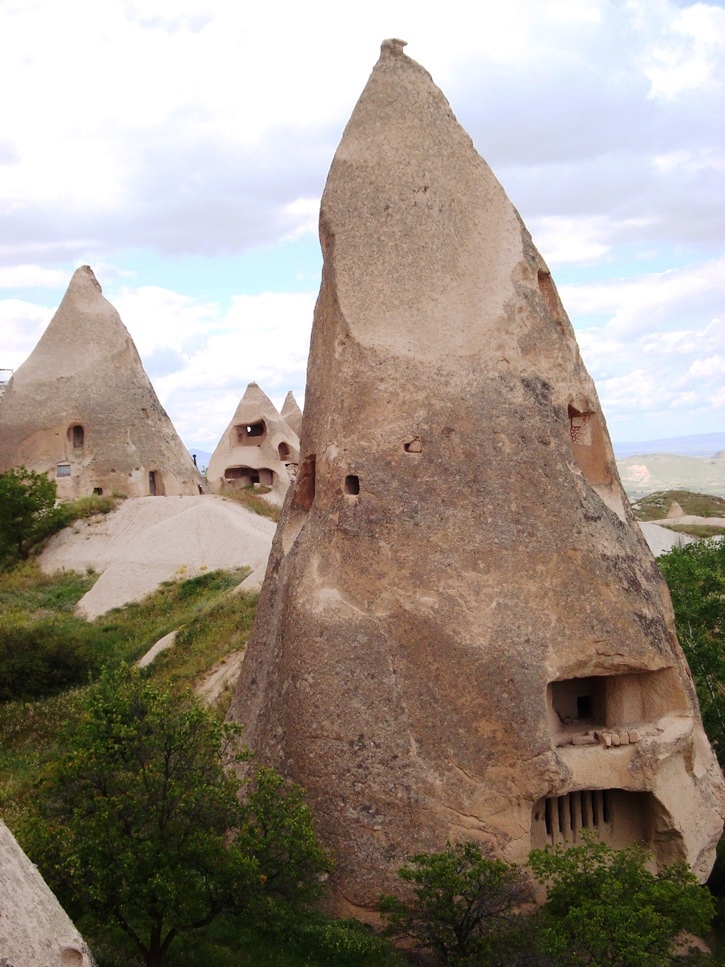 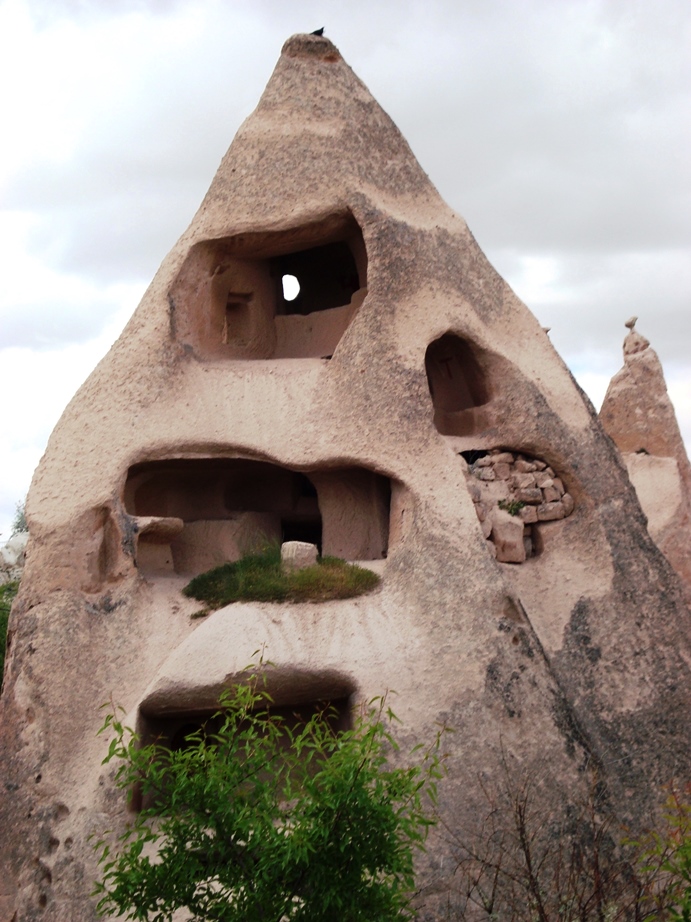 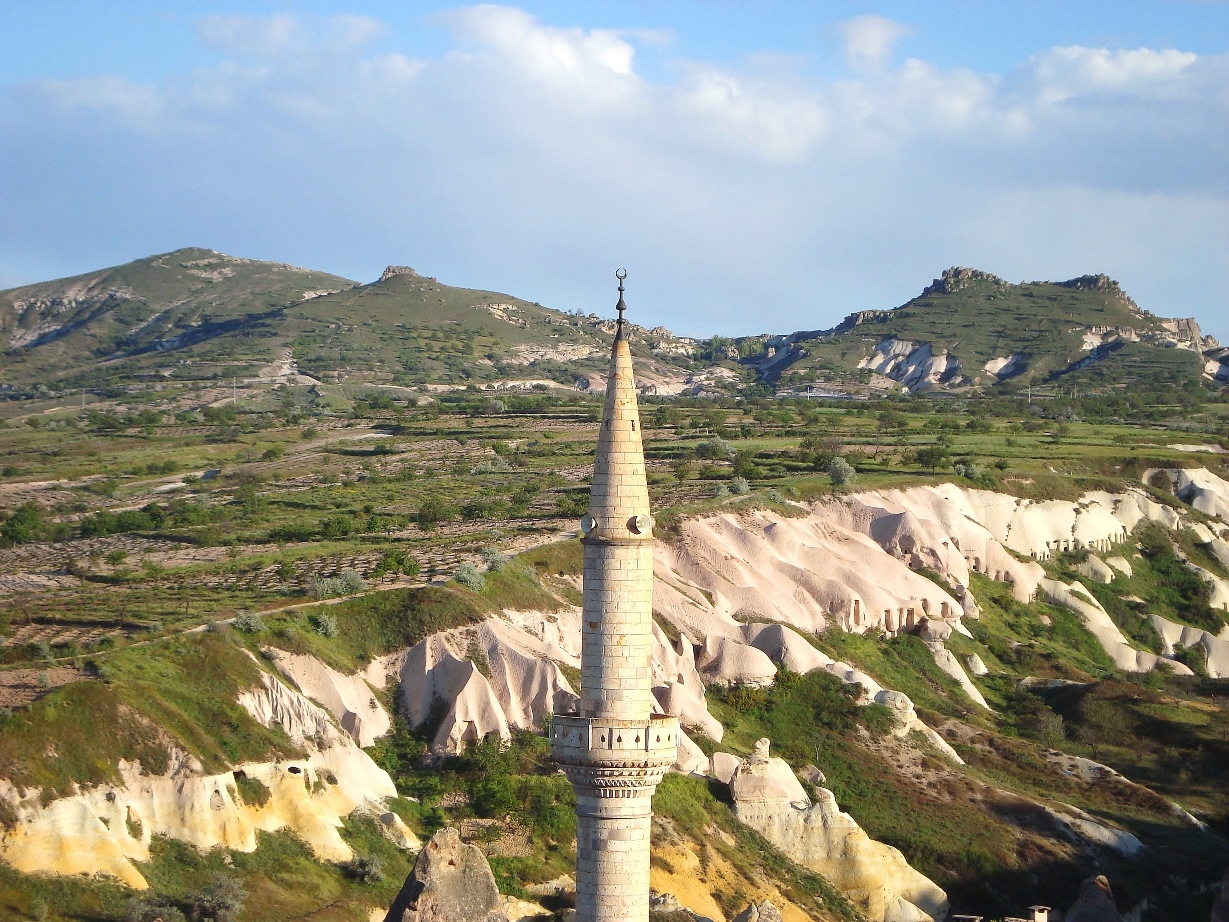 A mosque's minaret foregrounds the dramatic landscape of central Turkey. 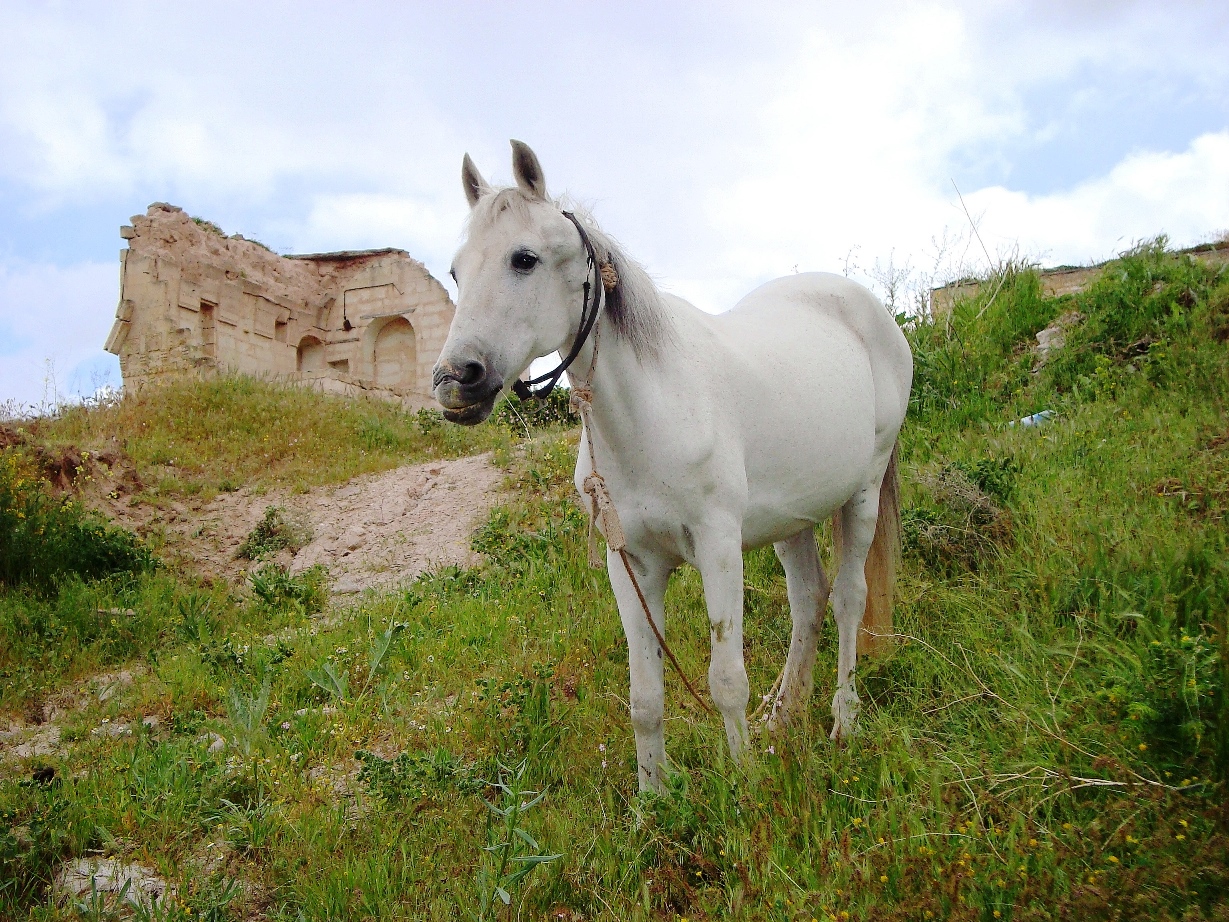 A lonely white horse came out of nowhere to inquisitively greet up. 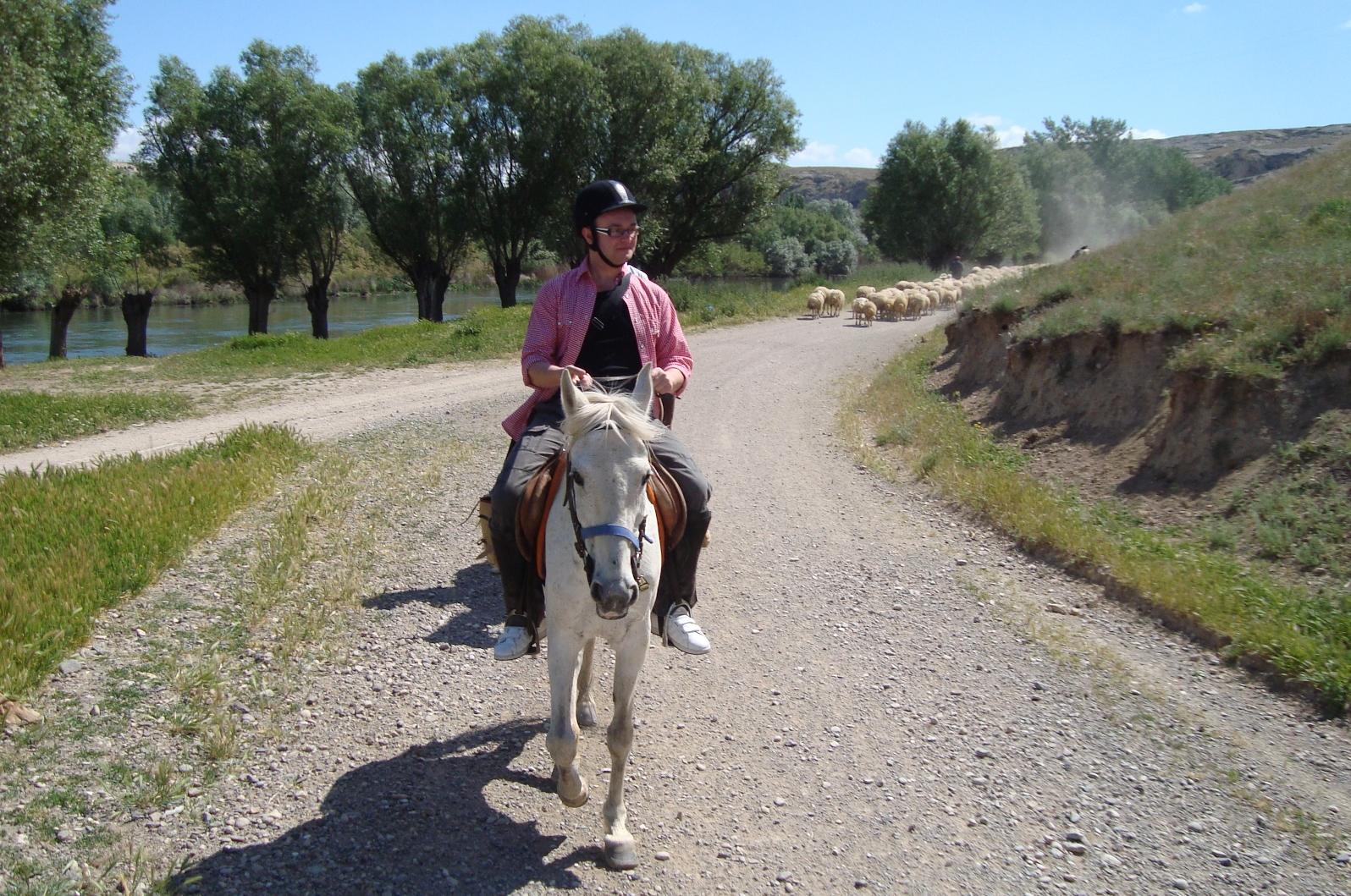 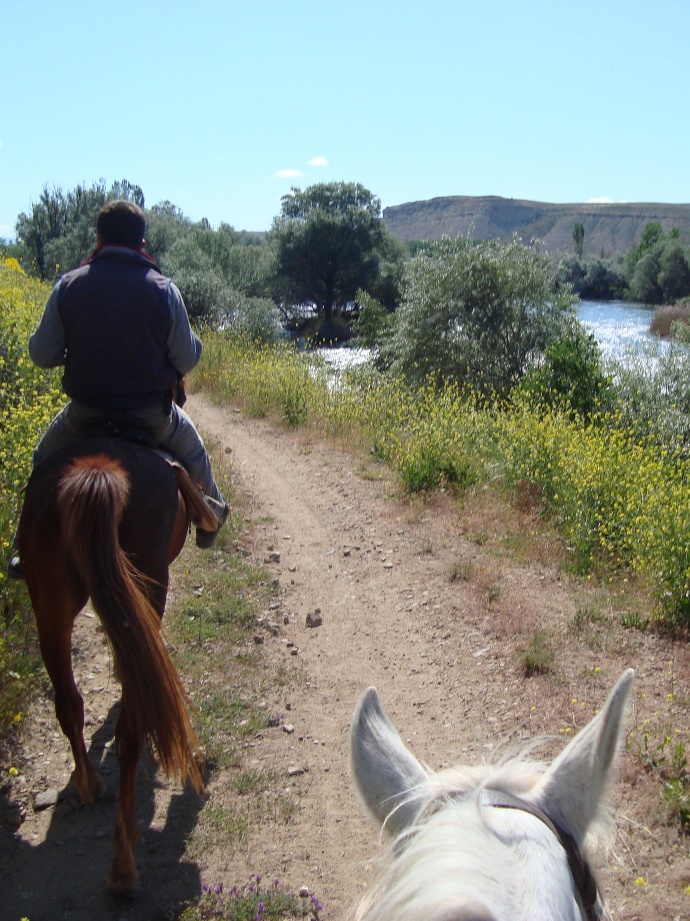 A five-hour horse riding trek through the Cappadocian countryside. 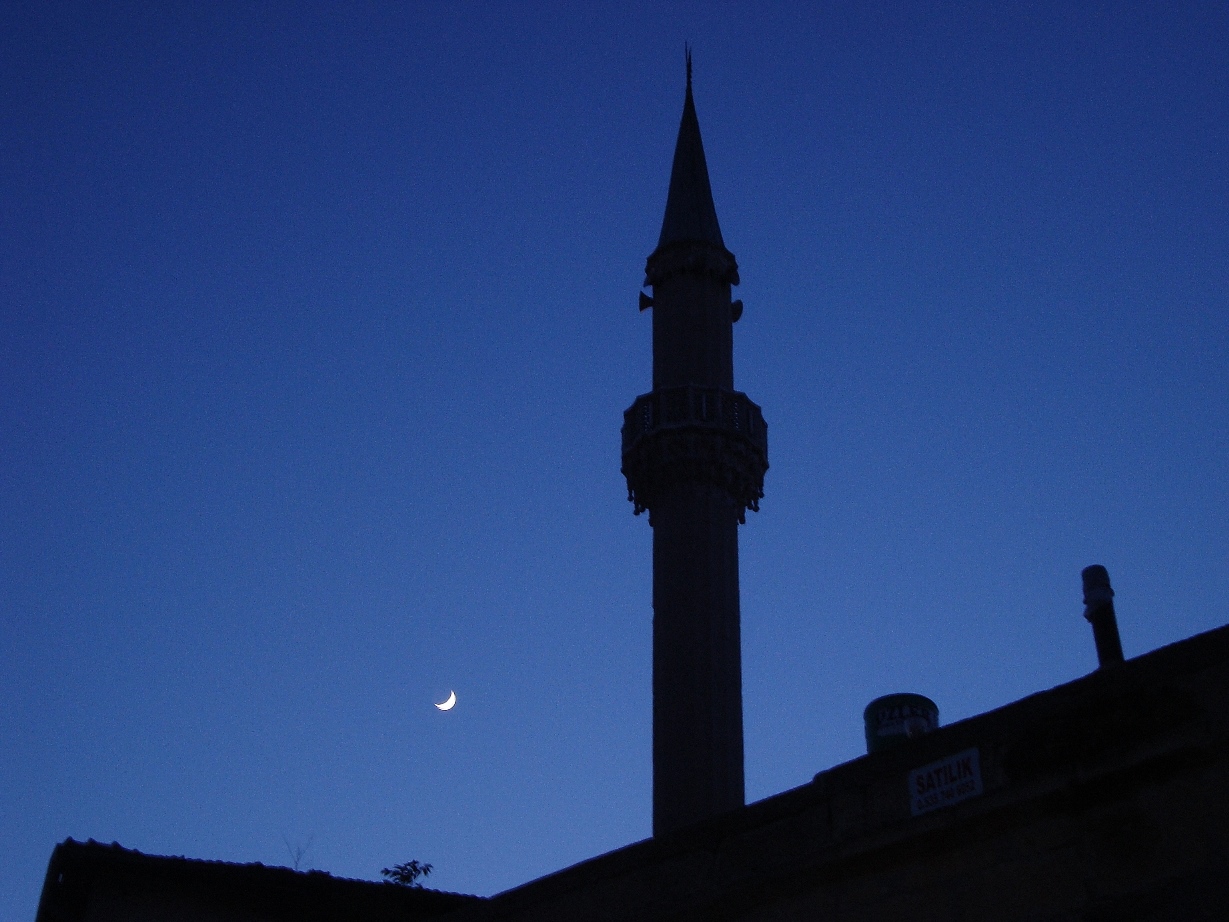 Wonderful night-time views of the village of Uchisar and the minaret of Uchisar mosque. 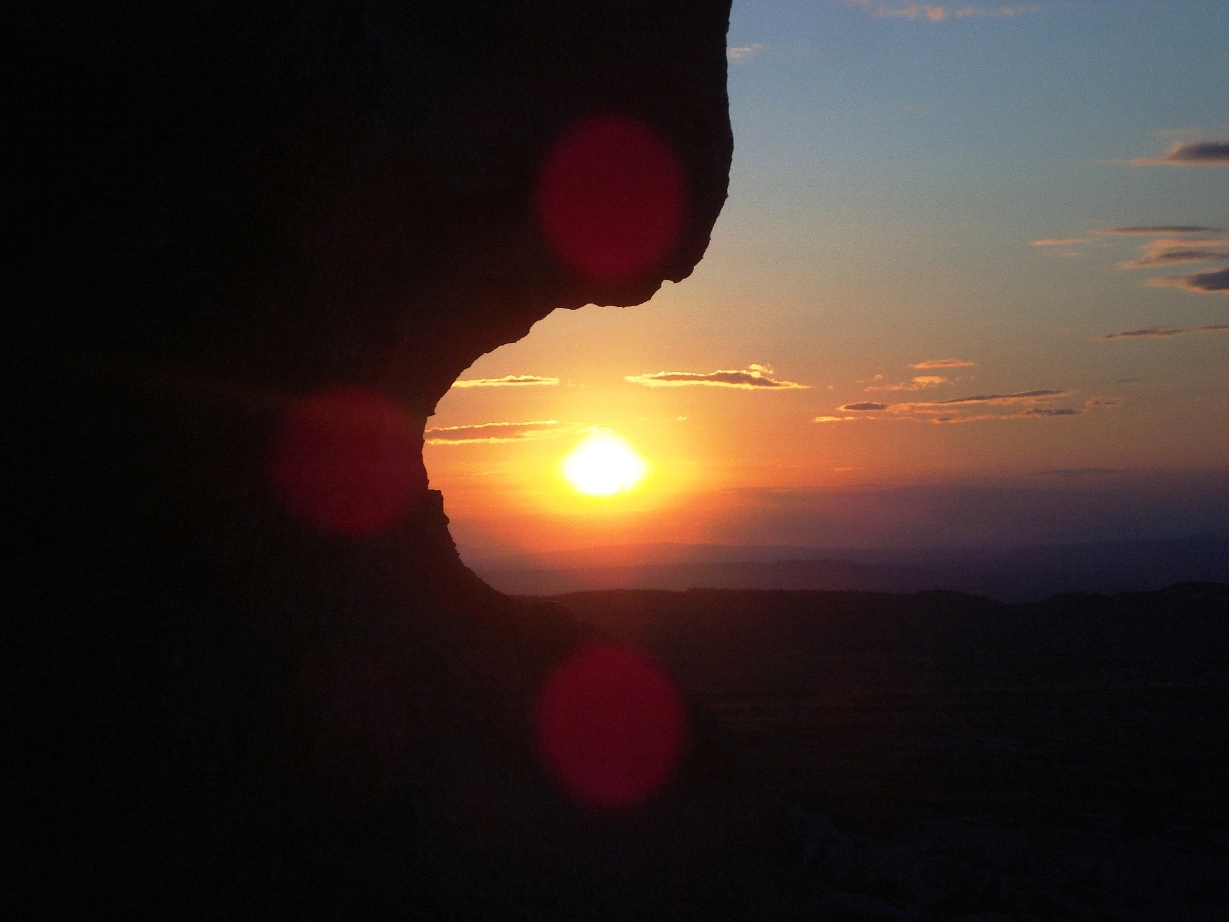 A dramatic rock shape of Uchisar Hill aligns beautifully with the setting sun.